How Christmas trees have evolved in our lifetime 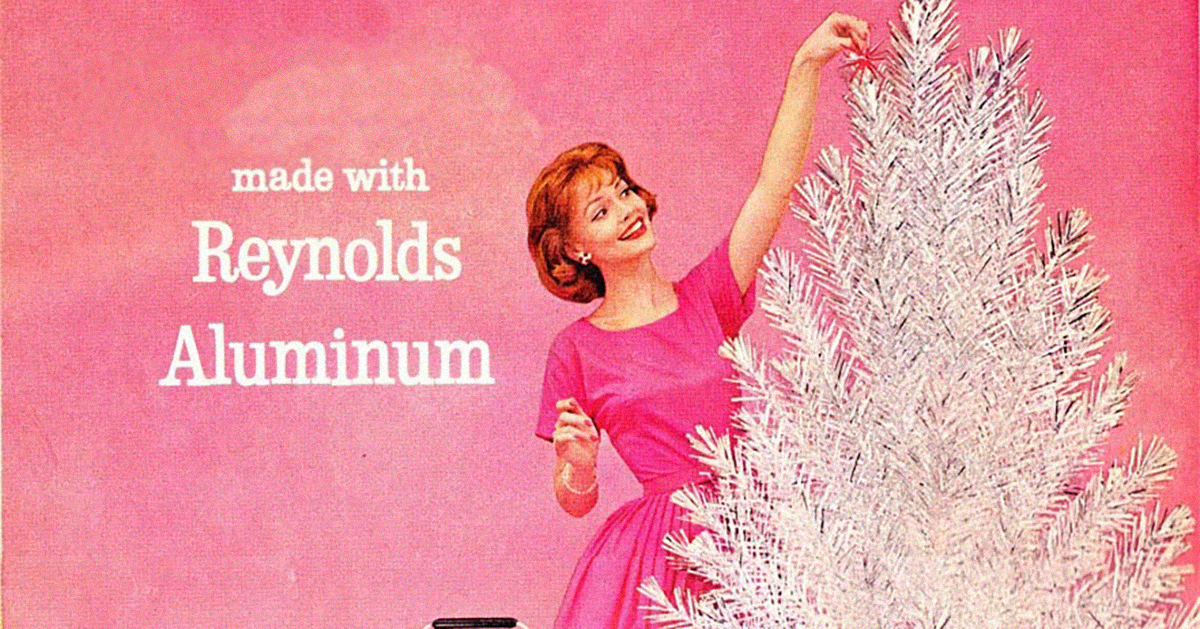 Do you prefer a real tree or a fake tree? It's the Ginger versus Mary Ann debate of Christmas decorating. How you answer the question just might rely on the era in which you grew up. Throughout the 20th century, tastes in tannenbaums changed with the trends of the decades. The postwar era of plastics ushered in a new future of artificial evergreens. Trees changed colors with the times, as the flocking fad came and went.

Television played a major part in the evolution of the American Xmas tree, too. Let's take a brief stroll through the Christmas trees our our past. Which kind did your family have?

1. The first trees of the Boomer generation 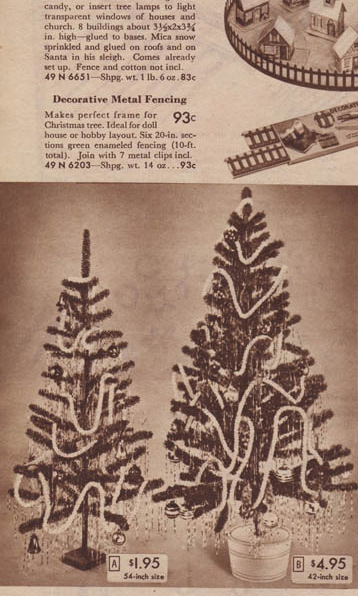 Immediately after World War II, fake trees were quite prevalent in living rooms. The "brush bristle" style had been introduced in the 1930s. Many in our Boomer audience may have grown up with one of these very Sears trees. The silvery garland winds itself like a snake around these phony spruces. For a little more more, the catalog shipped the trees in a white wooden bucket. The tree on the right cost $4.95 at the time, which translates to about $54 in today's cash. 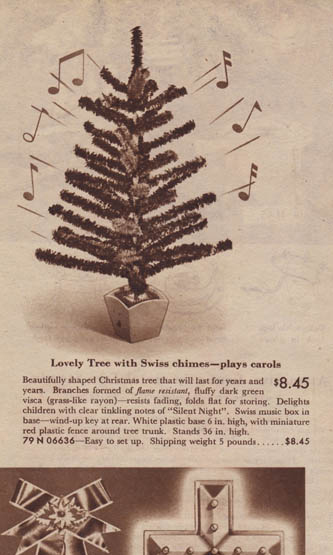 This also comes from the 1947 Sears catalog — a chiming tree that tinkled "Silent Night." It was made from flame resistant, "grass-like rayon." That's perhaps the only time someone called rayon "grass-like." 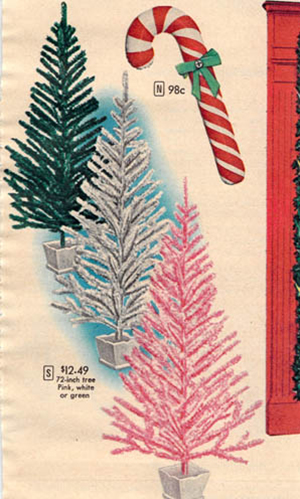 In the Eisenhower Era, pink kitchens were all the rage — pink refrigerators, pink stoves, pink countertops. The color palette spread its way to the yule, as cotton candy–like Christmas trees added a bright pop to the front windows of our mid-century ranches. The all-white tree was another popular option.

4. The future was bright. 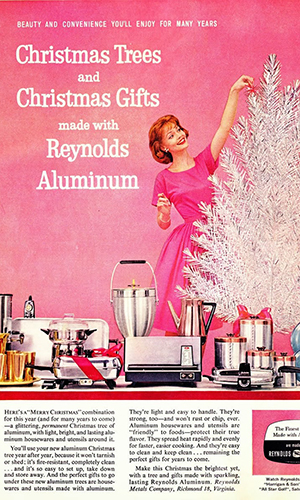 "Something new and outstanding in the way of Christmas-tree decoration can be had by using an ordinary insect gun to spray aluminum paint on the tree." So proclaimed a 1937 issue of Popular Science. That sounds rather, um, hazardous, to say the least. No worries! Fully aluminum trees were made commercially available in the mid-1950s. This space-age Reynolds ad from 1960 touts the futurism of its metalic tree. It was just like a toaster! Nothing twinkled quite like an aluminum "evergreen." Eversilver?

5. Why settle for just green? 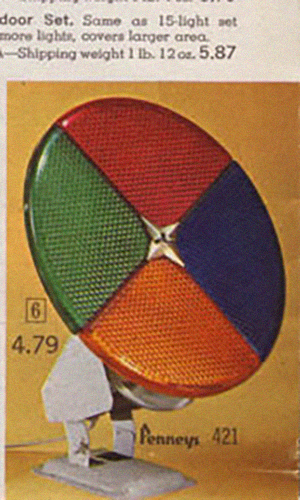 Of course, no aluminum tree was complete without a rotating color wheel, like this one seen in a 1960s JC Penney catalog. The spotlight turned your Christmas scene into a veritable discotheque. We reached peak "Fake Tree Phase" here in the early 1960s. That would all change with a classic, charming Christmas special, as we'll get to in a bit… 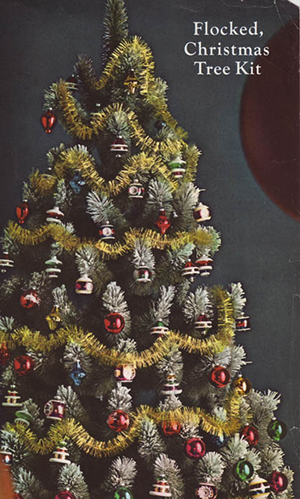 At the height of the fake tree craze, one could find trees in pink, white, silver, purple, gold and more. As man-made materials dazzled the modern man, many opted for the flocked look, which covered the bristles in a chemical white powder. You could also buy it in an aerosol can. The canned stuff probably wasn't great for us.

7. Blame it all on Charlie Brown. 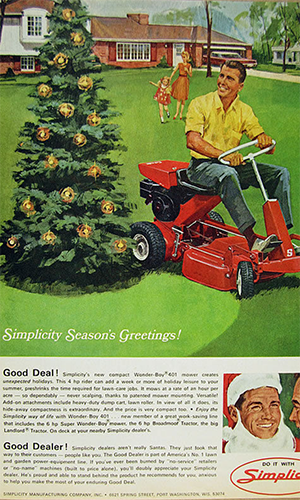 "Snoopy" was not a word used kindly around the Reynolds offices in the late 1960s. A Charlie Brown Christmas first aired in 1965, and as we all fondly recall, the Peanuts gang proclaimed a real tree — even a scrawny little thing — to be superior to the phony plastic and metal trees of the day. This had great impact on the real-world Christmas tree market, as families suddenly opted for the Charlie Brown look. As this 1966 lawnmower ad shows, it was suddenly all about the natural tree.

8. But the fake tree was not dead yet. 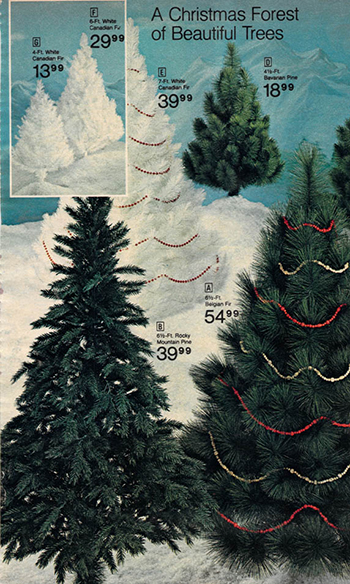 As real trees became more popular, the plastic ones went for a more natural look. The branches were fuller, the needles more realistic. You could easily count the bristles on those fake trees from the '40s and '50s. These babies from the 1977 Sears Wish Book made houseguests lean in and take a sniff, they looked so real.

9. Nostalgia, and convenience, kicks in. 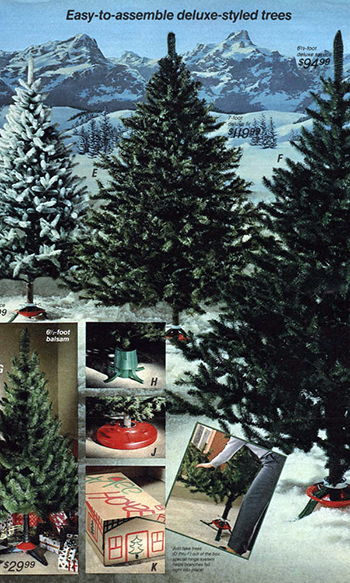 This page from Sears, 1986, shows people were starting to yearn for the flocking and artificiality of their youth. The fake trees could pop open like an umbrella — perfect for easy storage in your attic! While still more realistically thick, they had a seemingly perfect conical shape.

SEE MORE: 5 THINGS YOU MIGHT NOT KNOW ABOUT TINSEL 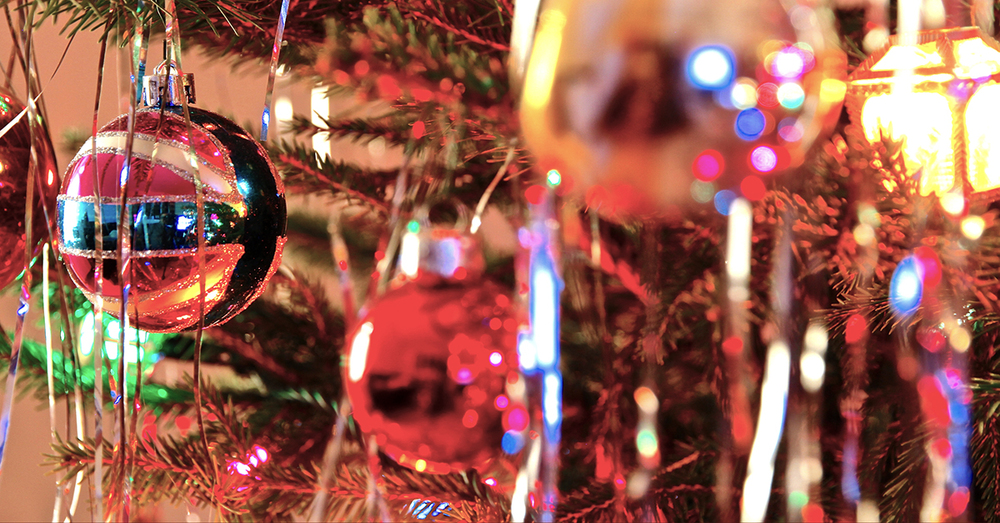 Now, of course, we have to decorate the tree. Let's look at the silvery strands that were so common. READ MORE