Where To Watch Shop Store Contact
Home / Stories / 7 sharp-dressed facts about Bat Masterson
Did you know?1950sWesterns

Gene Barry played the most dapper man in the Wild West. 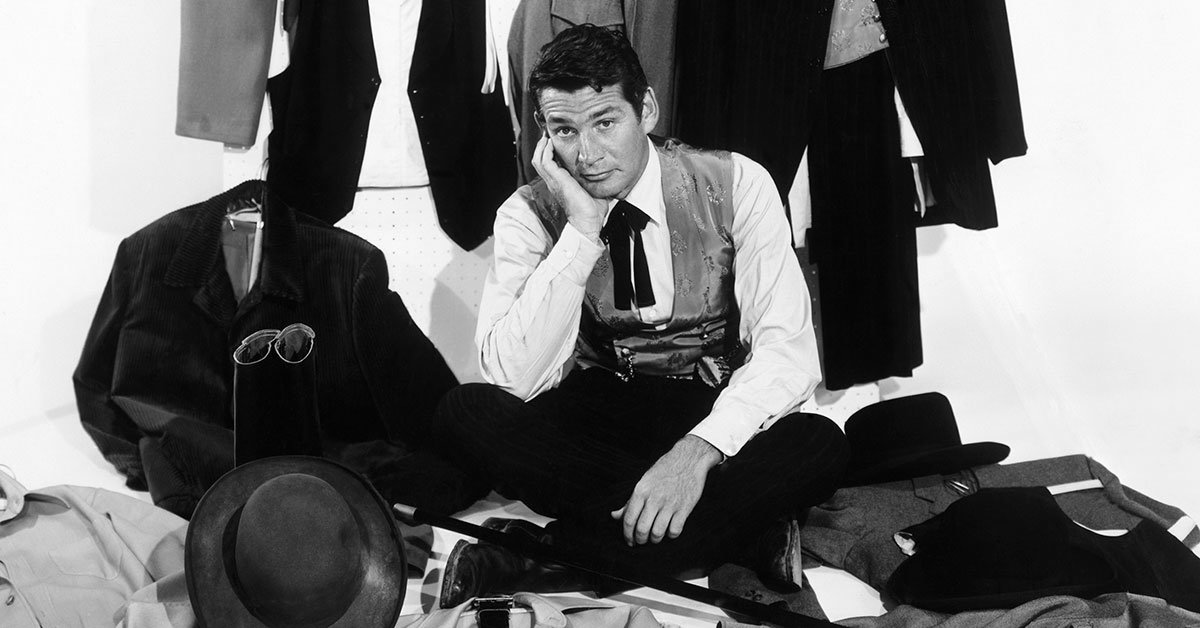 Not all cowboys were dusty roughnecks in denim. In the heyday of TV Westerns, Bat Masterson offered a different kind of hero. From 1958–61, Gene Barry played the title character, a lawman suited in the most expensive threads. He preferred to carry a hat and cane over a pistol, though the theme song did let you know he was "the man who had the fastest gun."

Let's take a closer look at this unique spin on the classic Western adventure.

1. The Western was based on a real man. 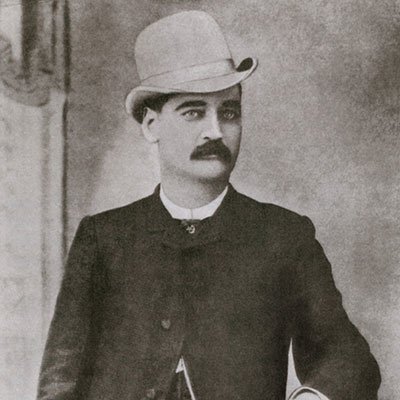 Bat Masterson was one of the most fascinating men of the Wild West if not all of 19th-century America. For starters, he was Canadian, born in Quebec. As a teenager, he moved with his family to the Great Plains to hunt Buffalo. He eventually became the sheriff of Dodge City, Kansas, where he engaged in shootouts; participated in the railroad wars. He became an expert and sportswriter on boxing, palling about with prizefighters and starting a boxing club. He became a journalist in New York City, where he was briefly arrested for a con. He served as a bodyguard to a Denver millionaire. He befriended President Teddy Roosevelt, who appointed him a deputy U.S. Marshal. He generally impressed everyone with his sartorial and gambling skills. No wonder they made a show about him! 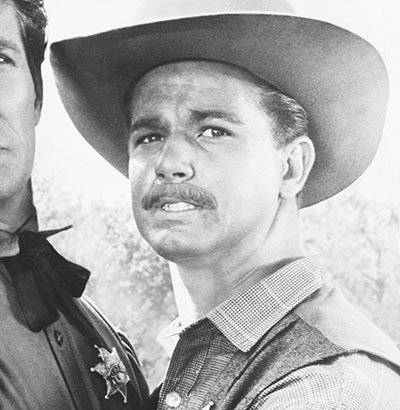 In fact, Bat Masterson was such a fascinating figure, you could find him on two TV shows in the late 1950s. Of course, Gene Barry was starring as the title character on Bat Masterson beginning in 1958. That same season, Mason Alan Dinehart was wrapping up his role as a younger Bat Masterson on The Life and Legend of Wyatt Earp. Dinehart left acting in 1960 for a career in law.

3. Gene Barry honed his character on Our Miss Brooks. 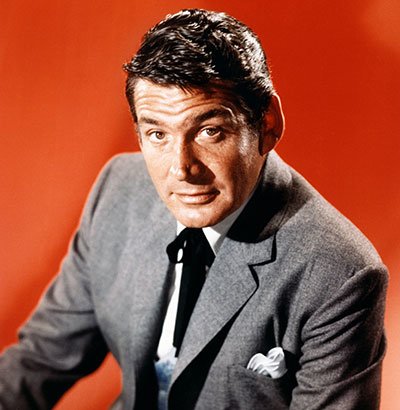 Gene Barry became typecast as suave, sophisticated men. On Burke's Law (1963–66), he was a debonair millionaire who solved crimes from the back of his chauffeured Rolls Royce. Later that decade, he landed a lead role alongside Robert Stack on The Name of the Game, playing the sophisticated and sharp-dressed publisher of Crime magazine. But Barry truly perfected this type of man on a sitcom, Our Miss Brooks. He joined the cast from 1955–56 as the love interest to Eve Arden's main character. He played a sophisticated gym teacher named Gene! 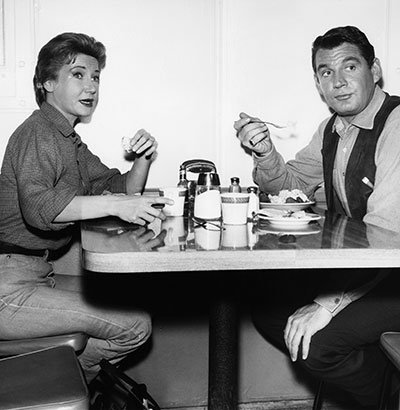 Betty Barry popped up on TV rarely alongside her husband. She can be seen in the episode "No Amnesty for Death." Here, the two are eating in the cafeteria during production. Later, she appeared on an episode of Burke's Law. 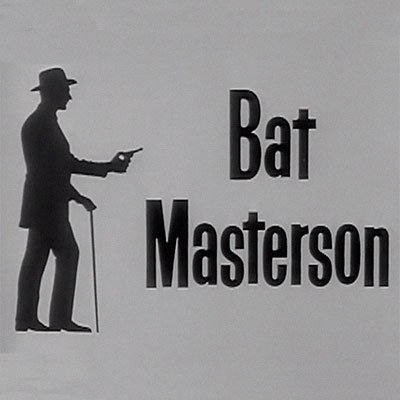 Every Bat Masterson episode ended with a baritone coming in over the closing scene. "Back when the West was very you-u-u-ung!" the voice boomed. "He wore a cane and derby hat!" The singer was Bill Lee, who can be heard in dozens of delightful Disney classics. He was the singing voice of Shere Khan in The Jungle Book. He sang in Mary Poppins, Lady and the Tramp, Peter Pan, Alice in Wonderland and more. He recorded Disney records like "Puff the Magic Dragon."

6. Barry returned to the role in the Nineties. 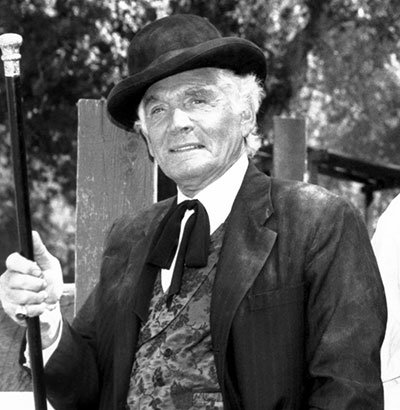 The overlooked 1988–91 cowboy series Guns of Paradise (also known as Paradise) relished paying tribute to the golden stars of classic Westerns. Chuck Connors (The Rifleman) turned up in a few episodes. Gene Barry donned his derby and cane to reprise his character Bat Masterson in the episode "A Gathering of Guns." He appeared alongside fellow legend Hugh O'Brian, former star of The Life and Legend of Wyatt Earp. Of course, you now know that his show featured a different actor as Bat!

7. There was a comic book and a newspaper comic strip. 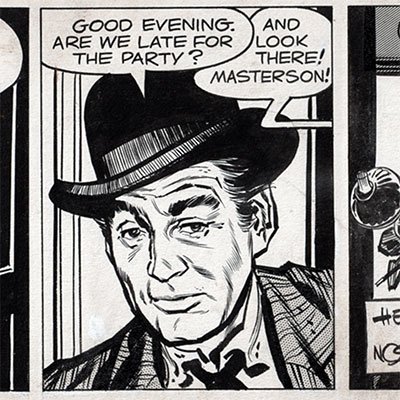 Bat was as big as, well, Batman in the late 1950s. The TV show itself was based on Richard O'Connor's bestselling 1957 biography of Masterson. In fact, the closing credits showed a shot of the book at the end. It all peaked in 1959. That fall, Dell Comics published a comic book. If you didn't pick those up at the local drugstore, you could read Bat's adventures in the newspaper funny pages. Yep, there was a daily comic strip, too!

teire 34 months ago
Really liked Guns of Paradise, the last of the old fashioned traditional Western series that I recall. (Loved Bristol County more, but that show was a mind meld of genres, and so good at it!)
Like Reply Delete 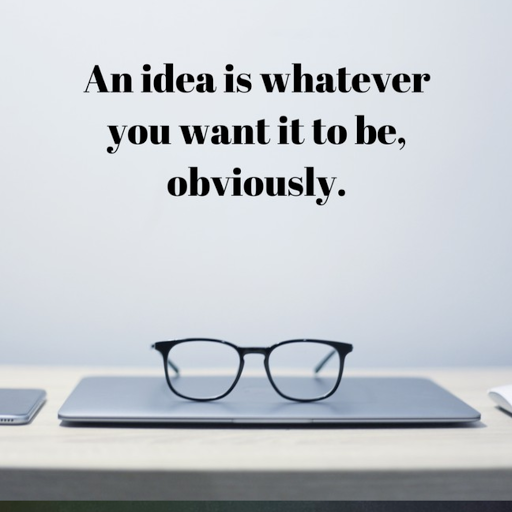 kbrock teire 23 months ago
I think you may mean, "The Adventures of Briscoe County Jr." But yes, that WAS a bit of a mind meld of genres to say the least. I loved that show so much. I wish I could find it again.
Like Reply Delete

teire kbrock 23 months ago
Yes, thanks, that was an autocorrect! Great show.
Like Reply Delete

cperrynaples 34 months ago
Gene Barry's OMB character was a mistake, viewers preferred Mr. Boyton so Robert Rockwell came back! Barry wasn't even mentioned in the OMB movie!
Like Reply Delete

MrsPhilHarris cperrynaples 34 months ago
I don't remember him on OMB. Must be the TV show not the radio program.

I do wonder why she had any interest in Mr. Boynton.
Like Reply Delete

cperrynaples MrsPhilHarris 34 months ago
Yes, OMB began on radio with Rockwell but not Barry!
Like (1) Reply Delete