15 bygone breakfast items you will never have again

Bacon and danishes, fresh from your toaster! 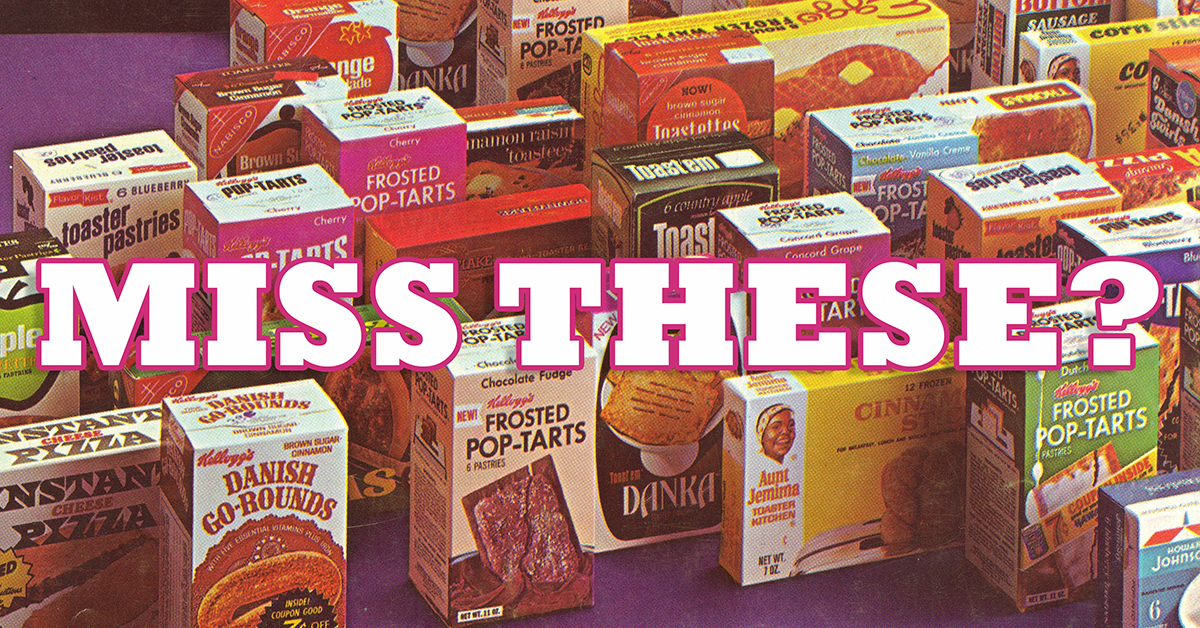 Breakfast is the most important meal of the day, as our parents and Saturday morning commercials would always tell us. So you have to eat something hearty and healthy. Like a bunch of bacon and danishes stuffed in your toaster.

At least, that's what was on offer in the 1970s. Back in the day, all sorts of food could be popped into your toaster, from pastries to pork.

We have previously looked at all kinds of bygone breakfast cereals. Now let's dig up some other beloved grocery items you will (probably) never have again. Which was your favorite? 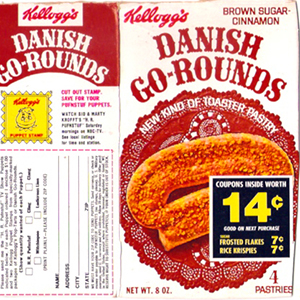 Even if you never had one, it's hard not to feel nostalgia for this delicious toaster treat. Kellogg's boldly declared Danish Go-Rounds to be a "new kind of toaster pastry." You could cut out stamps and send away for H.R. Pufnstuf puppets, too, back when these babies appeared circa 1970. 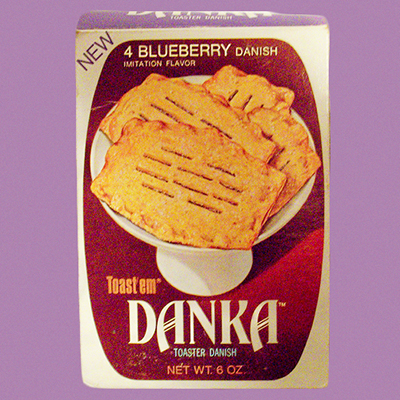 As you can see, the toaster danish market was once robust. Today, it's nothing but Tarts. We have minor gripe with this Toast'em product, however. The Danish say "Tak," while Germans say "Danke." But we have to admit, "Danka" sounds better on a box than "Tak." 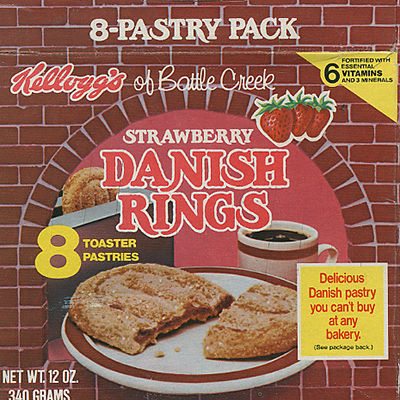 Kellogg's found the middle ground between its Danish Go-Rounds and Pop Tarts with these fruit-filled goodies. 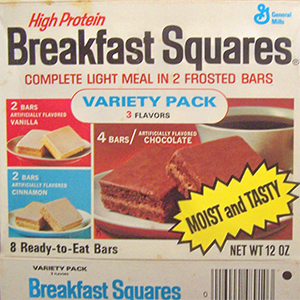 General Mills offered these "moist and tasty" bars in Cinnamon, Vanilla an Chocolate. If you crammed them all in your mouth at once, it probably tasted like a Mexican chocolate. Oh, we'd love to try that right now. 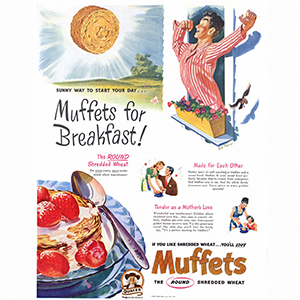 These giant, cylindrical shredded wheat cakes were once sold in America in the mid-century. Quaker's advertisment proclaimed they were "tender as a mother's love." Because "tender" sounds better than "soggy." However, we tend to prefer our cereals in tiny pieces. Muffets grew quite popular up in Canada, but have become harder to find. 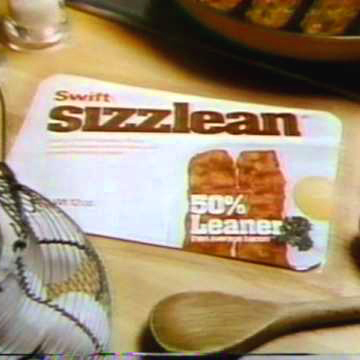 “Move over, bacon, there’s something leaner!” Or so the commercials proclaimed. However, this "healthy" alternate was still 37% fat. So, yes, it tasted good. Only that "Lean" part of the name was misleading. Not the "Sizz" part, however. 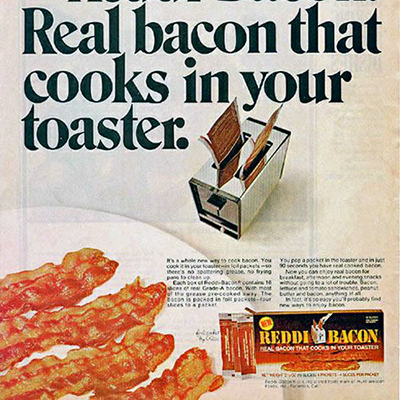 Food science! The brains behind Reddi-wip canned dessert topping tried their hand at breakfast in the 1970s. (Which is not to say you can't eat whipped cream for breakfast.) You popped the foil-wrapped bacon strips in your toaster for salty pork goodness. However, the packets leaked hot grease, which could burn your hand and ruin your toaster. So, yeah, stick with the pan or microwave. 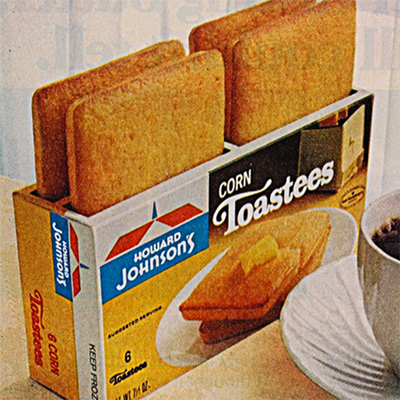 HoJo's was once the largest restaurant chain in America, serving up 28 flavors of ice cream under its steep sherbet-orange roofs. Of course, they had food for every meal, too. Few items were more popular than its Toastees, which came in both plain corn and blueberry varieties. HoJo's sold them in grocery stores, too. 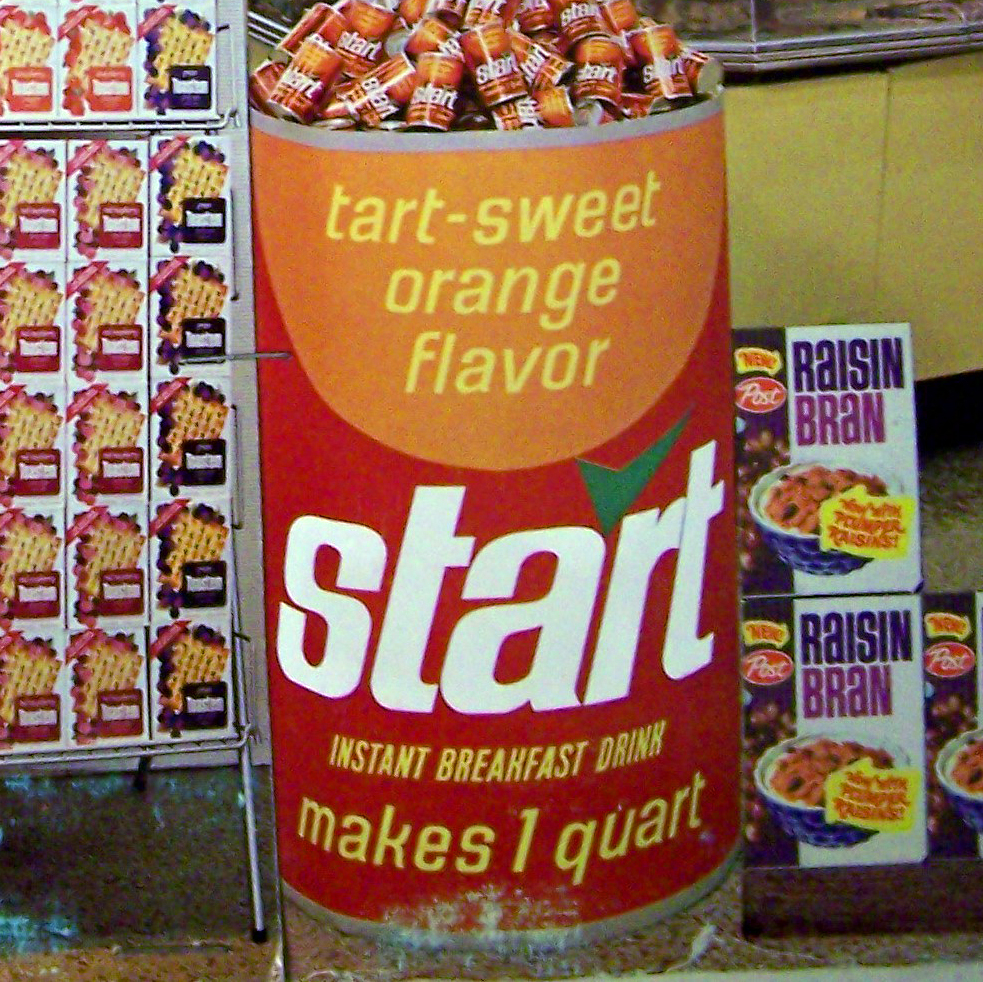 General Foods created this alternative to Tang, which purported to taste like "freshly squeezed oranges." Can anyone attest to that? 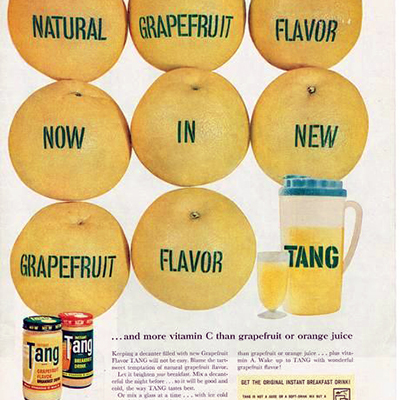 Yes, the almighty astronaut drink once came in a more sophisticated grapefruit variety, for those who wanted a tangier Tang. We're not sure if NASA ever stocked it, however. 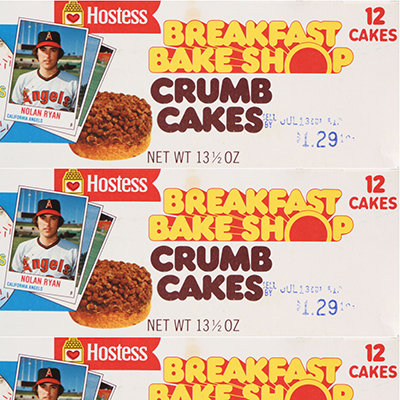 There is no shortage of various coffee cakes in vending machines around the country. However, we specifically miss dunking these Hostess cakes, especially if we could get a Nolan Ryan Angels card with a box. 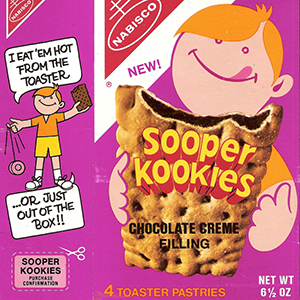 Sure, this chocolate-stuffed Nabisco toaster pastry may not seem like a healthy breakfast, but is it really any different than Cookie Crisp cereal or those new Jolly Rancher Pop Tarts? 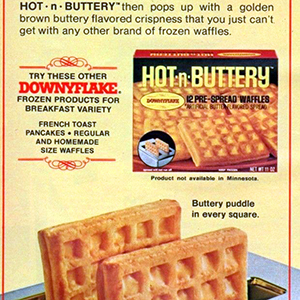 Downyflake's toaster waffled featured an "exclusive artificial butter-flavored spread" which melted to form a "buttery puddle in every square." A couple things about that "buttery puddle." One, when you put it like that, it sounds kind of gross. Two, wouldn't that all just drip into your toaster if it's vertical? 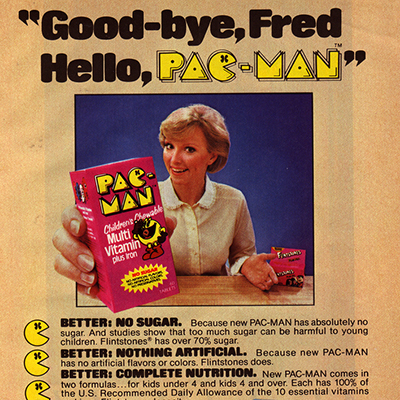 Breakfast is not complete for some without a multi-vitamin. Pac-Man gunned for the Flintstones in the 1980s with his rival "power pellets." 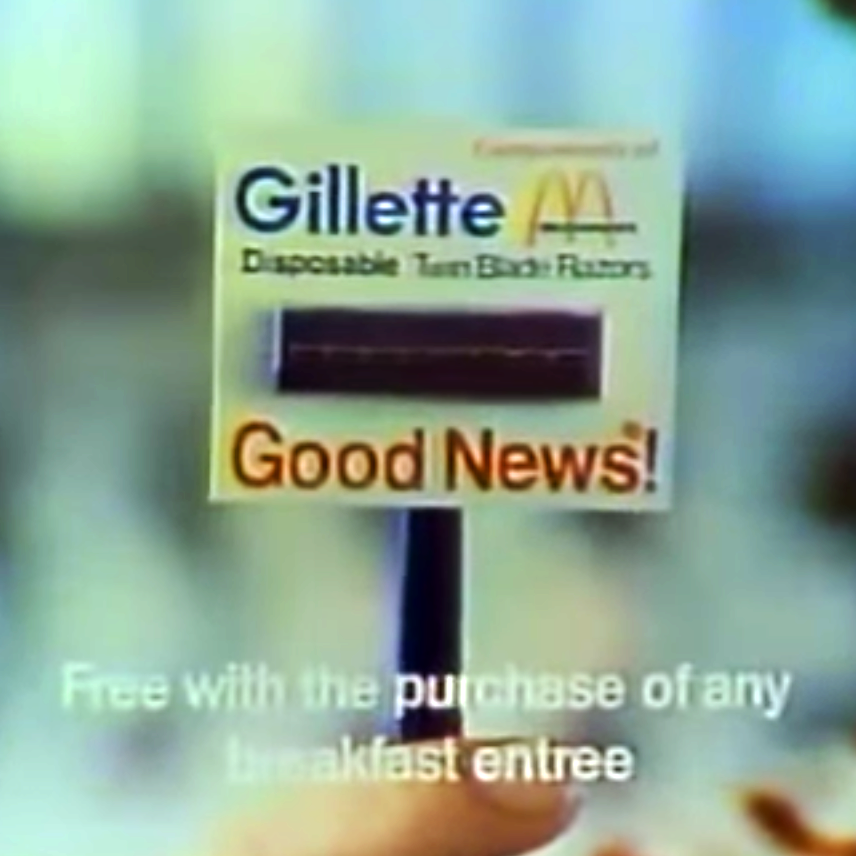 Finally, we end on something inedible but too bizarre to omit. Typically, fast food chains want to keep the word "razor" out of the mind of its customers. Yet, in 1978, McDonald's offered a free Gilette Good News disposable twin-blade razor, free with the purchase of any breakfast item. So you could presumably shave in the restroom before work? The fine print of the commercial did note, "Minors must be accompanied by an adult."

18 cereals from the 1980s you will never eat again 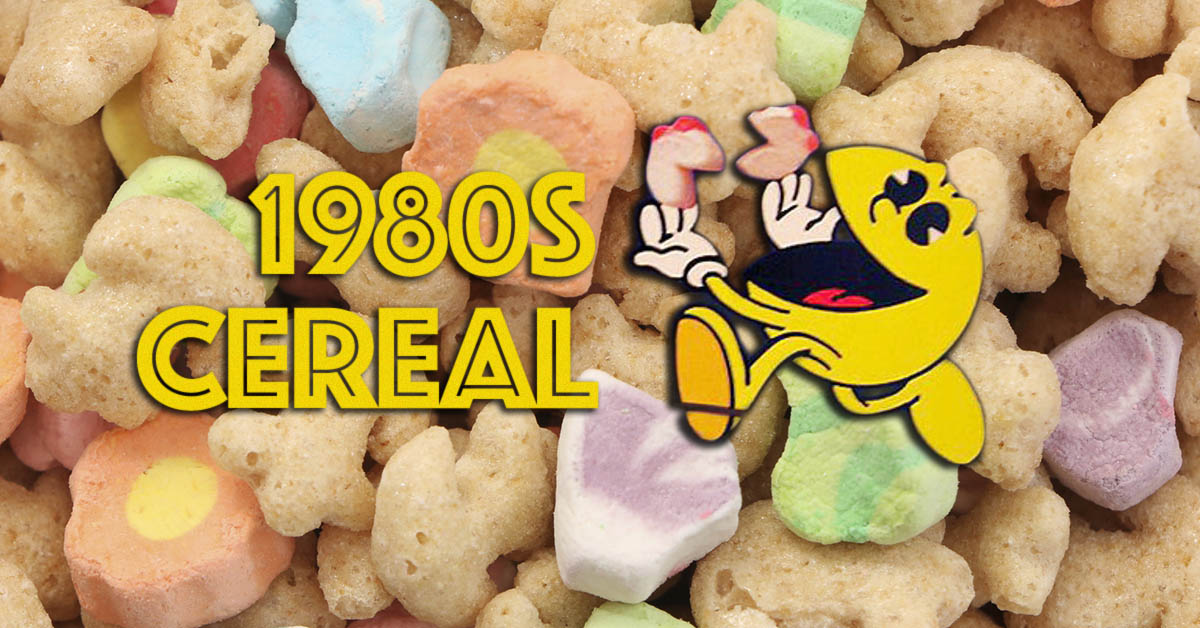 MikeSchmeltzer 10 months ago
I remember the Ho-Jo Toastees also had an orange flavor... they were my favorite !
Like Reply Delete

TexasGreek 20 months ago
Cherry Danish Rings were mouthwatering. Crunchy pastry (Cinnamon and sugar) on the outside and a flavorful filling on the inside.
Like Reply Delete

NoraYancey 25 months ago
I remember a breakfast food called Mix and Scramble and can’t find any reference to it anywhere. Does anyone else recall this?
Like Reply Delete

patd 28 months ago
My all time favorite not listed here was Bucwheats cereal put out by General Mills.

Amalthea 28 months ago
I LOVED Danish-Go-Rounds!
Like Reply Delete

Luis 42 months ago
There was a Grapefruit Tang? Gross!
Like Reply Delete