Who is pining for the days of adjusting the vertical hold? 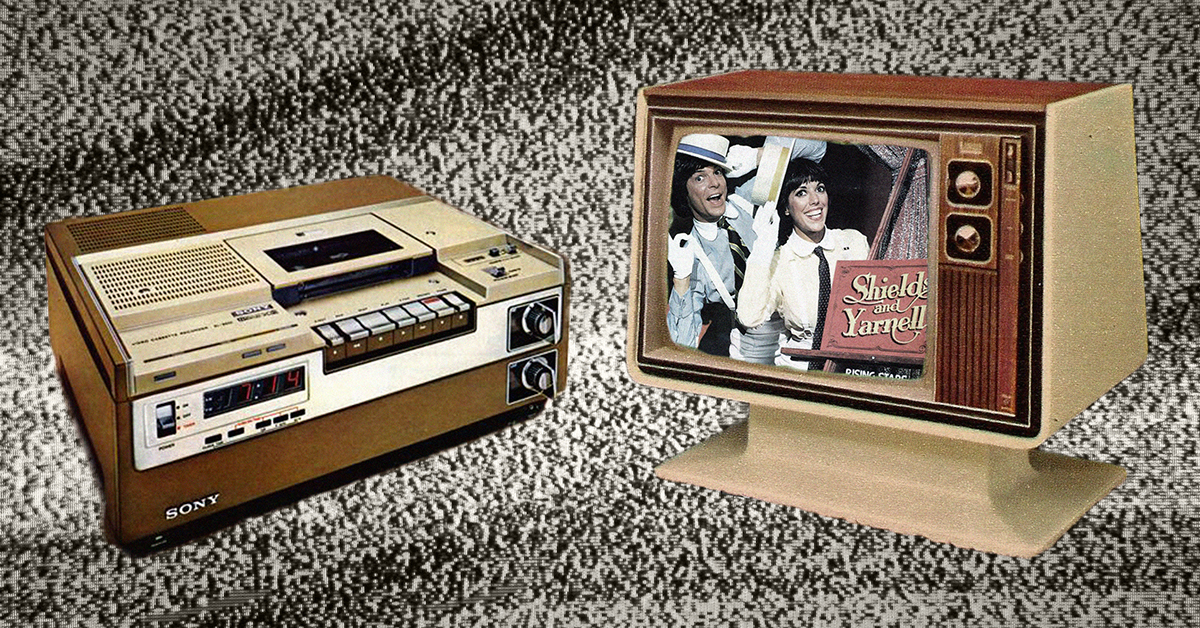 Obviously, we are nostalgic for watching television in the 1970s — and the entire decade in general. 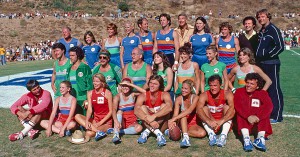 Groundbreaking new series like Mary Tyler Moore redefined the sitcom, Happy Days were here again, network stars were battling it out, Saturday mornings offered awesome kids shows, Ponch was chasing every trend of the era… You get the drift.

However, there are some things we are glad to not have to deal with anymore, primarily dealing with the actual television sets, and some concepts that rightfully died swift deaths.

Here are some things we're guessing nobody is missing about watching TV in the '70s.

1. Having to put one of these on your roof. 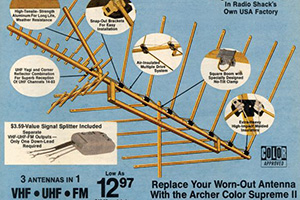 Who wanted to climb up on the roof in a rainstorm and fix the antenna? Some of these things had more branches than a dead maple tree.

2. Getting up off the couch to change the channel. 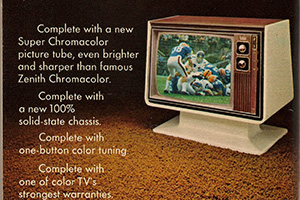 Kids today can't image living life without a smartphone. Can you imagine them dealing with no remote control? There was no channel surfing, unless you wanted to sit inches from the screen and keep turning the knob. 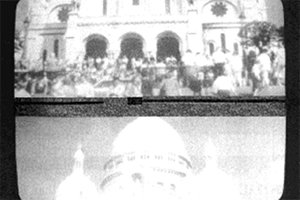 Speaking of knobs, fortunately we no longer have to fiddle with the V-hold and H-hold to get the image to fit properly on the screen.

4. Stations signing off for the night. 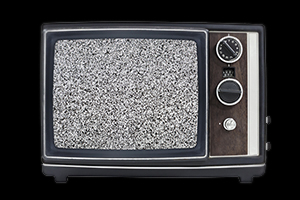 If you were a night owl or insomniac, you were reading a book. We do miss hearing the national anthem at sign-off, but it was a bummer when there was nothing to watch in the wee hours.

5. Mimes getting their own shows. 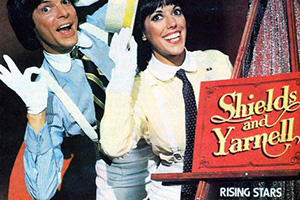 We have nothing against Sheilds and Yarnell. The celebrity mime duo made for great guests on variety and talk shows. (And Yarnell made for a great Wonder Woman villain, Formica.) That being said, the two probably did not need a showcase of their own. The Shields and Yarnell Show aired for mere weeks in 1977. 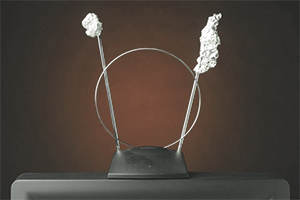 Who didn't "enhance" their antenna with some wads of Reynolds Wrap?

7. David Cassidy as an undercover cop. 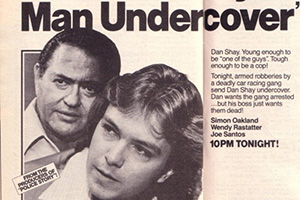 Millions of girls were crushing on Keith Partridge, and Cassidy made for one iconic, feather-haired teen idol. Which is probably why nobody bought him as a gritty undercover cop on the ridiculous David Cassidy: Man Undercover. Though the show was essentially the same concept as 21 Jump Street. 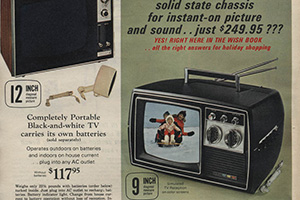 Portable televisions were all the rage, with their tiny 5" screens and plastic handles. It was the perfect way to keep up with Emergency! while camping… though you'd only get about 40 minutes of viewing before having to replace the eight massive D batteries juicing the thing.

9. Needing something this big to record your favorite shows. 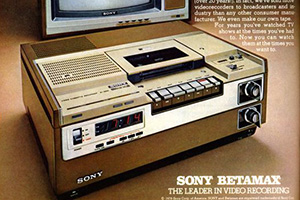 Video cassette records hit the market at the end of the decade. The tech sparked a revolution in how we watched television. However, you needed industrial shelving to house these behemoths.

10. When your VCR remote needed a cord. 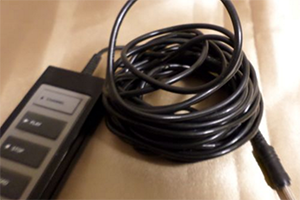 While we're on the subject of VCRs, remember when your RCA had to have its "remote" control plugged in with a ten-foot cord? It was easy to trip your little brother while fast-forwarding through that recording of B. J. and the Bear.

11. When your VCR chewed up your tapes. 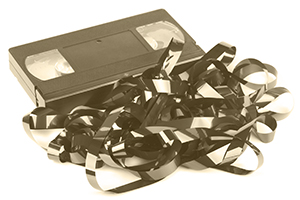 Oh, and how could we forget how the analog tape would get tangled up on the sprockets inside your VCR? You had better have kept a screwdriver handy, because undoubtedly at some point you were popping open that sucker to unravel five yards of mangled tape.

12. Cartoons that pandered to every single trend of the decade. 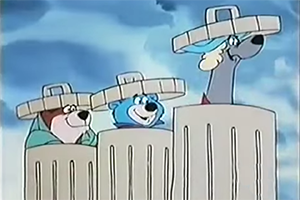 While we miss Saturday morning cartoons, they were not all gems. In fact, some of them were bizarre jumbles of every goofy 1970s trend. Take CB Bears, which centered around a trio of disco-named bears, Hustle, Bump and Boogie. They were a parody of Charlie's Angels, but also C.B. radio fanatics, but also mystery solvers who drove around in a transforming garbage truck. It's no wonder it only lasted 13 episodes.

13. Moving a television that weighed as much as a couch. 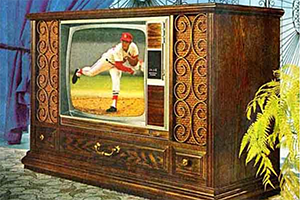 If your friend was moving, there was no way you were picking up that rotary telephone. Today, massive HDTVs are like paintings. Back in the day, a 30" television could weigh as much as an AMC Gremlin, as it was encased in an entire lumber yard. Who wanted to carry one of these suckers of a set of stairs? Also, it's nice to no longer need wood polish to clean your television set.

GenePopa 10 months ago
To be fair, "Man Undercover" was actually pretty good (and still holds up well for viewing today). Now, "Holmes and Yoyo" on the other hand....
Like Reply Delete 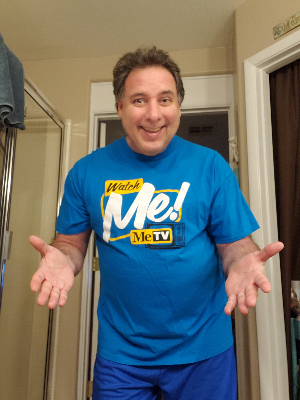 SirMichael65 10 months ago
Funny how today I have an over the air antenna so I can watch MeTV so number 1 applies today and not a big deal to install. As far as # 2 kids were the remote control in the family house. I liked being responsible as a kid of 6 years old changing the channel. I think the signing off at night would be welcome today because anything on that late isn't worth losing sleep over. I think we had a great variety of cartons in the 1970's and yes I watched the CB Bears. I enjoyed being a kid in the 1970's. Great time and life was so much simpler and real.
Like Reply Delete

RedSamRackham 24 months ago
* Every mediocre talent got a variety show! Take Pink Lady & Jeff PLEASE! * Forget the tin foil! Sticking a wire coat hanger into that broken TV antenna gave great reception! * When TV stations signed off at night we tuned into Top 40 or FM rock on our radios! Better than all-night info-mercials! ☺
Like Reply Delete

MikeBugal 33 months ago
The picture shows a Sony Betamax not a VCR. They were two different and competing formats. Those who preferred the Betamax swore to it's superior picture quality. VCR, of course, won the war and Betamax went the way of the dinosaur and the dodo.
Like Reply Delete Fletcher MikeBugal 31 months ago
Uh, no. You're thinking of VHS. Betamax and VHS were competing formats, but both were VCR, or Video Cassette Recorders. And for the record, Betamax was superior in every way, but Sony refused to license the technology, meaning every other manufacturer went with VHS. VHS therefore flooded the market and Sony's product was simply outnumbered both in retail electronic stores and movie rental shelves. Sony learned their lesson after this and when they invented compact disc technology they licensed it to everybody.
Like (2) Reply Delete

RobChapman Fletcher 10 months ago
That's not entirely accurate. It had nothing to do with licensing the technology.. I had two Betamax vcr's. One was a Sansui, the other a Hitachi. It had to do with content. Sony refused to license the format to pornographic companies. Since adult films were a huge market at that time, and were cheap compared to the price of a Hollywood film on videotape , American & European manufacturers went with VHS, since they believed they would sell more of them due to the adult market. They were right. And it led to the downfall of Betamax. You're also not correct about the CD. That was jointly developed by Sony & Philips, Sony never had exclusive rights to the format. They also never actually "learned their lesson", as both of their later proprietary formats, UMD (meant to replace the DVD & CD) and MiniDisc (meant to replace CD) were dismal failures. And finally, believe it or not, there WAS an actual format called "VCR", developed by Philips and released in Europe in 1972. It was planned to be introduced to the U.S. & Canada in 1977, but Philips decided to discontinue the format, instead of trying to compete with Betamax and VHS. Mostly due to the fact that Philips VCR was designed for the PAL system, and tapes were limited to a single recording time of 60 minutes. Modifying them for the NTSC format lessened that recording time to 50 minutes, compared to the 2 hour recording time of VHS (at regular speed)
Like Reply Delete

dcthornton 33 months ago
The WW episode was eponymously titled "Formicida", guest starring Lorene Yarnell as the villainess.
Like Reply Delete

Tammy 33 months ago
I kinda miss stations signing off,.. Our antenna was on the ground no climbing on the roof .Yes annoying in windy weather but still won't comp!ain it didn't cost a big chunk of money every month
Like Reply Delete

x60hz11 Tammy 24 months ago
Me too. Waking up on the couch to a test pattern meant it was time to crash.
Like (2) Reply Delete

RedSamRackham Tammy 24 months ago
* Those Eiffel Tower replica antennas on the roof (before cable/pay per view eras) brought in channels from other markets with blacked out sports at our local channels. ☺
Like (1) Reply Delete

RonaldFelder 50 months ago
don't knock tv antennas. use them and you'll still get plenty of channels and save lots of money and not be a slave to the cable company. shame on saying it's something you're glad to get rid of