You heard that right, Goober had a different name in one 'Andy' episode

Who the heck is Beasley? 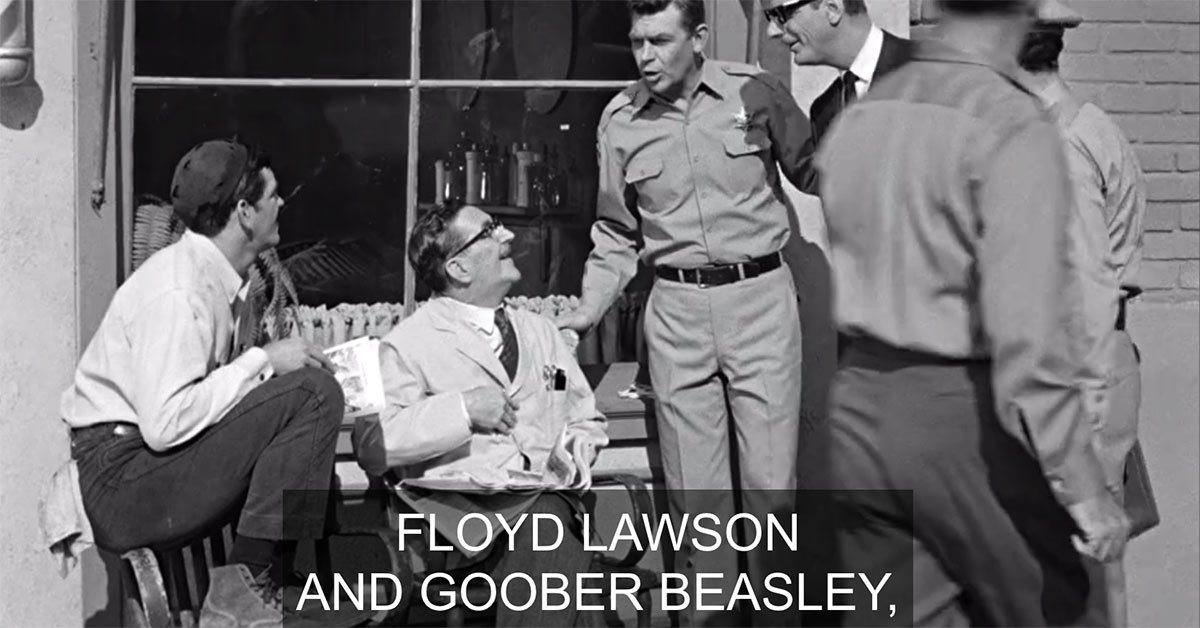 "TV or not TV" marked the 10th appearance of George Lindsey on The Andy Griffith Show. The sitcom had introduced his character, Goober, a year earlier. In his first scene in Mayberry, in the season-four episode "Fun Girls," Goober met Andy at the jailhouse. Gomer introduces the two, naturally.

"Hey, Andy! Say hey to my cousin Goober!" Gomer announces. The two cousins are about to go to "the picture show." Goober then performs his hilarious Cary Grant impression — "Judy! Judy! Judy! Judy! Judy!" — not to mention his Edward G. Robinson impersonation. Then he limps around the room like Chester from Gunsmoke. It is an unforgettable first impression. 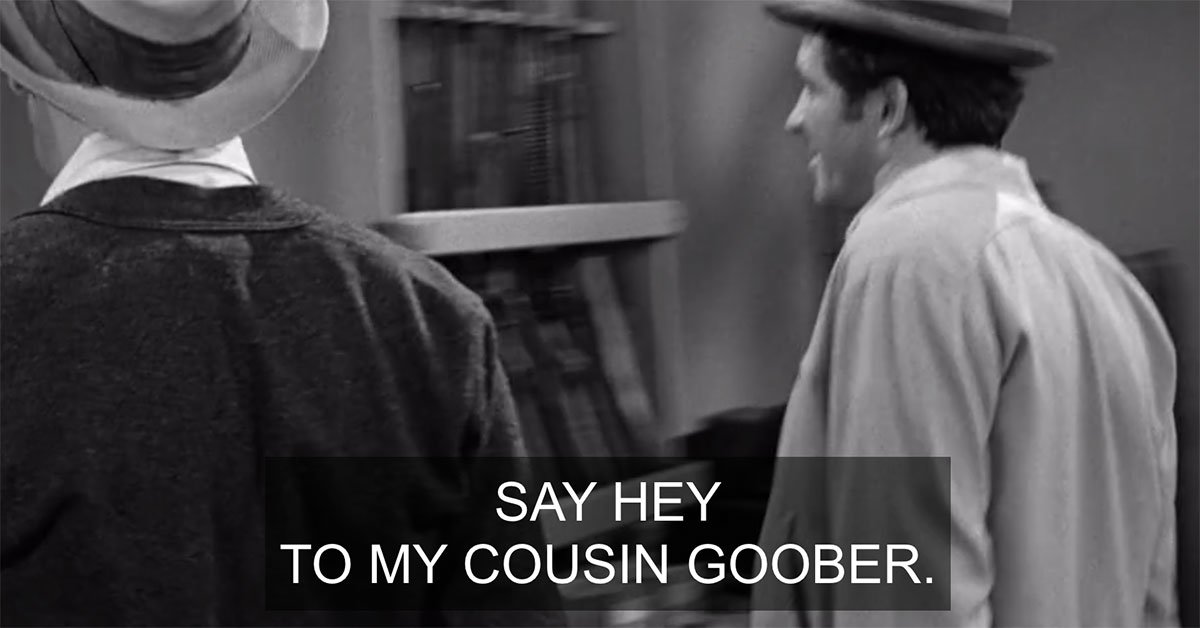 The first time we see cousin Goober in ''Fun Girls''

But they never mentioned his last name. We all just assumed it was Pyle, too.

Jump forward to season five. In "TV or Not TV," a magazine article about Andy, titled "Sheriff Without a Gun," lures curious "television producers" to Mayberry. Andy introduces these out-of-towners to the fellas sitting outside the barbershop.

"Mr. Harvey, I'd like you to meet Floyd Lawson and Goober Beasley, our barber and filling station attendant," Andy says. 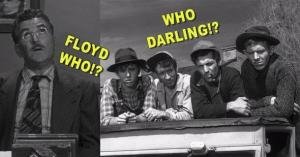 Why is it that Goober had the surname Beasley in this episode? It was only mentioned in this single episode. He would later become Goober Pyle.

The Mayberry Historical Society calls it an "error by the writers that was never caught." Or, it could be that they originally intended to call him Goober Beasley — not all cousins share a last name, after all — but later changed it to Pyle to avoid confusion. As you know, Gomer was off headlining his own sitcom by this point.

Whatever the reason for the anomaly, Goober was in good company. The last time "movie people" came calling to Mayberry in "Mayberry Goes Hollywood," Floyd was named Floyd Colby! What is it with these Hollywood folk confusing Hollywood writers?

Of course, these are two of many name discrepancies on the sitcom.

Muleskinner 7 months ago
It seems to me that Asa’s last name was Breeny in one episode and Bascom in another.
Like Reply Delete

JHP 8 months ago
I figured it out! Goober was the brother of the doll that Buffy had in family affair! WOO HOO!

Theres Clara Johnson and in one ep she's called Bertha

Rafe Hollister had a doppelganger on the show...maybe another "Fletch"
Like Reply Delete

Pacificsun 8 months ago
Here's an (enjoyable) difference between the MeTV Staff writers of now, and the original ones. A lot more research, use of a lot more resources, and drilling down to some very subtle trivia.

We used to rag on you folks (interns?) in the beginning. But now you seem to have some very interested staff who really watch the Shows and look carefully through the details!!

Thank you, there's always a good article for somebody!
Like Reply Delete 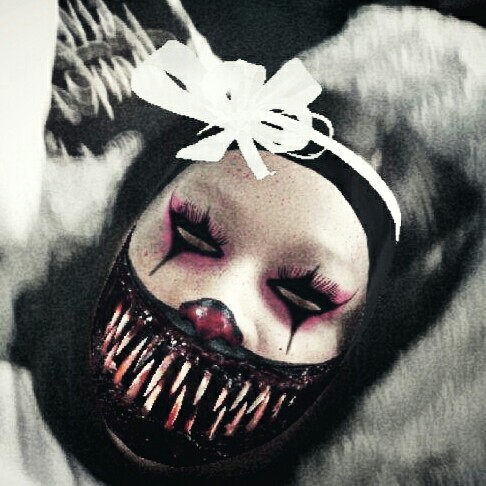 Shei 8 months ago
They also did the same thing with the character Clara Edwards. She was called Bertha in season 1 when Aunt B returned from taking care of her cousin Maude in Mt Pilot.
Like Reply Delete

Big3Fan 8 months ago
TAGS is my favorite TV series of all time, but continuity was definitely not it's strong suit.
Like (3) Reply Delete

Pacificsun Big3Fan 8 months ago
Many Show productions never counted on the run they actually turned out having. The average Shows didn't last more than 3 years. Except for the durable ones that fill up MeTV.
Like Reply Delete

Big3Fan Pacificsun 8 months ago
I remember reading somewhere that Andy only wanted to do five seasons but near the end of the run they decided to do three more. Don Knotts had already committed to doing movies for Universal. I've never felt that the color episodes were nearly as good as the black and white ones.
Like (2) Reply Delete

davidknol 8 months ago
I love these eccentricities.
Hogan’s Heroes with Palm trees in frigid Germany. Desilu Studios wasn’t to careful to frame shots away from these California trees. 🤪
Like (1) Reply Delete

MrsPhilHarris davidknol 8 months ago
I believe when Gomer was still in North Carolina palm trees were spotted.
Like (1) Reply Delete

Pacificsun davidknol 8 months ago
As seen, especially in window reflections!!

Look closely at the snow in Hogan Heroes. I believe someone said it was painted cereal because it was the most durable. Though you would think it would crunch easily! But I guess the paint helped preserve it!
Like (1) Reply Delete

ELEANOR davidknol 8 months ago
Let's try to figure out why they always had to have snow on the ground.
Like (1) Reply Delete

Nonflexus davidknol 8 months ago
And the sound of crickets in the winter scenes.
Like Reply Delete

cperrynaples 8 months ago
Well, why not solve the mystery about how movie Andy looks like Captain Stubing with a toupee worst than Shatner's...LOL!
Like (1) Reply Delete