Where To Watch Shop Store Contact
Home / Stories / Was Count Istvan Teleky on The Andy Griffith Show a real person?
Did you know?Mayberry

Was Count Istvan Teleky on The Andy Griffith Show a real person? 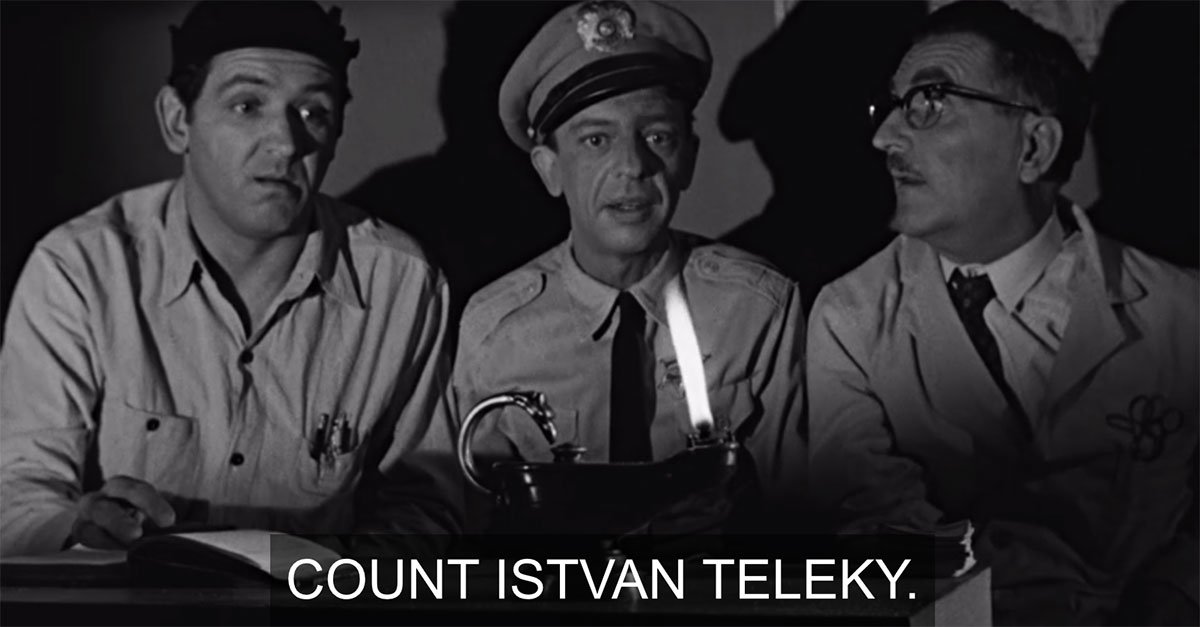 Goober flips off the lights at Barney's command in an unforgettable scene of The Andy Griffith Show episode "Three Wishes for Opie."

What we're watching is one of the very few flashback scenes ever depicted on this show. By a magic lamp's candlelight, we watch Deputy Barney Fife, with Goober on one side and Floyd the Barber on the other, try to summon a supernatural phenomenon he truly believes exists.

At one point, Goober throws powder on the candle flame, and Floyd, spooked, asks, "Who’s that?"

Floyd gets even more nervous.

"It sure is dark in here," the barber says. Goober agrees, but Barney has other ideas.

"Let's let him drift around a bit first," Barney suggests.

Well, we figured that October might be the perfect month to look into this Mayberry mystery from one of the spookiest episodes of the show!

And it turns out that, yes, there really was a "Count Istvan Teleky." 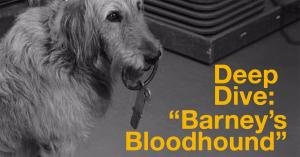 Did you know?Deep Dive
11 things you never noticed in the Andy Griffith Show episode ''Barney's Bloodhound''

Records on genealogy websites show that a Count Istvan Teleky was born in 1602 in Szék (now Sic) to a Count Mihaly Teleky and Anna Garázda. Ancestry.com shows an Istvan Teleky born in nearby Cluj-Napoca (formerly Kolozsvar) in 1735 to a Count Mihaly Teleky and Klara Bethleni. Actually, it was a common name for noblemen in the Teleky family in the region throughout the 17th and 18th centuries.

Now, these Count Istvans weren't very famous in history. You could say the one born in 1735 was really just a boy from a small town in Transylvania. But his dad, Mihaly Teleky was the Chancellor of Transylvania, and you know what a chancellor does? He's a top lawman. So in a way, Count Istvan was the Opie to Mihaly's Sheriff Andy!

In "Three Wishes for Opie," the count gives Opie three wishes, but he only grants Barney one wish in this scene.

"All right, I don't want to make it too tough," Barney says. "I'm gonna wish for a new finger-printing set we've been needing around here." He says he sent for one about six months ago, but nothing ever happened.

"Let's hope you get it!" Floyd says optimistically.

But then a door slams and Barney blows out the candle. Loud footsteps are heard clomping in the dark. Another door slams.

Barney's initially too scared to check it out, but he musters his courage and goes. That's when he sees the fingerprint set.

With shaking hands, he lifts the machine, the very thing he wished for, and returns to where Goober and Floyd are.

There's no way to know if the writers of The Andy Griffith Show actually named the count for sure after this Count Istvan Teleky, or if we as superfans are just reading way too far into it, but there is one thing that surely the show writers stumbled upon when naming this character.

The Teleky family hailed from the Romani region of Transylvania, which is known for two businesses: horse-trading and fortune-telling. It's where the gypsies came from who audiences read about or saw in other famous fictional works like The Hunchback of Notre Dame or The Tempest.

So it's likely that the name Teleky was selected while looking into the historical culture of fortune-telling and gypsies communicating with spirits to write this spooky episode because Teleky was a ruling family in the region.

Or maybe Count Istvan Teleky was just really fun to say? We'll never know for sure, but what we do know is, Barney's encounter with Count Istvan Teleky is sitcom magic – one of those great scenes from a memorable episode that makes the audience wish that they could find a magic lamp and visit Mayberry.

Mayberry
This telephone directory is from Andy Griffith’s real hometown

Mayberry
Hoke Howell put all of himself into Dud Wash
Are you sure you want to delete this comment?
Close

JHP 28 months ago
The one thing I have to say about this scene is that I wish I had a bunch of those lamps. I'd save so much on electricity because they throw off SO much light and also from different angles too! If you notice the shadows in the background..
Like (1) Reply Delete

ASperos 28 months ago
Love that episode!!!
Like (1) Reply Delete

hermanstein2015 28 months ago
One of my favorite episodes, trying to see Andy explain to Helen what happened lol.
Like Reply Delete
Load previous comments

hermanstein2015 JHP 28 months ago
We didn't notice any scenes missing but they do always cut out the very last funny scene before it ends, and I hate that.
Like (1) Reply Delete

hermanstein2015 Pilaf 28 months ago
Peggy was always my favorite girl for Andy but this episode I didn't mind Helen getting a little upset lol. I just loved watching Andy show her how immature she was being. I loved Helen in different episodes and didn't care in others.
Like Reply Delete

hermanstein2015 MrsPhilHarris 28 months ago
TVLand is doing a Mayberry Special all week with little snippets of interviews from the cast. You can watch the whole interviews on youtube though.
Like (1) Reply Delete

MrsPhilHarris Pilaf 28 months ago
I agree.
Like Reply Delete

StephenCarr 28 months ago
I always thought it was Count S. Von Deleky or some such nonsense. https://hubpages.com/entertainment/andygriffithtv
Like (1) Reply Delete

JHP StephenCarr 28 months ago
I have to agree with you - one thing about Don was his speech was always perfect. Most of the time he was yelling or yapping at everyone
Like (1) Reply Delete

MW1018 JHP 28 months ago
I can go one further than that....I thought it was Countess Vandelecky....I should have payed attention to pronouns!
Like Reply Delete