This early favorite had ties to Superman, Kojak and Italian opera. 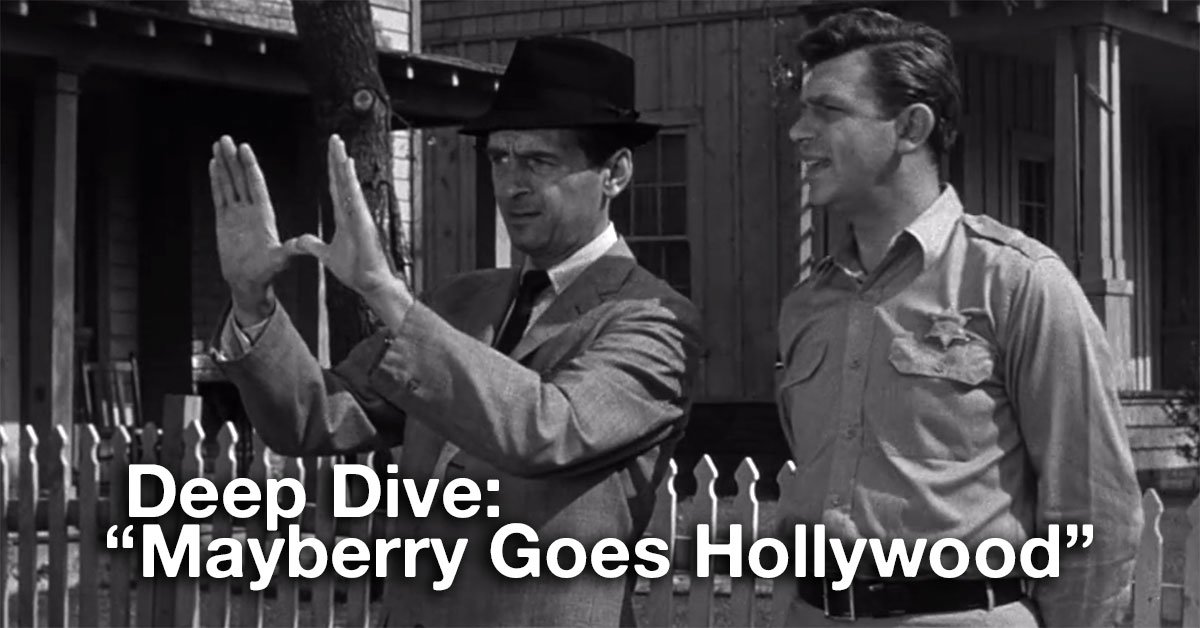 "Mayberry Goes Hollywood" is an important early episode for The Andy Griffith Show. It introduced a beloved cast member — though he was in a slightly unfamiliar form.

That is not all. The hilarious tale also had unlikely ties to Superman, Kojak and Italian opera. Bet you never noticed all of that.

As Sheriff and Deputy sweep out the jail cell, Barney tells an anecdote about Gordon Belfield, who visited Hollywood himself last summer. Gordon took a bus tour of celebrity homes. They stopped at Gary Cooper's house, where a tourist picked up Gary Cooper's newspaper off the lawn. The maid came out of the house and said, "Get off the grass!" Jump forward five years. The same exact scenerio happens to the Taylors! In the color episode "The Taylors Go to Hollywood," Andy, Opie and Bee find themselves on Cesar Romero's front lawn. Opie picks up his newspaper… and Romero's maid comes out of the house and asks them to get off the grass!

2. This curious headline also ran in The Daily Planet.

Speaking of newspapers, take a close look at the front page of the Mayberry Gazette. A headline in the center of the page declares: 110,000 Chinese Living in Trees as Result of Flood. Nearly a decade early, that exact headline appeared on the front page of The Daily Planet in the Adventures of Superman episode "Rescue"! In fact, the very same headline can be spotted as far back as 1935's Doubting Thomas, a Will Rogers comedy, as well as in the 1958 movie Bride and the Beast. The Yellow River sure did flood often in fictional Hollywood.

3. It was the first episode with Howard McNear. 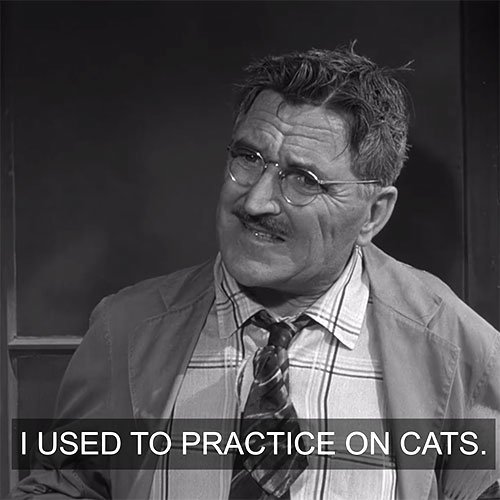 However, this was not the first appearance of Floyd the Barber! The character had appeared in the previous episode, "Stranger in Town," but was portrayed by Walter Baldwin. "Mayberry Goes Hollywood" marked McNear's debut as Floyd… but with one significant difference.

4. Floyd had a different last name. 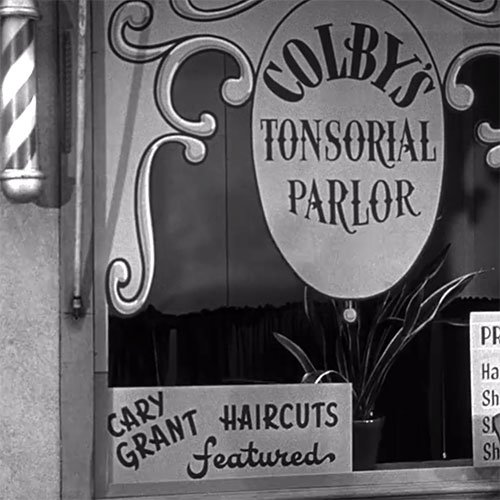 Floyd's last name was Colby for this one episode, not Lawson! When the town gussies itself up for the Hollywood producer, Floyd's Barbershop briefly becomes "Colby's Tonsorial Parlor."

5. The actress who played the mayor's daughter later dated Andy.

Josie Lloyd played Juanita Pike, daughter of Mayor Pike. She pops up again as "Josephine Pike" in "The Beauty Pageant." But this was not the only role in Mayberry for Lloyd, who in real life was the daughter of Norman Lloyd. In "Barney Mends a Broken Heart," she gets fixed up on a double date with Barney and Thelma Lou. Though her name was now Lydia Crosswaithe. Lydia turns up again in "Goober and the Art of Love," as a love interest for Goober Pyle.

6. The mayor has a portrait of Verdi in his office. 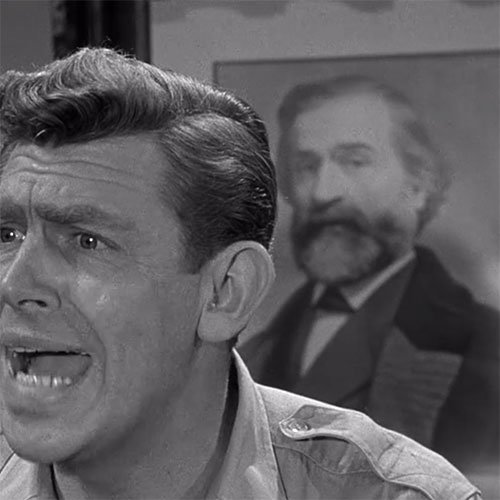 Speaking of Mayor Pike, the Mayberry municipal leader has a curious choice of art hanging in his office. You will spot a portrait of a stately gentleman with a bushy beard. Founding Father? Former President? No, it is 19th-century Italian opera composer Guiseppi Verdi.

Mr. Harmon is the Hollywood big shot who comes to Mayberry to scout the small town for a film. Dan Frazer plays the character. You might know him best as Capt. Frank McNeil, Kojak's superior on Kojak! He appeared in 117 episodes of the Seventies detective drama. 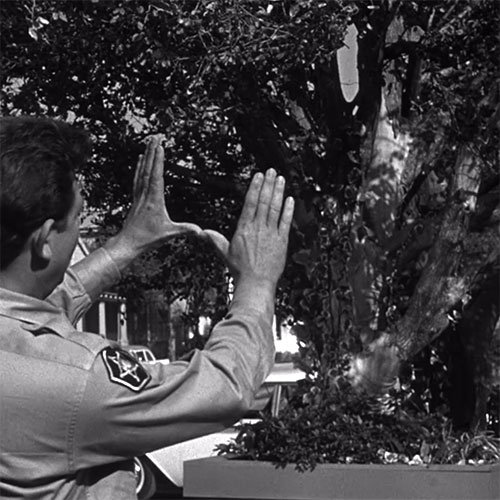 The town opts to cut down a large oak tree for the film production. Well, they must have done it — the oak tree in this particular position is disappears in later episodes. It was placed there as a prop for this episode. The water trough in "The Darlings Are Coming" is roughly in the same position.

In the background of "Mayberry Goes Hollywood," you can spot the Mayberry Theater. The place is more commonly seen as the Grand Theater in later episodes.

Andy ribs Aunt Bee for her love of Hollywood icon Rock Hudson. "Old Rock kinda does it for you, don't he?" Andy says. In real life, Frances Bavier worked alongside Rock Hudson (as well as Jimmy Stewart and Julie Adams) in the 1952 film Bend of the River.

robroyfingerhead 23 months ago
Hi. I'm new here.Why doesn't METV play the color Andy episodes ? I'm sure this has been asked before but I'm curious. Thanks
Like Reply Delete

RedSamRackham robroyfingerhead 23 months ago
* Color episodes are seen daily on UTOO channel but should indeed be seen on MeTV as B&W ones are being repeated too many times! ♣
Like Reply Delete

FredLeonard robroyfingerhead 23 months ago
Because the color episodes are not nearly as a good. At one time, local TV stations tried running the color episodes in black and white to fool people into watching them. They just really, really suck. Actually, they could skip the season one episodes, too, although those are still better than the color episodes.
Like Reply Delete

Chiperee RedSamRackham 13 months ago
I really cant think of any decent episodes in color , besides the Don Knotts returns episodes. Most are so cheesy/ sappy.
Like Reply Delete

KathyMcKinny 27 months ago
#1. hahaha, Barney didn't predict the future, the writers simply REUSED the SAME STORY. This was more of a WRITERS BEING LAZY scenario than a Barney is clairvoyant scenario.
Like (1) Reply Delete

Wiseguy 31 months ago
My mother, who didn't like or watch Kojak, was a regular viewer of As the World Turns during most of its run, 1956-2010. Dan Frazer had a run playing a recurring character, a police lieutenant, from 1984-96. So she knew the actor, not from his best-known role on Kojak, but from an afternoon soap opera.
Like (2) Reply Delete

JustGeri Wiseguy 31 months ago
Yes! I thought he looked familiar. His character on ATWT ...didn’t he marry the widowed Nancy Hughes?
Like (1) Reply Delete

cperrynaples JustGeri 30 months ago
Yes, and his character struggled with dementia!
Like (1) Reply Delete

FredLeonard Wiseguy 23 months ago
He also was a Canadian judge in an episode of Law & Order.
Like Reply Delete

JManSGV 31 months ago
"No, it is 19th-century Italian opera composer Guiseppi Verdi." 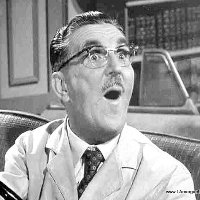 NipIt JManSGV 31 months ago
I before U in Giuseppe and E before N in chicken. I always forget that rule.
Like (1) Reply Delete

Rick 31 months ago
As far as I'm concerned, Josie Lloyd's awkward and earnest singing of "Flow Gently, Sweet Afton" to Harmon is the highlight of the episode. In fact, she steals the scene in every episode she's in, whether she's Juanita Pike or Lydia Crossthwaite. It's a shame she didn't care for Hollywood.
Like (5) Reply Delete

she's the pride of the neighborhood - she's the raw flame, the live wire

she prays like a roman with her eyes on fire:)

kimmer 31 months ago
I love these trivia tidbits!
Like (4) Reply Delete

UTZAAKE 31 months ago
7. Dan Frazer had a small role in the 1971 comedy film Bananas...but it was a memorable one!
Like (2) Reply Delete
texasluva UTZAAKE 31 months ago
I went to a Catholic Bingo Hall many years ago. They were lighting them up in a smoke filled room all the while Bingo callers bringing up a new ball out of the bingo machine. Not only gambling on Bingo but having Pull Tabs to extend ones gambling fix. Of course the excess monies goes to the Church which helps the whole religious organization. Never mind that you will die 20 years earlier with the excess smoking. You can just confess your sins right before you pass away. I wonder if the clergy also confess they had their constituents gamble in a smoked filled environment knowing their demise comes much earlier then normal. Funny how money and power work out in these situations. Its all for the Good, right?
Like (4) Reply Delete

texasluva 31 months ago
This comment has been removed.
Like Reply Delete
texasluva t 31 months ago
Here I thought my class lesson days were way behind me. I have you to thank for my unpardonable mistakes. Though such was my observance of actions of others. I did not state i was not puffing away on a Camel or Lucky Strike myself nor gambling at bingo, looking for B3. The said confessions were only per speculation (I wondered if), since I was not in the confessional box myself. All stated because of the New Testament Cigarettes commercial part in fun and wonderment. I guess it was back then, than comparing one with another. My bad
Like (2) Reply Delete
texasluva t 31 months ago
lighten up? Where's the Cap? Then "the the"? Calling All Cars! Be on the lookout for the punctuation and spelling guru. Goes by the name t. For teach? . Fun though

rgutierrez1968 31 months ago
Julie Adams also starred in one episode as County Nurse Mary who was trying to get everyone vaccinated.
Like (2) Reply Delete

ncadams27 31 months ago
Barney frequently talked about Juanita, a waitress at the diner all while dating Thelma Lou. But we never saw Juanita nor the diner.
Like (3) Reply Delete 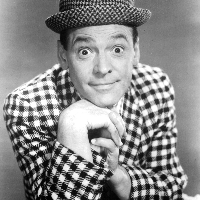 PINKYLEE ncadams27 31 months ago
We did see Barney sitting on a stool in a diner having breakfast - next to Earnest T. Bass.

That was the episode where Earnest T. kept escaping from his jail cell, but when Barney ran back to the courthouse Ernest T. was asleep in his cell.

But the name of the diner was never mentioned.
Like (1) Reply Delete

PINKYLEE 30 months ago
Wasn't the waitress with the sunny smile named Olive?
Like Reply Delete

JHP Pilaf 30 months ago
you mean the "attractive" woman with the clef chin and the schmaltzy music when she was in the scene?
Like Reply Delete

cperrynaples 31 months ago
A few comments: [1] 1 was clearly a callback the writers inserted in the color show! [2] Likewise, 2 was proably the result of both shows using the same FAKE front page! [3] Clearly, neither Andy nor Aunt Bee knew the truth about Rock Hudson...LOL!
Like (4) Reply Delete
Load previous comments

cperrynaples KirwoodDerby 30 months ago
BTW, there's a funny story about the name KirwoodDerby! The creator of Bullwinkle loved puns so that name was a play on Durwood Kurby, best remembered as Garry Moore's announcer! When Kurby threatened to sue, the creator said he'd be happy to pay for Kurby's lawyer! As a result, the lawsuit was withdrawn!
Like Reply Delete

RedSamRackham Pilaf 23 months ago
* Debbie who? ♣
Like Reply Delete