Where To Watch Shop Store Contact
Home / Stories / This Mayberry actress promised to not get married to further her sci-fi career
MayberryDid you know?

Apparently, she never wed. Her final two TV appearances were on The Andy Griffith Show. 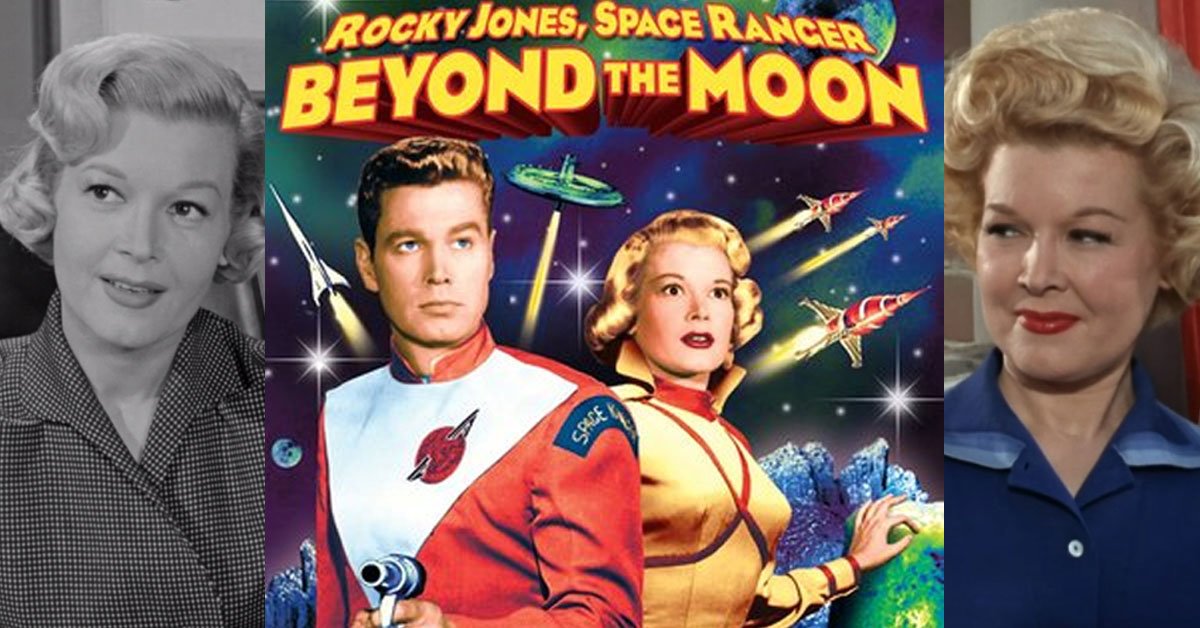 The second season of The Andy Griffith Show found someone rather unexpected in trouble with the law: Sheriff Andy.

In the episode "Andy on Trial," Andy messes with the wrong man, a big-time newspaper publisher named J. Howard Jackson, whom the sheriff caught speeding through Mayberry. At the time he's caught speeding, Andy lets Jackson go, but only on the condition that the publisher return to Mayberry in two weeks to stand trial and pay his fine.

When he doesn't show, Andy goes after him. When Andy won't back off, the publisher flips the script and lands Andy on the stand instead. 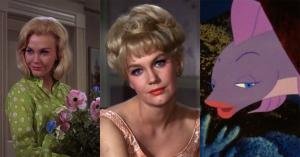 The episode starts with an exterior shot of a tall office building, signaling to viewers that we are not in Mayberry anymore. Next, we see Andy walking into an office, and there's a lovely secretary who greets him.

This secretary is played by Sally Mansfield, one of the great small screen beauties of the 1950s. She's best known for playing the leading lady in a since-forgotten science-fiction show called Rocky Jones, Space Ranger. It ran for 39 episodes in 1954.

Her character's name was Vena Ray, whose role on the ship was to do typical housewife chores like tutoring and sewing, but also intelligent and competent space adventure stuff like serving as navigator or translator. She was very much part of this crew, defending Earth from space invaders for a full season. Fun fact: The crew also included the ship's resident smartie named… Professor Mayberry!

To nab this role, Mansfield auditioned along with 300 other women. A knockout blonde with big eyes, she landed it with ease, but clearly producers liked her so much, they became very concerned with her ever choosing to leave the show. So in her contract, the story goes, she agreed to never marry and stay single throughout the show's run. She believed it was because they didn't want her getting pregnant.

Although Rocky Jones only lasted one season, Mansfield's contract was for five years. That seems like a lot to promise for a bit of stardom, but Mansfield was an ambitious actor who caught a lot of eyes.

In the same year that her sci-fi show premiered, she was selected to be Miss Emmy, a coveted onstage role where she got to carry the torch and pose as the statuette during the TV awards ceremony. Miss America had the honor the prior year.

But Mansfield wasn't the only one making weird promises in her TV contract. Her costar Richard Crane, Rocky Jones himself, also had to make agreements regarding his marriage status. In his contract, he agreed not to divorce his wife during the show's run.

Although Crane did eventually remarry after the sci-fi show ended, it appears that Mansfield kept her end of the bargain, never marrying her entire life.

She continued acting, guest-starring on The Phil Silvers Show, Hazel, The Donna Reed Show and Bachelor Father. But her acting career ended in 1965, with the last of two appearances she made on The Andy Griffith Show. 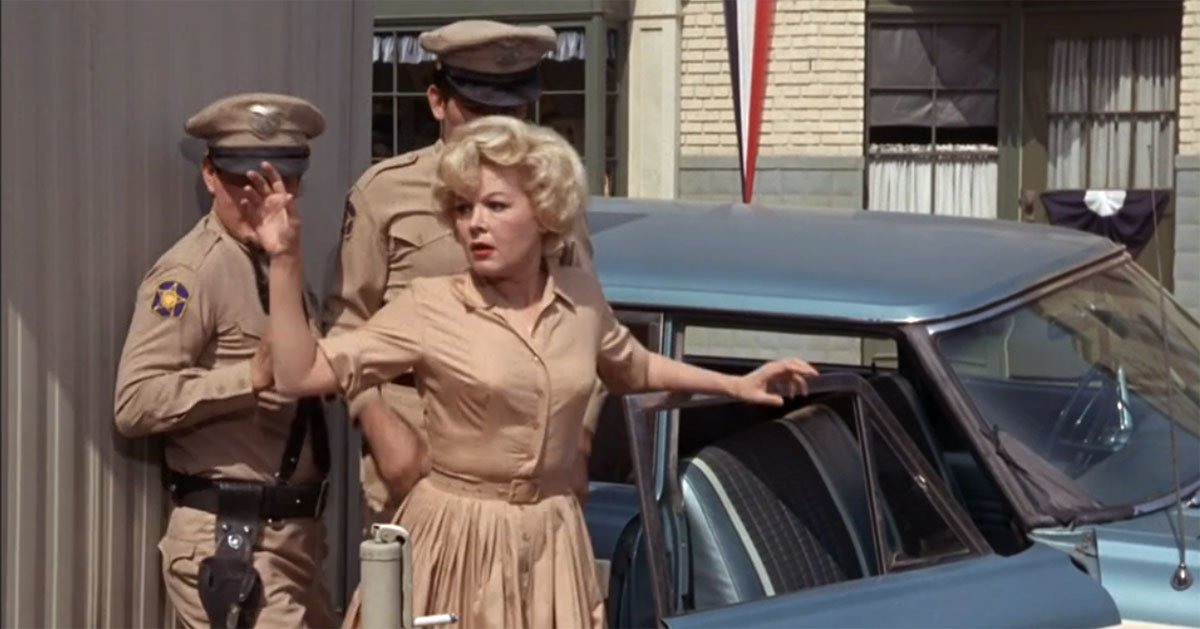 Mansfield in ''The Cannon''

The second and final time we see Mansfield in Mayberry comes in the sitcom's sixth season. She plays a character named Stella in an episode called "The Cannon." This time, she's not just the secretary of the rulebreaker Andy's after — she plays one of the thieves who gets caught in the end!

A lovely actor who could play good guys and bad guys equally well, Mansfield stopped acting after this last appearance on The Andy Griffith Show. She passed away in 2001, but not much is known about her life after she stepped out of the spotlight.

In an interview about her starring role for Rocky Jones, Mansfield described producers' expectations of her, and it turned out to be a true summation of her career and her life: "I'm just a sweet little thing who lives in a sort of vacuum — on the television screens and in private life, too."

Did you know?Mayberry
Ken Berry's wife showed up in Mayberry long before he did 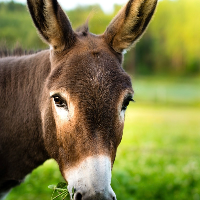 Muleskinner 25 months ago
In 1956 Sally appeared in The Phil Silvers Show episode, The Con Men. She was really good in that comedy and it is very funny. Check it out on YouTube if you would like to see Sally in it.
Like Reply Delete

Muleskinner 25 months ago
According to IMDB, Sally married at least twice and was widowed both times. In 1952, she volunteered to entertain GIs in Korea during Christmas. She had to travel by dog sled to some outposts. Sally wore a specially designed sweater with insulted padding to protect her from -30 degree temperatures, but had nothing to cover her legs except her stockings. Sally died of lung cancer in 2001 at the age of 70. She was really gorgeous.
Like Reply Delete

Lacey 25 months ago
"since-forgotten science-fiction"
Not since Mystery Science Theater spotlighted the show in two of their episodes.

An interesting article otherwise, I am sorry there is no real information on Sally for the almost thirty-five years of her life after acting.
Like Reply Delete

DJS3 26 months ago
In today's ulta "PC" environment, if someone even suggested putting a clause like that in an actress' or actor's contract, not only would they loose their job, but the production company/TV channel/film company would be boycotted until bankrupt and all employees (and all their families and friends) apologized for everything they may have ever done (even unknowingly) wrong from the day they were born until now.
Like (3) Reply Delete

MaryMitch DJS3 26 months ago
They SHOULD lose their job over that.
Like Reply Delete

DJS3 DJS3 25 months ago
That was my phone's autocorrect, incorrectingly, correcting me. 🤷‍♂️
Like Reply Delete

DJS3 MaryMitch 25 months ago
That's the point I was making.
Like Reply Delete

bsantaniello 26 months ago
According to Wikipedia she was married to Don Fallon.
Like (3) Reply Delete

texasluva 26 months ago
Houston (MeTV) we have a problem....Story states she was never married but I have found references of a spouse and possible 2 others. This is on Find a Grave:
Actress. Born Marie Mahder, she graduated from Gage Park High School on Chicago, Illinois' south side, where she was active in theater. Coming to California, she entertained troops at USO shows in Korea. Her most famous role was as "Vena Ray" on the syndicated science-fiction television series "Rocky Jones, Space Ranger". Other appearances included roles in "Death Valley Days" and "Bachelor Father". After marrying Don Fallon in the 1960s, she retired from acting.

MrsPhilHarris texasluva 26 months ago
All those question marks. Maybe she never actually married any of them.
Like (2) Reply Delete

texasluva MrsPhilHarris 26 months ago
It all depends on what references you find them from. One has different DOB, one mentions she left the screen because of marriage. Also others that hint at other marriages with no known date. We know she left for a reason and most of them are.
A. Sudden passing for various reasons.
B. Marriage and in one case and I forgot whom but was that she became a Nun.
C. Child actors that are done by the time they hit adulthood.
D. Usefulness
The one main reference was that she got married and there was not much information afterwards until death. Which was like 35+ years later. Also that MeTV said she never married. I like to check actors out to see why or when they left acting. This was a strange one to be sure. I found the burial site and references there also. Take your pic LOL.
Like Reply Delete

MrsPhilHarris texasluva 26 months ago
It was Delores Hart that became a nun.
Like (2) Reply Delete

texasluva MrsPhilHarris 26 months ago
Oh that's right. She was supposed to marry a guy and then had visions and turned to the Heavens. They both never married. He has since passed on.
Like Reply Delete

MrsPhilHarris texasluva 25 months ago
That is correct!
Like Reply Delete