Where To Watch Shop Store Contact
Home / Stories / This Addams Family veterinarian married Shirley Jones in the real world
Did you know?

Marty Ingels became a top talent agent known as everybody's "celebrity connection," but he had to beg to get Shirley Jones on the phone.

"Are you calling in reference to a bird, dog or cat?" Dr. Gunderson, a fast-talking veterinarian, answers Morticia’s call when The Addams Family pet lion needs medical attention.

"Cat," Morticia answers, without further specifying what kind of cat.

Appearing in the 1966 episode "Cat Addams," the unsuspecting vet lured to the Addams lair is played by Marty Ingels, an actor who at the end of the 1970s had a public nervous breakdown after his first wife left him and offers for roles soon started drying up.

For Ingels, this low point might have marked the end of his career, if he wasn’t just as fast-talking and focused as the vet he played on The Addams Family.

When Ingels couldn’t make ends meet with his acting, he got creative, launching a new kind of talent agency where he became known as the "celebrity connection" — a man with a singular talent, who could get any celebrity to do pretty much any commercial or promotion.

"If you put a telephone number in front of me, I’ll do everything I can to reach a person," Ingels told The Wisconsin State Journal in 1977.

That year, Ingels didn’t just rebound with profound professional success, but he also found his true love when he married Shirley Jones, the cheery mom from The Partridge Family. 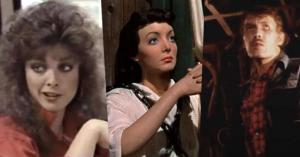 They are a classic example of opposites attracting, and the only reason they got together was because Ingels was so determined to get her phone number after seeing her at an art event and noting a hidden sadness in her eyes.

"I don’t want to make it sound like a Hallmark card, but I looked in her eyes and they were filled with sadness," Ingels told The State in a joint interview with Jones in 1979. "To me it was a curious kind of telegram because I was a sad sack, too."

At the art event, Jones was sad.

She was getting past her own first failed marriage to actor Jack Cassidy, and people in her circle who were aware of Ingels’ nervous breakdown did everything in their power to keep her number out of Marty’s hands.

When Ingels finally dug up Jones’ number, he didn’t just ring her up right away.

He spent days writing a four-page speech, spending hours at libraries studying everything she said in magazines and staring at her pretty face.

"I went to libraries and clipped pictures of her out of magazines," Ingels said. "Then I went home and pasted them up, making a giant collage. I began making lists of things I wanted to say to her. I wasn’t going to risk everything by giving her the usual small talk or spilling out some crazy stuff. I’d organize everything into a perfect speech."

After all that effort, though, Shirley wasn’t home when Ingels finally got hold of her number and called. He left a message and waited by the phone for days until he figured she just wasn’t interested.

Then one night as he was crawling in the bath, the phone rang and it was her!

The first thing Ingels did was set down the receiver and run to grab his notes, which Jones said read something like this:

"There’s something in your eyes that I sense a kinship to. I feel you’re sad and I just want us to go somewhere together. Let’s go to the prom. Let me get you a corsage and take you out for popcorn. Let’s begin our lives all over again."

Jones found this endearing, even as she noted the tension in his voice as he read his heart out to her.

"He said it engagingly, charmingly, like a little boy wanting to be cuddled," Jones said. "I’d just been through the trauma of breaking up with my husband and I needed some laughter in my life."

Thus began the dynamic that sustained their relationship for nearly 40 years, until his death in 2015, her giving him the love he needed, and him giving her the laughs she craved.

After Ingels finished reading his speech, Jones agreed to go out to dinner, and characteristically focused, Ingels scouted the perfect restaurant for their first date.

"I found just the right place," he said. "We had our date and I spent one and a half hours mustering the courage to lean over the table and give her a kiss. I didn’t want it to be a kiss reminiscent of other kisses."

Jones confirmed the kiss was special and stood out, and in 1977, the pair wed in a private ceremony at the Bel Air Hotel, where Jones’ son Shaun Cassidy gave his mom away to Marty.

Watching Ingels as an actor in any role before 1977 is a reminder of how difficult his life was before Shirley came along, and through the decades they spent together — including a lawsuit they won against The National Enquirer for printing false rumors about their relationship — Ingels proved just as devoted as he felt the moment he fell in love with her at first sight.

"I don’t know how God made her — maybe out of old Cadillac parts found in the basement — but she’s an absolutely incredible woman, better than I deserve," Ingels said. 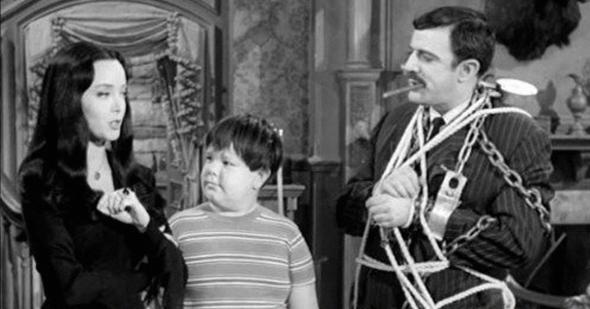 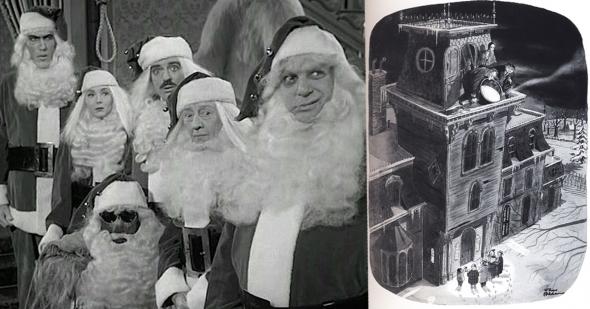 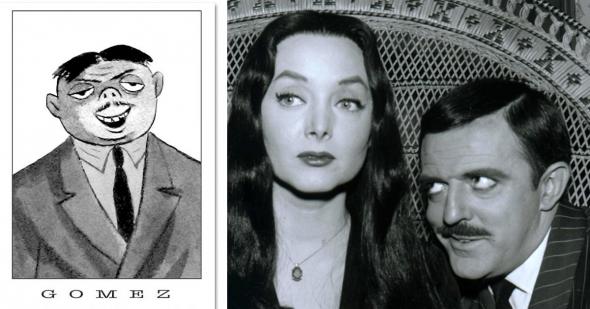 Did you know?
John Astin fought the good fight to keep Gomez from being bald
Are you sure you want to delete this comment?
Close

denny 10 months ago
Anyone read her book? It's really a good read. She gets really explicit in her story telling.
Like Reply Delete

BalboSaggins 11 months ago
She euthanized dogs because they couldn't find owners.
Like Reply Delete

MikefromJersey 11 months ago
"Shirley Jones, the cheery mom from The Partridge Family."
Um, MeTV guys, she had a BIG career in motion pictures, was in some all time
great films and won an Oscar.
The Partridge Family was entertaining junk, I watched it, but it was fluff for kids
and in no way should she be remembered just for being in it.
She could sing, dance, do drama, plus I for one have never run across one
negative comment about Shirley anywhere.
Like (2) Reply Delete

RedSamRackham MikefromJersey 8 months ago
* Albert Brooks said that Detroit could recall all station wagons by holding a David Cassidy concert! * TV producers wanted the Cowsill kids for the sitcom but they turned it down when Told that Shirley Jones would replace their real mom * ♣
Like Reply Delete

Pacificsun 11 months ago
It's not even worth it.
Like Reply Delete

JDnHuntsvilleAL Pacificsun 11 months ago
What are you babbling about? "WHAT" is not even worth what?
Like Reply Delete

Or drag a file here to upload
Steve2021 11 months ago
I remember Marty in a early army Dick Van Dyke sitcom he played Sol Pomeroy.
Like (2) Reply Delete

AnnieM 11 months ago
I mainly remember Marty Ingels from his appearances as a judge on 'The Gong Show' - now THAT is a show I wish MeTV could pick up, as it's really more than just a game show. I couldn't wait to see it every day after school; it was so completely nuts, I loved it. 😂
Like (1) Reply Delete

AnnieM stephaniestavr5 11 months ago
I should look there again. The last time I looked had to be years ago, but the video quality was so bad they were nearly unwatchable.
Like Reply Delete

Pacificsun AnnieM 11 months ago
It was ABC's cheap entry to fill a timeslot, and to get some recognition. Imagine AGT with no production value whatsoever. A show like that runs with no cost except for guest talent. But if it becomes an audience hit, hits gold for sponsors. I remember TV Guide critics said it was so bad, that it was novel for that quality alone!!!
Like Reply Delete

Runeshaper 11 months ago
Sounds like they had a very special relationship (-:
Like (1) Reply Delete
Load previous comments 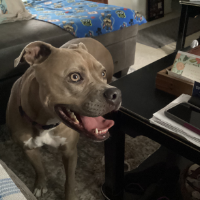 AllisonWunderland stephaniestavr5 11 months ago
My pleasure 😊 Have a great rest of the day!
Like (1) Reply Delete

SuzeQ stephaniestavr5 11 months ago
This recitation is actually quite sad. A number of the things you mentioned are not "wrong". It's ok to smoke and drink and date, surely. None of your choices make you better than anyone else and, in some people's eyes, they may make you worse. Finally, if Shirley Jones likes an active social life, that's really none of your business. It's not wrong, and nobody should judge her for it. You seem like a very sad individual.
Like (3) Reply Delete

Pacificsun Marky797 11 months ago
Thank you!
Like (1) Reply Delete

daDoctah 11 months ago
Ingels' connection with the Addams Family goes back a couple of years earlier when he and John Astin starred in "I'm Dickens, He's Fenster". Wikipedia reminds us that it ran opposite "Sing Along With Mitch" and "Route 66", so it's not surprising it failed to draw viewers.

He also appeared on "The Dick Van Dyke Show" as Rob's army buddy Sol Pomeroy. (He was replaced in later seasons by Allan Melvin as variously Sam Pomeroy, Sol Pomerantz and Sam Pomerantz, the last variation of which was also played by Henry Calvin in one episode.)
Like (8) Reply Delete
Load previous comments

Cougar Pacificsun 11 months ago
I have it( ID/HF) on DVD, it was a good show!
Like Reply Delete

unklden daDoctah 10 months ago
Finally, someone remembers I’m Dickens, He’s Fenster. And what a great show that was! Almost like a modern “Laurel and Hardy”. Ingels and Astin had great chemistry and the writing on the show was superb! Too bad it only lasted one season…About ten years back, the first half of the season was released on DVD, and there was never a follow up, too bad, not enough interest…
Like (1) Reply Delete