The Waltons house was also a rather important home in Mayberry

Decades later, the Waltons house became the center of Gilmore Girls, too. 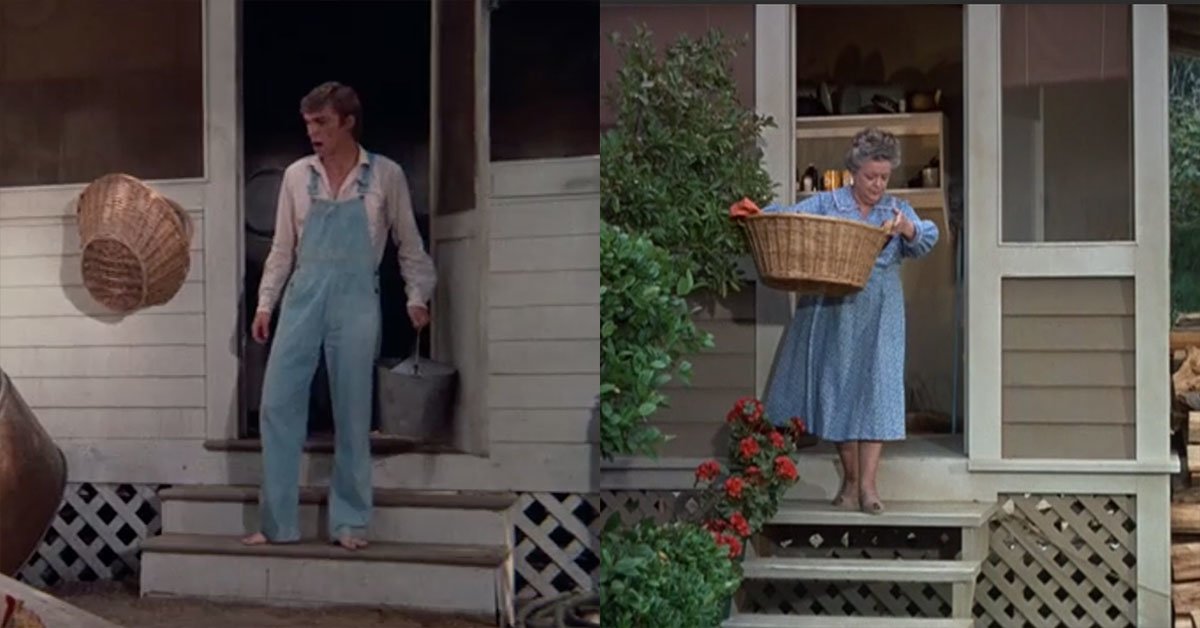 "It's a jungle out there." That's what they say about the big city. (It also happens to be the theme song to Monk.) Perhaps that's why people retreat to the rural calm seen on shows like The Waltons and Mayberry R.F.D.

But here's a little Hollywood secret: Both The Waltons and Mayberry R.F.D. filmed in "the jungle."

Warner Bros. Studios built a tropical set dubbed "The Jungle" on its backlot for the 1956 film Santiago. That Alan Ladd movie took place in Cuba. But the lush outdoor set quickly evolved to stand in for other green places around the globe. On the north end of the Jungle set, Warner Bros. constructed a farmhouse that came to be named Doonevan Flats. The two-story home featured three widows across the upper level, above a wide porch that spanned the entire facade. A traditional red barn stood to the right of the house.

The Doonevan Flats farmhouse was first heavily used on television in Mayberry R.F.D., the spin-off of the beloved Andy Griffith Show that kicked off in the fall of 1968. The farmhouse was the center of the show, the home of Sam Jones (Ken Berry) and his son Mike (Buddy Foster, elder brother of Jodie). In the opening credits, Sam and Mike play catch on the front lawn. 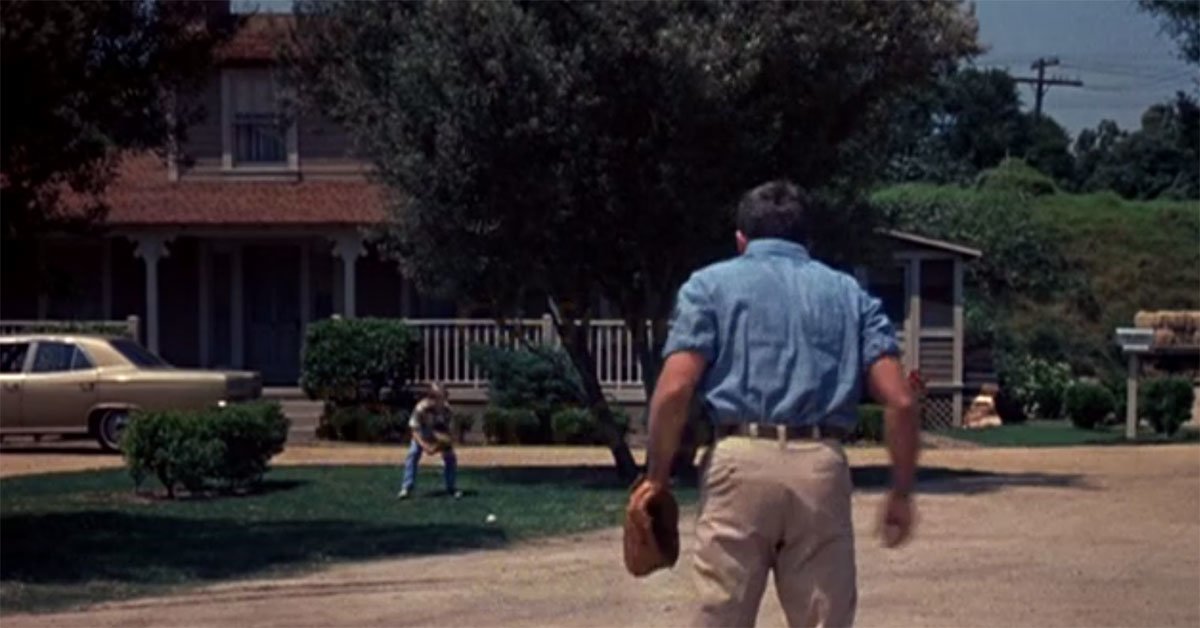 In the premiere episode, "Andy and Helen Get Married," Aunt Bee spends a lot of time in the Jones farmhouse, too. You can see her exiting from the side door in the image at the top of this post.

Next to that shot, you can see John-Boy coming out of the same doorway. Because this house transformed into the Waltons homestead in little time.

According to the book Warner Bros.: Hollywood's Ultimate Backlot by Steven Bingen, Waltons creator Earl Hamner Jr. noticed the Doonevan Flats farmhouse on the Warner Bros. Studio lot and was struck by its resemblance to his childhood home in Schuler, Virginia. A coat of white paint was slapped on the exterior and dormers were added above the windows to complete the transformation. 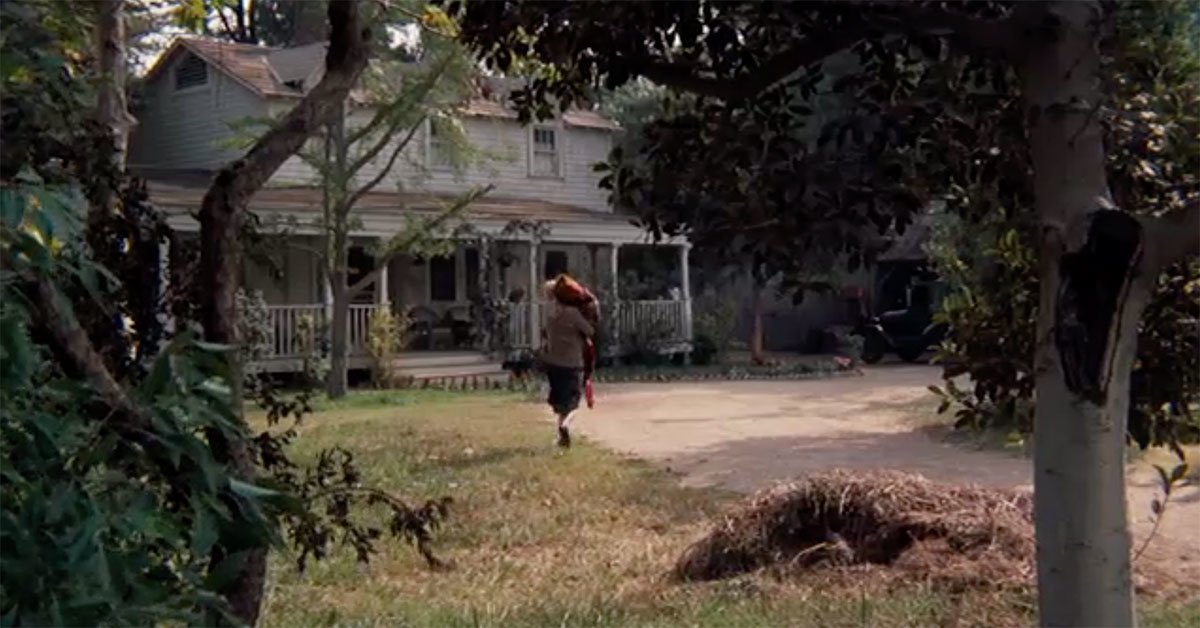 The set served as the Waltons home through the show's nine seasons. The family did not disappear from television, however. The Waltons clan continued to return for reunion movies. And that is where problems arose.

In November 1991, a fire on the Warner Bros. lot (reportedly started by a disgruntled employee) destroyed the Waltons home. The Waltons still made three more made-for-TV movies in the 1990s, celebrating Thanksgiving, Easter and the marriage of John-Boy. So what did they do for a home?

Warner Bros. rebuilt the place, of course. Away from the Jungle. The Waltons Farmhouse 2.0 was constructed on a different studio lot, the Warner Bros. Ranch in Burbank.

The final Waltons tale, A Walton Easter in 1997, would not be the end of the home. At the dawn of the new millennium, the old house gained new life on Gilmore Girls. This time, the home was not in fictional North Carolina or Virginia. It became a key structure in Stars Hollow, Connecticut. Lorelai Gilmore (Lauren Graham) purchases the run-down place and converts it into the Dragonfly Inn. You can even see the old red barn when the inn finally opens at the end of season four. 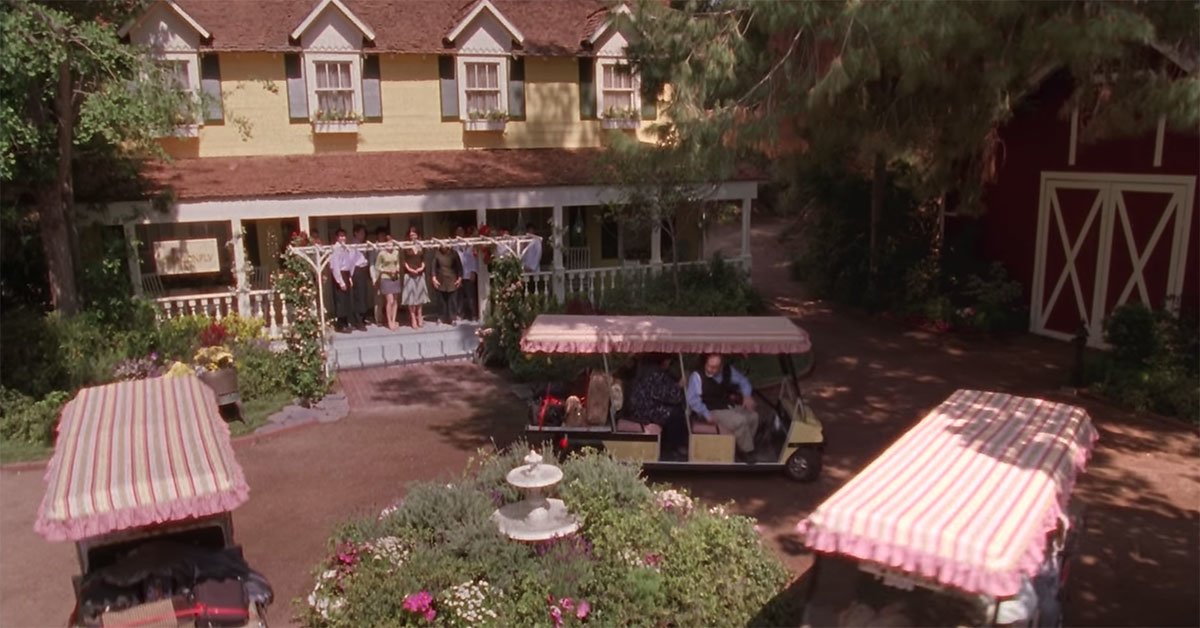 From the Jungle to Appalachia to New England — now that is Hollywood magic.

William67 3 months ago
I knew the waltons house was used on Gilmore Girls but I didn't know it was used on Mayberry R.F.D. Amazing what we find out when we look into things.
Like Reply Delete

StevePratt 24 months ago
A minor correction - Earl Hamner was from Schuyler, VA, (not Schuler), just down the road a piece from the oft-mentioned Rockfish and about 30 miles (as the crow flies) from Charlottesville. Loved the show.

Betty 24 months ago
I watch Andy and now the Waltons on MeTV. Now all they need is the Gilmore girls and I would be happy!!
Like Reply Delete

Utzaake 24 months ago
The Waltons Farmhouse later became the Dragonfly Inn? To paraphrase Abe Gibron, I didn't know that. And I'm a Gilmore Girls fan.
Like Reply Delete