Where To Watch Shop Store Contact
Home / Stories / The same deer appeared on The Rifleman multiple times
Did you know?Westerns

The same deer appeared on The Rifleman multiple times

The eight-point buck always seemed to get away!

For many classic television programs, especially Westerns, stock footage was essential to tell their stories and build their worlds. Sweeping shots of grand landscapes, huge herds of cattle, and long wagon trains just weren't possible to get any other way. Well, at least in Los Angeles movie lots. Plus, many shows had access to libraries of footage stockpiled by the studios — why not take advantage of it?

The Rifleman was guilty of reusing footage as much as the rest of them. Even recycled shots of North Fork were cut into multiple episodes.

One interesting piece of film that appears numerous times is a clip of a deer running into a forest clearing. The buck trots out under a large overhanging tree and looks around. Sometimes Mark and Lucas see it while hunting and other times they see it while just riding through the countryside. No matter the circumstances, the scenes usually end with the animal high-tailing it back into the woods.

Both "The Angry Man" and "The Score is Even" feature the deer in the opening scene. The former starts with the McCains on the hunt and the latter with father and son out riding when the deer catches Mark's eye. He suggests they shoot it but Lucas reminds him how far they are from home and that the meat would be wasted, something a hunter should never do.

In "Skull," Mark sees a deer (well, the deer) and begins to follow it. While climbing to get a better vantage point, he slips and falls down a cliff, setting off a tense and dramatic episode.

The most notable use of the scene is in "End of the Hunt." Not only is there plenty of other deer footage in the episode, the animal actually gets a name! He's a legendary eight-point buck named "Old Spike" that Mark has been after for years. While Lucas faces off against an old (human) enemy, Mark gets his chance to shoot his prize. His view is exactly the same as one that he, and sharp-eyed viewers, have seen many times before.

It's perfectly understandable why this particular piece of film would be reused so many times. It can be challenging enough to shoot with trained animals let alone ones you have no control over! And in the end, it's the story that the clip helps tell that's the most important thing – and on The Rifleman, it's always a good one.

Did you know?
Both Lucas McCain and Marshal Matt Dillon went temporarily blind for one episode 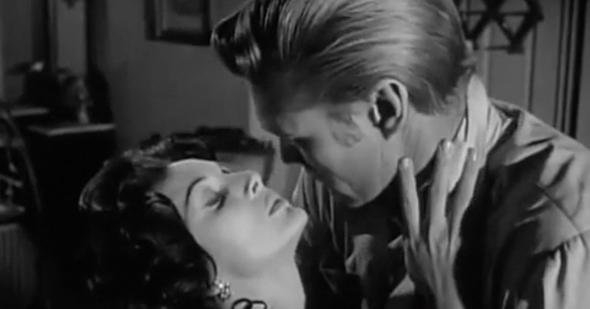 Westerns
All four of Chuck Connors' sons appeared in one Rifleman episode
Are you sure you want to delete this comment?
Close

UncleBigBad 28 months ago
The buck may have gotten away but the 120 bad guys that Lucas McCain killed during the five seasons
of the Rifleman didn't.
Mark McCain said it best..." my pa never kilt anybody what didn't need a killin'! "
Like (1) Reply Delete

Mkeith613 28 months ago
I always wondered what continent that deer was filmed, I’ve never seen that species in America
Like Reply Delete

AgingDisgracefully 28 months ago
Many believe the deer kept reappearing because it was lured by the manly aftershave of Paul Fix.
Me? I'm not convinced.
Like Reply Delete

justjeff 28 months ago
Just remember one thing about these Rifleman episodes... "the buck stops here"....
Like Reply Delete

justjeff 28 months ago
Re-using stock footage is probably as old as Hollywood. In the "Adventures of Superman" (because of its low budget) no matter where Clark was, that darned alley was always nearby - or the rock formation - and when he was flying, how many times did he pass the same buildings or have the hills drop down until he was shown up in the sky? How often did the episodes start with a stock shot of the LA Freeway and the Hall of Justice (acting as Metropolis)? Even the flying sequences were stock. Look closely as Superman flies in the opposite direction (facing right)... it's a flipped shot - and the "S" on his costume is backward.
Like (2) Reply Delete
texasluva justjeff 28 months ago
Or the time the crook shot at him and bullets bounced off then throws gun and Superman ducked, LOL. Man of steel- bullets no problem but guns really hurt
Like (1) Reply Delete

Or drag a file here to upload
texasluva 28 months ago
When Mark set his sites for the deer some questions came into his mind. "I just decided maybe I...I've been after him for too long. I wanted him until I got close enough to get him...then I saw him up close...he wasn't like I thought he would be...he was sorta raunchy lookin' and patches of hair out of him. He saw me...he looked right at me...but his eyes were sort of tired like...like as if he were trying to say...you wanna win? Well then go ahead and shoot 'cause it means an awful lot for you to win...and it means nothing to me to lose." Mark learned a valuable lesson. Something that you've been after and wanted. Wasn't as important as you thought it was. This was after his pa Lucas was shot and recuperating.
Like (1) Reply Delete