Where To Watch Shop Store Contact
Home / Stories / The case of the missing laugh track in ''Opie the Birdman''
Did you know?Opie

The case of the missing laugh track in ''Opie the Birdman''

Did the Andy Griffith Show need a laugh track? Academics tried to find out. 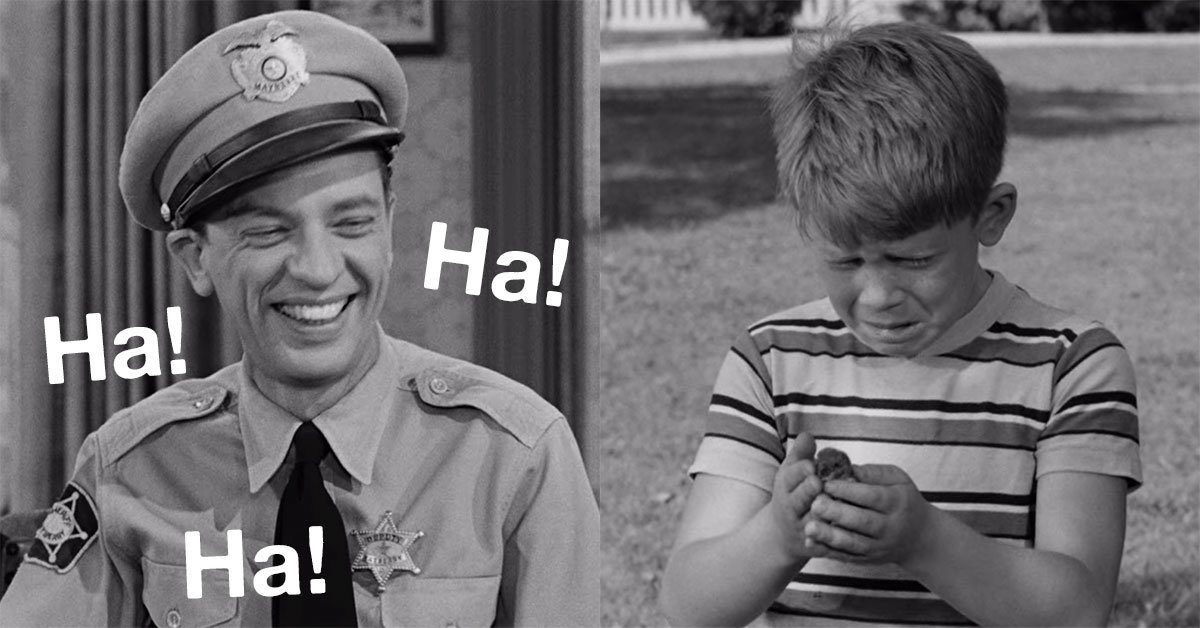 The Andy Griffith Show opened each season with the spotlight on Opie. The comedic talents of Don Knotts may have delivered the most laughs, and Andy's name may have been in the title, but the sitcom relied on the acting skills of adolescent Ronny Howard to kick off each new year.

Just look at the first episodes from each season: "The New Housekeeper," "Opie and the Bully," "Mr. McBeevee," "Opie the Birdman," "Opie Loves Helen," "Opie's Job," "Opie's Girlfriend," and "Opie's First Love." Each of the eight seasons begins with an episode about Opie Taylor. In those early years, Howard shows off his acting chops with tearful moments and growing pains. From this perspective, one could argue he is quietly the central character of the series. After all, he earned the first big laugh of the entire series when he objects to Rose's marriage in the opening moments of "The New Housekeeper." 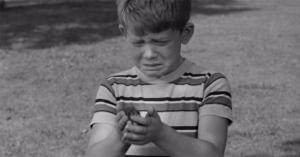 Speaking of laughter, there is an interesting tale when it comes to "Opie the Birdman," which some fans hold in esteem as their favorite episode of the entire series. Like the other Opie-centric season-openers, this is a coming-of-age tale. The boy kills a bird with a slingshot and the act eats him up inside. Opie commits to raising the orphaned baby birds — which he has named Wynken, Blynken, and Nod — after taking away their mama. It hurts even more as he himself can identify with these motherless chicks.

Certainly, this particular plot is not funny. When Opie cries, our eyes get a little dusty, too, we must admit. But this being The Andy Griffith Show, laughter is had, especially when Barney expounds his expert knowledge of tweezers, wild animals, birdsong and goldfish death rates. The episode ends with a big laugh when Barney mistakes a radio in Andy's desk drawer for the sound of talking fish.

As with every episode in the series, this uproarious moment is accompanied by a laugh track. The Andy Griffith Show did not film with a studio audience, at the insistence of the star, who preferred the quieter moments that working without spectators allowed.

However, when Paramount released a DVD collection of The Andy Griffith Show - The Complete Fourth Season in 2005, a handful of episodes, including "Opie the Birdman," lacked the laugh track. This led to confusion and complaints on fan forums, like here and here. Some tried to recall if "Opie and the Birdman" ever had a laugh track — after all, it is a rather serious episode. When you watch it on MeTV, you will find the laugh track. The missing laugh track was a DVD pressing error.

The story does not end there. In 2007, researchers at Cleveland State University's School of Communication used "Opie the Birdman" to study the effects of laugh tracks on viewers. The results were later published in the Journal of Broadcasting & Electronic Media in 2009. 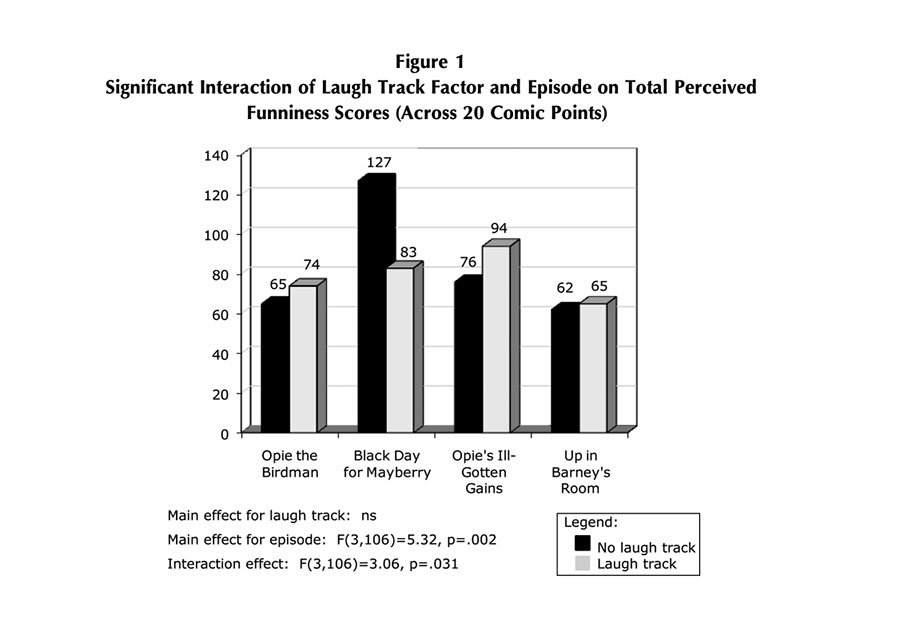 Journal of Broadcasting and Electronic Media, 2009

The study showed four episodes — which happened to be the episodes from the DVD with the missing laughter — to 114 people, both with and without the laugh track. The above chart shows the results, as the researchers quantified the "funniness" of each episode with a lengthy survey following the episodes. The funniness of "Opie the Birdman" was found to be insignificantly heightened by the presence of a laugh track. (Interestingly, the audience found "Black Day for Mayberry" to be much funnier without the laugh track, which the paper goes into length to understand.)

Anyway, it gets pretty academic. The fact is, scientifically, the show is funny. Did you ever come across the missing laugh track? 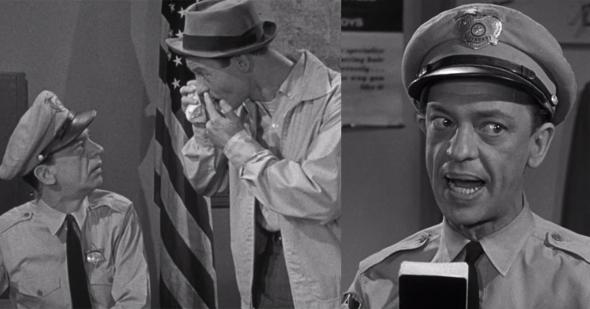 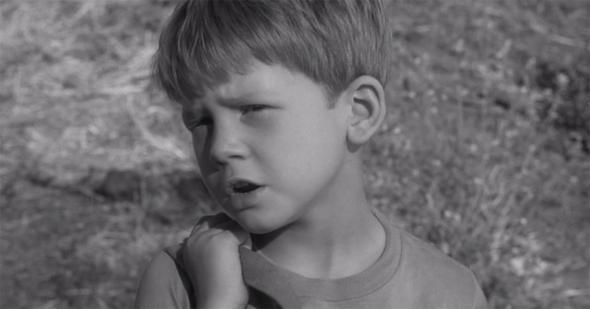 Nostalgianews1960sOpie
Ron Howard proves he can still expertly skip stones down at the fishin' hole
Are you sure you want to delete this comment?
Close

WavSlave 25 months ago
I've always wondered how / why MeTV shows the occasional episode of Hogan's Heroes with no laugh track at all. Several of them air that way. (I'm sure this has nothing to do with the channel itself.) As awful as laugh tracks are in general, jokes in shows such as HH land with a distinct thud when there's nothing but silence in the background.
Like Reply Delete

Pacificsun 27 months ago
The difference being tracked is akin to watching a (in this case) a comedy in the theater or alone at home. Group experience (perception) is more powerful. When one person smiles at something, triggers a common reaction. Wouldn't someone feel self-conscious sitting stone-faced, or unmoved, in the midst of a group with a different consensus of reaction?
Like (2) Reply Delete

harlow1313 Pacificsun 27 months ago
I can only speak for myself, but I would be ashamed to pretend something is funny when I don't find it to be so, just to be a part of the herd.
Like Reply Delete

Pacificsun harlow1313 27 months ago
Interesting response. 😉 Are you okay with being the only one laughing perhaps? (Just a thought).
Like Reply Delete

harlow1313 Pacificsun 27 months ago
That's a good question. I would like to think that laughter is an automatic response. But I'm not sure that I have been in the situation where I felt inclined to laugh when no one else did, but I don't remember. In theaters, it seems like there is no shortage of laughers, so it is hard to laugh alone.
Like (1) Reply Delete

27 months ago
I HATE laugh tracks on any show. It sounds canned, fake.
Like Reply Delete

Pacificsun Pilaf 27 months ago
I've learned to tune them out.
Like Reply Delete

Wiseguy 27 months ago
Many series that used laugh tracks had episodes that were missing the laugh track: The Odd Couple had "Oscar's New Job" (done on purpose), Bewitched had "Hippie, Hippie, Hooray," Hogan's Heroes had one or two including "Bombsight." The Flintstones had "Sheriff For a Day." I recall seeing an episode of Get Smart without a laugh tracks but don't recall the title.
Like (1) Reply Delete

Wiseguy 27 months ago
When the laugh track was introduced to "The Jack Benny Program," Jack Benny complained that the laughs were too loud and that just saying hello to the "audience" got too much laughter and insisted the laughs be toned down.
Like (1) Reply Delete

ncadams27 27 months ago
I feel a good laugh track enhances a show, just like good camera work. It’s when it’s bad that it becomes annoying. It should pull you into the scene and become part of the dialogue, just like we do when we laugh and smile in real life as someone is talking with us or we are in a group listening to others.
Like (2) Reply Delete

ncadams27 27 months ago
I remember a story about a writer who, upon hearing the laugh track added to his show, complained that his best jokes weren’t getting enough laughs. He convinced the sound editor to go back and turn up the laughs. Watching the final version on TV with some of the cast and crew, he gloated “I knew these jokes were funny”
Like (1) Reply Delete

harlow1313 Moody 27 months ago
I; too, am a fan of that show. I love Karen, and Ben is a close second.
Like (1) Reply Delete
Moody harlow1313 27 months ago
One of my favorite episodes was Karen's meeting with the headmistress at her school after she wrote a long letter outlining what she thought was wrong with the school. The look on her face at the end was priceless!
Like Reply Delete

harlow1313 Moody 27 months ago
Yes, I like that the headmistress got the upper hand on Karen in that one, which was a bit unexpected.

One that kills me, if I remember it right, is when Ben has called Karen a "toss-pot" and a "lezzer." I like when Karen says, "I particularly don't like being called a lezzer."
Like (1) Reply Delete

Wiseguy harlow1313 27 months ago
It is a misconception to think that a laugh track is there to tell you what is funny. It is there to create a communal feeling of watching a play with a group of people. At such events, you hear other people laughing and that is what a laugh track recreates.
Like (1) Reply Delete

harlow1313 Wiseguy 27 months ago
That sounds reasonable. I personally do not like them. Shows like "The Office" and "Malcolm in the Middle" didn't use them, and I think it works well.
Like (1) Reply Delete

teire 27 months ago
This is very interesting, I can easily imagine Opie the Birdman without a laugh track. I can’t imagine it without the swelling music that helped give it such emotion — that’s what I remember when I think of this episode. That and Andy's line about the trees. Good story.
Like (2) Reply Delete