Stock up on cans while you still can.

Yes, they still make Tab. The Coca-Cola soda first appeared in 1963, but the pink aluminum cans became a symbol of the diet crazes of the late 1970s and early 1980s. Like aerobics, leg warmers and leotards, Tab was a must accessory for the hip fitness-conscious, like Millennials with their La Croix. The distinctive, divisive taste of Tab, which came from a cocktail of artificial sweeteners including saccharine, set it apart from Diet Coke.

In the decades since, Tab has faded in popularity to cult status, as loyalists search the bottom shelves in grocery aisles for scant cases of their calorie-free nectar. According to Food & Wine, Coca-Cola "only" sells about 1.5 million cases of Tab per year. (It sounds like a lot, but to put that in perspective, the standard Coca-Cola soft drink moved approximately 29.2 billion cases last year.) That Tab figure could be slimming down. 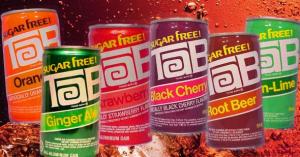 In the 1970s, Coca-Cola also tried to expand its diet soda with a variety of Tab flavors

The New York Times reports that the North Carolina-based Coca-Cola Bottling Company Consolidated, the biggest independent bottler and distributor of Coca-Cola products in America, has discontinued offering Tab in its 14-state territory, which includes Ohio, Kentucky, Virginia and D.C.

“After careful review, we recently removed Tab 12-pack cans from the portfolio of beverages we offer,” the company declared in a statement.

In response, Tab drinkers are stockpiling — and starting petitions. Their beloved chemical cola could be going the way of Veep and Simba.

No wonder Tab is going for about $4 a can on Amazon.

eddiec 40 months ago
Diet sodas in the '70s had such a bitter aftertaste. I remember the commercials that try to make diet sodas like TAB more appealing, like this one that features Lori Loughlin (Full House) as the cheerleader with the leg cast.
Like Reply Delete

pumkinheadfan 49 months ago
I say good riddance! I remember seeing it in a grocery store one while picking up snacks on a road trip. So I picked up a 12 pack. I had about a half of a can and I was done. It tasted like darkened carbonated water. It was gross. Talk about the original non-cola....they weren't making that up!
Like Reply Delete

Dicazi 49 months ago
Used to be my pop of choice. I still remember getting so angry when I pushed the Tab button on a vending machine and got a Sprite.

I rejoiced about 10-15 years ago when I saw a reformulated Tab at Kroger. It tasted terrible, nothing like the original.

MrsPhilHarris 49 months ago
Never tried it

stephaniestavropoulos 49 months ago
"Stockpiling," is that a more polite, nicer way of saying Tab is being hoarded? Tab was huge when I was in high School! There was a room at the school that was called Canteen where the younger girls {I went to an all girls Catholic school.} would go if they had free period, or during lunchtime. {There was also a cafeteria.} There were at least two vending machines {possibly a third , which I doubt, because of the cafeteria that might of had chips, and possibly those little cans of food.} one for candy, and one for pop. I remember there was Coke in there, Fresca think and one or two others. One of those others was Tab. That pink can was really popular among the Juniors and Seniors! I can remember on more than one occasion, at least one of the garbage bins was filled with nothing but Tab cans! It's as if they had a separate bin, just for them! I want to say that drinking Tab was the "In" drink of choice, and cigarettes because so many of the Js&Ss drank it.. {They did their smoking and drinking upstairs, in a room called Hilltop.} The Tab slot on the vending machine always seemed to be the first selection that needed refilling.
Like Reply Delete