She started acting on TV when she was 16 but got thrust in the public eye after marrying Tom Hanks.

Rita Wilson has a presence that seems to warm up the screen, and we felt that from her earliest roles on TV.

When she was 16 years old, she memorably guest starred on The Brady Bunch to kick off her onscreen career, and by the time we saw her on M*A*S*H a decade later, she was still taking on bit parts despite her seeming "it factor."

There was at least one person who saw so much more potential in Rita Wilson than TV had given the budding actor so far.

Bosom Buddies star Tom Hanks was married when he first met Wilson on the set of his show, but he told Knight-Ridder News Service in 1993 that she made an immediate impression on him.

"Love at first sight?" Hanks said. "Sure, I guess it exists. I knew I was in trouble when I met my wife."

Wilson was engaged at the time, but the two actors formed a friendship that blossomed into love after Hanks divorced his wife and Wilson broke off her engagement.

In 1987, Hanks proposed to Wilson on New Year’s Eve and by the next year, they were married.

They’ve been married ever since, becoming an iconic Hollywood couple that epitomizes the ideal marriage, and pretty soon after they had their first son, Wilson said suddenly her image changed.

A critic in 1996 encapsulated this shift when they wrote for Knight-Ridder News Service that "Wilson is everybody’s idea of the perfect mom" because "she’s the first actress filmmakers think of when they’re casting a mother." 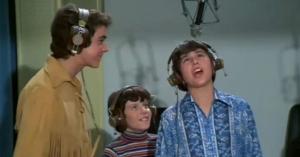 In the Nineties, Wilson played motherly roles in hit movies like Now and Then and Jingle All the Way, and because she never was considered the leading lady type through the beginning of her career, she totally embraced the image.

"I am a mother, in real life," Wilson said. "In this business, it’s never been my image to be the sex-bomb character who has to maintain an image in that way, otherwise people won’t relate to me sexually. That’s not an issue to me. It doesn’t come up."

Perhaps this is the most perfect anecdote to show what a picture-perfect mom Wilson had become:

"I went into labor on Christmas night after I’d cooked the turkey and eaten it," Wilson said. "I was very happy I didn’t have to miss Christmas dinner because you do all that preparation, get the house beautiful, get all the toys. Can you imagine being in the hospital and not being able to open gifts with your kids on Christmas morning?"

In her career, Wilson said people always assumed that she was jealous of her husband for achieving greater success as an actor.

"Oh, people have always thought that about me," Wilson told The New York Times in 1996. "You know, ‘It must be really hard being married to Tom because he’s so famous and you’re so….’"

But Wilson said she had so much respect for her husband, there was never room for jealousy in their relationship.

She told Knight-Ridder News Service in 1996 that the only problem she had with being so famous for her marriage was that sometimes casting directors failed to realize that she could be more than someone’s ideal mom onscreen.

"If I were just an actress not married to somebody who’s in the public eye and being honored so beautiful by my husband who’s in the public eye, then I would have some sort of anonymity," Wilson said. "And because the body of work I had is not as public as my relationship with my husband, sometimes people have preconceived ideas about what I am and what I can offer to a role." 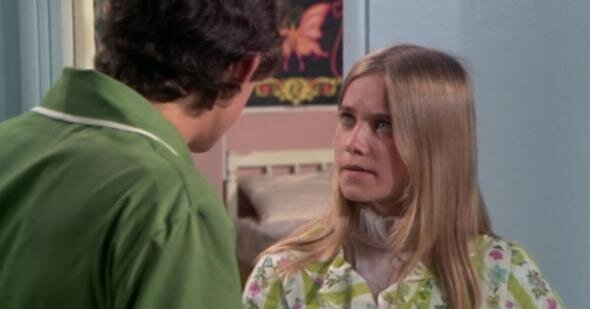 How well do you remember The Brady Bunch episode ''My Sister, Benedict Arnold''? 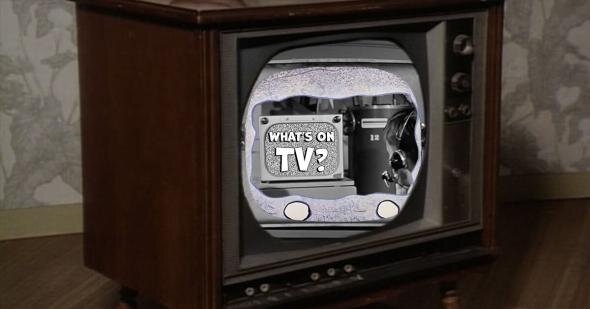 What’s on TV on these TV shows? 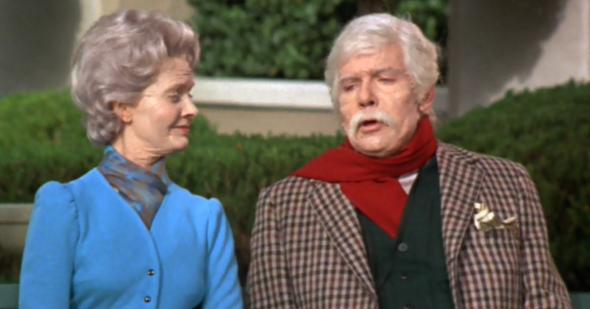 Are these cantankerous TV characters talking about Boomers or Millennials?
Are you sure you want to delete this comment?
Close

MikefromJersey 8 months ago
Tom Hanks is one of my faves, a modern Henry Fonda.
Tragically his son Chester is a total waste of space, he beat up his girlfriend, threatened
to harm her children, was arrested for drunk driving, the list goes on for this punk.
Amazing how decent people can do everything right and still have a meat head
for a child.
This is why Alan Alda refused to move his family to Hollywood, he flew home
to Jersey every friday for 11 years while doing MASH, taking the red eye back
to CF Sunday night. He is still married to the same woman, raised 2 fine
girls, so it was worth it.
Like (2) Reply Delete

JustGeri 8 months ago
I liked her as the sister (in law?) character in Sleepless in Seattle.
Like (1) Reply Delete

Nala92129 8 months ago
Rita "Wilson" is the Nancy Reagan of this millennium. Same types of roles.
Like Reply Delete

bradyguy Nala92129 24 days ago
And riding her husband's coattails??
Like Reply Delete

TheDavBow3 8 months ago
I love the movie, "That Thing You Do!". They were both great. Great music also. I love movies like that.
Like Reply Delete

bagandwallyfan52 8 months ago
Rita Wilson was a guest on the Happy Days episode called Where
The Guys Are from season 11.
Where The Guys Are is the episode
Where Potsie Anson Williams and
Chachi Arcola Scott Baio and
Roger Phillips Ted McGinley took
Fonzie Henry Winkler to a singles
resort called Lake Whitefish to
meet single women because
Fonzie and Ashley Pfister (Linda Purl) broke up.
Rita Wilson played Barbara McManus the woman Fonzie was
talking to at the singles resort
near the end of the episode.
Tom Hanks was in a funny episode
Of Happy Days called A Little Case Of Revenge where Dwane Twitchell
(Tom Hanks) wanted to fight ARTHUR FONZARELLI (FONZIE)
Because Fonzie pushed him off
a swing .Tom Hanks wrecks
Arnold's Drive In and Arnold Pat Morita can't believe what he's
Seeing.Dwayne Twitchell told
Fonzie that he was a psychiatrist.
Like Reply Delete

bagandwallyfan52 bagandwallyfan52 8 months ago
Bobby Melner Harris Kal and
Flip Phillips Billy Warlock were
scared and so so was everyone
Else at Arnolds Drive In when
Tom Hanks started wrecking
Arnold's Drive In.
Like Reply Delete

JustGeri bagandwallyfan52 8 months ago
Greg was on HS committee to pick next head cheerleader. Marcia was one of 3 finalists. Another finalist cozied up to Greg thinking he’d vote for her. Greg thought it would be ok because he was only vote. In the end the other guys split the votes and Greg was the deciding vote. He chose Rita Wilson’s character believing she was the best. Marcia forgave Greg, agreeing with his choice. The other finalist broke up with Greg.
Like Reply Delete

JustGeri bradyguy 14 days ago
Three, not four
Like Reply Delete

WordsmithWorks 8 months ago
She beat out Marcia and "Greggie's" faker girlfriend for head cheerleader and dumped Hawkeye for a more interesting older gentleman, so how can you not like her? Plus, she has 81 IMDb credits (mainly one-offs, but so what?), which is not too shabby.
Like (5) Reply Delete

LoveMETV22 WordsmithWorks 8 months ago
Yes she has an impressive (maybe not epic) but still impressive bio. Love that phrase "not to shabby."
Like (1) Reply Delete

Michael vinman63 8 months ago
That would have been close toher first significant role.

Checking imdb, she was in Cheech & Chong's Next Movie. Andthe classic Volunteers from 1985. Tom Hanks strs in that is there a pattern?

LoveMETV22 Michael 8 months ago
I think Rita and Tom worked together on several occasions before being married. They work on many projects together presently or more recently, and seem very supportive of each other.
Like Reply Delete

Michael LoveMETV22 8 months ago
I think it's just coincidence, apparently she was on Bosum Buddies too. But given they did get married, the earlier intersection become more significant.

LoveMETV22 Michael 8 months ago
The two first met on the set of "Bosom Buddies." Then later worked together on "Volunteers." Although Hanks was married to Samantha Lewes at the time, he separated from her. He and Wilson dated for a couple of years and later married. They make a nice couple.
Like Reply Delete

Michael 8 months ago
I'd much rather hear about her appearances on the Brady Bunch and MASH. This starts suggesting that, but is simply about her offscreen life
Like (1) Reply Delete

LoveMETV22 8 months ago
Great actress, married to a great actor as well. Aside from her appearances on The Brady Bunch and M*A*S*H she has appeared in other classic series like Lou Grant, Chips, Hawaii Five-O Or 0 whichever you choose, Happy Days and numerous others. According to the bios on her she is quite active in the entertainment industry not just in acting roles but others as well.
Like (2) Reply Delete