Mary Lansing played more Mayberry characters than any other actress

Before she was Martha Clark, she was Mrs. Lukens, Mrs. Rodenbach and many more. 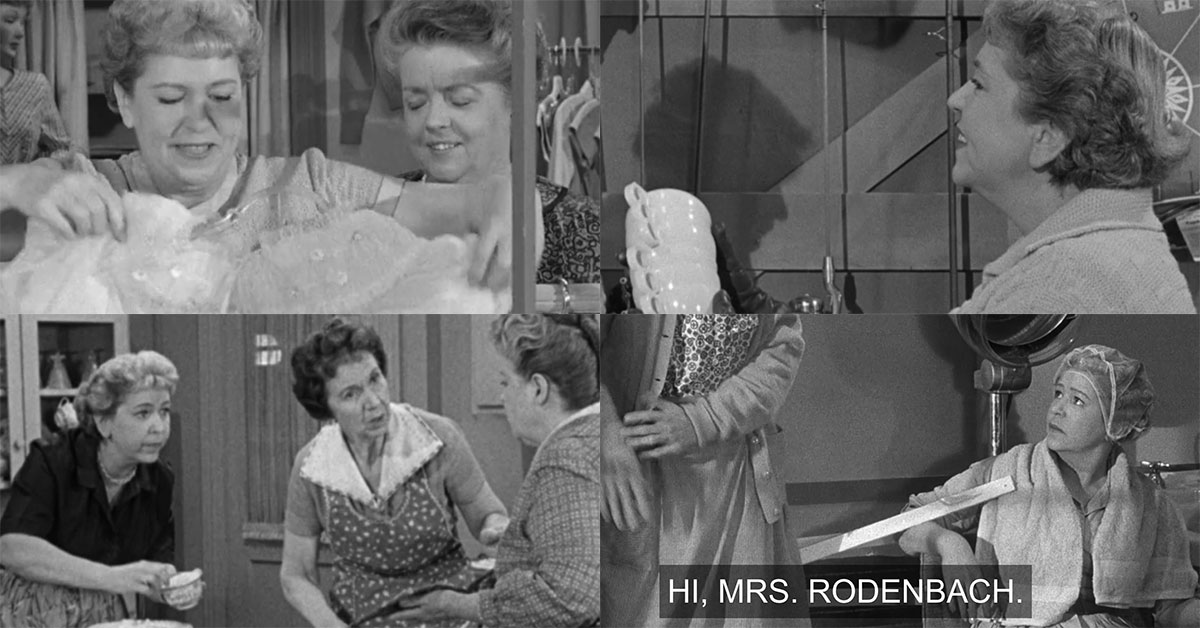 There are those faces you see again and again on The Andy Griffith Show. No, we're not talking about Opie and Gomer. We mean the minor characters, those random friends of Aunt Bee, upset citizens, farmers, business owners, eccentrics, etc.

To make matters even more confusing, the production enjoyed using the same batch of actors to play multiple characters. Also, there was very little consistency with continuity. For example, take Burt Mustin, best known as the old man Judd — but sometimes spelled Jud or named Jubal.

Mary Lansing is the best example of these Mayberry bit players. She often played different characters one single week apart.

In "The Bed Jacket," she is Mrs. Lukens, owner of a clothing store that Aunt Bee frequents. Seven days later, she popped up again in "The Bank Job," getting her hair done. Only, this time she was Mrs. Rodenbach, as Barney addresses her. 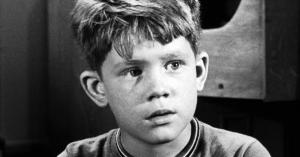 In fact, Lansing played at least 13 different characters in the Mayberry universe. She is best known as Martha Clark, wife of Emmett, and she settled into that role during the sitcom's color years and carried over into the spin-off Mayberry R.F.D. Prior to that, however, she was Miss Primrose, Miss Roundtree, Dorothy, and Mary. She made her debut in "The Merchant of Mayberry," as Mrs. Mason, a shopper buying six China cups.

All in all, her 13 various characters make her the actress with the most roles on The Andy Griffith Show. Robert McQuain arguably appeared more, but when he's billed as "Newlywed Man" or "One of the Jenkins men," it's difficult to tell if he's truly playing different guys.

So, who was Lansing? She made her debut in Happy Days — no, not the Fonzie sitcom, but rather a 1929 movie. Her voice could be heard in two classics. In Disney's Bambi, she was Aunt Ena and Mrs. Possum. A decade later, she was heard but not seen in I Love Lucy, as the voice of Cynthia in "Ethel's Birthday." She is heard as the voice of a character in the stage play Over the Teacups.

Martha Clark was her last major role. She worked on just one more show after that, in 1974, a bit part in the largely forgotten Apple's Way. She would live 14 more years but never act again. 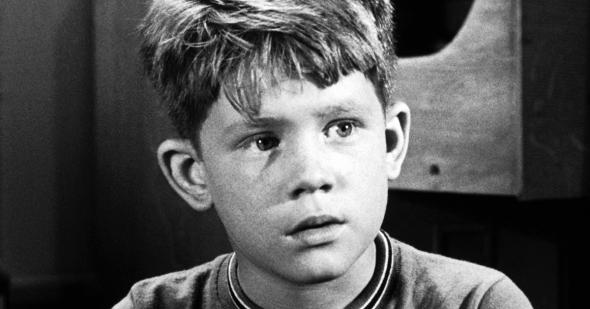 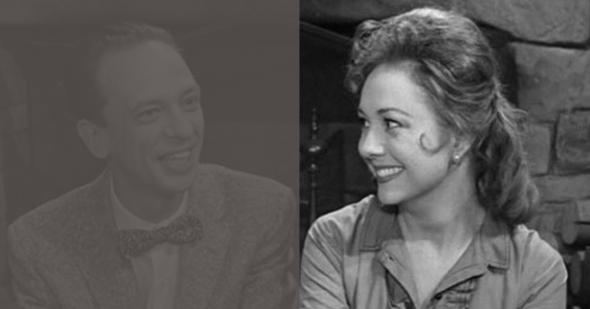 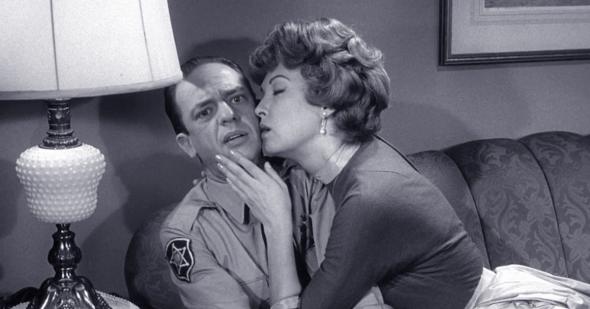 Mayberry
Beverly Tyler quit acting shortly after Barney Fife rejected her
Are you sure you want to delete this comment?
Close

Lacey 5 days ago
When anyone wants to be an "actor" they really want to be a "movie star." However "stars" come and go so fast it is hard to remember their names a few years later. Character actors have steady, if largely unrecognized, careers spanning decades. Actors like William Schallert, Ralph Manza, Edie McClurg, and yes, even Mary Lansing.
Like Reply Delete

KirwoodDerby 11 days ago
I, being really heavily invested in my favorite sitcoms, have always hated when the same actor on the same show plays a different character. Damn it, you just used this person last week (or month, or season) why can’t you just keep track of what you named him. Does it really make that much of a difference? Or does that person then become a regular prompting higher pay or something of that nature?
Like Reply Delete

Runeshaper 19 days ago
Mary Lansing was the woman of many characters! WOW!
Like Reply Delete

bagandwallyfan52 21 days ago
Moriyah
Have you seen the METV Ad
Where Gomer Pyle is using
his camera to take a photo
Of the Happy Days persons
(Al Fonzie and Potsie and
Ralph and the Cunningham family-Chuck.
Like Reply Delete

LindaRussellJohnson 21 days ago
Thanks for posting this. I always enjoyed seeing Mary on TV, especially on TAGS. IMDB says she was married to actor Frank Nelson, who had a lot of different roles on I Love Lucy ( Freddie Fillmore, Ralph Ramsey etc).
Like (1) Reply Delete

HeytoGomer 22 days ago
If I'm not mistaken,Mary Lansing and Lucille Ball were very close friends.
Like (1) Reply Delete

LindaAnnCreel 22 days ago
I have always thought On the Bed Jacket show that Andy was saying Hey Good Lookin and reading this now I have come to realize he was actually saying Mrs. Lukens 🤦🏻‍♀️
Like (1) Reply Delete

Andybandit 22 days ago
It is cool when Actors and Actresses play different roles on the same show.
Like (2) Reply Delete

daDoctah Andybandit 22 days ago
I've been working for some time on a fan-written quiz for this site about people who made appearances on the Dick Van Dyke Show as multiple characters. My current idea is to show a picture of a character actor working at the time as seen in something else altogether, and then ask "did [person X], seen here in [movie or TV show Y], appear on TDVDS once, twice, more than twice, or not at all?"
Like (1) Reply Delete

bagandwallyfan52 daDoctah 22 days ago
Character Actors Herbie
Faye and Ned Glass both
Appeared on The Dick Van
Dyke Show and TV Banter
With Joanne had an Article
About Actors who Look
Alike and.Herbie Faye and
Ned Glass were in the Article.
Like Reply Delete

LoveMETV22 daDoctah 22 days ago
That's cool. Are you submitting it soon? Don't give us to much info ahead of time. Look forward to seeing it. Good luck.
Like Reply Delete

daDoctah LoveMETV22 22 days ago
My biggest problem is figuring out how to submit it with the photos that need to go along (a lot of these people are ones you'd be unable to name but you'd see them and say "oh, *that* guy!"). My second biggest problem is coming up with a handful of the ones who never did the show but you might think they did.

It's not a spoiler to say that I won't be including Herbie Faye, since he played the same character on TDVDS multiple times. Ken Berry's another one like that (two appearances, but the same character both times).
Like Reply Delete

Zip 23 days ago
And here I thought Allan Melvin played a lot of different characters on TAGS! Not to diminish Mary's appearances, I guess I just remember Allan's characters more.
Like (2) Reply Delete

Big3Fan 23 days ago
Thomas Yakhoob , aka Tom Jacobs, appeared in seventy two episodes of TAGS as an uncredited townsman. He was also Danny Thomas's older brother. They shared one prominent facial feature. Can you guess which one?
Like (1) Reply Delete

ncadams27 23 days ago
Dragnet was known for having a group of actors who would appear in multiple episodes playing different characters.
Like Reply Delete
Load previous comments

bagandwallyfan52 bagandwallyfan52 22 days ago
Tricky Trivia Questions:
What does Cpl. Boyle on
Gomer Pyle USMC have in
Common with Richies
Older brother on HAPPY Days?
What do Eddie Munster
Spike (Happy Days) and
Actor Gordon Jones of
The Adventures of Ozzie and Harriet and the Eddie Cantor movie Strike Me PINK (1936)/have in common?
Russell Johnson played
The Professor on Gilligan's
Island but what was the
First and last name of the
Professor?
What was the name of the
Actor who played the Professor in the PILOT of
Gilligan's Island?
A lot of persons thought that this movie actor played Chester Anderson on Leave It To Beaver but
It wasn't true .
Like Reply Delete