How did a hard-boiled detective turn up on a sitcom? 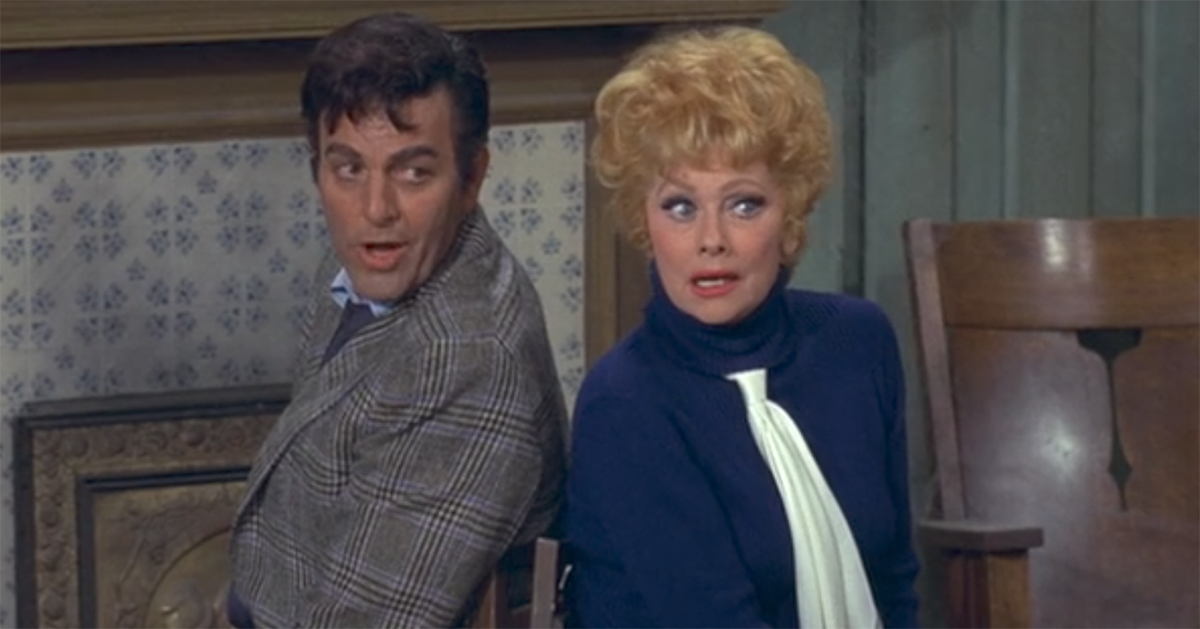 Mannix was konked over the head again and again on his hit P.I. show. Elsewhere in TV land, Lucy met a constant stream of celebrity guest stars — from John Wayne to Superman — on hit sitcoms like I Love Lucy and The Lucy Show. So perhaps it was inevitable that at some point Lucy should whack Joe Mannix over the skull with a vase in 1971. Still, it stands as one of the most unpredictable cameos in television history.

In 1971, Lucille Ball was on her third smash sitcom, Here's Lucy. While it remains overshadowed by her earlier successes, the CBS comedy ran just as long as the other two, six highly rated seasons. In season four, the episode "Lucy and Mannix Are Held Hostage" did just as the title explained — it tied together America's toughest detective and most beloved daffy redhead. Literally. 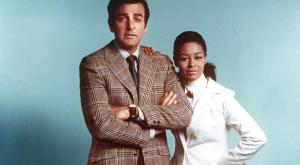 On paper, the plot sounds a bit dark. While at work, Lucy spots two burglars committing a robbery through the window. The crooks spot her, and come to the office the next day to squeeze Harry, her boss, for info on her whereabouts. They lock Harry in a closet. Harry hires Joe Mannix to protect Lucy. Of course, Lucy mistakes him for a bad guy and smashes a blue flower vase over his head. He's used to it. At least in this instance, he passes out atop a nice sofa.

Soon, the two aging hoodlums, dressed in stereotypical mobster wear, enter and capture the two. Lucy and Mannix then find themselves bound by rope to chairs in what seems to be a haunted house from a Scooby Doo cartoon.

Of course, this is all played for laughs, with some brilliant physical comedy as Lucy bounces about in her chair and dials a rotary telephone with her nose.

To put this in perspective for younger viewers, it'd be akin to the Miami Vice cops turning up on Golden Girls, or Jack Bauer on Parks and Rec. So how did this melding of action hero and slapstick comedy come about?

Well, Mannix was originally produced by Desilu, the production company helmed by Lucille Ball. In its original conception, Mannix was more a high-tech spy series, with Joe Mannix working for an agency called Intertect. It was Ball who wanted to bring the show down to earth, ditching the computers and turning Mannix into a hard-boiled private detective.

Her retooling arguably saved Mannix as a series, just as she had saved Star Trek. It was well within her right to bring a little levity to the character and plug him into a sitcom.

The Mannix character made just one other television crossover, turning up years later in a 1997 episode of Diagnosis: Murder.

Pacificsun 13 months ago
Lucille Ball had an instinctive eye for viewer appreciation. I wonder if she could articulate her thinking as well as just putting it into action.

Not many people were as talented before the camera as they truly were behind the scenes.
Like Reply Delete

jaelinsmith40652 24 months ago
Nice that Lucille Ball met Mike Connors glad that she like about him coming to her show I watched it on YouTube as a video about it.
Like Reply Delete