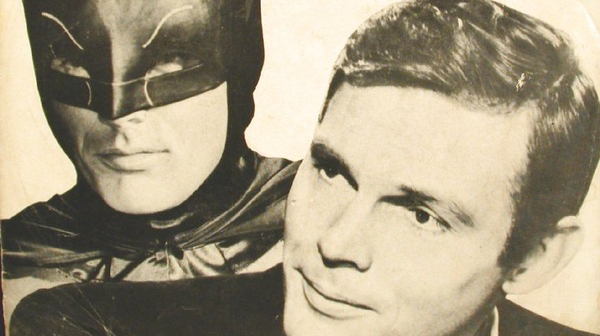 Happy Tunesday, when we dig through the dusty bins of pop music's past for curious treasures. Today, we look at release from television's Batman, a.k.a. Adam West.
In 1966, Batman dominated pop culture will its fresh and campy take on the comic book detective. Though it's hard to believe now in our superhero-saturated world, the character was far from popular at the start of the 1960s. DC Comics was considering killing the title, but in 1964 instead shook up the sci-fi oriented crime-solver with a lighter tone. The TV show pushed that tone even further into playful, irresistible bubblegum. Batman skyrocketed in popularity.
Young mods were smitten. In 1966, surf duo Jan and Dean covered the television show's theme song on a Batman concept album. Likewise, the Who ripped through the theme song on their Ready Steady Who EP just months after the show's debut. The Kinks (and eventually the Jam) notably covered the tune, too.
Naturally, the studio wanted in on some of that radio action. Hence this lighthearted shuffle. In the tune, West puts on the cowl to woo the titular Miranda. He works up the nerve to remove his mask, despite the constant interruptions of Robin.
The Boy Wonder begs Batman to come fight a giant octopus and a villain named Mr. AC/DC — no relation to the hard rock act. It's a fun, weird ditty that brings to mind Lee Hazelwood. Also, it's refreshing to hear Batman have a love life. The growling, moody character of today could use a kiss. The show's theme song does make a slight appearance in the reoccurring organ riff. Check it out below.
And let's petition DC Comics to bring back Mr. AC/DC, The Electric Brain!
Watch Batman every Saturday at 7PM/6C on MeTV.