“I have to be able to prove that I can fit in,” she said. Though she was only in a few episodes, a Cartwright bride was headline news at the time. 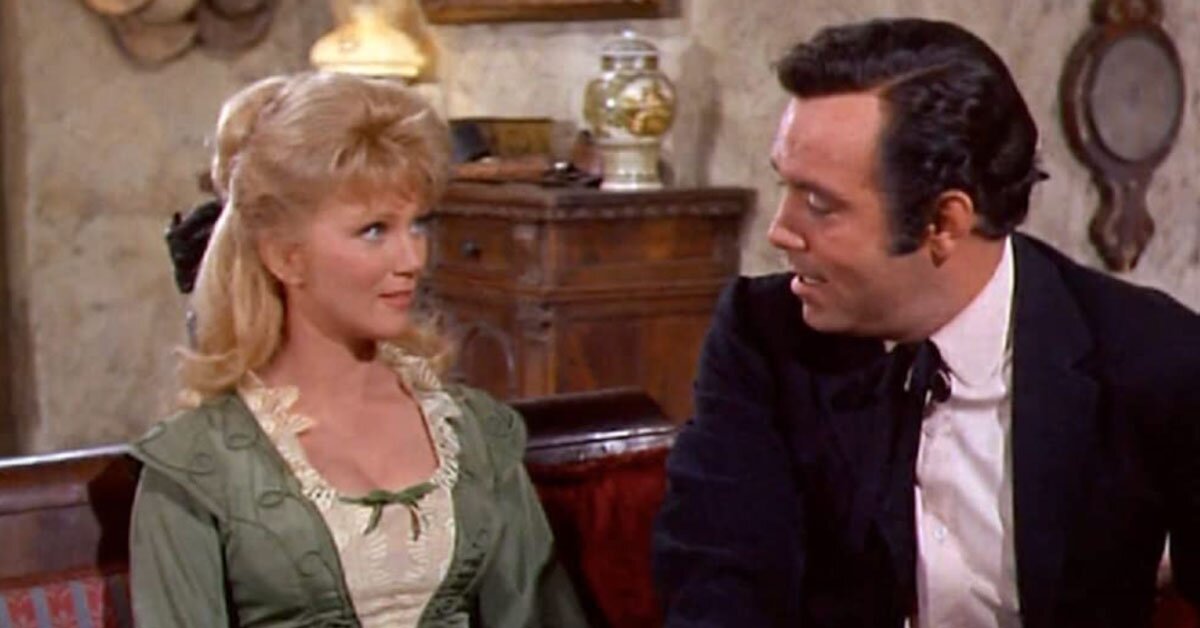 Many long-running series reach a turning point that determines the future of what the show will be. Sometimes programs lose cast members but find a new direction or bring on another actor that adds their own flavor to the world of the show.

Bonanza faced a fork in the road toward the end of its fifth season. As we’ve written about before, Pernell Roberts wanted to move on to other opportunities after playing Adam Cartwright for five years. Producers introduced Guy Williams as Cartwright cousin, Will, in the episode “Return to Honor.”

Kathie Browne, who had already come to the Ponderosa twice in earlier seasons, also joined Bonanza in a recurring role in season five. She became Adam Cartwright’s love interest and eventual fiancé. A new addition to the highly-rated cast, and a woman in fact, was quite the story in 1963.

In an article from the time, saved on a website dedicated to Browne and her husband, actor Darrin McGavin, Kathie revealed what it was like getting the role. 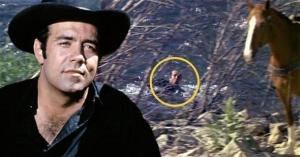 "When I first found out last spring that I'd gotten the part, I was a little leery.  I mean, I was plugging headfirst into a situation that could be a bit sticky.” She continued, “The personalities of the Cartwrights had long since been established – they'd clashed and resolved and the smoke had drifted away and everything was comfortable and settled.  Then I am injected and I have to be able to prove that I can fit in, too.”

Even though she was nervous at first, “Everyone made me feel so much at home that I just sailed right into it,” she said.

Browne also gave a few interesting tidbits about each of her costars. Of Roberts, she said, “I discovered immediately that Pernell is extremely serious about his work; he's a real perfectionist.  We hashed over that script for hours, down to the smallest nuance.  He's the same on the set.  He's very analytical: everything is always well planned.”

She also inadvertently told the future. “I've heard that he doesn't like the show and he's itching to leave, but let's face it, most actors on a series say that at one time or another.” She added, “Look, if Pernell really wanted out that much, he could just take a walk – right?”

Of course, now we know that’s exactly what Roberts did, but not until after Bonanza’s sixth season. The plan for season five was supposed to involve Adam marrying Kathie Browne’s character, Laura, and living happily ever after away from the Ponderosa, giving Roberts the perfect out.

Guy Williams would then becoming a regular cast member to keep four Cartwright men on the show. When Roberts decided to stay, at least for one more season, producers introduced doubt into Adam and Laura’s relationship setting the stage for the episode “Triangle” about Will Cartwright’s secret love for Laura.

But as Rose Perlberg writes in her interview with Kathie Browne, this was not the plan at the beginning of season five. “According to the master plan devised by brains behind (one of) TV's favorite Westerns, she is destined eventually to topple ol' Pernell Roberts right off his high horse and down on one knee, a-beggin' for her hand in marriage.” Adam did propose, but marriage wasn’t in the cards.

Even though she had just joined the show, Kathie Browne spoke very highly of her coworkers. She admired Dan Blocker’s outgoing nature. “This man is unbelievable.  He has the most marvelous gift for telling stories and the wildest sense of humor since they invented it.  I think that Dan could make a trip to a supermarket sound like a Great Adventure!”

Browne also revealed the fun that Blocker and Michael Landon had together on set. They would pretend to fight, especially if tourists were visiting that day.

“Mike challenges him and Dan takes a poke at Mike.  Mike returns it and they go at each other fiercely. The tourists – and believe me, the set is always jammed – don't know what to think.”

Browne continued, "If it doesn't break up with the director yelling for both of them to get on stage, Mike hollers 'Uncle,' and Dan reluctantly lets him go, and turns on one of the ladies and, with a charming smile, makes up a fantastic story about how the whole 'argument' began. The tourists love it.”

Though her time on the show was short, Browne enjoyed the experience, saying “I've also found in the last year that I enjoy being with people much more than I ever thought I could.  On the Bonanza set, I feel almost like one of the family.” 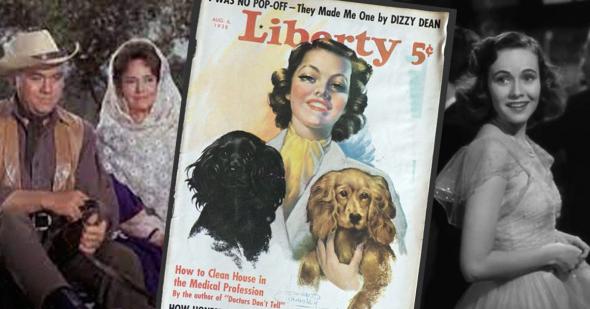 Did you know?
Teresa Wright started a huge Hollywood feud by refusing to pose with a cocker spaniel 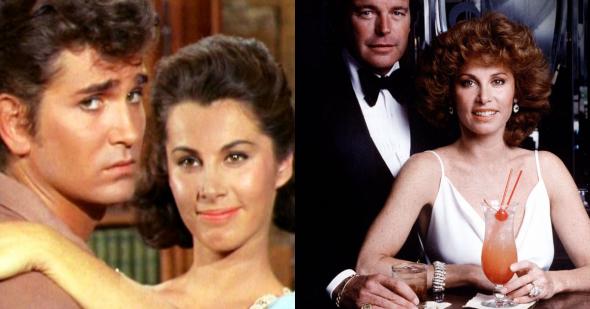 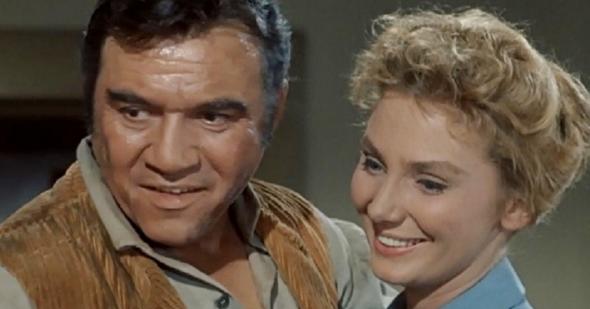 Westerns
Inga Swenson may have been Lorne Greene's favorite wife on Bonanza
Are you sure you want to delete this comment?
Close

RedSamRackham 2 months ago
* Bonanza producers/writers stroked us viewers for entire season with the Adam & Laura engagement only to have them break up at end of season with Laura & cousin Will riding away together. ♣
Like Reply Delete

StrayCat 2 months ago
I remember Kathy Browne in a Perry mason episode where they had her dressed rather conservatively and she looked so plain. Look for her in the Star Trek episode Wink of an Eye. She was nearly 40 but was stunningly attractive, and I'd wager Shatner had an eye for her as he often did for the female guest stars.
Like Reply Delete

JHP 4 months ago
maybe cause he wanted to play doctor?
Like Reply Delete

Renakatywark 5 months ago
It's been awhile since the last time that I've commented and again I enjoyed the history of the country western and the actors of whom portrayed the characters of the story videos 📹 😀 great education trivias.👸🏼😇🐕‍🦺🏡🌎🌈💗📖💪💪💪💪💪🙏🏻🙏🏻🙏🏻🙏🏻🙏🏻🌟🌟🌟🌟🌟👋👍
Like Reply Delete

BuckeyeBeth7 5 months ago
Oh! Katie Browne was the leader of the fast aliens on Star Trek (S3E11 Wink of an Eye) that kidnapped Kirk. That explains why she always looked so familiar on those Bonanza episodes. 👍
Like Reply Delete

MikefromJersey 5 months ago
Pernell Roberts was big in Civil Rights and lobbied hard for his intended to be black.
NBC was scared to death all the affiliates in the South would abandon the show
and rejected the idea. NBC finally offered to have her be an Indian but Roberts
said no.
Like (2) Reply Delete

eddiecantorfan 5 months ago
Kathie Browne and Ellen Corby both played crooks on the same season
One episode of GOMER Pyle USMC
In the episode The Case Of The
Marine Bandit and they both
tricked Pyle and Carter.

Mannixishot 6 months ago
I like Kathie Browne on the other stuff I've seen her on but I'm flat out not crazy about her character in this storyline. It's not her fault. It's the writing imo.
Like (2) Reply Delete

MaryMitch Mannixishot 6 months ago
No kidding! The "Laura" character was a mess and she and Pernell Roberts had no chemistry. But Adam and Peggy - those two were really cute together. Too bad Laura and Will took Peggy with them.
Like (2) Reply Delete

Pacificsun 6 months ago
Kathie Browne played a beautiful role in ST:TOS' In the Wink of an Eye. In what could've been a very ho-hum plot device including the jealous lover (yawn) Kathie Browne delivered some tenderness to the situation. I think it's the closest we ever "see" of Kirk actually bedding a woman.

She has a very specific personality, and no doubt won the hearts of Bonanza's crew as well! It would've been nice to read a few of their quotes about her, as well.
Like (1) Reply Delete

StrayCat Pacificsun 6 months ago
Browne was also nice to look at in the Wink of an Eye episode. Wonderful costume.
Like (1) Reply Delete