Where To Watch Shop Store Contact
Home / Stories / Jeannie's bottle on 'I Dream of Jeannie' was a limited edition Jim Beam bourbon decanter
Did you know?

"Of course, the guys who know great Bourbon aren't going to be impressed by fancy decanters." So began the sarcastic fine print in a 1964 print advertisement for Beam's Choice bourbon. In the Sixties, Jim Beam would package its high-quality stuff in fancy collector's edition bottles. The prior year, the Kentucky distillery bundled its booze in Delft Blue pottery. 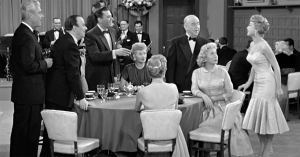 This newer "Dec. 25 bottle of Beam's Choice" from 1964 was made of "fine, smoked crystal." Jim Beam's ad copy went on to jest, "Why did we fuss with crystal decanters and big, beautiful gift packaging? Especially when we don't charge any more for it? Holiday spirit, gentlemen. Holiday spirit."

But it was not gentlemen who became most associated with the 1964 collector's bottle. It was Jeannie.

That Christmas season, Hollywood director Gene Nelson was working on a new, upcoming sitcom called I Dream of Jeannie. Of course, every genie needs a magical bottle. Nelsen was searching for just the perfect vessel for his title character when he walked passed a liquor store. The Beam's Choice bottle captured his attention. After spending about $5.99, a classic TV prop was procured. 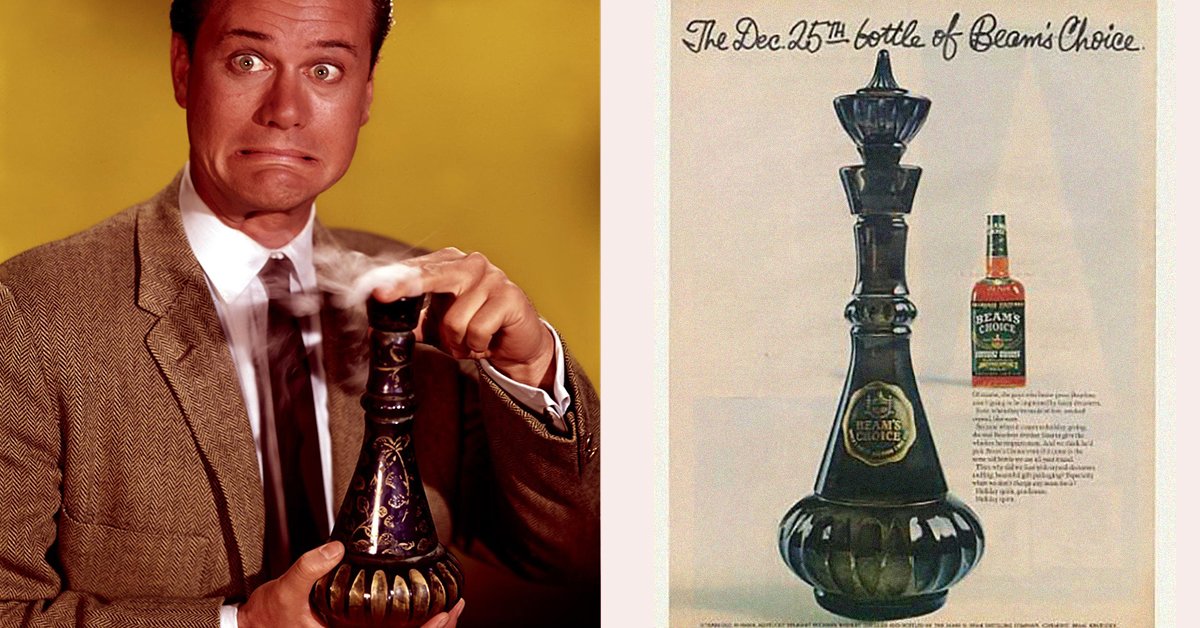 Image: The Everett CollectionLarry Hagman poses with the original Jeannie bottle. On the right, you can see the original 1964 print ad.

In the first, black-and-white season of I Dream of Jeannie, the prop bottle looked somewhat similar to its original form. It was dark, smoked glass painted with gold filigree. Only, that would not be discerned by viewers until colorized versions of the episodes were released in a 2006 DVD set.

When the show made the jump to color, the prop bottles got a bright makeover. This updated version was painted with bold metallic purple paint. You can see it up top, in the episode "Genie, Genie, Who's Got the Genie?" Part II. A third version of the bottle was crafted for Jeannie's evil sister, a green bottle to match her green wardrobe.

Over the course of the entire series, it is estimated that a dozen Jim Beam bottles were used. This factoid comes courtesy of Julien's Auctions, who sold off the first I Dream of Jeannie prop bottle earlier this year. It sold for a whopping $34,375. It was owned by Gene Nelson himself, according to Barbara Eden's certification of the artifact. Years earlier, a purple bottle sold for $10,000.

But, if you want to make one yourself, now you know how. (Or, you could just buy one from jeanniebottles.com.)

DaveEmel 32 months ago
There are as never a bottle created for Jeannie's sister on the show. Her bottle was shown once in "Jeannie or the Tiger". It was an unpainted Jim Beam bottle.
Like Reply Delete