The Beverly Hillbillies. Petticoat Junction. Green Acres. Paul Henning had a hand in all three shows, but one of these things is not like the others.

Green Acres was the third show to involve Henning, who was greenlit to create any show he liked based on the wild success of The Beverly Hillbillies and Petticoat Junction – without even having to produce a pilot (which could be costly and time-wasting if eventually shot down).

That's just how much trust they put in Henning. Described as an "offer of a lifetime" by Archive of American Television, in an interview, Henning said, "[Then-CBS President] Jim Aubrey said, 'If you will come up with a third series, I guarantee to put it on without a pilot.'"

But Henning didn't really have an idea for another show, and everybody knows Jay Sommers created Green Acres, with Henning as an executive producer. Well, it was Sommers who Henning had written The Beverly Hillbillies with, and he had just the notion of where they could find fodder for more great TV.

Henning said, "He came to me with a bound volume of radio scripts dating from 1950 called Granby's Green Acres. As I recall, it was about a banker or a fellow who worked in a bank in a city, who longed to be a farmer, and I glanced at the series and said, 'I think this will be perfect.'"

All they had to do was change a few names and places, and suddenly "Granby's" Green Acres was easily reimagined to be set in Henning's Hooterville. This saved a lot of money, Henning said, which the studio also really liked. It seemed there was nothing Henning and Sommers could do that could go wrong, so they did what nobody else was quite as prepared to do in the 1960s: They decided to get creative with this third entry in the Hooterville universe, and do some things no other shows were doing, starting with the show's opening credits.

From the second season of Green Acres on, if you sat around through the credits, you would notice that names even viewers at home tend to ignore, like the writers of the episode or the executive producer of the show, suddenly became impossible to ignore. That's because rather than have the credits roll blankly over the opening scenes as nearly every other TV show had done, Green Acres decided to make the credits a necessarily observed part of the scene – by having its characters directly interact with them. 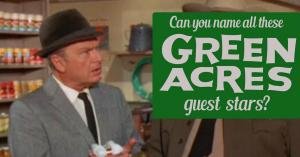 Who are all these TV stars who appeared as guests on Green Acres?

That meant if Lisa Douglas was making breakfast, she'd flip a pancake to see Paul Henning's name crisply printed on its cooked top, taking time to look directly into the camera, then tilt her head and shrug, basically inventing a move that made John Krasinski of The Office so famous. Other times, the credits would come bouncing out of the corner of the screen, attacking characters who ducked and swatted away the names. Episode after episode, the show got more creative with these bafflingly meta interactions, which sound closer to something a modern show would do than a TV classic like Green Acres. Watch the video at the top of this post to see for yourself how creative they got with the credits!

Eventually, these unusual credits became known as "the names" to Eva Gabor's character Lisa Douglas, who would comment on things like the timing of when they appeared, practically making the same observation a casual fan would on the couch. It was nutty stuff, but directly in line with the playful nature of the show, which all started with the head of CBS telling Henning, "As long as you say it's okay, it's okay with me." 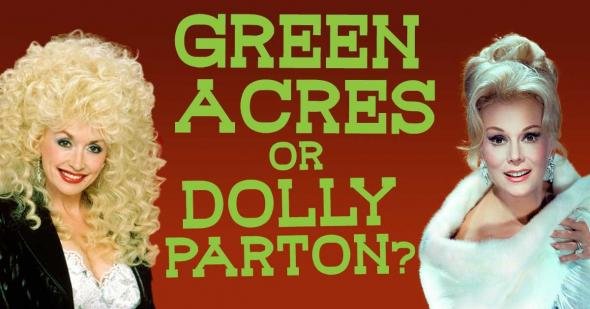 1960smusicquiz
Can you tell the difference between a Green Acres episode and a Dolly Parton hit?
Are you sure you want to delete this comment?
Close

JoeSHill 8 months ago
One of my favorite "GREEN ACRES" episodes was "Double Drick!" because the episode toyed with the "BATMAN" comic book pop-up words like "BUH-ROOOMM!" and KAH-PUEY!", along with CRACKLE" and "CHUG-A-LUG CHUG-A-LUG", and, of course, DRICK! you couldn't get any funnier than what Paul Henning, Jay Sommers, and director Richard L. Bare did for this show! and the really funny credits, especially the one that accosted "Mr. Ziffle" (Hank Patterson), chasing the "Directed by Richard L. Bare" credits, which had to be THE funniest thing I've ever seen in any TV show! "Lisa Douglas"s macabre hotcakes was another crazy laff riot! I keep expecting Rod Serling to pop up on this show saying, "This is The Twilight Zone!"
Like Reply Delete

JDnHuntsvilleAL 16 months ago
I always loved those. For a more complete list go here:

ArnoldThePig 20 months ago
Many years ago, I thought it would be a great idea to make a Hollywood movie version of Green Acres, with Steve Martin as Oliver Wendell Douglas, and Ivana Trump as Lisa... I thought William Forsythe would make the perfect Mr. Haney, but I never could figure out who should play Eb Dawson or Mr. Ziffel

Larryn75 33 months ago
THANK YOU for this video compilation — GA breaking the fourth wall like THIS is one of the things I loved as a kid, and totally makes it stand apart from the other "rural comedies."
Like (2) Reply Delete

JeffBaker 36 months ago
I caught Green Acres during its original run, and loved it in afternoon reruns in the 70s when I was in Jnr. High. If they did it these days, Lisa would look at a hotcake and say "Oooo! Look vot is says! It says 'I make 20,000 a month from home, and so can you.' (pause.) Vhy vould anyvone make 20,000 hotscakes?"
Like (3) Reply Delete

UTZAAKE 36 months ago
Just watched it on YouTube here (https://www.youtube.com/watch?v=wGx1hTusKGo), and it's excruciatingly funny. Should've just paid more attention to the episodes which I haven't watched since my youth.
Like Reply Delete

NostalgiaFan 36 months ago
My favorite Eva Gabor story. As a guest on the Mike Douglas show in the late 70s Mike said he heard she had recently had problems with the paparazzi. Eva told how she was sunbathing nude except for white gloves and wide brim hat while lying on a float in her pool at her Palm Beach home. Mike shook his head and asked why bother as the audience giggled. Eva said "A woman must protect her face and hands from the sun. The face will wrinkle and skin on the hands is thin. Both are susceptible to sun damage." Mike said "Oh makes sense" then said "Well what about the paparazzi?" Eva said she heard rustling of the shubbery outside the wall of the pool. She looked up just in time to see a man at the top of the wall nestled in the shubbery. He shouted smile for the camera Eva!" Eva shot back, "No, No! Zsa Zsa Dahling!" Mike and the audience were in hysterics.
Like (1) Reply Delete

cperrynaples NostalgiaFan 36 months ago
Speaking of Zsa Zsa, does anybody know the Johnny Carson cat story? It proably didn't happen, but it's still funny!
Like Reply Delete

NostalgiaFan cperrynaples 36 months ago
Don't know it. Please tell if you do.
Like Reply Delete

CraigGustafson NostalgiaFan 36 months ago
Zsa Zsa is sitting with a cat on her lap; she is talking to Johnny Carson.
ZSA ZSA: Would you like to pet my pussy?
JOHNNY: I would if you'd get the damned cat off your lap.

NostalgiaFan CraigGustafson 36 months ago
Okay. I remember the legend. I researched it and it did NOT happen.
Like Reply Delete

Washington 36 months ago
Try taking some English courses with your new found wealth.
Like Reply Delete

UnicornPrincess 36 months ago
Interesting! It's sometimes kinda funny when characters on a show (or movie) acknowledge that they have an audience. :)
Like (2) Reply Delete

stephaniestavropoulos UnicornPrincess 36 months ago
The Monkees did the same thing. Maybe not every episode, but at least every other episode had them breaking the fourth wall.
Like (1) Reply Delete