Where To Watch Shop Store Contact
Home / Stories / Did Gomer Pyle say ''Shazam!'' because of the comic book character? Probably, yeah.
Did you know?1960s

Did Gomer Pyle say ''Shazam!'' because of the comic book character? Probably, yeah.

Golly! Gomer has more in common with a superhero than you thought.

In 1974, the Filmation animation studio made a bold leap into new territory — live action. The production house had found great success in the Sixties adapting superheroes from the pages of comic books to Saturday morning cartoons. Filmation dazzled pajama-clad kids with colorful shows like The Adventures of Superboy, Aquaman and The Batman/Superman Hour. Even the company's non-superhero hits, like The Archie Show and Sabrina and the Groovie Goolies, were lifted from the pages of popular comics.

No wonder then that Filmation looked to another spandex-and-cape-wearing hero for its first foray into live action, Shazam! The show was based on the adventures of Captain Marvel, who had made his debut decades earlier in the pages of Whiz Comics, published by Fawcett Comics. In 1972, DC Comics licensed the character of Captain Marvel, but not wanting to highlight the name of its primary competitor, the publisher used the title Shazam! instead. 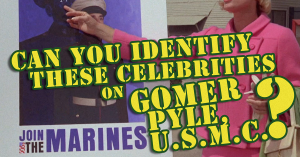 Do you know these celebrity guest stars on Gomer Pyle, U.S.M.C.?

But the young kids sitting on shag carpeting on Saturday mornings in the mid-'70s, they likely already knew the word "Shazam!" from a wholly different source.

It was one of the catchphrases of Gomer Pyle, of course, the naive Mayberry mechanic who famously joined the Marines. Gomer's verbal arsenal contained several dumbfounded exclamations, including "Surprise, surprise, surprise," "Golly!" and "Shazam!"

Only, on Gomer Pyle, U.S.M.C., when Gomer would declare, "Shazam," he would not transform into a superhero. He would only irk Sgt. Carter.

So the big question is: Why did Gomer Pyle use the word "Shazam?" Was that some kind of colloquial interjection from rural North Carolina? Was it something that actor Jim Nabors heard folks say while growing up in Sylacauga, Alabama? Did a writer on The Andy Griffith Show make it up?

Actually, by all accounts, the Captain Marvel comic books came up with the word. Both Merriam-Webster and the Online Etymology Dictionary trace the origin of "Shazam" to the Fawcett comic, circa 1940. Even the venerable Oxford English Dictionary defines it as an "invented word; earliest recorded use in the date range 1930 - 1969."

It is technically an acronym, for Solomon, Hercules, Atlas, Zeus, Achilles and Mercury. Scrawny teenager Billy Batson would shout, "Shazam!" A bolt of lightning would then strike the boy, granting him the powers and abilities of these ancient heroes, transforming him into Captain Marvel.

Could the comic book truly be the origin of this word? Most likely! We searched "Shazam" in Google Books to see the usage of the word over history in print. 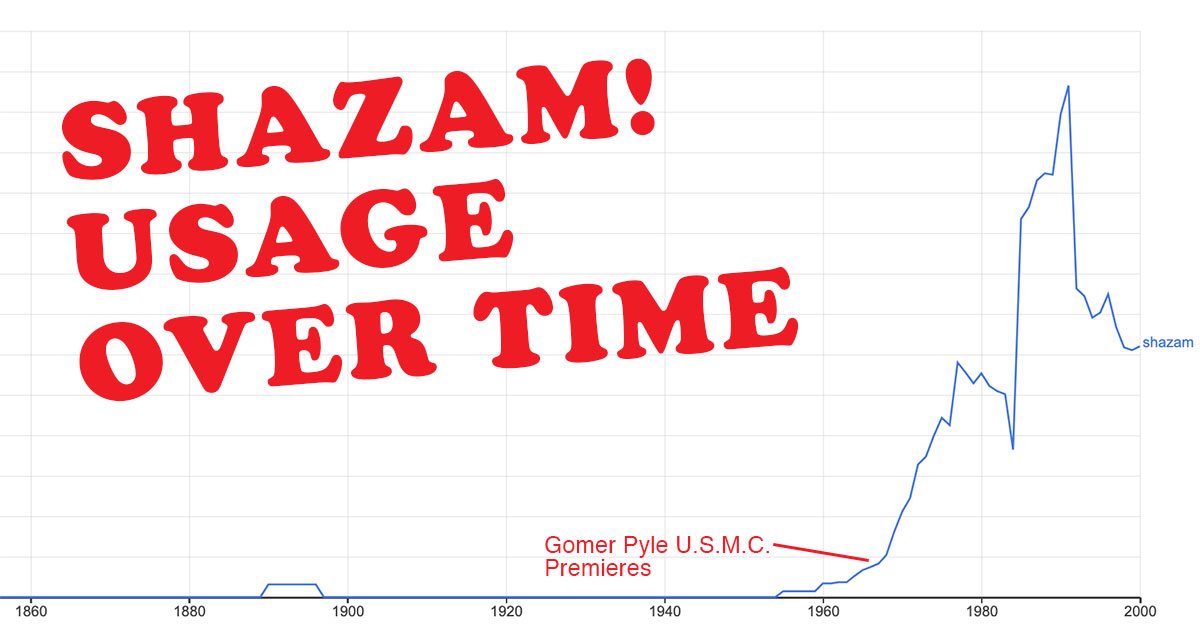 Take a look at the graph. "Shazam" didn't take off in the English language until 1960 or so, which makes sense. That corresponds with the debut of The Andy Griffith Show. The frequency explodes about the time Gomer Pyle premieres, and then spikes with DC Comics re-introducing the character.

There is, however, a curious blip in the 1890s. We tried to trace this to a source — any source — to no avail.

This does not specifically explain the motivation for having Gomer Pyle use the exclamation. But, it's highly unlikely the word came from anywhere else but the Captain Marvel comic books. Perhaps Jim Nabors or Andy Griffith read them as kids? 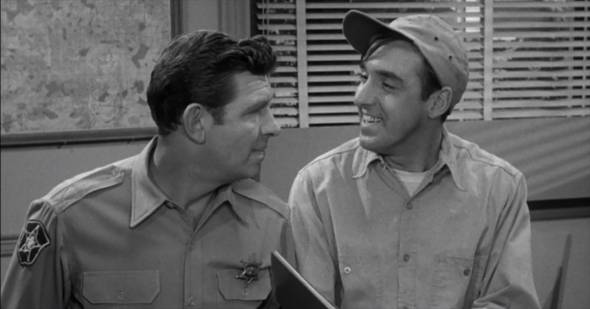 Corey 44 months ago
Captain Marvel aka Shazam was modeled after Fred MacMurray.
Like Reply Delete 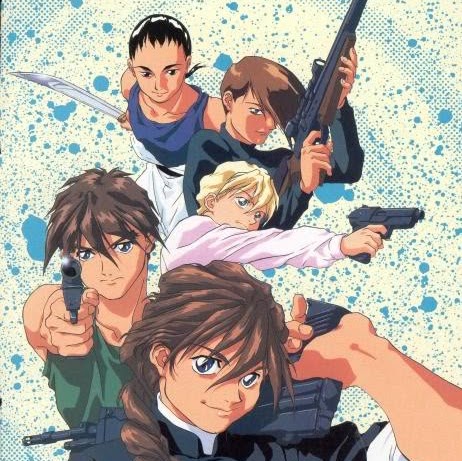 Cynthia 44 months ago
Jim Nabors was a big fan of the original Captain Marvel. He said in an interview that, during a script meeting, Andy asked Jim if he could come up with a good catch phrase for Gomer, and he replied "how about Shazam?". And as they say, the rest is history.
Like Reply Delete

Brianiac5 44 months ago
I'm pretty sure Gomer got the word from Captain Marvel. He's the right age to have read the comics as a kid in the 40s, and it's shown throughout his time on the show that he's still an avid comic book reader, even exchanging comics with Opie. And more importantly, in the Andy Griffith Show episode "The Great Filling Station Robbery" about 15 minutes in when Barney is rigging up a camera to the door of the station to take a picture of a burglar, Gomer says, "Shazam! Captain Marvel wouldn't have thought of that, Barney."
Like (1) Reply Delete

ETristanBooth Brianiac5 44 months ago
I remember Goober exchanging comic books with Opie, but I don't consciously remember Gomer doing this.
Like Reply Delete

Martin CharlesKnox 44 months ago
Captain Marvel was a very popular character in the 40s, even eclipsing Superman. This is one of the factors that lead to DC (then known as National Periodical Publications) to sue Fawcett for plagiarism, in a court case that last over a decade and ended with Fawcett settling out of court, giving DC the rights to the character. Superhero comics in general were declining by that point in favor of Crime and Horror comics.
Like (2) Reply Delete

Delmo 44 months ago
The reason DC Comics called the comic book SHAZAM! in 1972 instead of CAPTAIN MARVEL is because Fawcett didn't renew the trademark on the name in the '60s so Marvel Comics created their own version then and now had the trademark. When DC brought the character back, they could call him Captain Marvel within the comic but not on the cover so, they used SHAZAM!.
Like (1) Reply Delete

Martin Delmo 44 months ago
There was another Captain Marvel between the original and Marvel's version. Published by Myron Fass, a small time publisher in the early 60s, this Captain Marvel was an android who could separate his body parts by saying "Split" and "Xam" to later reassemble. Ill conceived and badly drawn (by Human Torch creator, Carl Burgos, who should have known better) it only lasted for a few issues before its well deserved cancellation. Myron Fass later tried to sue Marvel when Marvel introduced their own character but to no avail.
Like (1) Reply Delete

Pacificsun 44 months ago
Good gracious, one of the writers there put a whole lot of research into this Post! Great work! I'm sure "Cliff" (of Cheers fame) would be rightly proud of such deep trivia!!
Like Reply Delete

cperrynaples Pacificsun 44 months ago
Yep, just like me they spend too much time with useless facts! Not that hard to imagine Gomer reading comic books, Goober certainly did!
Like Reply Delete

stephaniestavropoulos cperrynaples 44 months ago
Well, as the saying goes: "Everybody needs a hobby!" cperrynaples, it sounds like yours is "spending too much time on useless trivia!" I guess the same saying can apply to me as well. I'm guilty as charged! I'm hopeless!
Like Reply Delete