She performed signature sketches like "Queen and Sis" and an audience Q&A as England's iconic monarch. 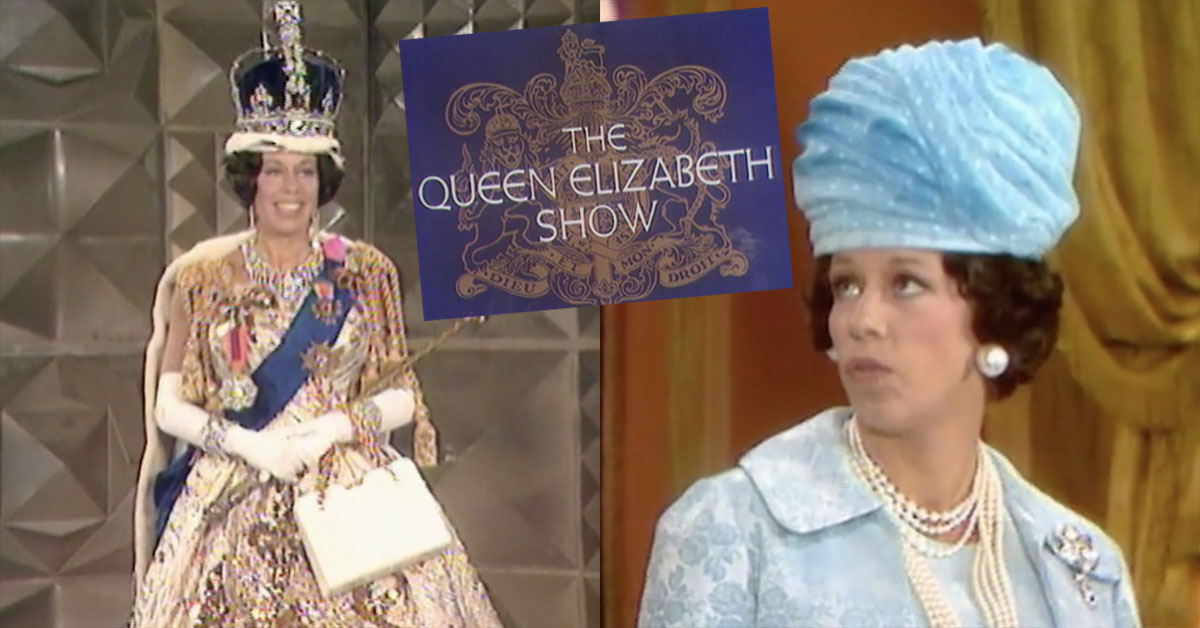 Queen Elizabeth II reigned for seven decades before her recent passing at the age of 96. Her status as the United Kingdom's longest serving monarch made her an icon to multiple generations and the target of many parodies over the years.

One loving spoof of the royal family came from the queen of variety shows, Carol Burnett. First featured in sketches poking fun at celebrity interviews, Burnett's Queen Elizabeth evolved into one of the shows best recurring characters, eventually incorporating Harvey Korman as her husband, Prince Philip, and Tim Conway as a soldier who swallowed a grenade that hallowed out his insides.

While all of Burnett's high-pitched and prim performances as Queen Elizabeth are hilarious, one episode gave the English monarch the full Carol Burnett Show treatment.

Episode four of season three, which originally aired in October of 1969, imagined a scenario where the Queen stars in her own variety show, one that looks remarkably similar to Burnett’s famous sketch series.

Coming off the success of the 1969 TV documentary that showed the royal family like they had never been seen before, Lyle Waggoner tells the Carol Burnett Show audience about the Queen’s new foray into show business.

Burnett then walks out as Elizabeth dressed in full royal finery – the costumes were always one of the best parts about the show. She takes questions from the audience, asked either by actors or possibly regular people thoroughly enjoying trying their best English accents. Among many other jokes, the Queen mentions that Prince Philip is a "fine actor" because he has been playing the part of her husband for many years. When asked about what life is like at home, she promptly ends the Q&A and exits the stage arm in arm with Harvey Korman's bashful Philip.

The parallels between the Queen’s variety show and Burnett's continue with the next two sketches. The first is a take on the "Carol and Sis" sketches featuring Vicki Lawrence as Princess Margaret, the Queen's real-life younger sister.

Next, Korman and Burnett play elderly versions of Philip and Elizabeth in a royal take on the recurring "Old Folks" sketches. With jokes about the Queen living an incredibly long life and depriving son Charles of his time as king, the sketch has turned out to be more prophetic than they could ever know at the time.

The episode ends with Burnett as the Queen singing an altered version of her famous closing song: "I'm so glad we had this time together, but it’s time to bid you cheerio!"

While everyone from Lucy Ricardo to the Beverly Hillbillies tried to meet the Queen in certain episodes, some of the English monarchy’s most memorable appearances on classic American television happened on The Carol Burnett Show. 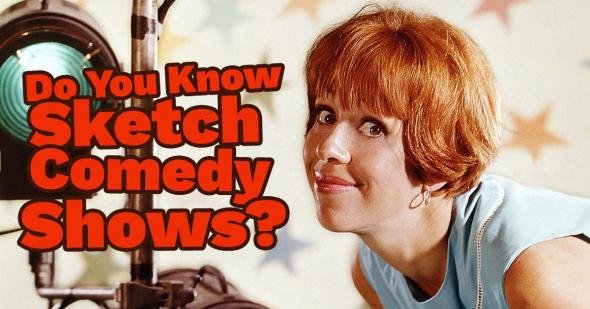 quizcomedy
Can you name all these sketch comedy shows by looking at the casts? 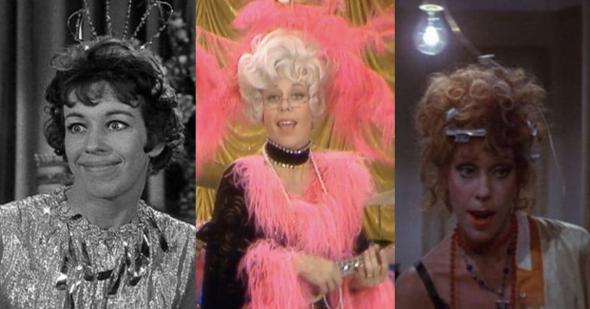 How well do you know the legendary career of Carol Burnett? 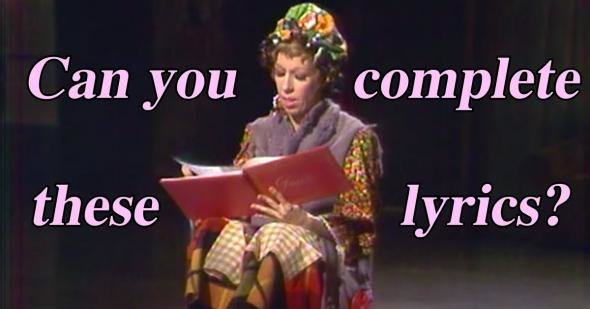 1970sNostalgia
Can you complete the lyrics to the famous closing song from The Carol Burnett Show?
Are you sure you want to delete this comment?
Close

LalaLucy 4 months ago
Never seen this but sounds great! Always loved the Queen skits. Especially when Tim was the completely hollow soldier. 🙂
Like Reply Delete

TimCarter 4 months ago
I wonder what Queen Elizabeth thought about this.
Like (1) Reply Delete

LalaLucy TimCarter 4 months ago
I'd like to think she got a kick out of it, having read about her great sense of humor, but haven't found anything about it yet.
Like (1) Reply Delete

Michael 4 months ago
All hail the Queen. Allhail the King.

We interrupt this broadcast with important Thunderbirds news. On Tuesday, starting at 9:45 pm eastern, TCM has a double bill. Thunderbirds are Go, followed by Thunderbird 6. I don't think I've seen either. They thought theatrical films would be good, but I read both did not do so well. Gerry Anderson had moved ontowards Captain Scarlet.
Like (1) Reply Delete

Both are available on Youtube for those who don't have TCM:

Michael LoveMETV22 4 months ago
TCM has run one or more of the Man from Uncle films in the past two years.

And on Sept 22, they are playing Zebra in the Kitchen (which wasn't turned into a tv series), and Clarence the Cross Eyed Lion, which became Daktari.
Like Reply Delete

LoveMETV22 Michael 4 months ago
TCM - For most is an add-on network, Cable, Satellite, Subscription. They do have a good variety of films, but that is to be expected as they draw from one of the Largest Film Libraries. However
" 𝒁𝒆𝒃𝒓𝒂 𝒊𝒏 𝒕𝒉𝒆 𝑲𝒊𝒕𝒄𝒉𝒆𝒏 " and "𝑪𝒍𝒂𝒓𝒆𝒏𝒄𝒆 𝒕𝒉𝒆 𝑪𝒓𝒐𝒔𝒔 𝑬𝒚𝒆𝒅 𝑳𝒊𝒐𝒏 " are in Youtube Movies.
However Man from Uncle Films and most likely a lot of other films are best found on TCM and similar networks. It's a great network for those that have it, however some of their movies do show up on other networks occasionally, and a few are probably on one or another free streaming platforms.
Like Reply Delete

Pacificsun Michael 4 months ago
I would be very surprised to see a MFU movie running on TCM. If any, could be the Return of the MFU - 15 years Later. Michael Sloan (writer and producer) is very generous about making his feature accessible. And "maybe" the 2015 movie. Otherwise Warner Bros. is hawkish about the availability of that label. I don't believe it's even streaming (though would love to know otherwise) because they are pushing the DVD Collection. That's how money helps cover the investment laid out for the 2015 movie.
Like Reply Delete

Andybandit 4 months ago
That is so cool. I never seen the episode. I am sure it was funny.
Like Reply Delete

RobertM 4 months ago
"The Earl of Sycamore is a yutz!"
Like Reply Delete

cperrynaples 4 months ago
Lucy got to meet the queen after her legs went out trying to curtsy! It was after that dance routine that she snuck into!
Like (1) Reply Delete 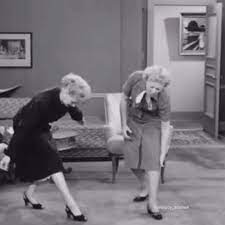 Michael cperrynaples 4 months ago
I never met the Queen, but Isaw her twice. In 1965 we were outside Buckingham Palace and she rode by on her horse. In 1976 Iwas going somewhere and a bunch of cars turned into a venue, and there wss the Queen quite visible. She was going to an Olympic event
Like Reply Delete

MrsPhilHarris Michael 4 months ago
I saw her three times. Twice in the Vancouver area and once in London at Trooping The Colour. She was still on horseback at that time.
Like (3) Reply Delete

LoveMETV22 MrsPhilHarris 4 months ago
Carol Burnett's skit aside. What an icon and truly magnificent individual she was.
Like (2) Reply Delete

MrsPhilHarris LoveMETV22 4 months ago
Indeed. When I was in school there was a picture of the Queen on the wall, and we sang God Save The Queen at assemblies. Ships are called Her Majesty’s Ship Such&such. She is on our money, our passports, etc. She has always been around. 👑
Like (1) Reply Delete

Michael MrsPhilHarris 4 months ago
I was thinking today of Air Farce. They did the royal family quite a bit, I think there was one about the corgis. The CBC should do an excerpt show.
Like Reply Delete

MrsPhilHarris Michael 4 months ago
That would be great!
Like Reply Delete

Runeshaper 4 months ago
R.I.P. Queen Elizabeth II. Pretty cool of Carol Burnett to add a spot for her character in her show.
Like (2) Reply Delete

Pacificsun Runeshaper 4 months ago
If you aren't already 🙂 you know the British have a pretty raukus sense of humor. Wouldn't you give anything to know what kind of TV the Royals 𝒂𝒄𝒕𝒖𝒂𝒍𝒍𝒚 found funny!
Like (1) Reply Delete

Pacificsun 4 months ago
In terms of appreciation, another great Post MeTV Staff!
Handled with humor, and yet relevance.

This is always a good place to check-in for sharing impressions!!
Like (2) Reply Delete

Runeshaper KMT6600 4 months ago
That sound wonderful (-:
Like (1) Reply Delete