What kid wouldn't want to be Maverick? Or the Rifleman, or Josh Randall, or Zorro… 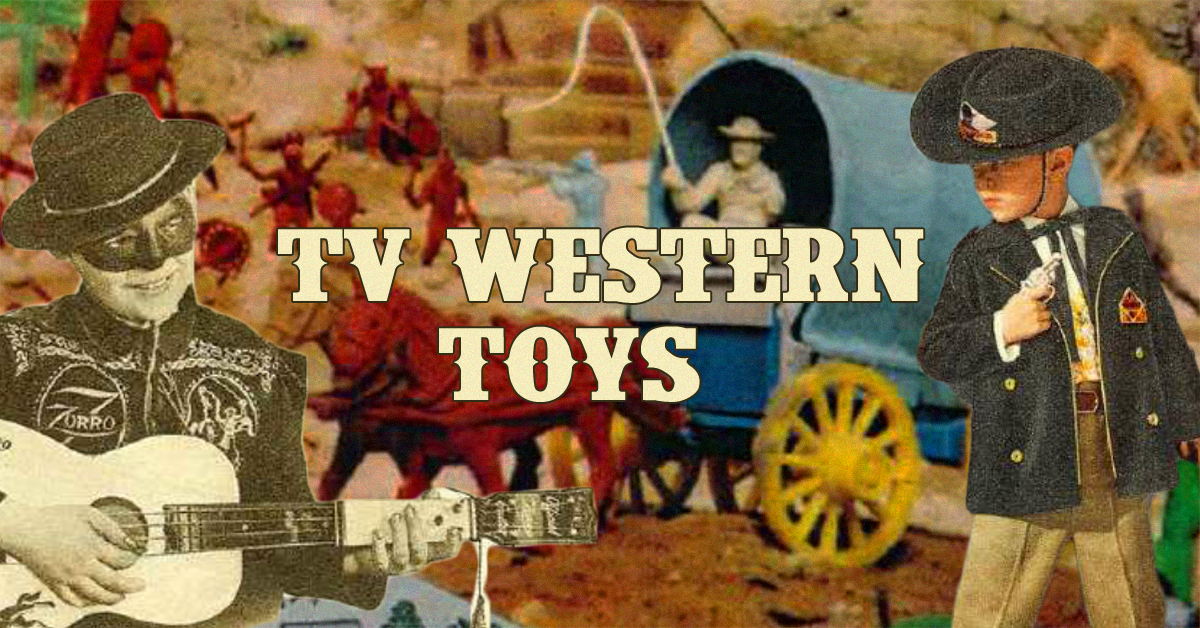 Before Spider-Man and Iron Man there was the Rifleman and Maverick. The cowboy was the superhero of the 1950s. In the Eisenhower era, kids cared more about Bat Masterson than Batman. It was the golden era of television Westerns. The genre peaked in 1959, when a stampede of 26 Western series galloped through the primetime television schedule.

Think about that for a moment. There were only three networks at the time, which were together airing an average of four Westerns each night. It's no wonder that the 1959 Sears Christmas Catalog came stuffed with pages and pages of Western merchandise — Western wear, Western figurines, and an arsenal of cap guns.

Every major Western show had a tie-in holster set. With most of these classics still airing on MeTV, we wanted to look back at some most-desired toys from the era. Did you happen to play with any of them? 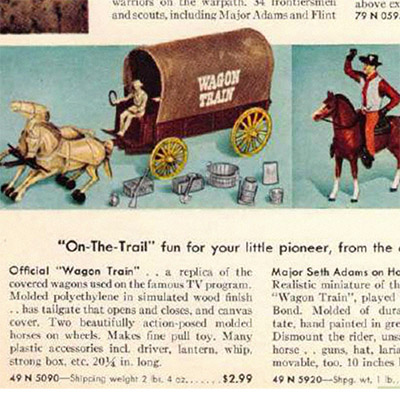 It might not have the modern name recognition of Gunsmoke or Bonanza, but Wagon Train was a massively popular series. There were pages of products based on the show in the catalog pages of the late 1950s. The image of the plastic wagon up top was part of a Wagon Train set. Here we see a plastic replica of the wagon itself, with horses, a lantern, strong box, driver, spade and wash basin. To the right is a Major Seth Adams on Horseback figure. 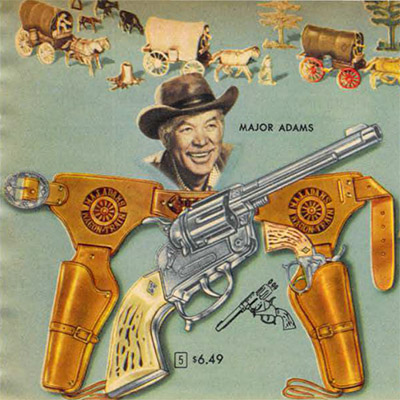 Wagon Train was one of the few shows to offer holster sets for multiple characters. Ward Bond's Major Adams likely led in sales. The actor passed away in 1960, bringing an end to an era. 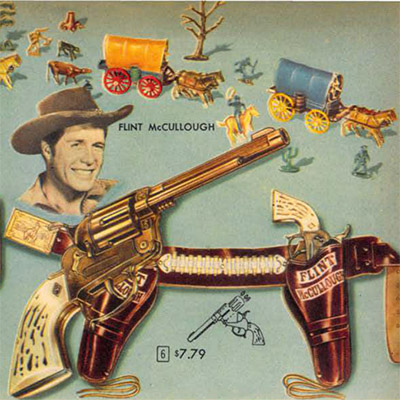 Robert Horton's Flint McCollough had a handsome holster set, too. The character appeared on the first five seasons of the series as the rugged scout of the wagon train. 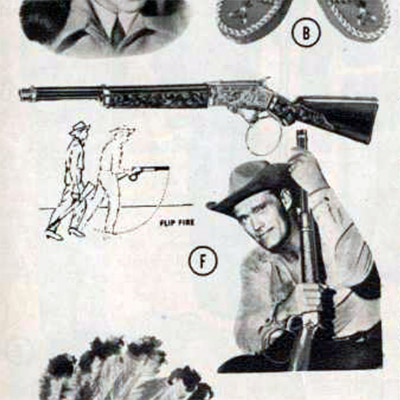 The Rifleman needed a nifty rifle, obviously. Lucan McCain could cock his weapon with a quick flip. Kids at home could perfect the move, too, with this replica of the customized Winchester. 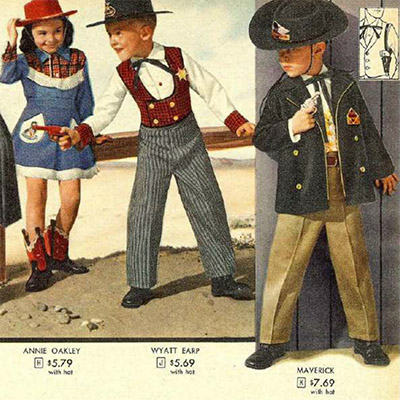 This little boy is all in on playing the role of Maverick. As you can see from the inset photo, the dapper costume came with a concealed shoulder holster. Real-life figures Wyatt Earp and Annie Oakley had their own TV shows and costumes, as well. In the 1950s, this could pass as everyday clothing for a child. 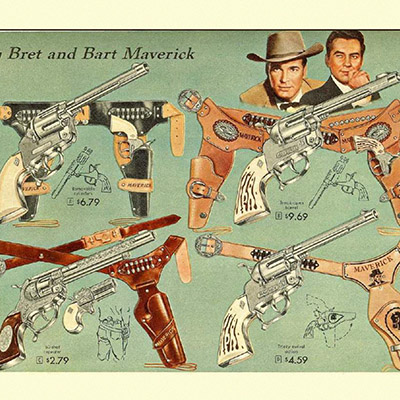 Maverick fans could choose from an array of holster sets, depending on if they leaned more #TeamBret or #TeamBart. We're guessing the James Garner stuff sold a little better. 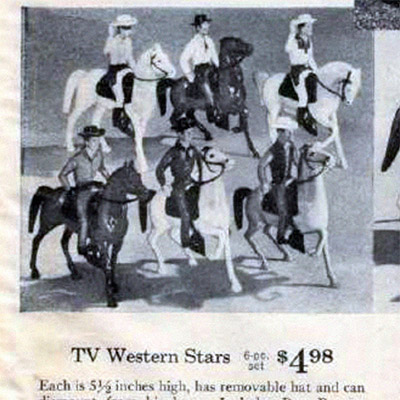 This six-piece set of figures included big guns like the Lone Ranger and Roy Rogers — as well as some more obscure characters, such as Jim Hardie of Tales of Wells Fargo. 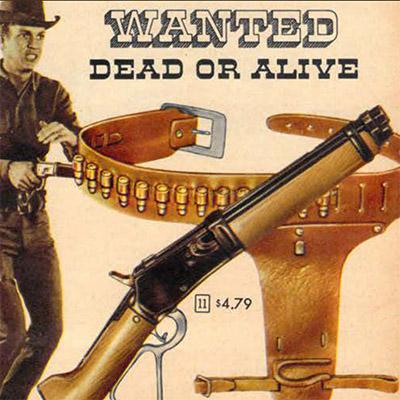 Aside from the Rifleman, no cowboy wielded a more desired sidearm than Josh Randall. The bounty hunter, portrayed by king of cool Steve McQueen, was sort of the Han Solo of his time, carrying this modified gun known as the "Mare's Leg." The kiddie version was just $4.79. Well, that's about $40 in today's cash. 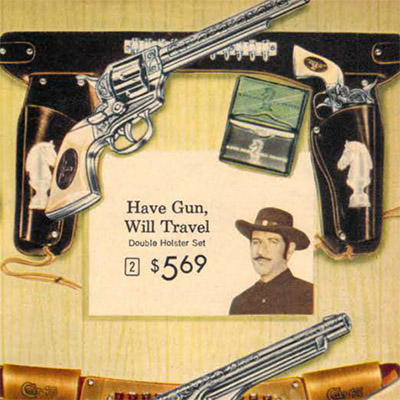 The sharp-dressed Paladin carried an ornate holster and business cards. His holster play set came with both. The price was heftier, but so was carrying a pistol on each hip. 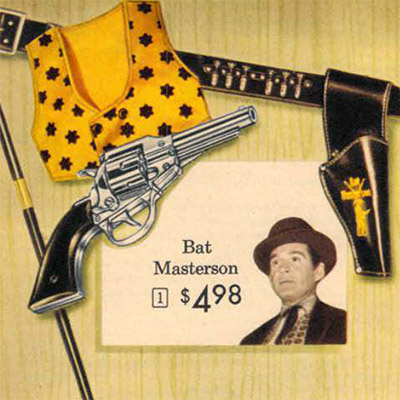 The NBC series ran in black & white, which is a shame, because the titular Bat was sporting this crisp yellow vest. The holster set came with the character's cane, too. 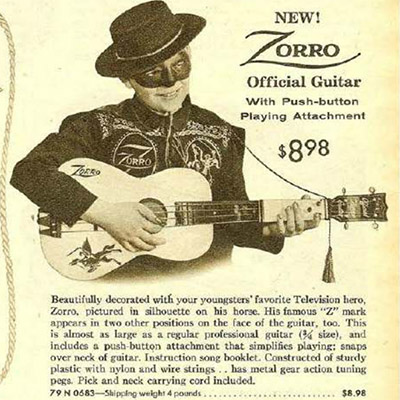 Of course, Roy Rogers guitars appeared in catalogs throughout the decade. We wanted to point out that Zorro could strum a tune, too. Well, this guitar came with a bit of a shortcut, as it had a push-button attachment for easy chord playing. 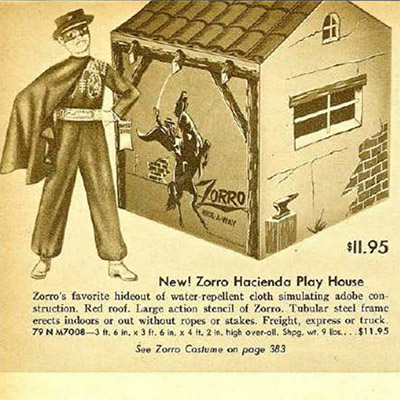 What better place to play your Zorro guitar than inside the official Zorro hacienda? The play tent was made of steel rods and water-repellent cloth. A true fan would turn to page 383 to pick up the Zorro costume to complete the lifestyle. 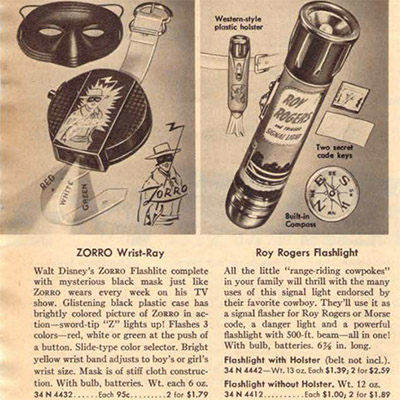 We all know the iconic accessories of Zorro — his mask, his sword… his wrist-ray? Sure, flashlights are a bit of an anachronism for 19th-century heroes, but that didn't stop toymakers from creating sci-fi-inspired gizmos like this wrist-worn shiner. The Wrist-Ray beamed red, white and green light, the colors of the Mexican flag.

SEE MORE: 10 TOYS EVERY KID IN THE 1950S WANTED FOR CHRISTMAS 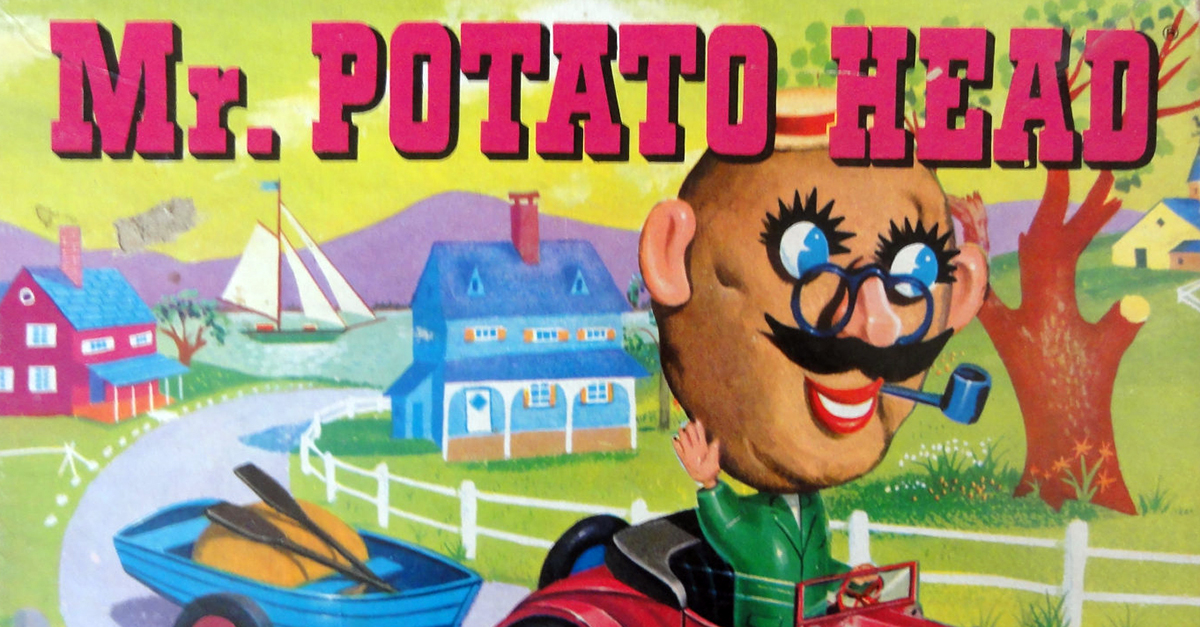