Let's not split hairs: These are classic TV's most memorable makeovers. 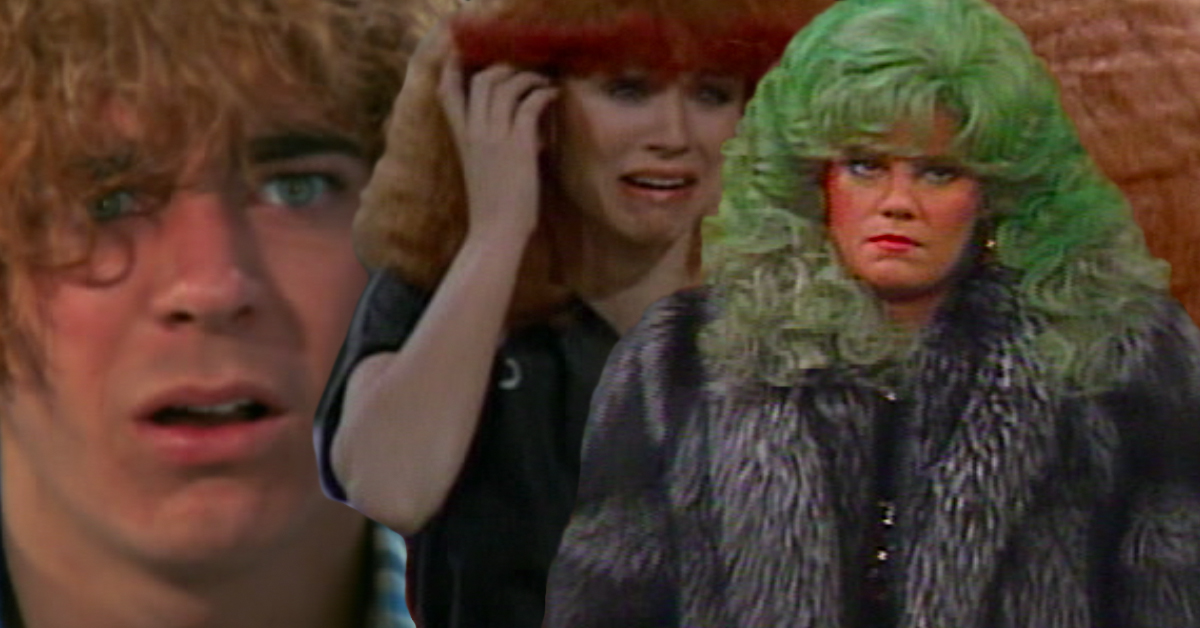 Every sitcom follows a formula when it comes to establishing its main characters. To be believable and engaging, their stars must always act, speak and look the same way. It's by making sitcom characters so dependable that allows sitcom writers more opportunity to surprise and delight viewers when they drop these characters in unusual situations. In fact, much of the hilarity of most sitcoms comes from the audience's attempt to guess how a character will react next.

It's for this reason that any sitcom episode that changes up a main character's appearance will undoubtedly become instantly memorable. Sometimes it's a character in a new uniform, tracking their first day on the job. Other times it's a full-on makeover, like turning a tomboy into a beauty queen for a night. 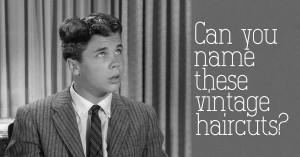 Do you remember the names of these retro hairstyles?

But the biggest way that classic sitcoms choose, time and again, to change the look and feel of your favorite characters? Give them an over-the-top haircut that's sure to stun viewers.

That's just what many of our favorite classic sitcoms did, from Greg Brady's unfortunate graduation day debacle to the famous Beaver haircut that looked like it was done with a lawnmower instead of hastily clipped with razor-sharp sheers.

So without further hairdo, we present to you our hall of fame of best sitcom bad hair days.

1. Beaver chops off random chunks of his own hair. 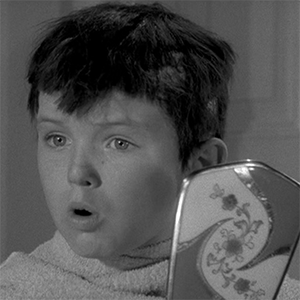 Leave It to Beaver may not have invented the bad hair day, but they perfected it. "The Haircut" remains one of the most memorable episodes of this cherished sitcom, with Beaver's shocked expression ringing true for anyone who ever did the same, snipping a little too fast and loose with home sheers in front of their own mirror.

2. Orange you glad Greg's hair was back to normal by the next episode? 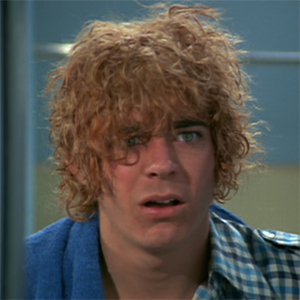 Girls everywhere gasped when The Brady Bunch dared to dye Greg's dreamy locks. In "The Hair-Brained Scheme," Greg's the gallant older brother, buying a bottle of hair tonic from Peter after he fails to sell any of it. His good deed doesn't go unpunished, when after a single use, his famous brown locks curl into a carrot-top mop. 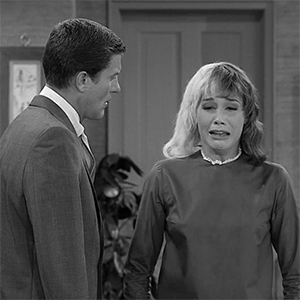 On The Dick Van Dyke Show, it's a careless comment from Rob that sets Laura off on the wild notion that she should dye her hair blonde. She spends the day with lighter locks before freaking out before Rob comes home and trying frantically to dye it back to return to her roots. Rob's early arrival soils her plan, and this weepy scene is still one of Mary Tyler Moore's funniest moments from classic TV.

4. Gilligan wakes up with white hair. 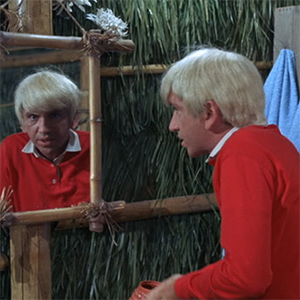 Bleach is the culprit in this hair-razing episode of Gilligan's Island that sees Gilligan's hair go as white as a sheet before it eventually all falls out. And while Gilligan isn't the only victim (The Skipper ends up bald under his cap, too!), he does have the most priceless mirror moment when he discovers his new white 'do and almost immediately lands on the extreme conclusion that he must've grown extremely old extremely fast. 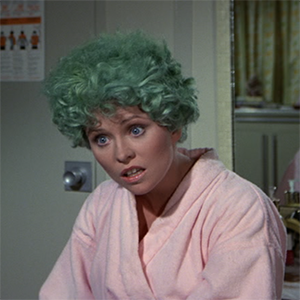 On The Love Boat, cruise director Julie McCoy changes her hair, cutting it into white, wavy, short curls that the whole crew agrees looks just awful. Instead of telling her straight, though, they try to fix it for her, resulting in this glorious green bob and an awkward heart to heart about her original hairdo.

6. Blair and Jo get extreme makeovers. 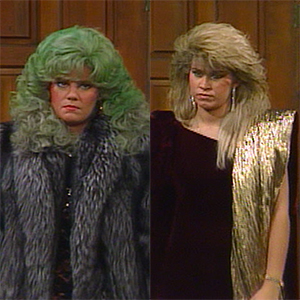 This is a case of the old switcheroo, beauty shop-style. On The Facts of Life, the girls get all dolled up for a banquet, and that means a group trip to the salon. Unfortunately for both Jo and Blair, their stylist mixes them up, turning tomboy Jo into a blonde bombshell and high-maintenance Blair into a rather glamorous Grinch.

7. Elaine trusts a new stylist too much. 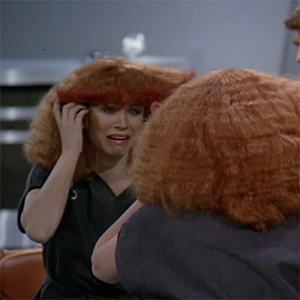 Ted Danson guest stars as the hairstylist in Taxi's bad hair day episode, "The Unkindest Cut." It sees Elaine Nardo deciding on a whim to spend a little extra on a high-end haircut. She puts her full faith in Danson's incapable hands, and ends up with even the most '80s hair enthusiast's biggest nightmare. When she leaves the salon in tears, you wouldn't be blamed if you immediately went to touch your own hair. You know, just to make sure it's all still there and how you left it.

8. Lilith gets an over-the-top perm. 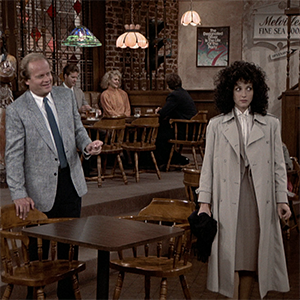 Cheers fans are used to seeing Frasier's girlfriend Dr. Lilith Sternin with her hair pulled tightly into a fierce bun. But that's not how she turned up in the episode "Where Have All the Floorboards Gone?" where Frasier innocently suggests that she change up her style and she returns looking like Cher if she got struck by lightning. But hey, at least she had the good sense not to blindly trust Ted Danson to do the job like poor Elaine did.

9. Wally follows a goofy fad because his friends are. 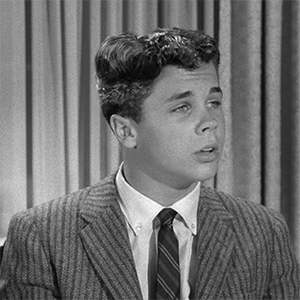 On Leave It to Beaver, Wally starts combing his hair in a new way after Eddie starts a fad by adopting the same look. The Cleavers think his hair looks silly, but Wally stands by his new hairdo. While June tries her best to get Wally to change his hair back to normal, Ward takes the more roundabout path of reminding his son that not every fad is worth following. But really, who is any one of us to judge poor Wally? We all probably could've used that advice in the 1980s. 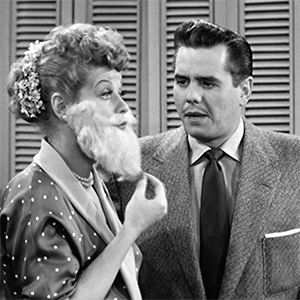 In "The Mustache" episode of I Love Lucy, Lucy really does not like Ricky's new mustache that he grows to try and get a part in a new movie. So to convince him to shave it, she borrows an old beard and mustache from Fred, which promptly gets seemingly permanently stuck to her face. No offense to today's reality shows, but it's still the craziest makeover we ever saw on TV.

KevinHartford 3 months ago
How about when Olivia Walton allowed Cora Beth to give her a disastrous perm?
Like Reply Delete

DedraKayeDeHart 3 months ago
not sit-coms, but they didn't include Jim Bob Walton's pink hair after his sister Mary Ellen wanted to test out the solution to bleach hair on "The Waltons" or Charles Ingalls green hair after a bucket of paint was dumped on his head while Laura and Carl are trying to catch the Creeper of Walnut Grove.

MarlaMcLaughlin 10 months ago
Greg’s hair was back to normal by the end of the episode, not the next. It was the series finale. And Bobby was selling the tonic, not Peter.
Like (3) Reply Delete

AnnaRentzVandenhazel MarlaMcLaughlin 3 months ago
I was gonna say that. The "next episode" after that one originally aired was a rerun.
Like Reply Delete

#9 Wally had a normal (greasers Jelly Roll hair cut) hairdo......it was not that something went wrong......like on BOY MEETS WORLD where Cory tried to make his hair straight.
Like (1) Reply Delete

JeffLove 29 months ago
Kimberly on Different Strokes had her hair turn green.
Like Reply Delete

Dario KathyMcKinny 29 months ago
And, it was Bobby who gave Greg a bottle of that unworkable hair tonic, not Peter! The MeTV staff has problems getting fact straight, sometimes.
Like (4) Reply Delete

BarbaraBushTrautmann Dario 3 months ago
Right! And there WAS no "next episode" after that one because it was the last episode of the series!

Lucyneenah19701 42 months ago
It was hilarious when Julie McCoy's haitr was died green! It was also hilarious when Brenda Walsh died her hair green on Beverly Hills, 90210. That wasn't mentioned in this article.
Like (1) Reply Delete

AnnaRentzVandenhazel Lucyneenah19701 3 months ago
I guess 90210 isn't "classic" enough since it was mostly in the 90s.
Like Reply Delete