Who remembers camping in an Airstream? 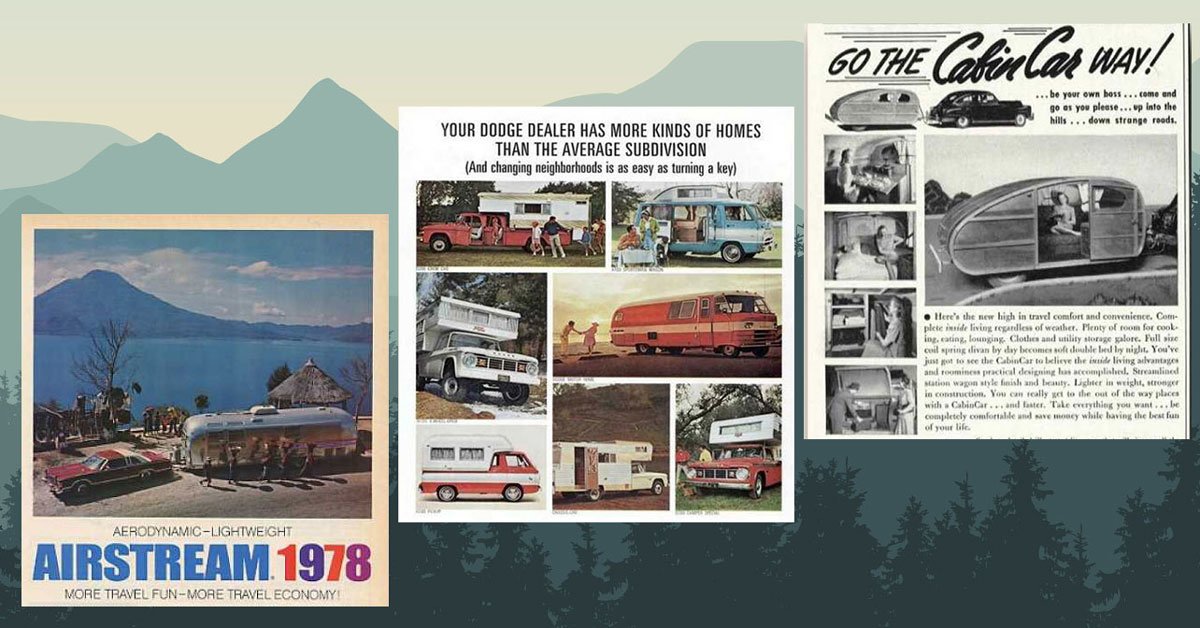 Ah, the joys of camping. The fresh air, the quiet, the bugs. Okay, so it’s not all sing-alongs and mountain scenery, but there are some great times to be had while camping with the family.

Here are nine vintage advertisements from the 1940s through the 1970s extolling the virtues of escaping normal life for a while. 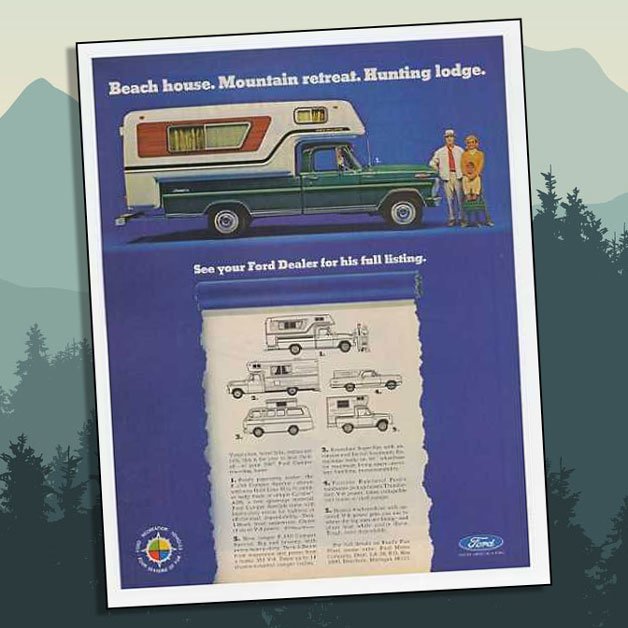 Starting off with a classic, pickup truck campers were extremely popular in the 1960s. This ad from 1967 is a beautiful illustration of a camper resting on the back of a classic Ford truck. It also shows the many variations offered including a smaller pickup truck version and a van. 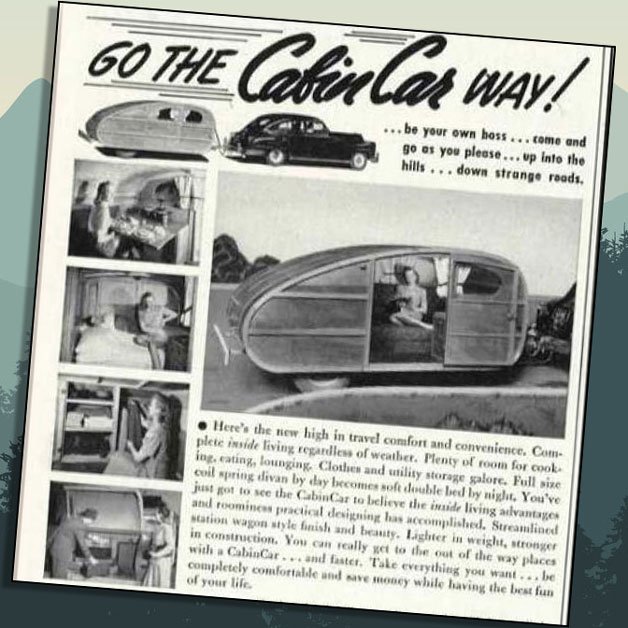 Rewinding two decades to the beginning of the camping craze, this 1947 CabinCar trailer doesn’t just have wood siding, it’s actually made of wood! It has a small couch that turns into a bed and “clothes and utility storage galore.” It’s even got a small table for cozy dinners on the go. 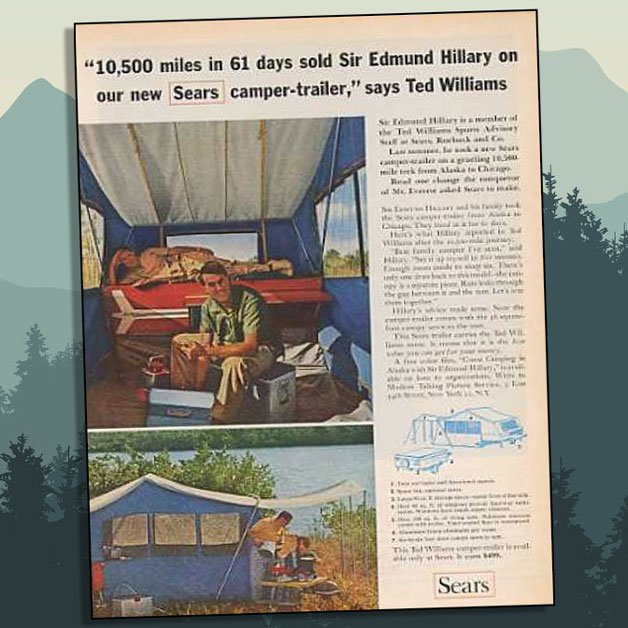 This ad brags that Sir Edmund Hillary endorsed this camper trailer, ten years after he and his team became the first confirmed climbers to summit Mount Everest. Pop-ups aren’t the most lavish of outdoor dwellings but isn’t that kind of the point? 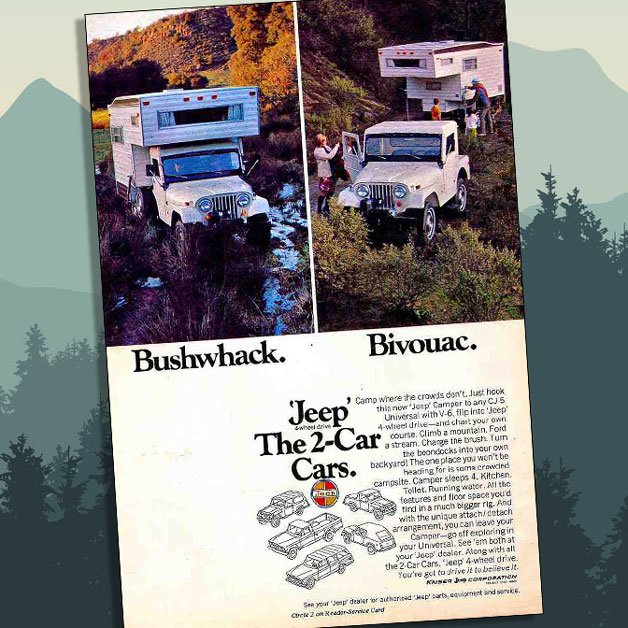 Possibly the weirdest entry on this list is the Jeep CJ-5 car and trailer combination. At first glance it seems like a normal pickup truck style camper. But there’s a little more to it. It’s a modified two-seater Jeep with a small bed in the back for the trailer to rest on. The trailer is specially made and has its own wheels and brakes. What do you do with a two-seater Jeep with a tiny pickup bed the rest of the year when you’re not camping? Who knows? It looks great in this ad! 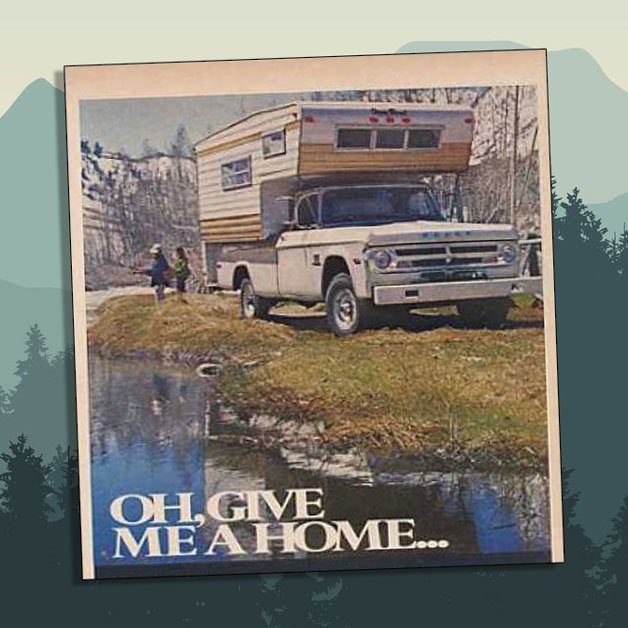 Of course, there were normal pickup camper choices in 1969 as well. Here’s an ad for Dodge showing how versatile this type of camper can be. Pull up right to your favorite fishing hole! 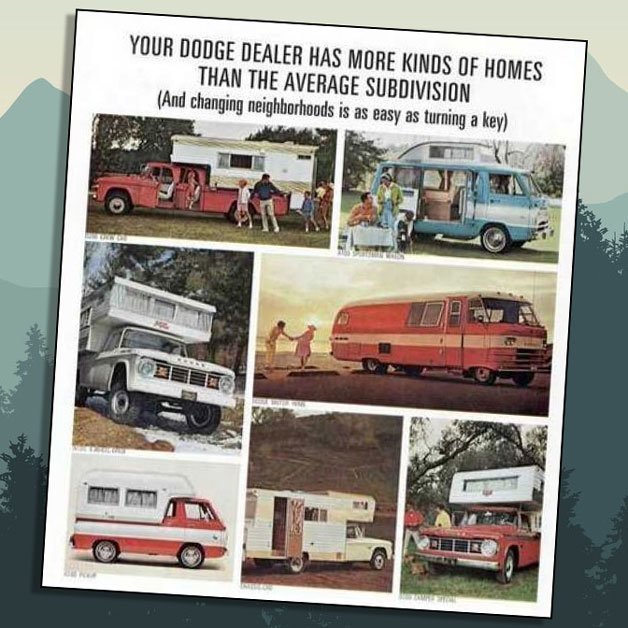 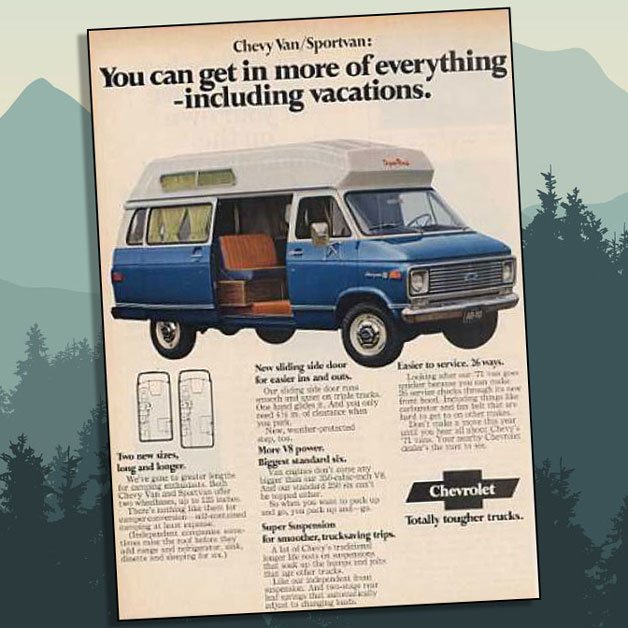 By the 1970s, vans were all the rage. This blue Chevy van is a classic with an elevated roof and tiny curtains for the windows. Vans were even more mobile than pickup truck campers and could be parked almost anywhere. 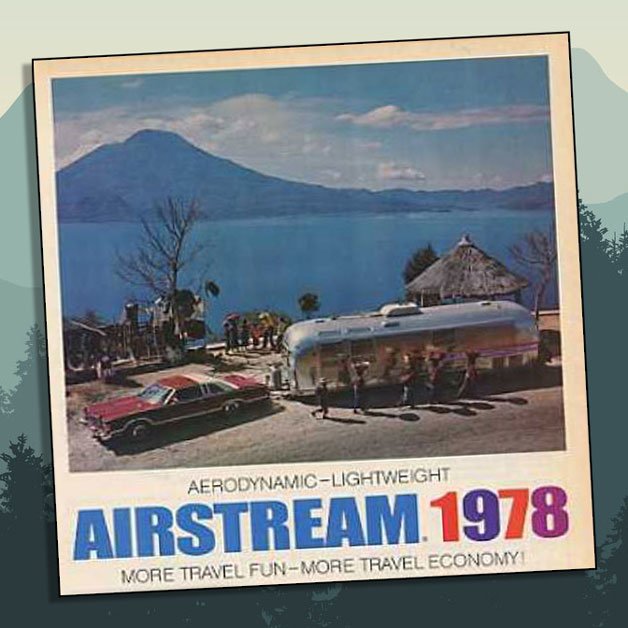 While mobility is nice, there’s nothing like the comfort and style of a full-length Airstream trailer. Just because you’re leaving home doesn’t mean you should go without a full kitchen. Airstreams were very aerodynamic and light for their size, so you could hop in your boat-sized sedan and drive wherever your heart desired. 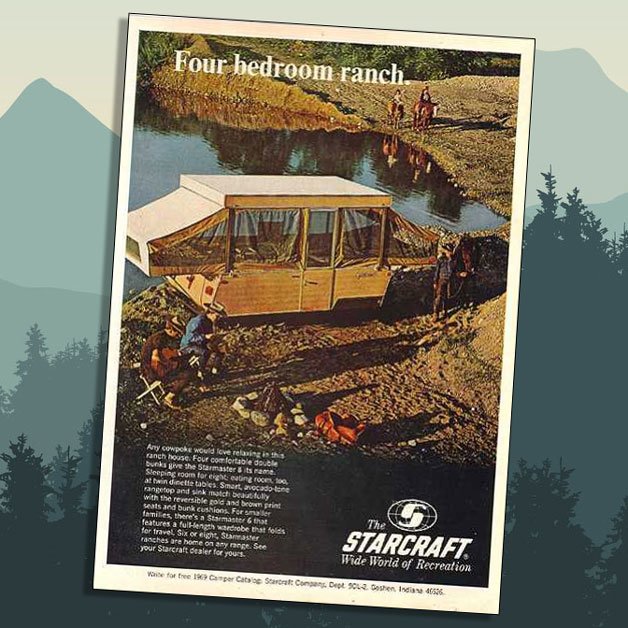 Finally, this Starcraft ad from 1969 shows the benefits of a home away from home. With all its convertible and foldout components, this trailer was touted as a “four bedroom ranch.” That may be up for debate, but one thing is for sure – there’s nothing like sharing a good campfire and a marshmallow or two. 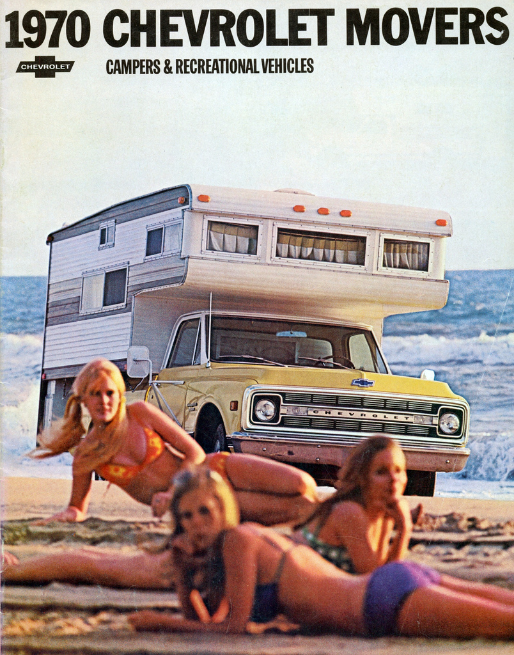 OriginalGreaser RobCertSDSCascap 12 months ago
Really nice and the truck ain’t bad either.
Like (1) Reply Delete 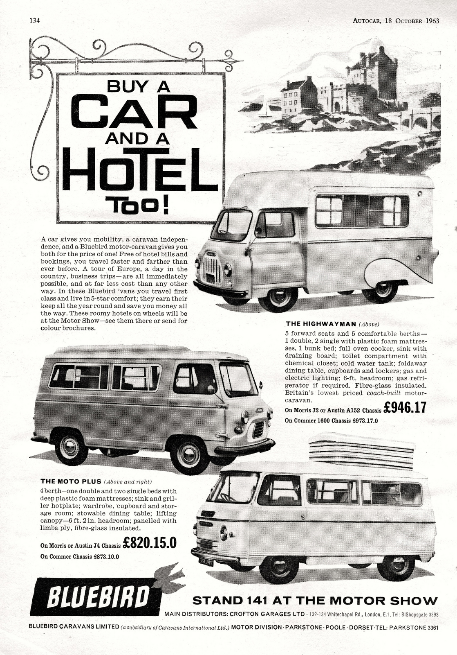 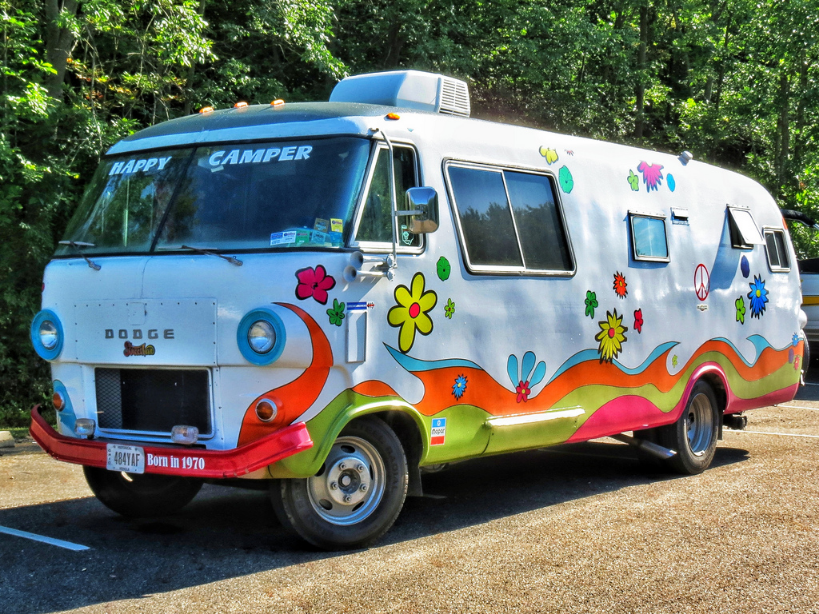 DAX RobCertSDSCascap 7 months ago
That's adorable! It's it yours?
Like Reply Delete

Utzaake 12 months ago
8. That Airstream looked so much like the vehicles used by television network and station news departments for remotes during the 1950s & early-1960s.
Like (1) Reply Delete

idkwut2use 12 months ago
Oh, how I love RVs. ;; I have a bunch of books of images like those. My family had so many adventures in our trailer--not an Airstream or anything, a more modern Citation one. But still. 8'D
Like (2) Reply Delete

RobCertSDSCascap 12 months ago
Number 8 reminds me...
"They travel in a silver eagle
with eight rooms and a shower.
And every Sunday afternoon
you can tune 'em in
on the Dooright hour!"
Like Reply Delete

RobCertSDSCascap 12 months ago
Good stuff! Have fun in this 1968 Corvair Ultra Van; 370 made. 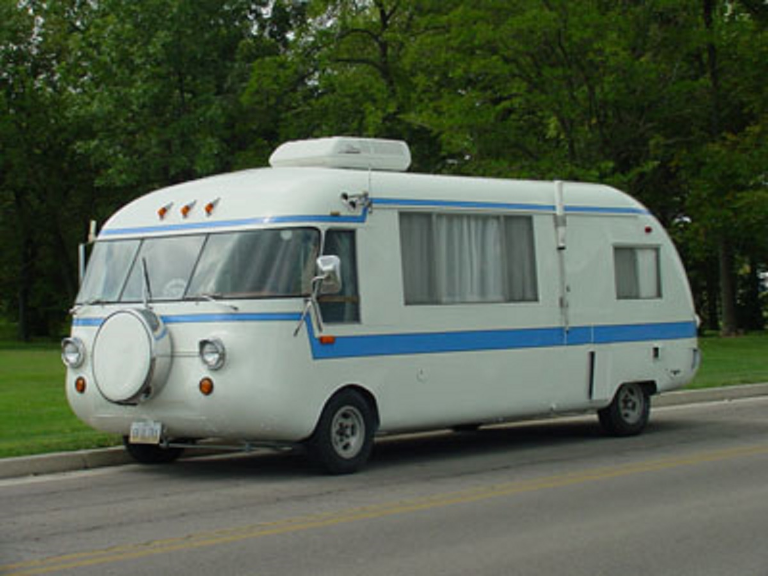 JERRY6 RobCertSDSCascap 12 months ago
now that is something I can see owning . that is nice
Like (1) Reply Delete