Where To Watch Shop Store Contact
Home / Stories / The Unlikely Dozen: 12 stars you forgot were cast as cowboys in TV and movies
did you know?

The Unlikely Dozen: 12 stars you forgot were cast as cowboys in TV and movies

From Bob Dylan to Bob Denver, see who managed to buck their stereotype. 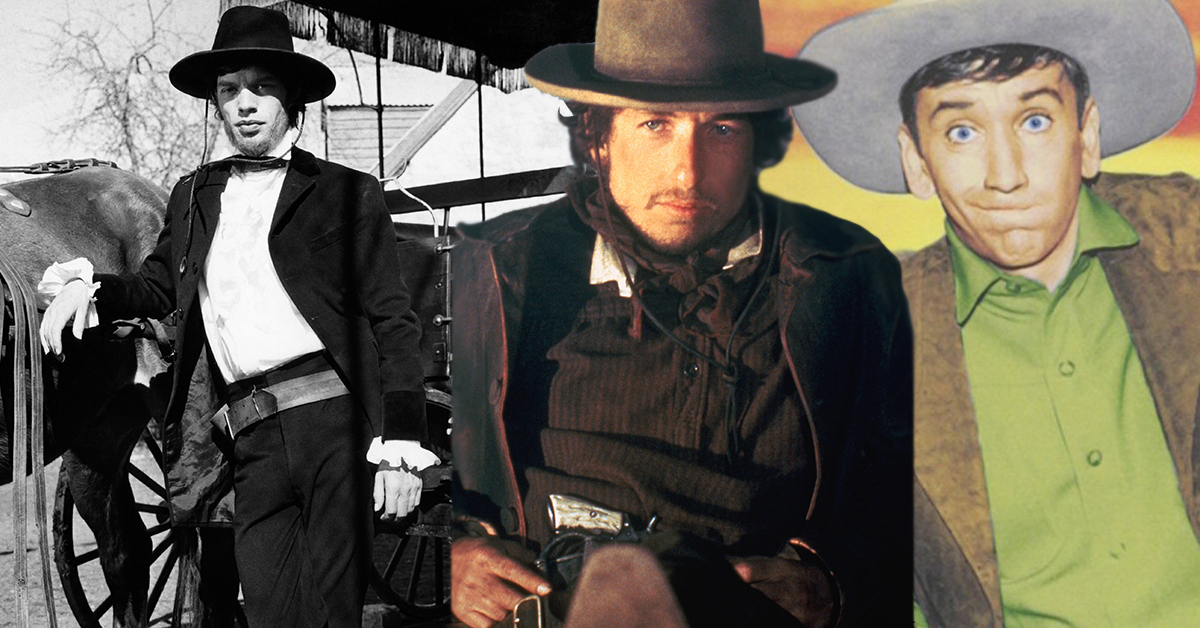 In the world of TV and movie Westerns, there are a whole lot of familiar faces. Of course, you've got your stars like John Wayne, Clint Eastwood, Chuck Connors and James Arness. And all those character actors like Harry Dean Stanton, Jack Elam and Slim Pickens. But among these colorful casts, every now and again, an unlikely cowboy slips into the mix, briefly appearing in Westerns before riding on to greener pastures of broader genres. 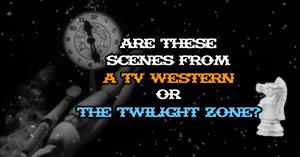 Are these scenes from TV Westerns or 'The Twilight Zone'?

Recently, it was announced that Arnold Schwarzenegger will be starring in a new Western series for Amazon's steaming service. It's called Outrider, and it finds The Terminator star in Oklahoma in the 1800s. We're not sure how they'll explain away Arnold's accent, but history has shown that this is the kind of eyebrow-raising casting that can be hit or miss with Western fans.

With this upcoming role, Schwarzenegger joins a group of actors who we never expected to see in the Wild West. Here, we've assembled what we lovingly refer to as The Unlikely Dozen, a gang of major stars who most folks likely don't remember donning cowboy hats and slinging guns on TV or the big screen. From rock stars to sitcom leads, here's just about the most impressive crew of fleeting Western characters we ever saw. 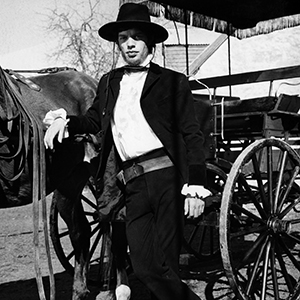 The story of the outlaw Ned Kelly has been told over and over, but the Rolling Stones frontman notably starred in the folk figure's first movie shot in full color. It was also Jagger's first movie, released in 1970 as a British-Australian film and directed by Academy Award winner Tony Richardson (Tom Jones). But neither Jagger nor Richardson had enough star power to keep the film from flopping. Both opted not to even attend its premiere in London. 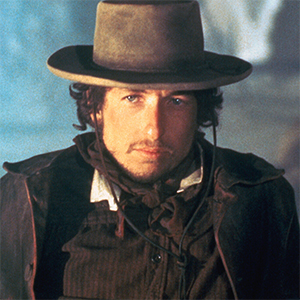 Bob Dylan also played a cowboy in his first big screen feature: 1973's Pat Garrett & Billy the Kid. In it, Dylan plays Alias, a stranger who helps Billy the Kid (Kris Kristofferson) escape from three thugs, killing one with a knife. We got a tough guy here! Dylan also composed the film score, including his hit "Knockin' on Heaven's Door." Unlike Jagger's bad luck, Dylan's movie was critically acclaimed. The folk singer also got a Grammy nom for his film score. 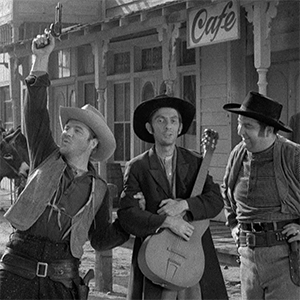 Big-time TV producer Aaron Spelling has nearly 30 roles to his credit on IMDb, including this appearance as a cowboy in a 1956 episode of Gunsmoke. In "The Guitar," Spelling plays Weed Pindle, a popular guitar player in Dodge City who it turns out fought on the wrong side of the Civil War. 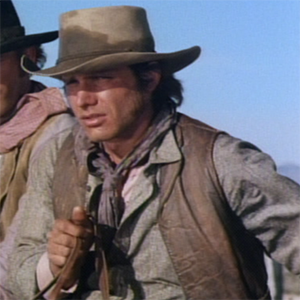 As Star Wars' Han Solo, Harrison Ford has basically played one of the most famous space cowboys in movie history. But he also stepped into some cowboy boots right here on planet Earth. Ford turned up in two episodes of Gunsmoke in the early '70s, as well as on The Virginian in the mid-'60s. Here he is in 1973, directing his roguish glare at Matt Dillon. 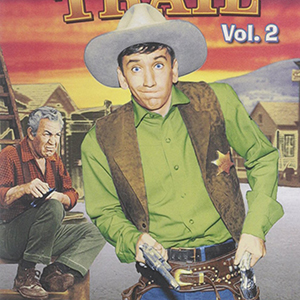 Here's another flashback from 1973 that we just love. Remember Bob Denver's short-lived Western comedy series Dusty's Trail? It was basically like a mash-up of Gilligan's Island and Wagon Train, created by Sherwood and Elroy Schwartz. The theme song tells you all you need to know about Denver's hapless cowboy character: "Dusty's the reason for their plight, thanks to Dusty – nothing's right." 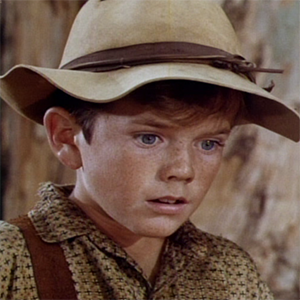 Unlike Clint and Ron Howard, child actors who memorably appeared in Western garb, you may not have recognized Butch Patrick in his early roles as a young cowboy on shows like Bonanza, Rawhide and Gunsmoke. The Munsters son can be hard to spot without his makeup! 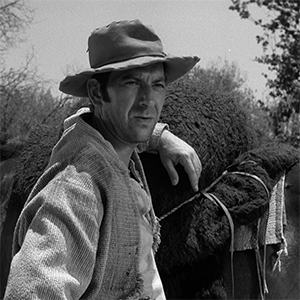 Gunsmoke pulled in heaps of talent in its 20 season run, and that even includes The Odd Couple's Jack Klugman in one of his odder roles in 1958. Here we see the Emmy-winning actor as Earl Ticks in the episode "Buffalo Man," the rascally partner of the titular buffalo hunter. 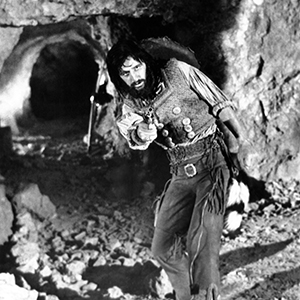 The Beatles' Ringo Starr began acting in the 1970s, and the third role he landed was in the Italian spaghetti Western movie Blindman, where he plays the brother of a shady bandit. Many credit Ringo's role as Candy for the movie achieving cult fandom status today. 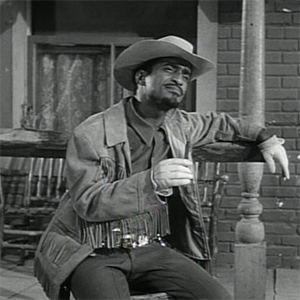 Is there anything Sammy Davis Jr. couldn't do? The multitalented star's long list of credits includes several appearances in both movie and TV Westerns, including this scene here from The Rifleman in 1962 (nearly 30 years into his career!). It's said that it was his special knack for gunspinning that got him cast as a cowboy every so often. 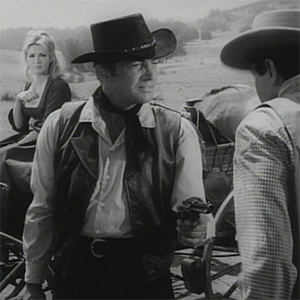 Like Sammy Davis Jr., Dean Martin was also gifted in many ways, gaining fame as a singer, actor and comedian. He and Davis Jr. were in a lot of the same movies, thanks to their connection through Frank Sinatra's Rat Pack, including Western comedies like Sergeants 3 and 4 for Texas. But in Martin's career, he rarely took a TV role, with one of the few exceptions this scene from Rawhide in 1964. Martin plays Gurd Canliss in the episode "Canliss," accepting the juicy part of a very famous hired gun. 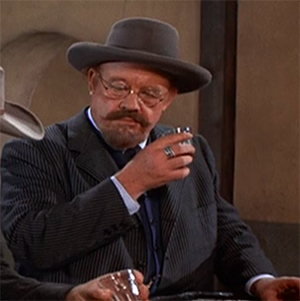 Burl Ives is a fixture of the holidays each December thanks to his '60s Christmas specials, but fans of his early work know he got his start elevating a different sort of tradition. In 1940 with his radio show The Wayfaring Stranger, Ives shared traditional folk songs with listeners, and in the 1950s, he won an Oscar for his role in The Big Country. The photo you see here, though, comes from Ives' recurring role on the short-lived 1970s Western series Alias Smith and Jones. Ives plays Big Mac McCreedy, an avid art collector who also happens to be a con-man. We don't think Frosty would approve. 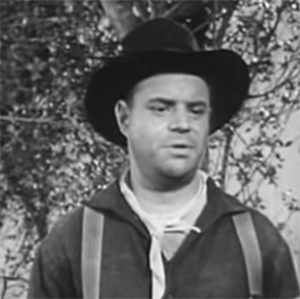 It's hard to think of Don Rickles without immediately thinking of the goofy smile that practically consumes his face, but it may surprise you to know that the comedian and actor took on a much more a serious dramatic role on Wagon Train. In the episode "Wagon Train to Fort Anderson," Rickles plays the gold-digging Joe Carder, willing to betray his brother to better his stance in life. That's certainly a funny way to treat family! 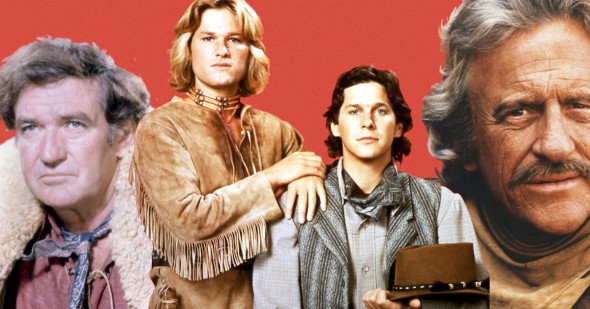 Nostalgia
7 criminally underrated TV Westerns of the 1970s
Are you sure you want to delete this comment?
Close

Tresix 28 months ago
I remember seeing Davis do his gun-twirling on an episode of “The Carol Burnett Show”. To say I was impressed is a HUGE understatement!
Like Reply Delete