11 reasons you need to see seasons six, seven and eight of this classic sitcom 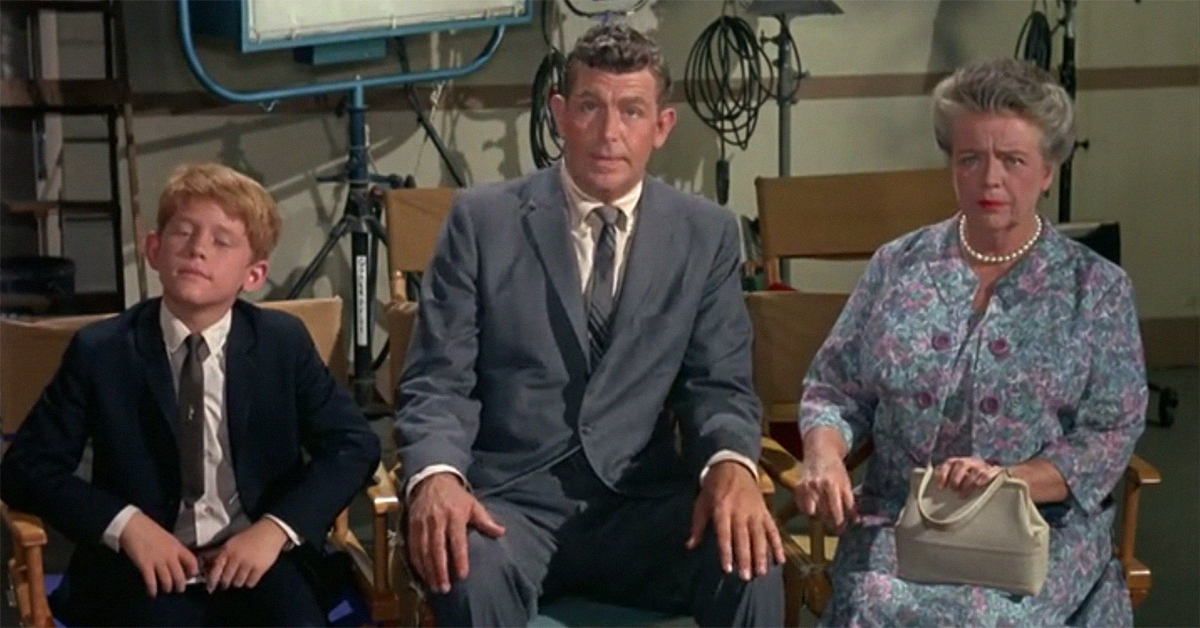 Pity poor Jack Burns. He had some sizable shoes to fill. In 1965, the comedian, the partner of George Carlin in the Burns & Carlin comedy team, was tasked with replacing Don Knotts on The Andy Griffith Show. The multiple-Emmy-winning actor stepped away from the hit series after season five to pursue a film career. Barney Fife was no longer regular character. Instead, audiences were left with Burns as the new deputy, Warren Ferguson.

That was not the only significant change for The Andy Griffith Show in season six. The show went full color for the first time, splashing Mayberry across the screen with a bright palette.

The three color seasons tend to be somewhat divisive with fans. Warren Furguson shoulders much of the blame, but the character only appears in 11 episodes before mysteriously vanishing to wherever Chuck Cunningham went.

In some ways, seasons six, seven and eight feel like a sequel series. The charm was still there, and new faces allowed writers to explore new facets of beloved characters Andy, Opie and Aunt Bee.

Here are 11 reasons for you to fall in love with these later stories. 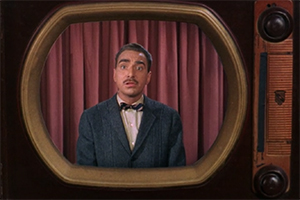 The color seasons explore more of Mayberry and its other citizens. Most notably, we see a lot of Howard Sprague. He's a lovable sap and he only appears in the color episodes. The mama's boy of Mayberry essentially set the template for modern characters like Seymour Skinner on The Simpsons. The goof attempts stand up comedy in a memorable storyline. 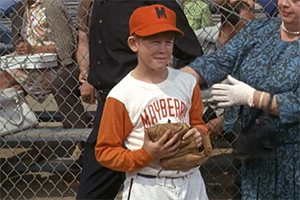 "The Ball Game" was based on a real-life experience of Ron Howard and his father. The story centers on Andy Taylor serving as an umpire for Opie's championship baseball game. Andy has reservations about serving as an umpire and showing favoritism, so he decides to play fair. However, the town turns against its own sheriff when he calls out his son at home plate, forcing the Mayberry Giants to lose. "That had happened to me and my dad," Howard told Larry King in 2013. "He called me out at home on a ball game that was on my birthday. I couldn't believe he called me out!" 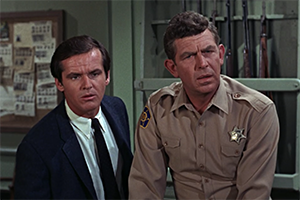 The legendary actor turns up in two episodes, as two different men. He first plays the father in "Opie Finds a Baby" and a year later takes the stand in court in "Aunt Bee, The Juror." Alas, he does not yell, "You can't handle the truth!" 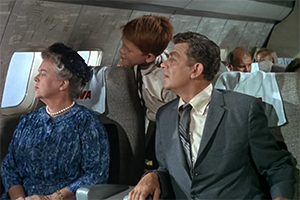 We see more of Mayberry in the color seasons and we travel outside of Mayberry more often. It's fun to watch the characters in unfamiliar, "big city" settings. The Taylors head to Hollywood, and the action shifts to Raleigh from time to time.

5. We get to see Barney's life outside of Mayberry. 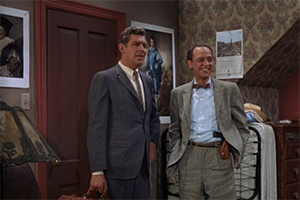 Don't worry, Barney appears frequently in the later seasons. In "A Visit to Barney Fife" we get to see his humble apartment in Raleigh, with a view of city hall between two telephone poles. Andy's former partner displays his hometown pride with a Mayberry High pennant hanging above his bed, and he has become a bit of an art lover, what with the prints of famous paintings like "The Laughing Cavalier" and "The Blue Boy" pinned by the door. He's on a "culture kick," he tells Andy.

6. We get to see Gavin MacLeod as Andy Taylor. 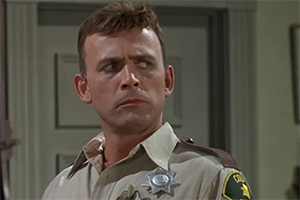 Ever wonder what someone else would be like as Andy Taylor? Well, the Sheriff himself is curious, which is why he heads to Hollywood to witness a production about his life. A wig-wearing Gavin MacLeod, the captain of The Love Boat himself, is playing the movie version of Sheriff Taylor. 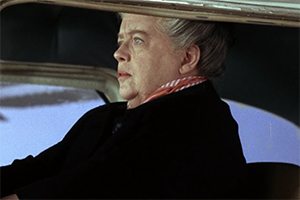 With Opie a little older, Aunt Bee's child-rearing duties subside a bit, giving the housekeeper far more "me time." She helps bring Chinese cuisine to Mayberry in "Aunt Bee's Restaurant," takes flying lessons in "Aunt Bee's Big Moment," gets a cooking show in "The Mayberry Chef" and goes on some hot dates.

8. The highest rated episode in the series came in season eight. 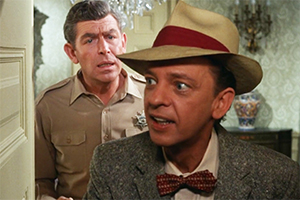 Don Knotts' final appearance on TAGS came in season eight with "Barney Hosts a Summit Meeting." The episode involves the former deputy arranging a meeting of U.S. and U.S.S.R. officials in the Taylor house, and was based on the actual 1967 summit conference of American and Russian statemen in Glassboro, New Jersey. The episode drew more viewers than any other for the series, and ranked amongst the highest-rated sitcom episodes of all time. It's worth noting that Don Knotts won two of his Emmys for work in the color seasons.

9. Helen is more developed as a love interest. 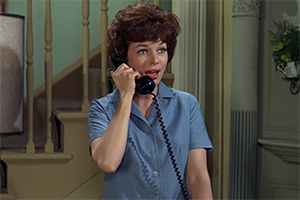 The black and white seasons focus on Andy Taylor as a father, and do a wonderful job of depicting that relationship. In the color years, we get to see more of Andy as a lover and fiancé. Sure, Andy previously dated Ellie Walker and Peg McMillan, but those two hardly had the screen time and character development of Helen, who is a major figure in her own right. Overall, the women of Mayberry are more developed in the color seasons.

10. The older Opie is a richer character. 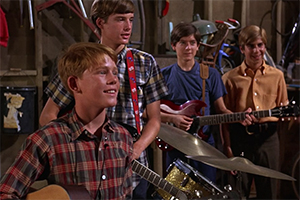 It's a pleasure to see Opie take all those lessons from the early years and turn into a young man. We see that parenting pay off. Remember how Andy teaches Opie how to deal with a bully at the start of season two? Well, in the final season's "Opie and Mike," it is now the young Taylor passing along that advice. We also see Opie take his first job, join a rock band, and develop crushes. Older characters are typically a little more well rounded.

11. Mayberry is simply beautiful in color. 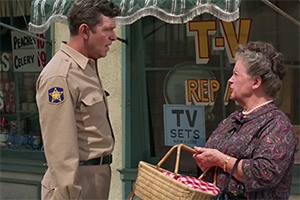 Yeah, this is pretty obvious — Mayberry in 1960s color is pretty. It's a spectacle to behold the town and environs in the full spectrum.

QUIZ: HOW WELL DO YOU REMEMBER MAYBERRY IN COLOR? 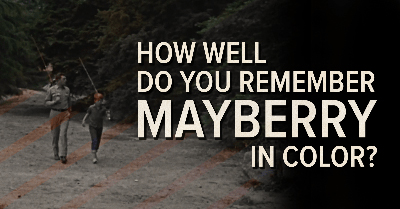 Now put your memory to the test. TAKE THE QUIZ

W75 1 month ago
Not to be the contrarian here but I personally prefer the colored episodes. They seem more natural and less hayseed than the B&W. The early ones just seem like a continuation of “No Time for Seargants” to me.
Like Reply Delete

JamesRo81380793 3 months ago
I liked dinner at eight . oregano
Like Reply Delete

barefeethusky 5 months ago
Are the color seasons as a collection great? No. However, there are some great episodes and moments throughout the color seasons. #7 on this list (Aunt Bee gets to do more) is the #1 best part of the color seasons for me. Aunt Bee episodes are certainly my favorite throughout the entire series. The #1 on this list is the one I probably disagree with most. Howard was way overused once he was introduced. He would have made a fine "townsperson" character but he was a featured character in way too many episodes. The biggest issue I have with the color episodes is how absolutely out of character Andy is quite often. He would never, ever talk so disrespectfully to Aunt Bee as he does in Aunt Bee's Crowning Glory and other episodes. Andy becomes a disgruntled grump in so many episodes. Someone obviously tampered with his Post Toasties or Sanka during those years.
Like Reply Delete

BrandonJohns 6 months ago
The show wasn’t funny anymore without Barney, the color took away the timeless feel of Mayberry, and Andy seemed like a whole different person. Andy seemed always irritable, like he just had enough of life and everything. The Andy Taylor from the first season and the Andy Taylor of the final season seemed like two completely different characters.
Like (1) Reply Delete

Tony 10 months ago
We never got to see an episode where Howard Sprague "came out," though. Too scintillating for then, I guess.
Like (1) Reply Delete

Ilovelalaw 11 months ago
To George,
His name was David Hedison and I agree with you. He will be missed. I still cannot get over the idea that he is gone. He gave me some of my best TV memories growing up and I have had a king sized crush on that man since I was 10-12 years old.
Like (1) Reply Delete

RickBox 11 months ago
Mayberry is not beautiful in color. Everything is the color of green Pepto-Bismol would be if Pepto-Bismol was green. I speculate that color of green works well as an off-white in black and white, and the cast and crew were so used to that color from working there for five years already that they didn't know how off-putting it would be for us who were just seeing the town in color for the first time.
Like Reply Delete

MrsPhilHarris RickBox 11 months ago
I agree. I hate that green. I've seen it on a few other shows from that era.
Like Reply Delete

David 11 months ago
Color episodes may be kitsch, but Andy is very irritable in those episodes and the plot lines are cheesy.
They are very much lacking the laugh out loud quality of the B and W's.
Like (2) Reply Delete

ELEANOR 13 months ago
During the episode when they "went" to Hollywood, you can see Ronnie Howard developing as a future director. In one scene, when they show the family watching the show being "filmed" Ronny Howard climbs up to peer through the camera. And the way he does it, apparently he's done that plenty of times.
Like (1) Reply Delete

Jack 13 months ago
I dont even think they show the color seasons on tv, from what I seen they only go up to season 5 an then start over again.
Like (1) Reply Delete 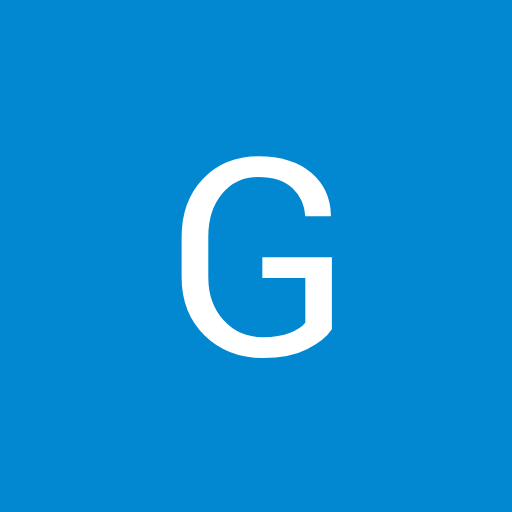 George 19 months ago
Would like to see them again, the B&W's funny stuck in an rut, after through with banjo playing deputy, start showing color ones starting with Opie's drug store job. thanks for putting the Flintstones back on haven't seen them in years. Another cartoon request just turned 50 SCOOBY DOO, WHERE ARE YOU? be good replacement for hogans heroes, thanks for putting the highway patrol back on hope you let it stay on the air an little longer, instead of gone after first of the year will continue to watch still use old school tech VHS to record and move to DVD thanks again loved David Edison as captain crane will miss him, all actors from wonderful series gone hope batman returns soon again thanks.
Like Reply Delete

CedarFarm George 13 months ago
The warmth and charm seemed to disappear in the color episodes. Really a different show with the same people. Andy seemed grabby most of the time. Rerunning seasons 1-5 is just fine with me.
Like (2) Reply Delete