Would you prefer Farrah on your belt buckle or your bean bag? 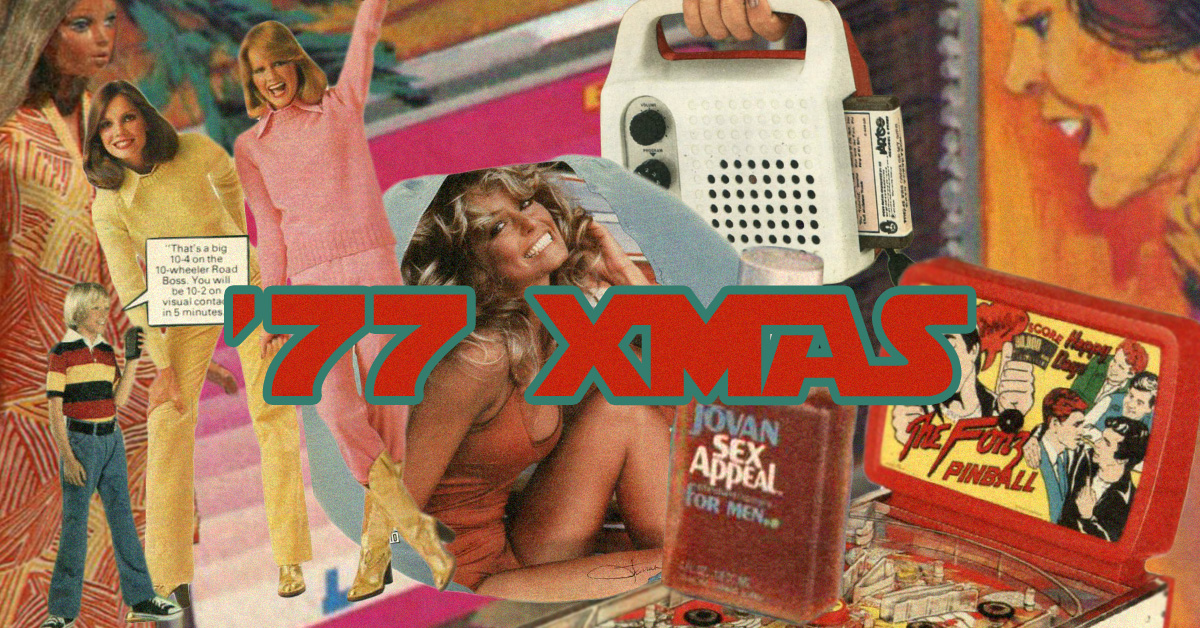 Over the last 40 years, the holidays haven't changed that much. Our families still gather around to watch A Charlie Brown Christmas and The Grinch Who Stole Christmas while chomping cookies baked to grandma's recipes. We listen to Bing and Dean sing carols. And kids dream of unwrapping the newest toys, the hippest fashions and the latest technological gizmos.

Of course, those toys, fashions and gizmos are totally different.

So, what presents were on Christmas and Hanukkah wish lists in 1977? Well, you can get a good idea by flipping through the '77 Sears catalog. Thankfully, the good folks at WishBookWeb.com have preserved these vintage catalogs online. Here are 19 items we would have asked for — and would still enjoy, if anyone is wondering. 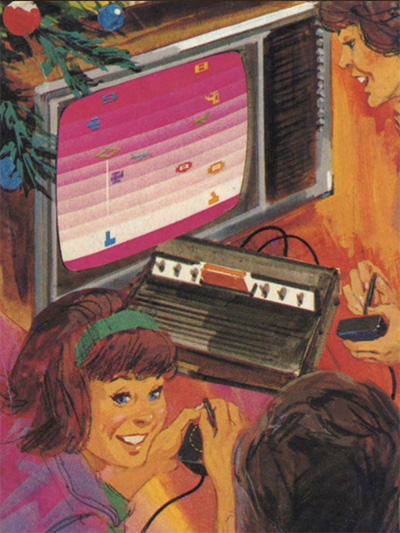 It was right there on the two pages, a miracle in home entertainment. Long before there were fancy, futuristic names like XBOX One X and Nintendo Switch, there was Sears' Tele-Games "VIDEO ARCADE CARTRIDGE SYSTEM," as it was billed. It was a version of the Atari 2600, which had launched in September of '77, made exclusively for Sears. If you had the $178.95 to throw around — about $720 in today's cash — you could have one. That's a lot of quarters. 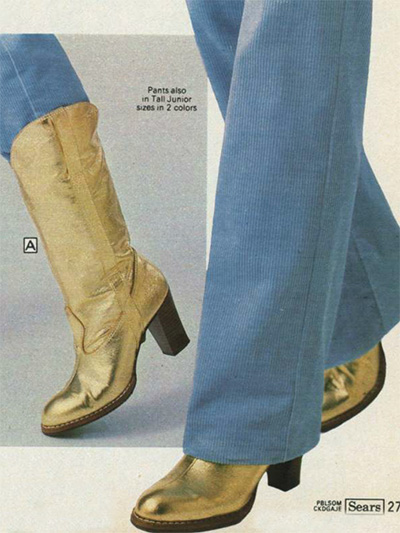 In the disco days of 1977, you had to strut through the mall in some golden platform boots. "Designed to add sparkle to any holiday wardrobe," these dazzlers put a little bling under your bells. 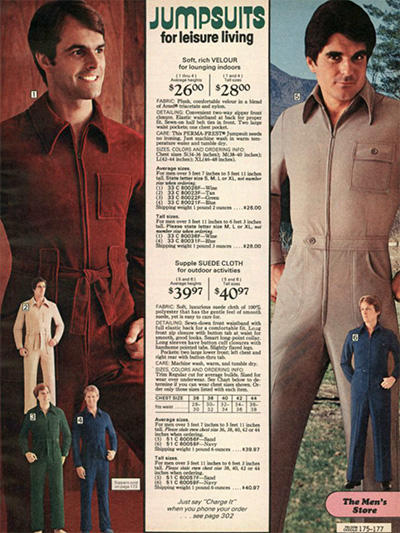 Velour for the indoors, suede for the shade. You couldn't just own one measly leisure suit. There were different textures for different occasions. Relaxing around the house required a supple men's jumpsuit. A rugged fabric was needed for the great outdoors. 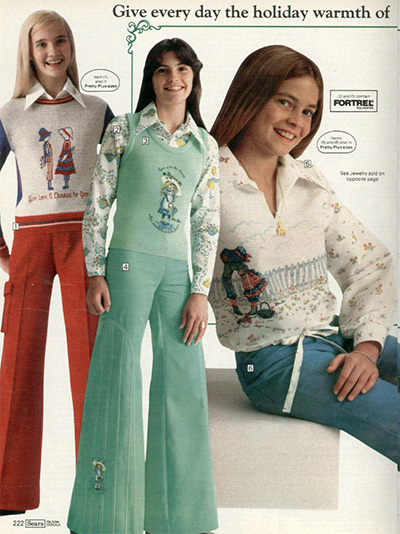 You may not remember the name "Petticoats and Pantaloons," but you likely recognize the imagery. These little cartoon kids in 19th-century clothing popped up on everything from dishware to bellbottoms. With shows like Little House on the Prairie and The Waltons raking in viewers, the frontier life was hip. Albeit in a disco-ready way. 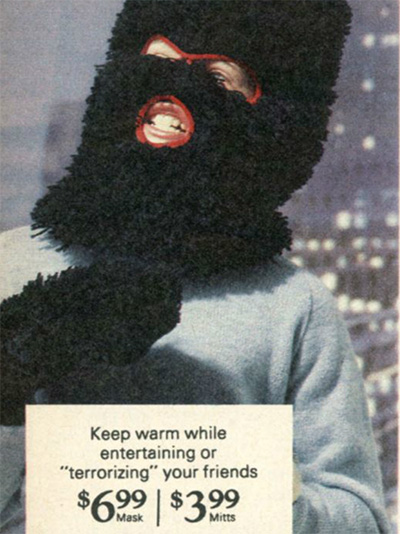 "Keep warm while 'terrorizing' your friends," the catalog declared. 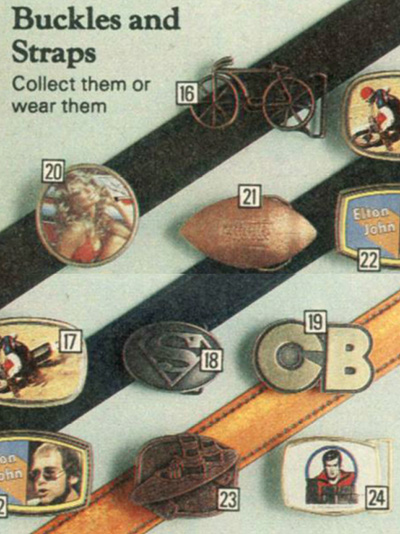 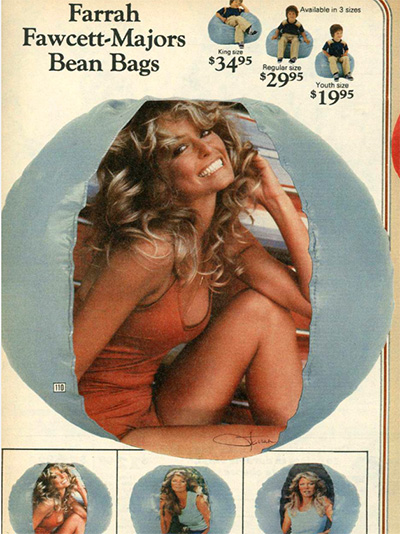 Of course, you didn't just wear Farrah around your waist. You could plop down on her icon swimsuit poster thanks to this officially licensed bean bag chair. Bean bags were all the rage, taking up a full three pages of the catalog. 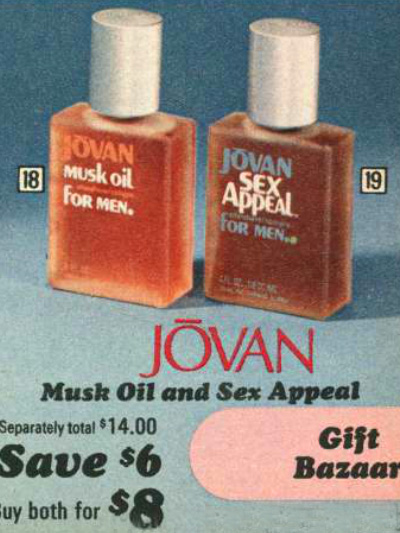 If you had to make a Scratch 'n' Sniff sticker for the year 1977, it would reek of musk. 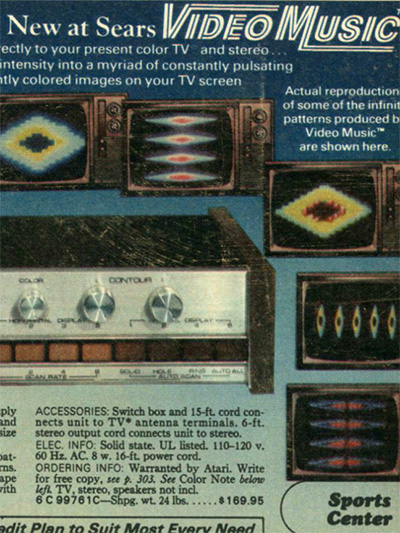 Don't just listen to your music — watch it pulse and vibrate in colorful diamond shapes. That was the idea behind this nifty novelty from Atari, a box hooked up between your stereo and television that would display psychedelic patterns in synch with your music. Check out YouTube for a demonstration. 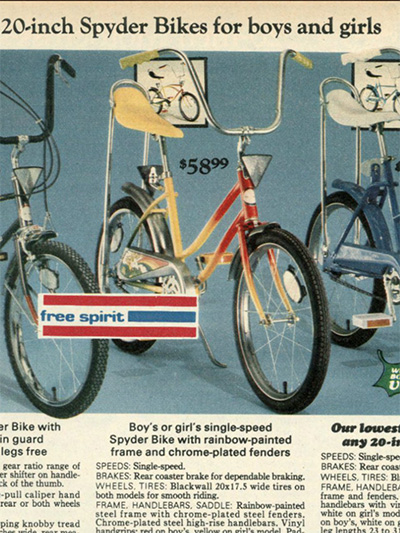 A.K.A. Those Bikes You Always See Kids Riding Through the Woods in Stranger Things. It was so much cooler to pedal around on a banana seat with chopper handlebars. 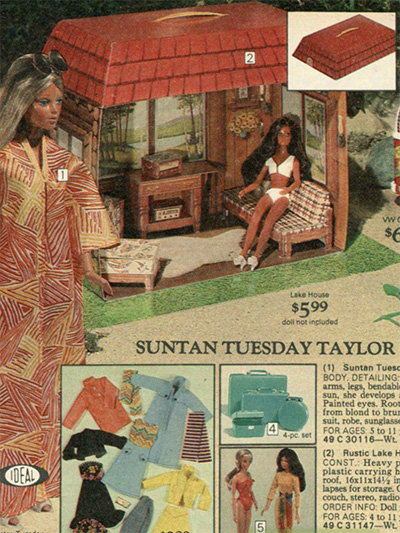 Girls liked their Barbie dolls well done back in the day. Well, technically Ideal's Tuesday Taylor was a rival to Mattel's Barbie, and tried to one-up the popular girl with a deep, deep, George Hamilton–level tan. It's too bad they didn't make her out of leather instead of plastic. 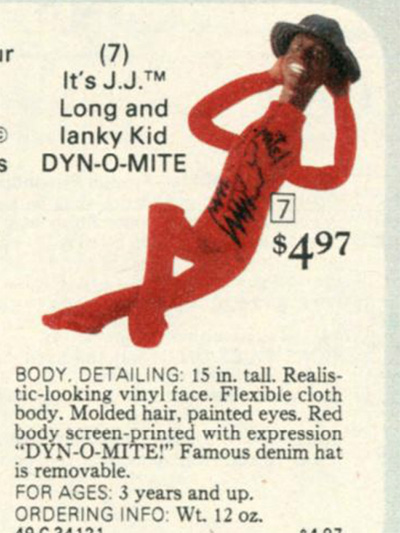 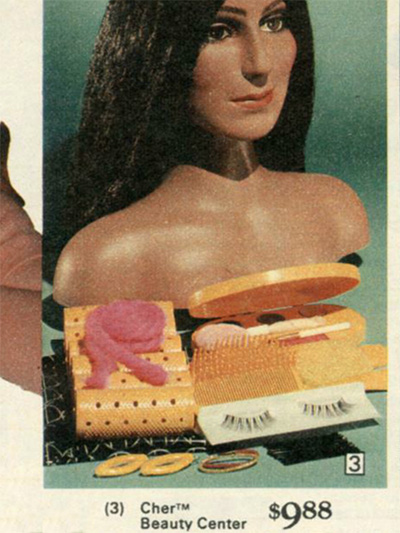 The Cher™ Beauty Center allowed kids to play stylist to the biggest star of variety television. 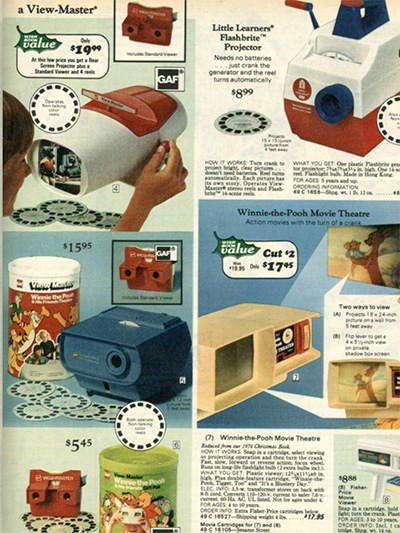 Why settle for just the standard View-Master? You could have projectors, monitors and more to watch your round story wheels. 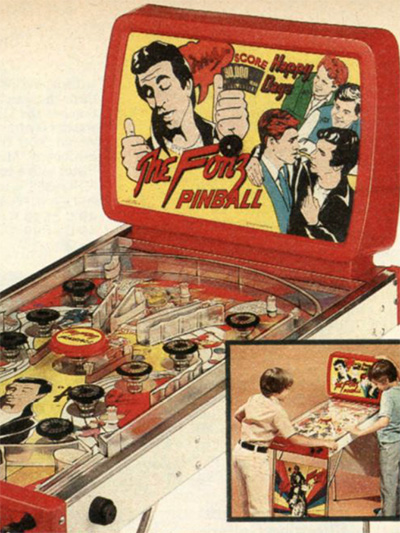 The Fonz gave this game two thumbs up with an "Aaaay!" Why are his eyes closed in all the illustrations, though? 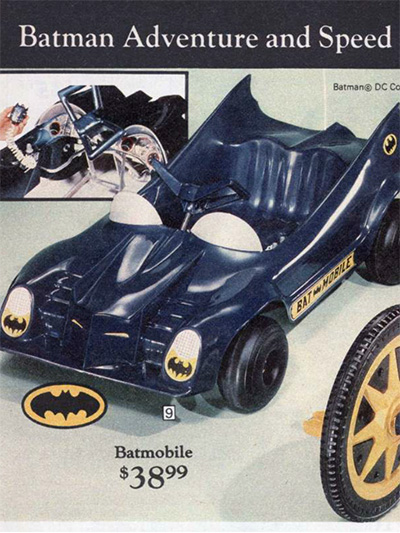 There was no room for Robin on this one-seat wonder. 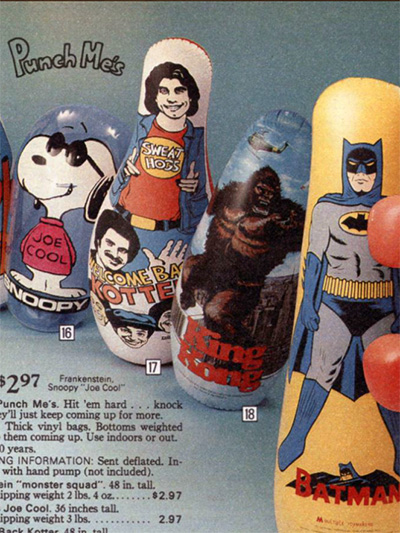 Punch Me's allowed kids (and we're guessing some parents, too) to vent their frustrations on an inflatable pylon. You could throw jabs at King Kong, Batman, John Travolta or… poor, adorable Snoopy? What did he do wrong? 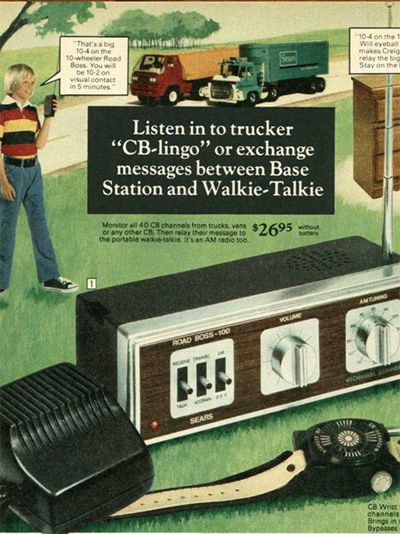 As the belt buckles hinted, the CB radio craze was in full effect in '77. Everyone was talkin' like a trucker. "Monitor all 40 CB channels from trucks," the fine print proclaimed. This was the Twitter of the Carter Era. 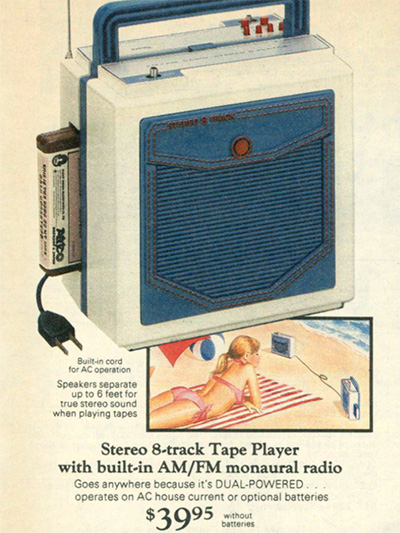 Take your Andy Gibb on the go with this portable 8-track blaster. Plus, it looked like a groovy denim pants pocket. 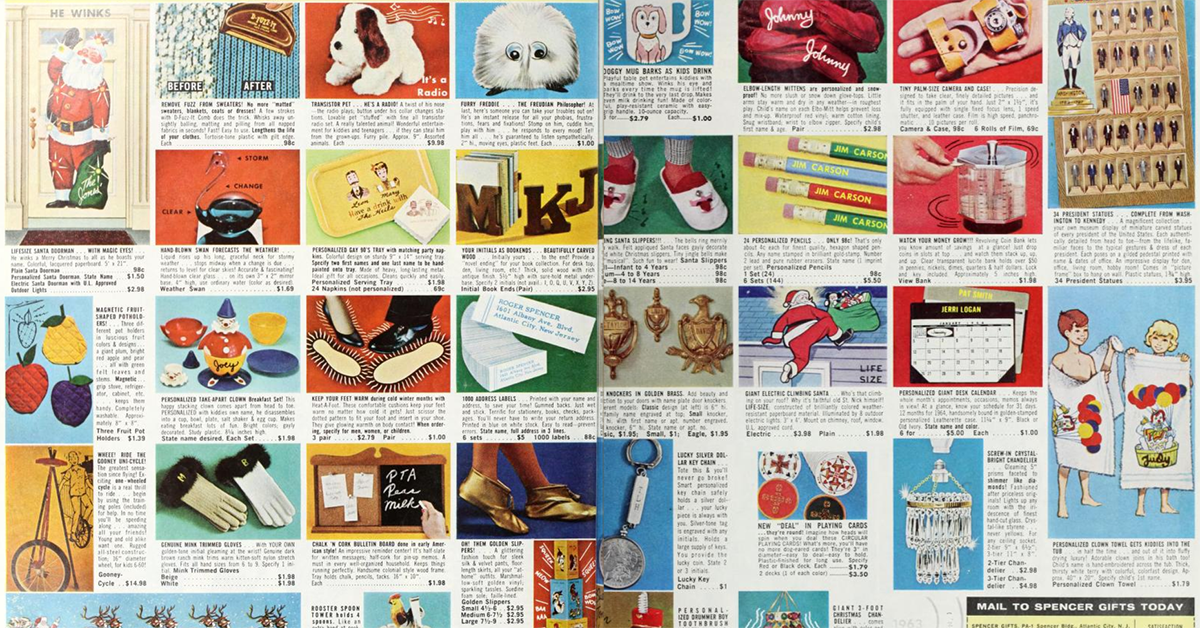 "Take-Apart Clown Breakfast Set": It's the gift that keeps on giving. READ MORE 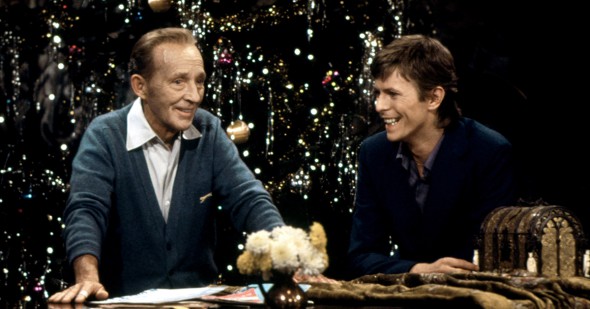 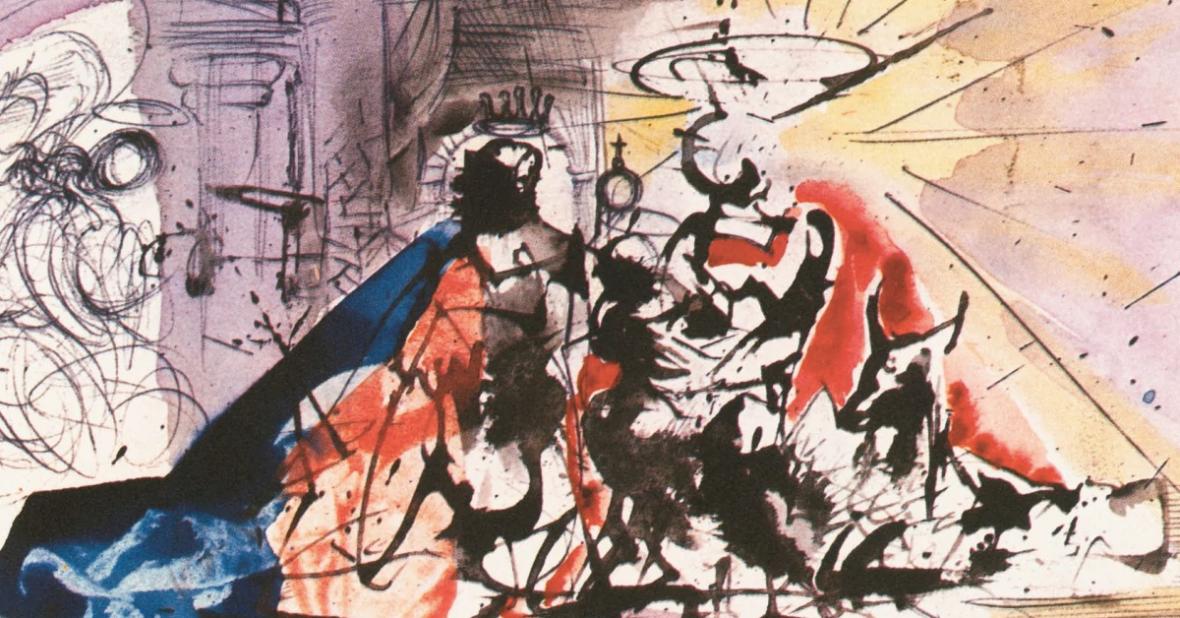 nostalgiachristmas
These Salvador Dali Christmas cards were the shock of the season in 1960
Are you sure you want to delete this comment?
Close

idkwut2use 37 months ago
I'd pick either Fonzie pinball or Tuesday Taylor's house. x-3
Like Reply Delete

Amalthea 37 months ago
I remember, before MTV, our cable system had a channel that played a local pop radio station, and it showed images that was like #9. I loved that channel. I remember that, when I babysat for one family who had cable, once the kids were in bed, I would put their TV to that channel and have it play while I read.
Like Reply Delete