Looking back at the best 'Match Game' panelists

Brett Somers and Charles Nelson Reilly were the perfect pair. 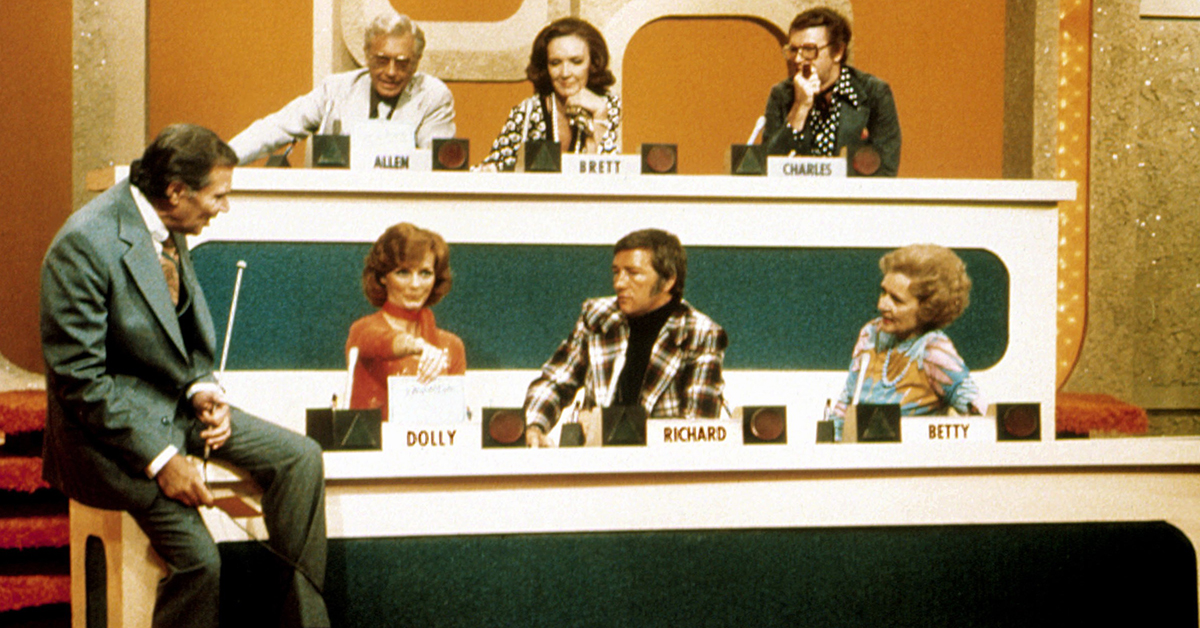 The Match Game has gone through several iterations over the years, but none have been better than the one that aired on CBS in the 1970s.

It was hilarious without trying too hard. It was edgy without being raunchy. The Match Game pushed the game show genre into new territory by offering viewers a hearty dose of laughs and an escape from reality.

Of course, the show's success stemmed from its panelists.

The producers had it down to a science. Each chair had its own special purpose. You couldn't just stick Betty White in the top left chair —she had to deliver the final punch line at the end.

Everyone worked together to put on the best game show of the 1970s, possibly of all time. Here's a look at some of the best panelists. 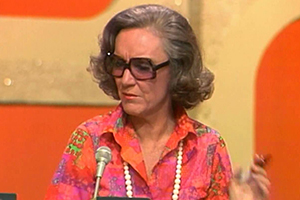 Somers was the queen of Match Game, ruling over the panel in the top center seat. Married to Jack Klugman, Somers was brought on the show at his suggestion. Her raspy voice, outlandish wigs and oversized glasses never left. Her banter with the other panelists was just as great, if not better, than her answers. Of course, Somers wouldn't have been nearly as good if she wasn't placed next to Charles Nelson Reilly.

Where do we begin? Reilly's tongue-in-cheek answers made him a popular fixture on the game show, cracking up audiences by ending each response with a wink at the camera. His banter with Somers was legendary, constantly chastising her for having bad answers or copying his own. In one instance, Reilly demanded to be moved away from Somers. Was it all for show or was it real? We'll never know. 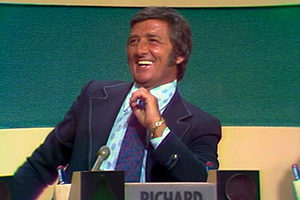 Dawson may be better known today as the host of Family Feud and kissing women on the mouth (!!!), but his legendary appearances on Match Game paved the way for that game show success. The former Hogan's Heroes star was an all-around an excellent player. He always had a witty answer prepared, if not the matching one. After Dawson left the show, perhaps because he was not in control, it was impossible to replace him in the bottom center seat. 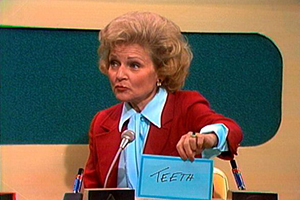 The bottom right seat was always reserved for a funny woman, and who better than to keep the seat warm than Betty White. By the 1970s, White already knew game shows like the back of her hand. After all, she was married to popular host Allen Ludden. White was the perfect panelist, never taking too long to deliver a joke and always having a smile on her face for the punch line. Going last and remaining fresh must have been a challenge, but White did it with ease. 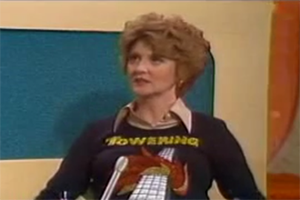 If White wasn't sitting at the bottom right, you would hope it would be Flagg. The character actress wasn't always "right" (okay, she was usually never right), but she was always funny. Flagg's sweater choices and the size of her breasts became running jokes on the show. But Flagg got the last laugh, becoming an Oscar nominee in 1992 for writing the screenplay for Fried Green Tomatoes. 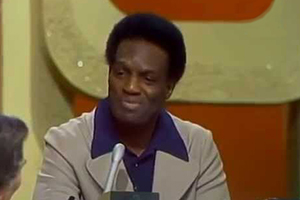 The top left seat was always a difficult one to fill. Being the first to respond, a celebrity could easily break the round by giving a dull response. However, Nipsey Russell was neither dull nor difficult. The Wiz actor was vibrant, hilarious and usually answered with a rhyme. Even though he appeared elsewhere as the Tin Man, he could easily declare his profession "professional game show panelist." 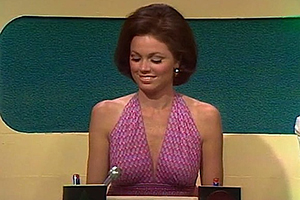 It must have been a challenge for any celebrity to sit in the bottom left position. Being closest to Rayburn, the seat was reserved for an attractive woman to endure his constant and shameless flirting. The fearless Pflug not only endured Rayburn's playful advances, she tossed them back with ease. Pflug also held her own against Somers, White and Flagg — a seemingly impossible task for anyone else.

Patti Deutsch - You either loved her or hated her. Deutsch's answers proved to be divisive among viewers

Joyce Bulifant - Sure, Bulifant has some rotten answers. But after a while, you had to believe it was part of her strategy for making people laugh.

Marcia Wallace - The Bob Newhart Show star shined on this program. It's too bad she wasn't a regular like Somers or Reilly. Probably because she was censored too often.

Orson Bean - Another staple of the top left seat.

JohnPerry 8 months ago
To RubyJuly....you don't need a TV to get BUZZR.....all you need is your smartphone.....and the Pluto app......BUZZR is part of that app.
...and Match Game is on several times a day
Like Reply Delete 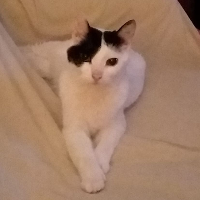 RubyJuly 8 months ago
Is Match Game on MeTV? I'd love to see more of it! Once a day on Game Show Network is NEVER enough and we don't get BuzzrTV here.
Like Reply Delete

ndebrabant RubyJuly 8 months ago
The Match Game is on Buzzr. They show lots of the old game shows. Check your local listings.
Like Reply Delete

steve760 RubyJuly 8 months ago
Buzzr streams live at buzzrtv.com as well. My market has a Buzzr affiliate, but I cut the cord, and right now, I don't subscribe to Google's local TV service, or Hulu's. So I watch on their website.
Like Reply Delete

remodel18 RubyJuly 8 months ago
It is on the Game Show Network Mon-Friday. I watch it all the time. Comes on Noon Central.
Like Reply Delete 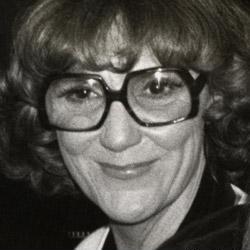 RubyJuly Kayleigh 8 months ago
How lucky you are!
Like Reply Delete

remodel18 Kayleigh 8 months ago
Loved Brett on the show.
Like Reply Delete

benhallums12019 15 months ago
I Hope This Show "The MATCH GamE" and of it's own editions from 1962 to 1999 cross-between network and SYNDICATED PORTIONS of TV GAME SHOW Made by The Late & Expired FRANK WAYNE AND FINANCED BY MARK GOODSON-BILL TODMAN AND SECRETLY DISCOVERED BY MR. PHIL SPECTOR IN 1962 FROM NBC TO CBS TO SYNDICATED TO ABC WITHIN At Twice on ABC-TV USA & 3 TIMES on SYNDICATED from 1975 to 1999. THE HOSTS/STARS ARE MR. GENE RAYBURN, MR. ROSS SHAFER, MR. MICHAEL BURGER & MR. ALEC BALDWIN AND THE ANNOUNCERS ARE MR. JOHNNY OLSON, MR. GENE WOOD, MR. PAUL BOLAND & MR. STEVE FRENCH.
Like Reply Delete

Tony 17 months ago
How could you dislike Pattie Deutsch? She was adorable.
Like (1) Reply Delete

cornerofthemoon2 17 months ago
Gary Burghoff deserves an honorable mention. He often filled in for Charles Nelson Reilly and was just as funny. Another MASH veteran McLean Stevenson did very well too.
Like (1) Reply Delete

ThomasBrooks 17 months ago
Jo Ann Pflug and Elaine Joyce should be higher on the list!
Like (1) Reply Delete

PhilHall 17 months ago
How in the world could you forget Avery Schreiber?
Like Reply Delete

DouglasMorris 32 months ago
plus, Bob Barker!
Like Reply Delete

jeopardyhead 32 months ago
You left out Gary Burghoff [sp?] who substituted for Charles Nelson Reilly months at a time in 1975.
Like Reply Delete