9 things you never knew about 'Rhoda'

Who knew this sitcom had such an influence on cartoons? 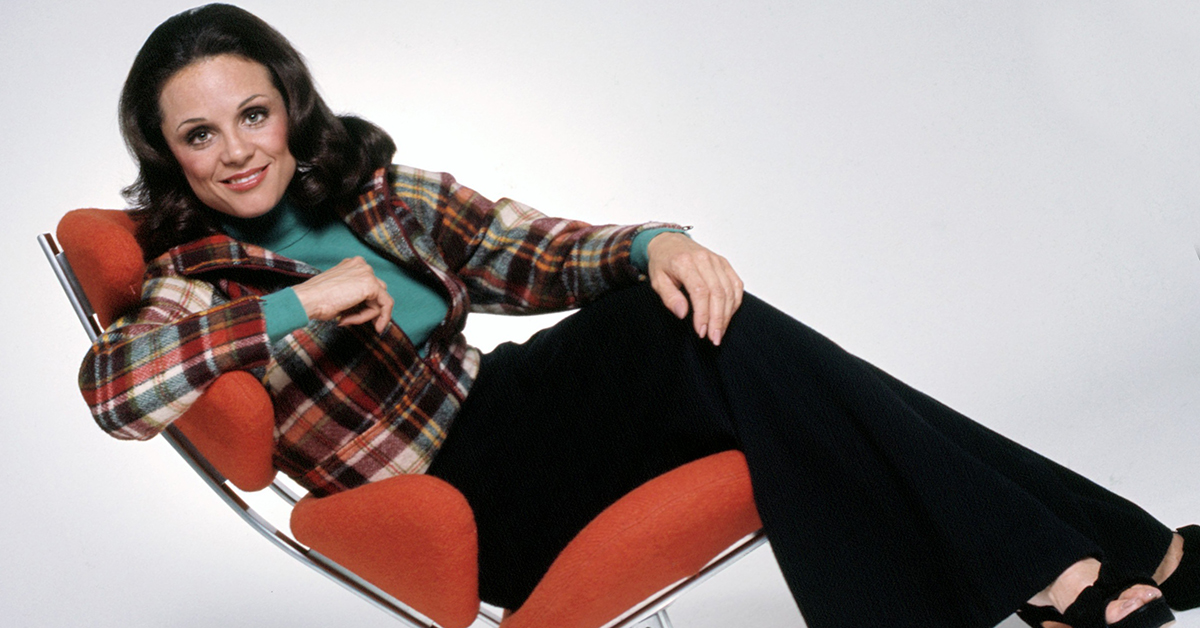 Who could forget those head scarves? Rhoda Morgenstern brought life and color to 1970s television, and helped redefine the single (and then married, and then single again) woman on network sitcoms. Brilliantly played by Valerie Harper, Rhoda was an immediate fan favorite on The Mary Tyler Moore Show, which led to her own hit sitcom, Rhoda, in 1974.

Just how popular was Rhoda? The series went head-to-head with Monday Night Football — and won. People loved the city dweller in Minneapolis and in New York City.

Let's take a deeper look into this classic series. 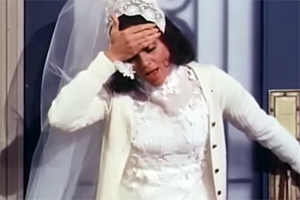 Early in season one, Rhoda got hitched to her flame Joe Gerard. The big event was the highest rated television episode of the 1970s, until Roots came along in 1977. More than 53 million Americans tuned in to watch Rhoda frantically run around New York City in her wedding dress. At the time, only the I Love Lucy episode "Lucy Goes to the Hospital" had been seen by more viewers. Rhoda and Joe would split a couple seasons later, and the sitcom shifted focus to the life of a divorcée.

2. Rhoda originally had a little sister named Debbie who disappeared. 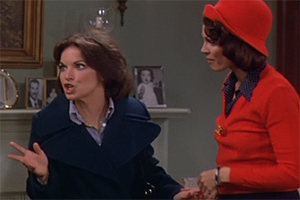 Speaking of weddings… A 1973 episode of The Mary Tyler Moore Show, "Rhoda's Sister Gets Married," introduced a younger Morgenstern named Debbie. However, when Rhoda rolled along a year later, Debbie was nowhere to be found. What happened to little Debbie? The character was played by Louise "Liberty" Williams, who would later voice Jayna, one of the Wonder Twins on Super Friends. 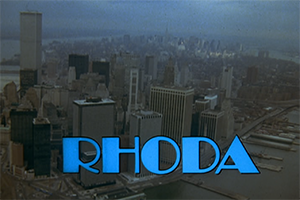 When Rhoda kicked off in 1974, Harper was earning $25,000 and a percentage in the series, according to a People article from the time. The deal was in part to help make up for the measly salary she made when she started playing the character four years earlier. When she began on The Mary Tyler Moore Show, Harper pulled in just $700 per week.

4. Rhoda's sister is the voice of Marge Simpson. 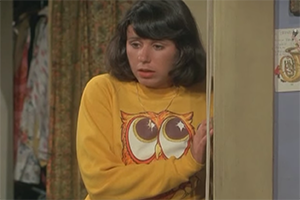 Julie Kavner portrayed the younger Morgenstern sister, Brenda. Today, the performer is best recognized as the voice of Marge Simpson. Brenda would not get married on the series, unfortunately. She gets engaged in the fifth and final season, and a wedding episode was planned, but the series was canceled midseason. Poor Brenda. 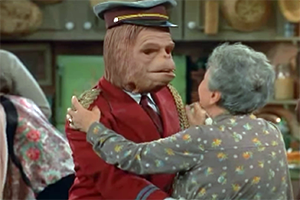 One of Rhoda's — and '70s TV's — greatest characters was Carlton, the mostly unseen, lackadaisical doorman in Rhoda's building. Rhoda and Brenda would often chat with him through an intercom by the door. (Carlton's body was seen briefly in two episodes, like when he wore an ape mask, seen here.) Lorenzo Music brought the character to life with little more than sound. He would go on to bring essentially the same voice to Garfield. When Music passed away in 2001, Garfield creator Jim Davis wrote in tribute, "I began to wonder if anyone could deliver the sardonic, lazy voice I was hearing in my head. Then Lorenzo sat down to the mike. He helped define Garfield."

6. Carlton got his own cartoon spin-off.

The obscure cartoon might be the ultimate Mary Tyler Moore Show trivia question, as it was a spin-off of the spin-off. This animated pilot aimed to explore his life. However, despite winning an Emmy award in 1980, the show was not picked up as a series and aired only once.

7. Carlton even released a song. 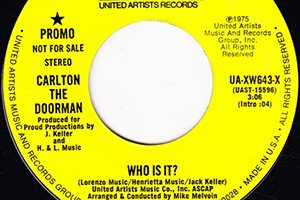 Yes, Carlton became quite the pop culture phenomenon. With a name like Music, how could the actor not record a song? Music released the single "Who Is It?" b/w "The Girl In 510" in 1975. The doorman proclaims, "No strangers can enter on my watch — but they can when I'm on break." Take a listen to it.

8. Nancy Walker left for a season. 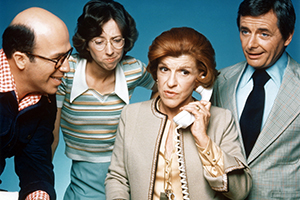 Nancy Walker and Harold Gould delighted audiences as Rhoda's parents, Ida and Martin. In season three, the 1976–77 season, Walker left the series to headline her own sitcoms, The Nancy Walker Show (seen here) and the Happy Days spin-off Blansky's Beauties. The writers explained the parents' absence by saying they were traveling the country in an RV. Both Walker shows flopped. She returned to Rhoda the following season. 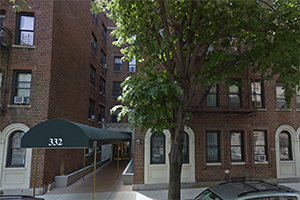 On the show, it is said that Rhoda lives at 332 E. 64th Street on the Upper East Side of Manhattan. In reality, the exterior shown onscreen sits at 332 E. 84th Street. Today, a unit in the building can run anywhere from $450,000 (for a one-bedroom flat on the first floor) to nearly $800,000 for two bedrooms. Hopefully they have a better doorman than Carlton these days. 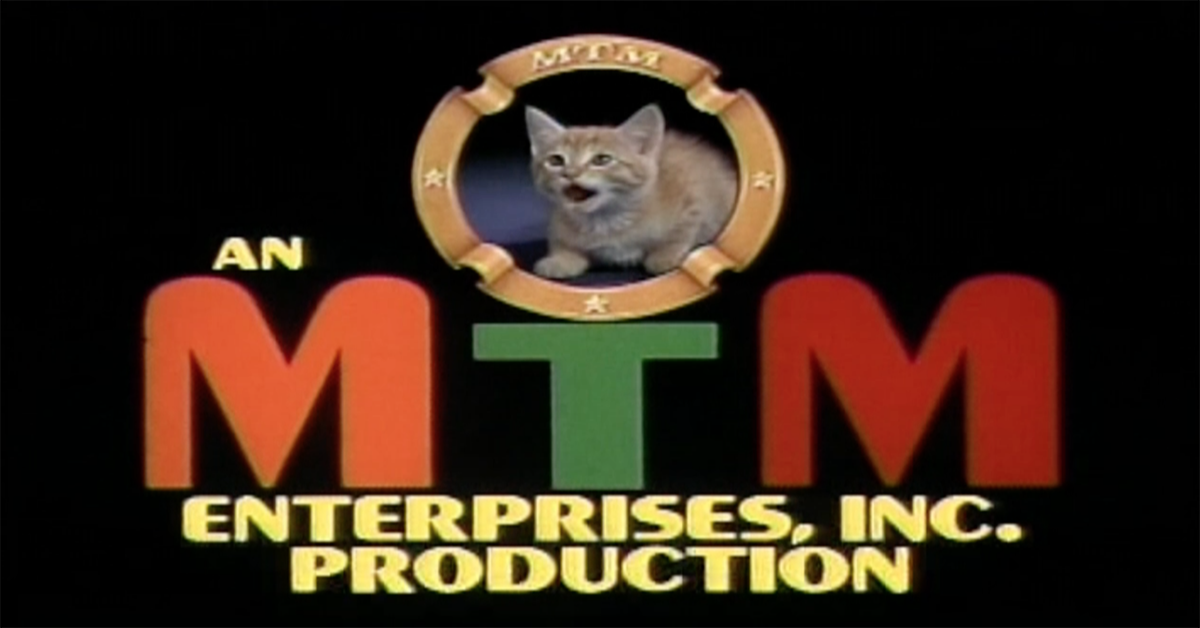 MichaelLederman 15 months ago
One has to wonder where you get your information from since Valery Haper only one ONE award for Rhoda.
Like Reply Delete

ErinWard 32 months ago
This is suppose to be a Brady Bunch quiz. What's going on here? I don't care about Rhoda. You goofed with this one.
Like (2) Reply Delete

ndebrabant 32 months ago
I clicked for a Brady Bunch quiz and was brought here. Hmmmmm
Like (1) Reply Delete

daDoctah ndebrabant 32 months ago
Click the picture instead of the button and you should end up in the right place.
Like Reply Delete

Diana 32 months ago
Take your scam elsewhere.
Like (1) Reply Delete

jimmypinet 32 months ago
Thank you MeTV...And thank you Ms. Harper for the love and laughter..."Mare, are you in there? Yeah, come on in Rhoda!"
Love from Texas...
Like (1) Reply Delete

Or drag a file here to upload
DocForbin 32 months ago
Let's not forget Lorenzo Music also voice Peter Venkman in the first ABC season and all the syndicated episodes of The Real Ghostbusters.
Like (1) Reply Delete
DocForbin PeterGuerin 32 months ago
Not to mention that he co-created the original Bob Newhart Show.
Like (2) Reply Delete

RedSamRackham PeterGuerin 32 months ago
Actually Bob Newhart's 1st show was a 1960 sketch comedy/variety show that won an Emmy but failed in ratings & got cancelled part way through season. Yet he succeeded in sitcoms years later. ☺
Like Reply Delete

Joyce 36 months ago
Don’t know how much research your MeTV staff did for this article,
https://www.metv.com/lists/9-things-you-never-knew-about-rhoda
but The Fugitive finale’s over 78 million definitely tops Rhoda’s 53 million. While I’m sure Lucy’s baby & Rhoda’s wedding got high ratings, they’re not listed in Nielsen’s Most Watched Series Episode by Decade. See below table from this link (scroll down on website):
https://en.wikipedia.org/wiki/List_of_most_watched_television_broadcasts_in_the_United_States
Like (1) Reply Delete