9 defunct grocery stores you will never shop at again

Big Bears and Food Fairs — it was once a Jitney Jungle out there. 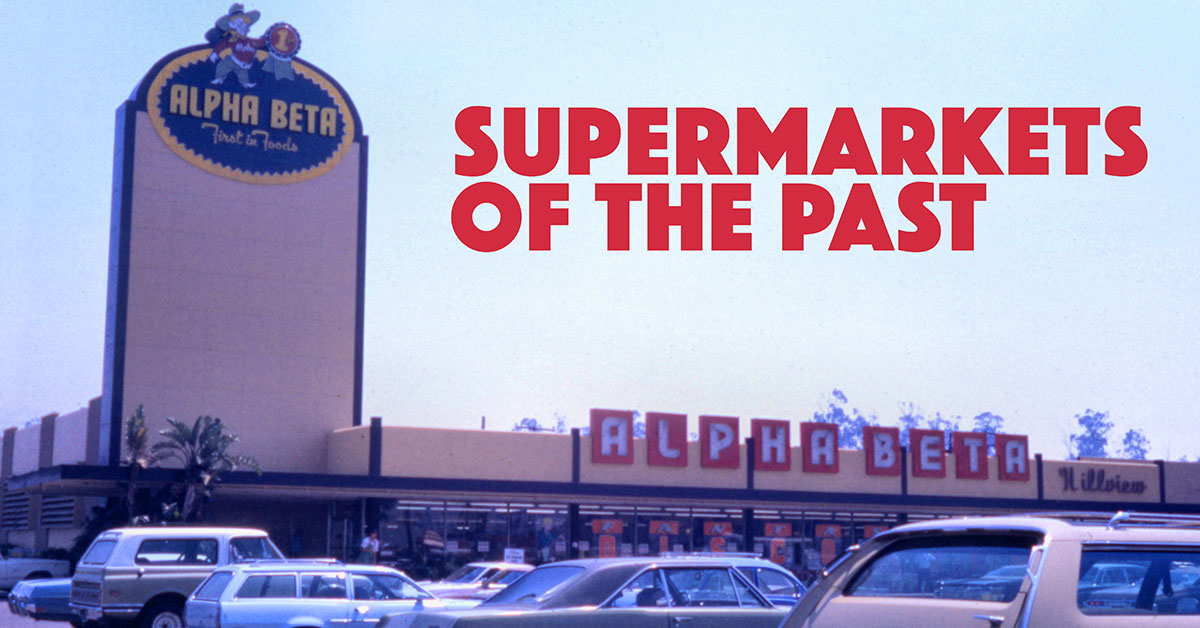 It's a dog-eat-dog industry, and over the decades different companies have swallowed one another. The grocery store where you once shopped with your mom, or where you bagged groceries as a teen, varied depending on where you lived.

There are dozens of chains that have come and gone, brand names that operated in different pockets of the country. We picked just nine names that stuck in our memory. If you don't recognize one, you probably grew up in a different state.

What bygone grocery store did you shop at in the past? 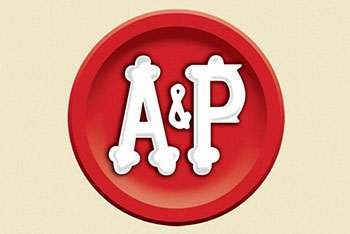 Ah, the Great Atlantic & Pacific Tea Company! Yep, that's what it stood for. At one time "A&P" was practically synonymous with "grocery store," like Kleenex with tissue. The chain died off just last year, after 156 years in the biz. They started the magazine Woman's Day and inspired a John Updike story. In the 1960s, the brand had people spouting its motto, "Who cares? We care!" It's hard to believe this once ubiquitous name is gone. 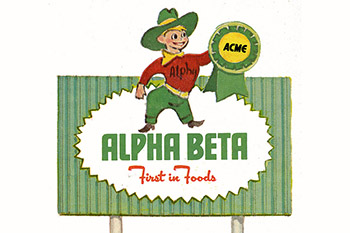 The Alpha Beta name lived from the 1910s to 1995. At different times in its life, the company was swallowed up by American Stores, Skaggs, Ralphs, Lucky, etc. We loved Alphy, the little cowboy mascot. Starting in California, the chain eventually reached much of the country. 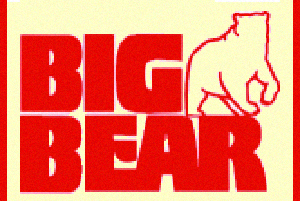 For three quarters of a century, Big Bear was an Ohio institution. The first store abutted Ohio State University, so you can bet they sold buckeyes. There were even some Big Bear stores in Southern California, too, but those do not seem to have been under the same corporate umbrella.

SEE ALSO: 7 DISCOUNT STORES FROM BACK IN THE DAY YOU PROBABLY FORGOT EXISTED 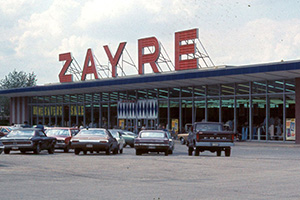 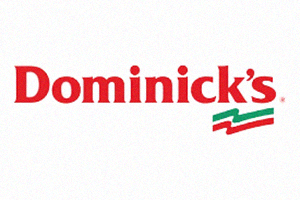 Those in the Chicago area don't have to think too far back to recall the dominance of Dominick's. They were all over the place. You know, where all the Whole Foods are now. At one point, the company also spun-off its Omni Superstores. Those too are all gone now. 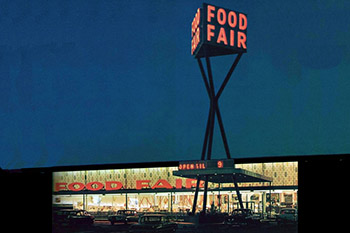 Food Fair opened in Pennsylvania in the 1920s, spreading its empire to include more than 500 stores at its peak. In the 1950s, Food Fair gobbled up the Setzer's Supermarkets chain based in Jacksonville, Florida. However, in the following decade, it morphed into the name at number nine on this list… 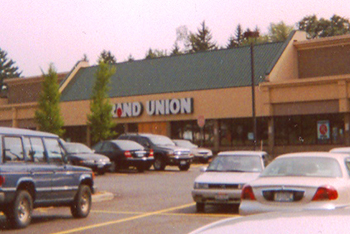 Those in the New York area and New England will remember the red dot of Grand Union. The company branched off into high-end and budget iterations, as well, with its Grand Union Fresh Market and Hot Dot stores. The name lived until just a few years ago, when the remaining stores were at last converted to Tops Friendly Markets.

SEE ALSO: 9 FIVE-AND-DIME STORES WE WISH WERE STILL AROUND 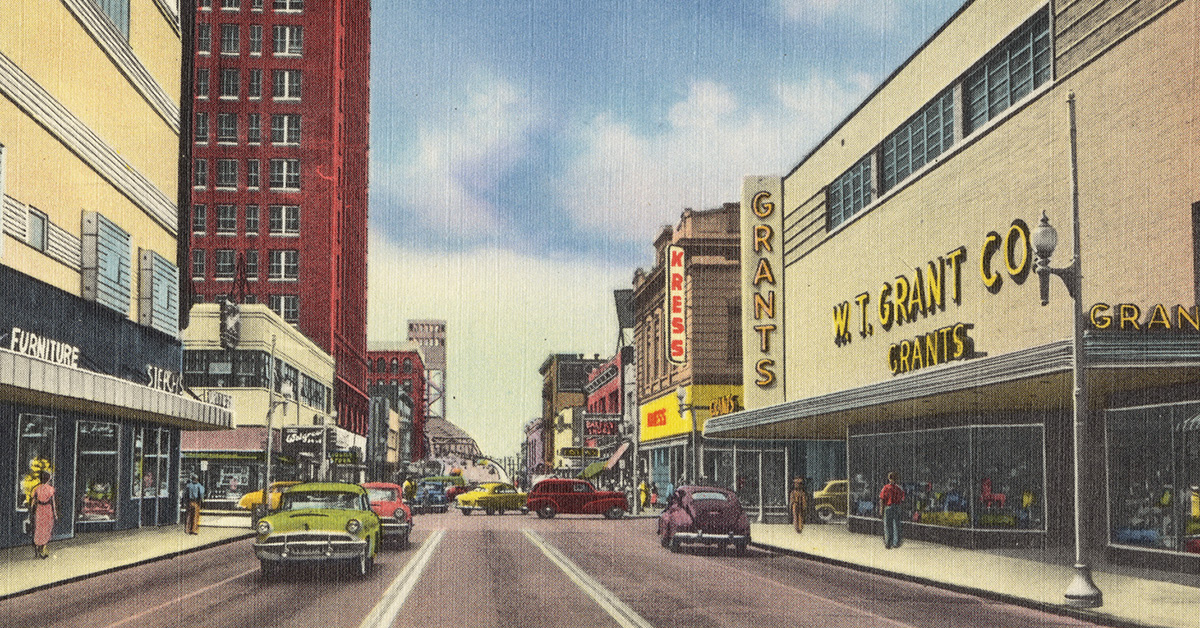 Back in the day, a dollar used to go a long way. READ MORE 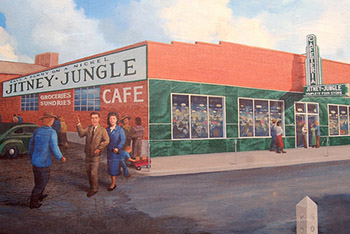 Southerners know how to brand a supermarket. Next to "Piggly Wiggly," no grocery store name is more fun to say than "Jitney Jungle." If you're wondering, "jitney" was slang for a nickel. Beginning in Mississippi, the Double J spread out across the Southeast. In 2000, Winn-Dixie sucked up both Jitney Jungle and Delchamps, rebranding all the stores. 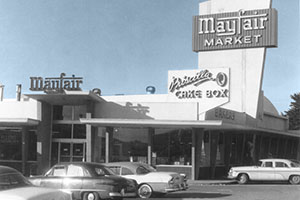 Pacific Coast denizens will have memories of the Mayfair name. There was one lone store holding on somewhat recently in Hollywood, until it finally converted into as Gelson’s. Alas, now they are gone. 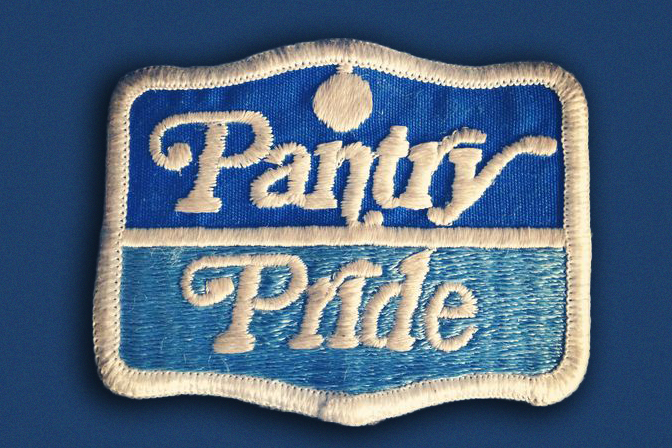 Before all Floridians became disciples of the almighty Publix, they were popping in to their local Pantry Pride. The brand was born in the 1960s, when Food Fair snatched up a chain called Best Markets, which had a private label called Pantry Pride. The nifty name was promoted to the front of the store, and began to outperform Food Fair. It had pretty much died off by the new millennium.

SEE ALSO: WE WISH WE COULD SHOP AT THESE DEPARTMENT STORES AGAIN 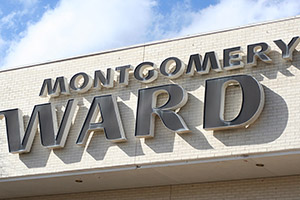 EricFuller 10 months ago
Being from Chicago there was Jewel, Dominicks, Kroger, Hillman's, National, and Del Farm.
Like Reply Delete

RobChapman 24 months ago
We had several regional chains that went the way of the dodo bird, or got gobbled up the corporate giants. Alpha Beta, as you mentioned above, QFI/Cala Foods, and then got bought out by Kroger and rebranded Bell Market, which later got sold to a local owner and eventually went bankrupt. Petrini's, an upscale local chain, that, you guessed it, got bought out by a corporate chain, and eventually went belly up, most locations are now either Lunardi's or Mollie Stones. Nob Hill Foods, which was another local chain, mostly in upscale areas, only has one store left. And then, there's Lucky (now Lucky California), once the second largest chain in the west, behind Safeway. Got bought out by and renamed to Albertsons, until they then sold all their Northern California stores to Save-Mart, who then rebranded them back to Lucky, although many locations were later sold to Safeway.
Like Reply Delete

Russ 24 months ago
Piggly-Wiggly anyone?

RaymondKristjanPoteet 28 months ago
I grew up shopping with my parents in the San Rafael California Mayfair Market. They were always giving away something or discounting something like dishes with your purchases. My mom sure did like the store.
Like Reply Delete

idkwut2use 32 months ago
I could swear there's still a Grand Union in Hancock, NY...though it has been a few years now since I was up there, maybe it's got a new name. Like the Clark, NJ A&P--loved the 90s version, then it moved further back from the street, and has since changed names once or twice. Acme or something. It'll always be A&P to me. ;3
Like Reply Delete

idkwut2use idkwut2use 23 months ago
Oh, and does anybody else remember Rex Gene’s?? Having grown up in north-central NJ I have some vague memories of the place.
Like Reply Delete

jeopardyhead 50 months ago
You left out Table Supply and Eagle's.
Like Reply Delete