We count down epic clashes including Kirk, Spock, Bruce Lee, bar brawls and a bear. 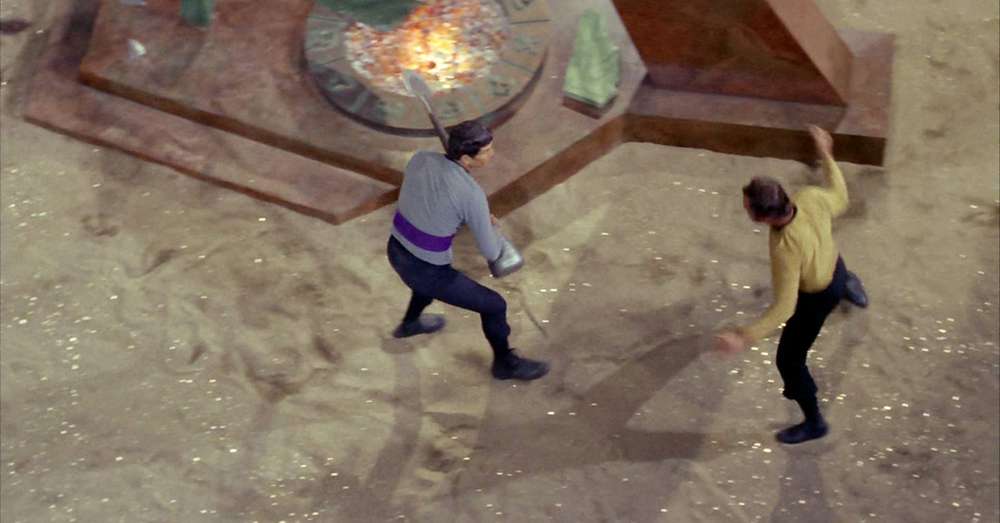 While Hong Kong–inspired fight scenes have always been a staple of action films, the small screen dabbles less frequently in artful fisticuffs. Kung fu fighting was all the rage in the 1970s thanks to Bruce Lee and, well, Kung Fu. Lee first earned fame in the '60s thanks to his pioneering role on The Green Hornet. We've included awesome examples from both in our list below.

Of course, television fighting goes beyond martial arts. There were good ol' barroom brawls and bare-knuckle scraps — not to mention wrestling with wild beats. One of the most memorable fights in TV history was not a fight at all. We love when Fonzie comes to Richie's rescue in the Happy Days episode "A Shot in the Dark." The Fonz prevents a punch-up by knocking down the bathroom doors with his fists as "a warm-up." It's tough and cool, but not fitting here. Here then are eight of the most memorable fights in classic television.

What do you think are the most memorable fights? 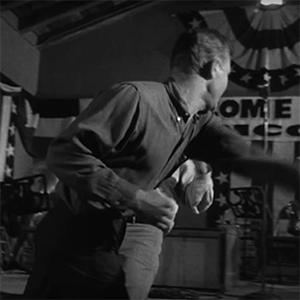 This episode introduced Lincoln "Linc" Case, and establishes the character as a brooding scrapper. The episode opens with a vicious sidewalk clash outside a Bar-B-Q restaurant, as Linc takes on a group of brutes. The scene is filmed beautifully in low-angle shots. His later fight against Milner's Tod Stiles tops it, though, as the two trade blows in an auditorium, throwing each other into chairs. Like the Route 66 series itself, its impact lies in its realism, with the rhythms, wounds (both physical and psychological) and emotions of a honest fight. 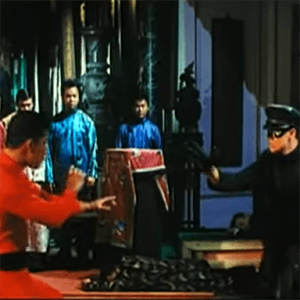 There's a good chance many Americans had not seen a kung fu fight on television until Bruce Lee slipped on the mask as Kato. In stark contrast to the campy tone of Batman, The Green Hornet played it straight. In the tenth episode of the series lone season, Lee takes on another legendary Asian actor, Mako Iwamatsu, better known as simply Mako. A few well-placed body blows settle it — a taste of Lee's one-inch punch. 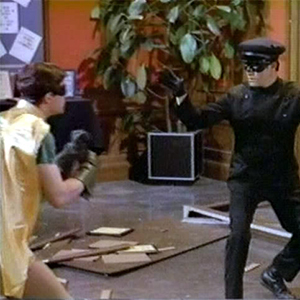 Lee is a titan, and we would be remiss not to include him twice. In this second part of a crossover between Batman and The Green Hornet, the sidekicks get the spotlight. It is purported that Lee refused to lose to Ward, and who can blame him, as the fight hardly seems fair in that title card above. After busting up some furniture, the two end in a draw. 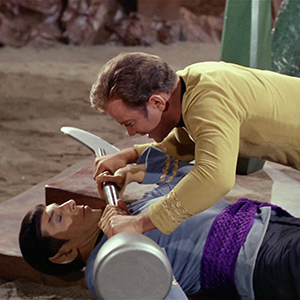 Who could overlook this hall-of-fame Star Trek? Perhaps the most famous one-on-one in television history pits two heroes against each other. The tension is palpable, and those weapons! The traditional Vulcan Lirpas, which Kirk and Spock bang together, are the stuff of cosplay legend. This fight has been parodied and referenced again and again over the last half century. 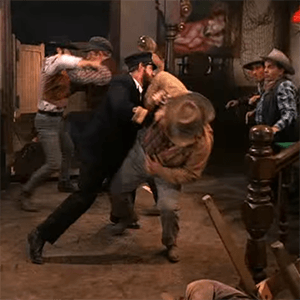 "The Night of the Egyptian Queen"

With dozens of television westerns to choose from, there is no shortage of saloon fights. We went with the one that ruffled the feathers of censors the most. In one 1968 article, a Hollywood reported noted that Wild, Wild West "is one of the action series being watched by network censors for scenes of excessive violence, even if the violence is all in fun." After requests to tone down the mayhem, the show delivered this gem, a perfect bar brawl, complete with flying bodies and shattering props. 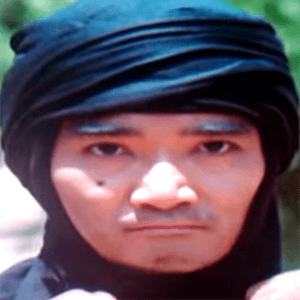 Carradine's wandering monk Kwai Chang Caine was largely responsible for planting the tenets of Shaolin in the minds of young Americans. As the title implies, the show was riddled with fights, but this one in particular stands out, Caine's only clash with a ninja. The two battle in a mountainside stream. Throwing stars and a katana blade add up to being no match for our hero. 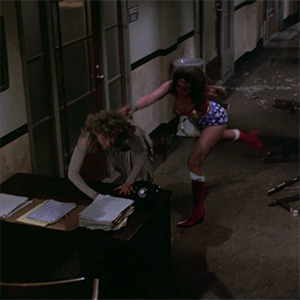 The pilot movie for Wonder Woman premiered 40 years ago and there are many things to love about Lynda Carter's debut as the Amazonian warrior. In the climax of the show, Wonder Woman takes on Marcia the Nazi in a rough-and-tumble clash. Marcia bashes Diana over the head with office furniture and lobs an American flag. That won't stand, naturally, and the baddie gets tossed into a desk. It showed that women could do these gritty scenes just as well as men. 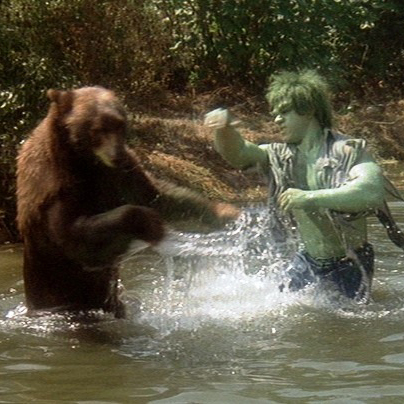 "Death in the Family"

The Hulk. Punching a bear. A real bear. Enough said. (Although, when the Hulk throws the bear, it's clearly a giant stuffed animal. We'll let that pass for obvious reasons.) Bear "actor" or not, it took guts for Ferrigno to wrestle with the animal in close quarters.