Get into the spooky seasonal spirit with these hilariously eerie episodes. 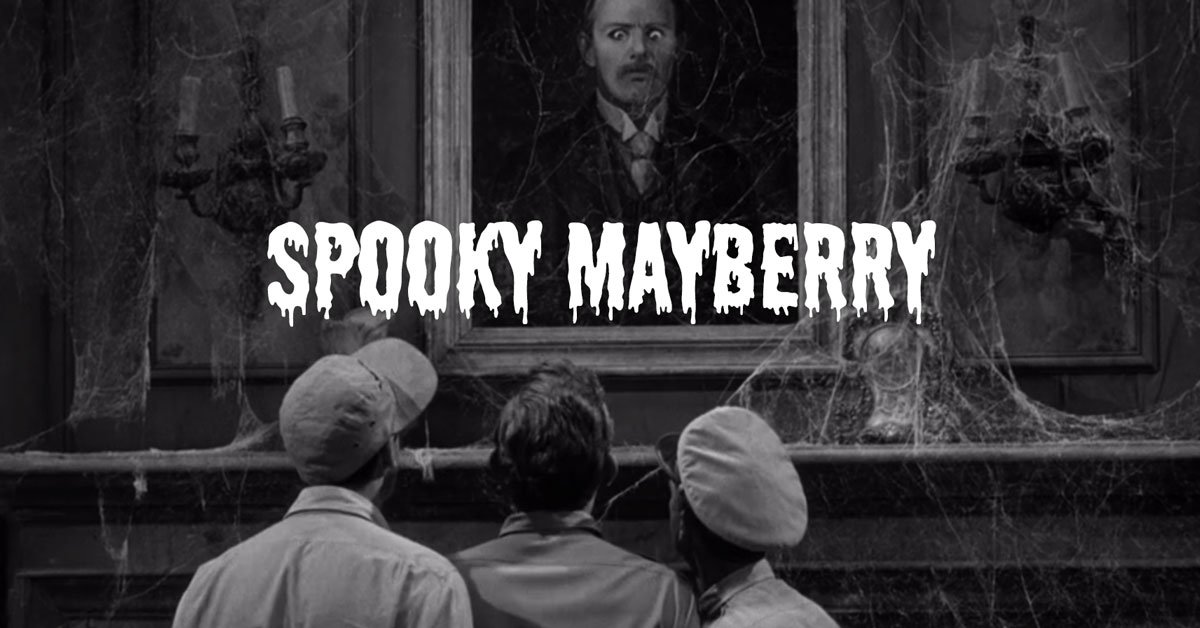 Mayberry is the quiet kind of town where a community parade or a fishing mishap makes the front page of the newspaper. It's a peaceful place to raise a family. Heck, there are only two police officers. That being said, even the all-American Andy Griffith Show did dabble with the supernatural and superstition from time to time.

In seasons four and five, in particular, talk of ghosts, witches, hexes and curses frequently popped up. If you think about the competition at that time, it makes sense. Bewitched, The Addams Family and The Munsters all kicked off in 1964. Perhaps it was inevitable that a little black magic would work its way down to Mayberry.

Of course, nothing on The Andy Griffith Show was truly eerie or unexplained. Even the sitcom's most Halloween-y episode was more of a Scooby-Doo scenario.

Here are eight episodes of Andy for fans of the spooky. 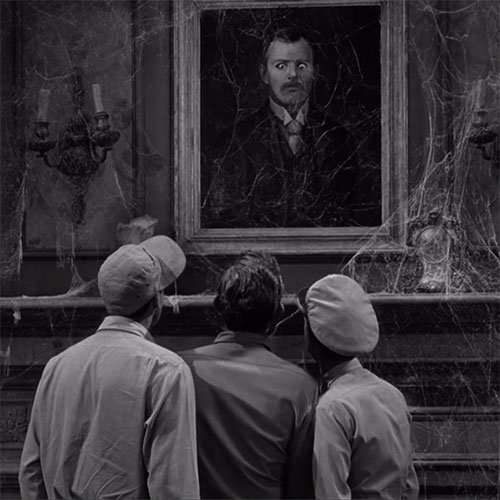 Where else to begin? With cobwebs, moving eyeballs in paintings, and floating hatchets, "The Haunted House" is the closest The Andy Griffith Show came to horror. Comedy-horror, of course. This Halloween tale (it originally aired in October 1963) would go on to heavily inspire the Don Knotts motion picture The Ghost and Mr. Chicken, which featured not only a similar plot, but many familiar Mayberry faces. 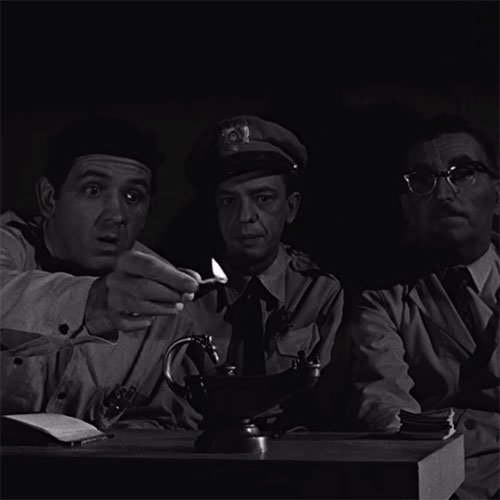 The seance scene, seen here, is perhaps the darkest moment in the happy-go-lucky series. Literally. Look how dimly lit this moment it. Barney attempts to reach the spirit of Count Istvan Teleky, a dead nobleman from Transylvania. You know, like Dracula. Goober seems rather spooked by the mystic arts. "It sure is dark in here," the cowering Floyd the Barber notes. It reminds us of when we brought out the Ouija board at slumber parties. 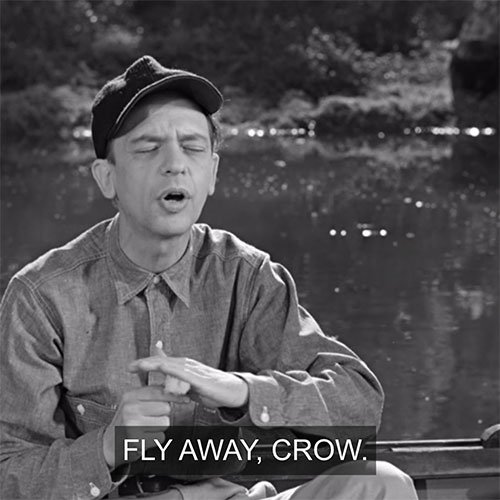 It's no surprise that Barney is the most superstitious fellow in Mayberry. Some of his biggest laughs come from his old-fashioned beliefs. In this episode, we see the deputy read from a dusty volume titled Signs, Omens, Portents and Charms to Ward Off Bad Luck. It's a book of spells, from his grandmother. Which means Fife has a little witchery in his blood. That's why he chants goofy incantations like "Sam’s at the gate, with a frosted cake… Fly away buzzard, fly away crow, way down South where the winds don’t blow" and "Wynkum, Pynkum, Nodimus Rex." He also rubs Opie's head for luck. 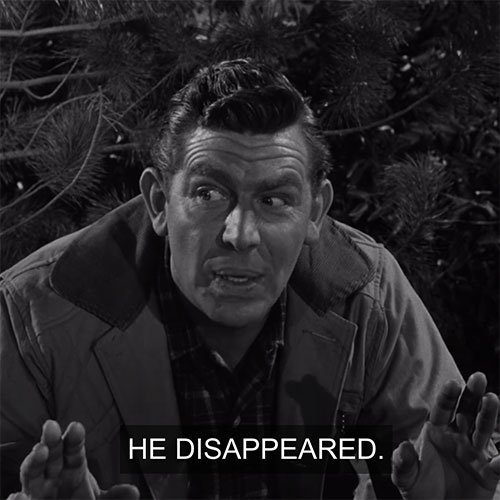 What is a campfire without a solid ghost story? (And s'mores.) Sheriff Andy tells a whopper. Bug-eyed Barney and Gomer shiver more than the kids. In Andy's spooky tale, a man gets a golden arm after losing his appendage to a bear. Upon his death, bandits steal his golden arm, cursing him to wander the woods, moaning, "Where is my a-a-a-arm!"

If anyone is more superstitious than ol' Barney it's the Darling clan. Here, Andy uses "witchcraft" (well, Opie's disappearing ink) to scare the heck out of the hillbillies. "Eebum-shoobum-shoobum-shoobum," the sheriff mutters in his best mumbo-jumbo. "You got witchery in your house!" Briscoe hollers before shooing away his brood.

6. A Warning from Warren 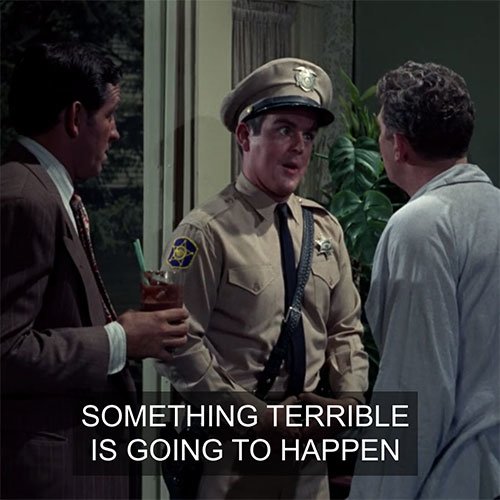 Once Barney bolted at the end of season five, a new deputy took over. Warren carried many of the same superstitions. In "A Warning from Warren," he even claims to have the powers of ESP (extra-sensitive perception, his predecessor would say). A sinister vision comes to Warren — Andy and Helen are doomed for a dark outing at the lake. Of course, these goofballs end up causing the havok. 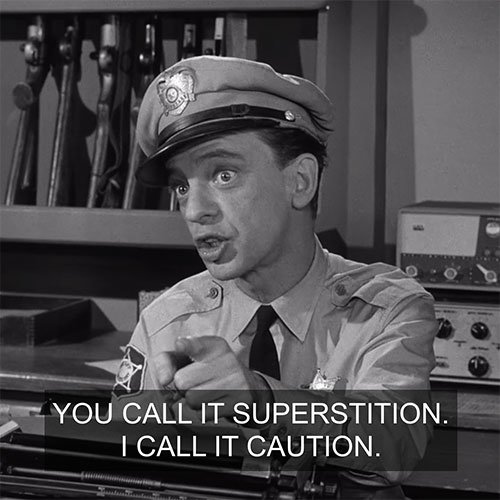 "You call it superstition," Barney corrects his boss. "I call it caution." Barney is convinced ill fate will befall him if he does not respond to a chain letter. Barney trashes the letter… which leads to a series of misfortune. He bumps his head, cuts himself shaving, gets his foot run over by a truck, and nicks himself shaving. Don't mess with the power of the chain letter! 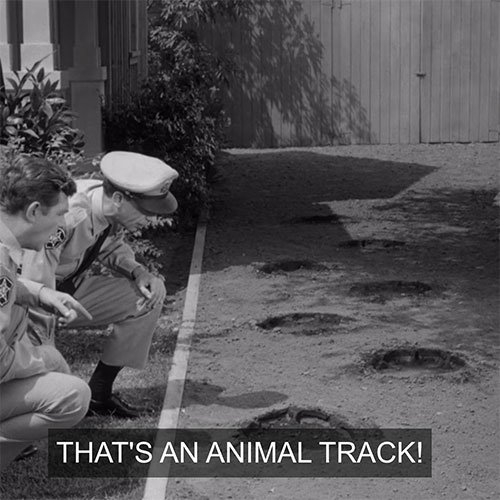 Ok, this is a stretch, as it does illustrate how gullible Barney is for all things supernatural. He would certainly be into googling skinwalkers and aliens today. In a way, both cryptids and abduction play into this plot. A cow mysterious disappears with only human footprints left as evidence. In the final scene, we see the prints of some kind of "bigfoot" beast. Turns out, as we quickly learn, it's just a cow with boots and Opie with an elephant foot. This plot also foreshadows how Ernest T. Bass tricks townspeople in Return to Mayberry when he makes "monster" footprints with plaster. 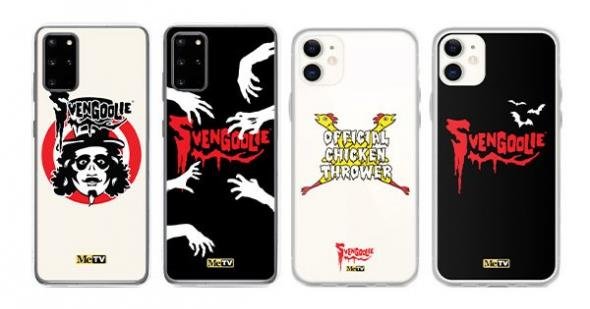 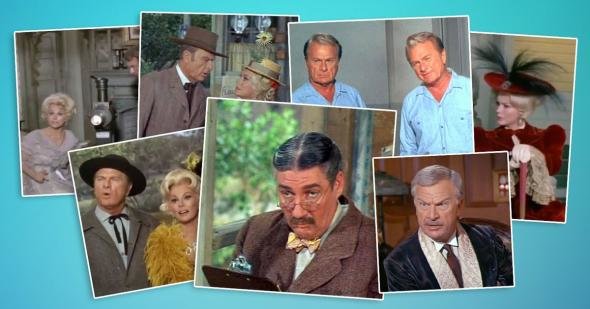 Did you know?
9 Green Acres episodes where the main cast played someone other than their usual characters 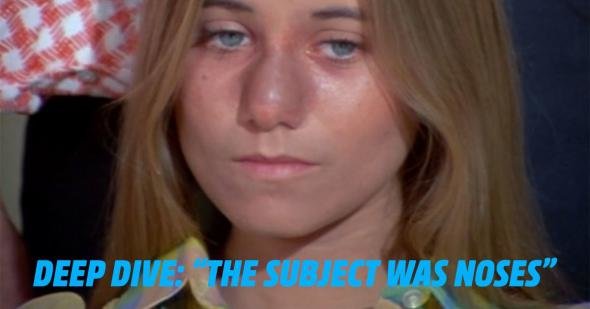 Deep Dive
5 in-your-face details you never noticed in The Brady Bunch ''The Subject Was Noses''
Are you sure you want to delete this comment?
Close

3pittsburgh 22 months ago
The haunted house episode was the best by far.
Like Reply Delete

Ralex 22 months ago
What about when Charlene Darling buried the bag of things and became engaged to Andy?
Like (2) Reply Delete

varep81861 22 months ago
I get paid over $190 per hour working from home with 2 kids at home. i never thought i'd be able to do it but my best friend earns over 15k a month doing this and she convinced me to try. the potential with this is endless...,

madmark1 22 months ago
The haunted house on Andy Griffith was one of my favorite episodes. Anytime Gomer and Barney got together made for a very funny show. The three wishes for Opie episode has always intrigued me.I wonder if there was such a man known as Count Istvan Teleky?
Like (5) Reply Delete

hermanstein2015 22 months ago
Also some of my favorite episodes! The writers really knew what they were doing, and Gomer in that haunted house episode was just right! Lol
Like (4) Reply Delete

think about it - if you saw eyes watching you from a picture ; that's impossible. The person that would be watching you couldn't have a nose as his hers nose would have to stick through the painting

MikeyMello 22 months ago
I have always wondered if the Haunted House episode may have triggered “The Ghost and Mr. Chicken” Watching that movie is almost like watching a color episode of Andy Griffith.
Like (5) Reply Delete

Kthompson MikeyMello 22 months ago
Yes, I actually researched it and I am pretty sure that it is based off it
Like (1) Reply Delete

MikeyMello Kthompson 22 months ago
That makes sense. There are several TAGS characters in The Ghost and Mr. Chicken. I love that movie!
Like Reply Delete

RossE MikeyMello 22 months ago
I remember reading that Don Knotts asked Andy Griffith what he thought of him being in a movie about a haunted house. Obviously it was a great idea! 🙂
Like Reply Delete

BurnJika 22 months ago
All great shows, but my favorite “spooky” episode is the Haunted House!
Like (2) Reply Delete

MrsPhilHarris BurnJika 22 months ago
Love that one too.
Like Reply Delete

Pacificsun 22 months ago
Great spotlight on TAGS episodes for October Spooky! Thanks MeTV!!
Like (2) Reply Delete

Moriyah 22 months ago
I wonder if there are any Gomer Pyle episodes with a spooky tone!
Like (1) Reply Delete

stephaniestavropoulos Moriyah 22 months ago
You can't be much of a GP fan, if you are asking others to answer questions you can find out for yourself. There is book on GP USMC called "Gomer Says Hey." You will find all the answers you crave in there. Or Google your questions, and you will also find them that way.
Like (3) Reply Delete

Moriyah stephaniestavropoulos 22 months ago
I really am a huge GP fan!
Like Reply Delete

Pacificsun Moriyah 22 months ago
Hi Moriyah! You know, sometimes it's just fun to talk about your favorite show in print. Every fan has their own favorite and likes to see it written about, especially on the MeTV site. In looking over the Gomer Pyle list of episodes it doesn't look like they did seasonal storylines. So nothing related to Halloween or a spooky story. (Unless you remember something from one of these titles). Here's the link to all the episodes:
https://en.wikipedia.org/wiki/List_of_Gomer_Pyle,_U.S.M.C._episodes

Here's question for you! (Without looking yet). What was the name of an episode in which Frank Sutton (Sgt. Carter) didn't appear! Bonus points if you know in which season!!

Have fun. Your answer will be in the link I provided.
Like Reply Delete

Pacificsun stephaniestavropoulos 22 months ago
See my reply to Moriyah below. Every fan likes to see their favorite Show mentioned to create some conversation.
Like Reply Delete

jrmaul 22 months ago
Three Wishes for Opie is the series’ best episode.
Like (3) Reply Delete