7 fascinating facts to learn about Michael Learned of The Waltons

The Olivia Walton actress holds an Emmy record and was barely older than her onscreen children. 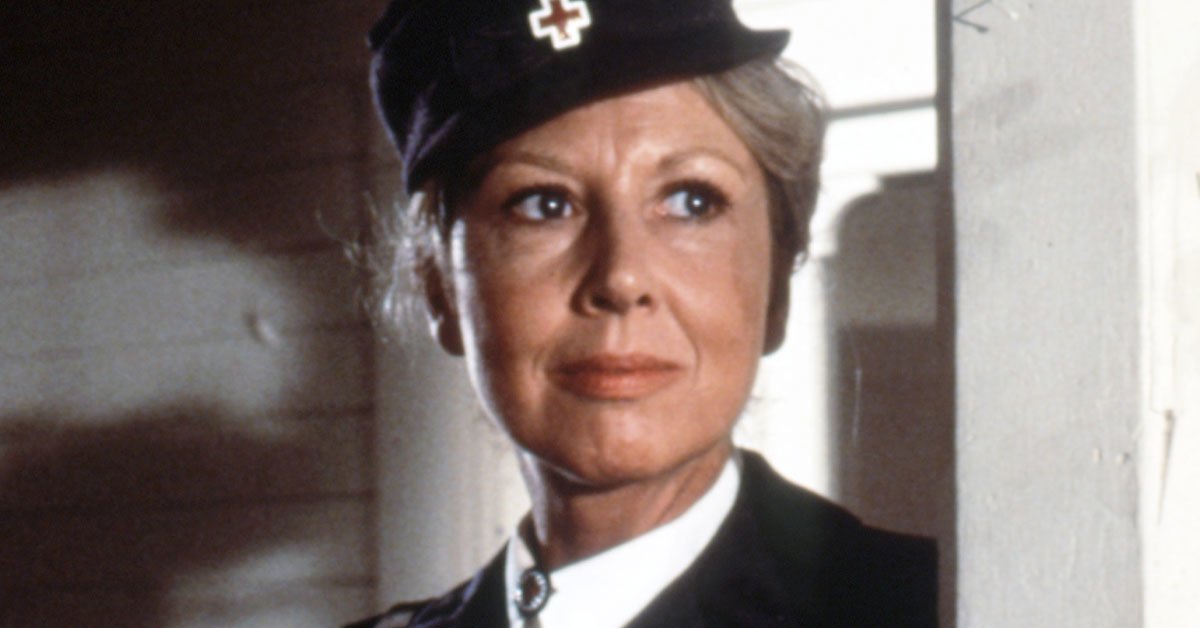 John-Boy Walton is the main character and narrator of The Waltons. He is the onscreen representation of series creator and writer Earl Hamner, Jr. But in many ways, Michael Learned served as the center of the show.

Playing the matriarch of the Walton family, Olivia, Learned earned much of the acclaim given to the popular drama. She also acted in more episodes than Richard Thomas, who largely disappeared from the series after season five of nine. Somebody had to look over all those kids.

Of course, Learned was part of a wonderful ensemble cast. By her own account, the cast was like a family itself. As we get to know the Waltons better, let's learn more about the talented Michael Learned.

1. She is only 12 years older than Richard Thomas. 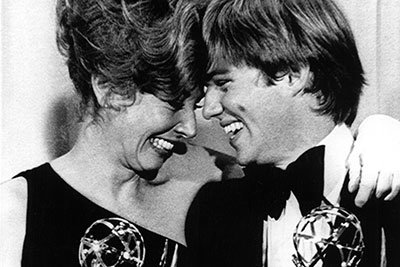 Learned may have played Thomas' mother onscreen, but offstage she was a mere dozen years his senior. Conversely, she was 11 years younger than her fictional husband, John Walton, played by Ralph Waite. 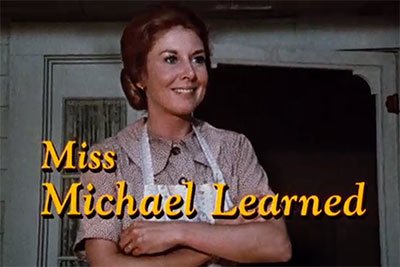 The Waltons was Learned's first major television role. Series producer Lee Rich discovered her in a theater, as she was acting in a lead role in the Noel Coward comedy Private Lives. Because American audiences were unfamiliar with Learned, The Waltons called her "Miss Michael Learned" in the opening credits of early seasons. Producers worried that viewers would be confused about the gender of "Michael." Learned had married young, at the age of 17 in 1956. She had divorced her first husband, Peter Donat, in 1972, the same year that The Waltons premiered. She was not a "Miss" for long — she married again in 1974.

3. She played a character on Gunsmoke named "Mike." 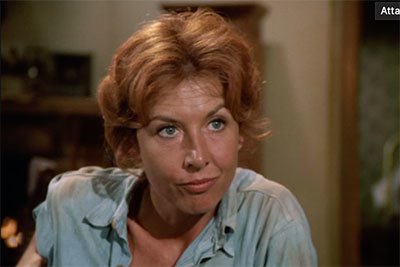 After making a name for herself in season one of The Waltons, Learned jumped from the mountain to Dodge City for a guest appearance on Gunsmoke in the episode "Matt's Love Story." She played a tough, cool widow named Mike Yardner, who falls in love with an amnesiac Marshal Matt Dillon. "I was supposed to be a boy," Mike tells Matt, explaining her name. That was not the case for Michael Learned. Born to a diplomat, Michael has said in interviews that her parents intended to call her "Caleb" had she been born a boy. "Michael" was their pick for a girl's name. 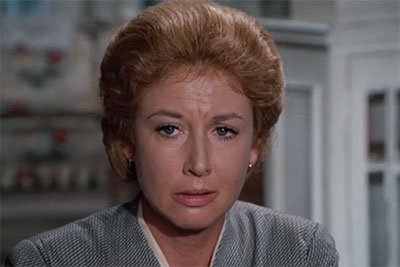 Learned helped hone her character in collaboration with writer/creator Earl Hamner, Jr. In a recent conversation with Smashing Interviews Magazine, Learned recalls telling Hamner, "You've got to have Olivia make a mistake and punish the wrong child or something a little more human." Hamner was basing Olivia off his own mom. "Earl, didn’t your mother ever do anything wrong ever?" she asked Hamner. "No," he replied. Nevertheless, he relented. "I think that was part of the charm of the show," she told Smashing, "that we weren’t perfect — at least not in the first two years."

5. She is tied with Tyne Daly for an Emmy record. 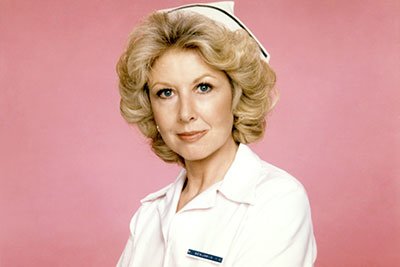 Learned took home three Emmys for Outstanding Lead Actress in a Drama Series for her work on The Waltons. She won a fourth starring in the overlooked medical drama Nurse, a series which cast her alongside former Brady Bunch father Robert Reed. Despite critical acclaim — and bringing together two beloved TV parents of the 1970s — the 1981 series lasted just two seasons.

6. She is a self-proclaimed potty mouth. 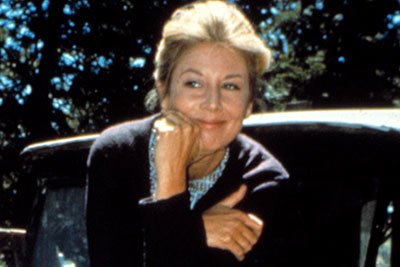 The Waltons may be the epitome of the wholesome American television family, but behind the scenes, things were a little more R-rated. "Ribald. Dirty jokes. Cussing." That's how Learned described the vibe on-set of The Waltons in a 2015 interview with the Archive of American Television. "I have a filthy mouth. I try not to, but I do… that's who I am, I'm sorry."

7. Will Geer used to moon her before scenes. 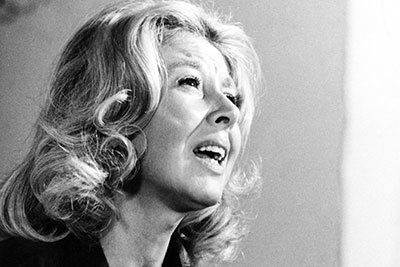 "We had a lot of fun," Learned said in the same Archive of American Television interview. To further the point, she described how the elder patriarchs of the Walton family pranked their costars. Ralph Waite (John Walton, Sr.) and Will Geer (Grandpa Walton) "insisted on mooning [the cast] any chance they got." Learned confessed with a smile, "I saw more of their rear-ends than I ever wanted to see."

jeanafrazier1966 16 months ago
I didn't know any of these things about Miss.Micharl Learned.Its fun finding them out!
Like Reply Delete

UberPirate 27 months ago
We stopped at the real Hammer home on the way out of DC before the pandemic. It's sustained us but more than anything how did we end up with people like Trump and his administration in a world that created the Waltons? What happened to us as a society. Was it Survivor and Hells Kitchen where the most ruthless and under handed are elevated that got us here or have we always just been this terrible? Thank you for sustaining us through it all. Nov 3rd and a brave new world.
Like Reply Delete

Jonelle UberPirate 24 months ago
This is Walton's talk.... not sensitive male talk ...sheesh...
What a weak effeminate man. Were you born without a father? What woman would ever want someone so pathetic? Relax baby-cakes, your boogey man is gone... Go get mom to make you some hot coco to settle your upset tummy. What a complete failure, try harder weakling
Like (1) Reply Delete

LoneWolff1955 27 months ago
I've been watching The Waltons. & now that she agreed to get married to the doctor, she finds
out, that Curt might still alive😳😳😳I thought he died at Pearl Harbor! Are they going to bring Curt back, what about Livy, & Grandma???
Like Reply Delete

MichelleBialek 30 months ago
Easier to picture Michael cussin' than Olivia! That's the magic of television!
Like (1) Reply Delete

3233375803 30 months ago
Love the Waltons especially Michael Learned. Haven't missed episode. how do you even bought the DVDs. Need season 9.
Like Reply Delete

leebillyold 37 months ago
interesting, not like Will Geer's mooning. good show, been watching, still like all Actors and Actress from the Walton's tv series
Like (2) Reply Delete

Easter1961 37 months ago
My all time favorite show.....my mother always popped corn and sliced apples to enjoy Thursday at 8pm when the waltons aired. It is one of the happiest memories I have from my childhood.
Like (2) Reply Delete

LadyAgnes 37 months ago
The Waltons is my favorite show of all time. It was an imperfect family who gave perfect love & understanding. They made mistakes, but they were always there for each other. I love watching it.