Fort Lauderdale was the hot spot for sun, surf, Elvis, boys and girls. 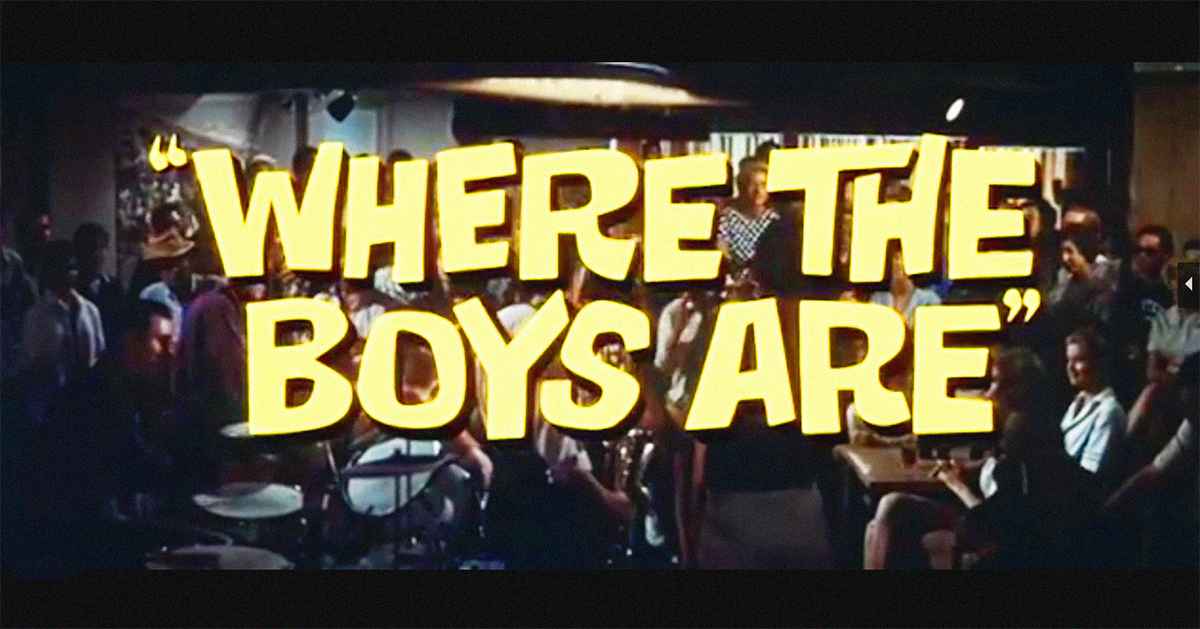 The most unheralded performer in 1960s cinema is sand. Never before or since had the beach played such a prominant role in movie plots. Annette Funicello and Frankie Avalon built a beach franchise — a beach empire — for American International Pictures.

But because of the season, we are going to focus on a more specific type of beach flick — the spring break movie. The practice of spring break partying exploded in the 1960s, mostly due to the first film below. Teenagers and college kids had cars, free time and an itch to surf. Fort Lauderdale was the place to be.

Which was your favorite spring break movie? Where did you go with your friends to vacation? Sing along now, "Wheeeerrrrre the booooys are…" 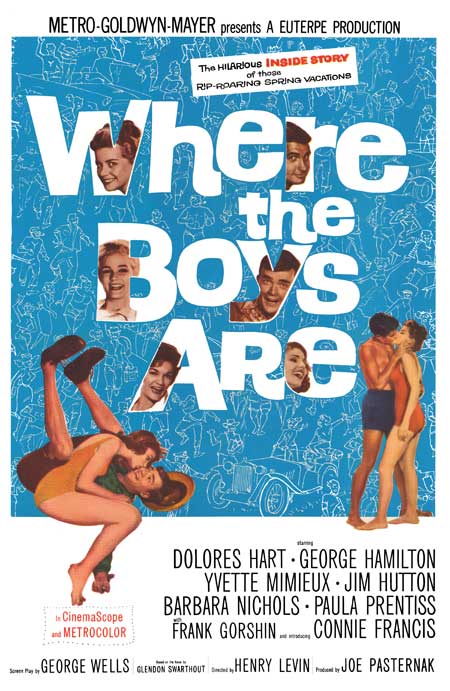 No piece of entertainment had a more profound effect on the vacation habits of 20th century college students. Fort Lauderdale was the original spring break destination, dating back to the 1930s, when Colgate University swimmers would flock to the Florida city for warm weather training. By the end of the 1950s, Fort Lauderdale had become such a hot spot that a Michigan State professor wrote a novel about its spring break scene, Where the Boys Are. The film adaptation hit theaters at the close of 1960, and when spring break rolled around three months later, 50,000 college kids flooded the town. George Hamilton's bronze tan and Connie Francis' theme song would inspire countless adolescents. Heck, even the Yankees started coming to Fort Lauderdale for spring training starting in 1962, making party locales like the Elbo Room and Pier 66 Hotel tourist landmarks. 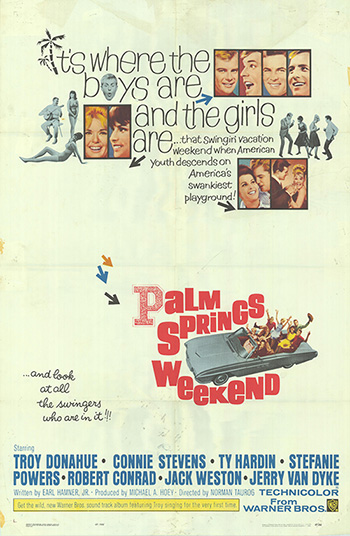 For students on the West Coast, Fort Lauderdale was too far a trek. California kids, already spoiled by the beach, instead went inland to Palm Springs. Where the Boys Are clearly inspired this flick, which cast its own Connie (Stevens) and used the tagline "It's where the boys and the girls are." As one dapper character says in the trailer, "Palm Springs is where it swings." He says this in between Jerry Van Dyke excitedly proclaiming, "Girls!" Weekend was also Dawn Wells' movie debut. You can also spot a young Bill Mumy. 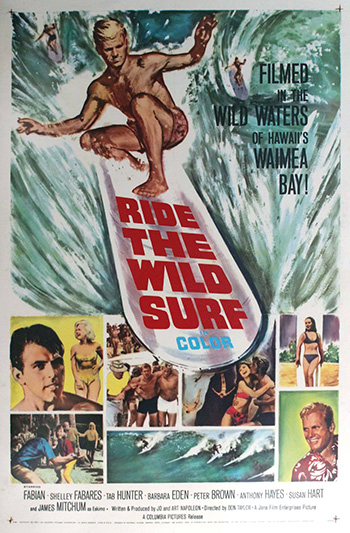 Three young men head to Hawaii's Waimea Bay for an annual surf competition. The filming of the action in the waves is stunning, as the surf was particularly meaty during production. Pop singers Fabian and Shelley Fabares were cast as leads, yet the two oddly never croon a tune. Wild Surf takes itself a little more seriously than most other beach blanket bingos. The Jan & Dean theme is fantastic. Television lovers will take note of Barbara Eden a year before she slipped inside the Jeannie bottle. 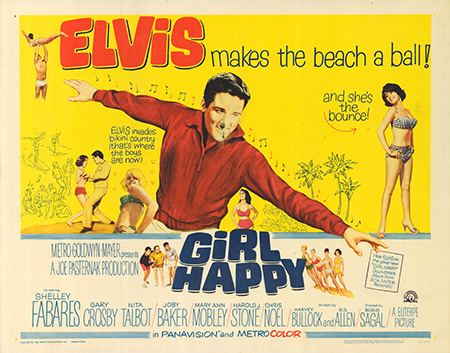 Of course Elvis was going to ride this wave, too. He heads to Fort Lauderdale (that place again) with Shelley Fabares (her again) for some love in the sun. Teen fans of the King would perhaps leave disappointed, as Presley never once takes off his shirt, hitting the beach and long sleeves and even water skiing with his top on. The soundtrack's "Puppet on a String" and "Do the Clam" would both chart. 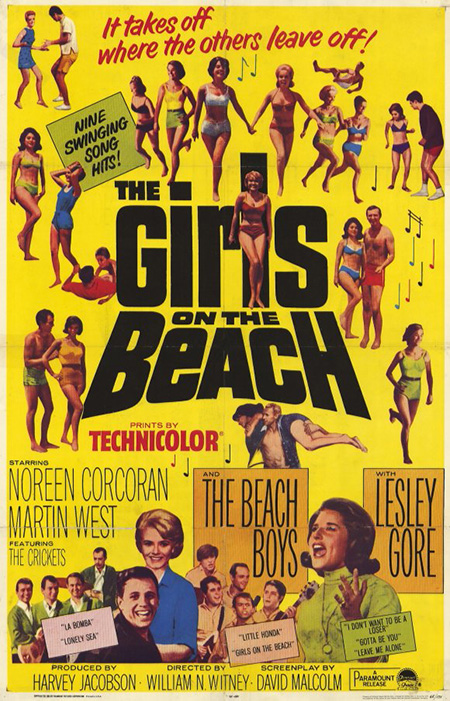 Alpha Beta girls go to great lengths to save their sorority house. Half a decade later, movie trailers were still relying on the lure of "Where the Boys Are! Where the Girls Are!" This 1965 big screen party was built around pop, and that is fine by us, because the combination of the Beach Boys, Lesley Gore and the Crickets delivered the best music of this movie micro-genre. "Yeah, coyotes, your favorite foxes will wig when they see this flick!" the preview proclaims, in perhaps the most 1960s sentence ever. 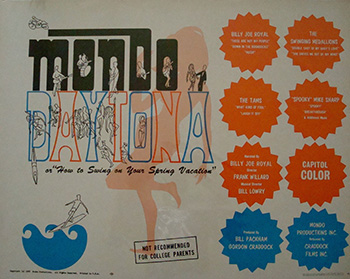 By the end of the decade, Fort Lauderdale was overrun and the party had moved a bit north. This underground obscurity was far bolder in showing what happened on the Atlantic shores of Florida in March. It's a rock & roll film filled with bikers, necking and Grand Funk Railroad.

idkwut2use 18 months ago
Liked Where the Boys Are (& the song) and Girl Happy!
Like Reply Delete

TikiDan 18 months ago
MeTV needs a Friday night showcase playing these types of Movies. Appointment TV! Could also include campy 60's SciFi movie screenings (The Blob, Santa Claus Conquers the Martians). The swanky 60's detective movies would be perfect for the showcase (Matt Helm, Tony Rome). The weekly host can give background info on the movie and it's stars. Let's do it!!

LittleMissNoName TikiDan 7 months ago
Friday Nights on METV could use something like your idea.
Like Reply Delete