There is no other like Julie Newmar. She is far more than the first and greatest Catwoman. The California native is a dancer, actress, Tony Award winner, writer, inventor and real estate mogul.

Today, she turns 86 years old. To celebrate the screen icon, here are 13 fascinating facts about Newmar.

1. Her birth name is Julia Newmeyer. 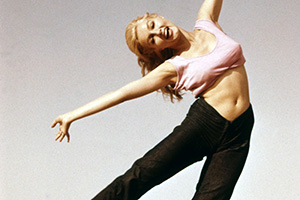 Julia Chalene Newmeyer was born in Los Angeles, one of three children to Don and Helen Newmeyer. She was credited as Julie Newmeyer in her early career, up through the 1954 film Seven Brides for Seven Brothers. Thanks to the career boost, she would change her name shortly thereafter.

2. Her dad was an NFL lineman and her mother was a Ziegfeld Follies girl. 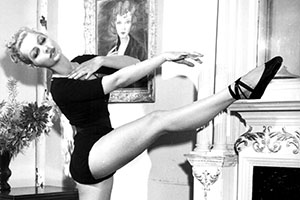 Don Newmeyer played football for the Los Angeles Buccaneers, a traveling squad with a brief lifespan from 1926–27. Mom, meanwhile, was a memorable performer in the Ziegfeld Follies. Eddie Cantor once noted that she had the most beautiful legs in the Follies. Helen later started a real estate business. That's a portrait of her mom hanging on the wall in this photo.

3. She wore little more than scotch tape and gold paint in a Raymond Burr movie.

Long before Goldfinger came along, back in 1953, when she was still known as Newmeyer, Julie was covered in gold paint for the film Serpent of the Nile. She showed off her slinky, graceful dance moves before Raymond Burr, who played Mark Antony. The production had some problem keeping her belly button under control. "Of course in those days, even belly buttons were out, but with that many backbends, swirling, crouching… my real belly button… broke loose," Newmar recalled. "The day was saved with some handy scotch tape."

4. She played Satan on 'The Twilight Zone.' 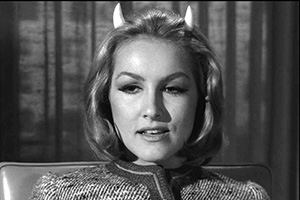 Newmar pops up with devil horns in the lesser-seen fourth season of The Twilight Zone. That was the year of the one-hour episodes. Being the devil, Newmar's character strikes a deal with a businessman that doesn't quite go his way. It was good training for her cat ears.

5. The master tapes of her first sitcom were lost in an earthquake. 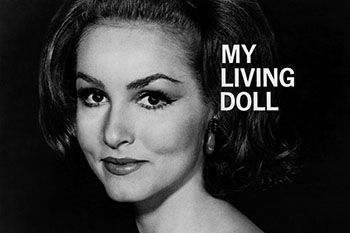 After some memorable appearances on Route 66 and The Twilight Zone, Newmar scored a regular role as a gorgeous robot in the sitcom My Living Doll. The series ran for one season in 1964–65. Three decades later, the 35mm negatives were destroyed in the 1994 Northridge earthquake. In order to put together a DVD release, producers pieced together 11 episodes from 16mm copies found through collectors, according to The Los Angeles Times.

6. Bob Crane almost played opposite her in 'My Living Doll.' 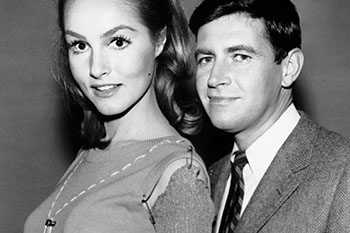 Newmar was charming as the android Rhoda Miller. Part of the show's failure was chalked up to her chemistry with her co-star and love interest, the elder psychiatrist Bob Cummings. Cummings was 23 years older than Newmar. (She is pictured here with Jack Mullaney. He played a neighbor and colleague of Bob's who is smitten with Rhoda.) It could have been much different. Bob Crane, a.k.a. Col. Hogan himself, was first considered for the lead role.

7. She missed out on the Batman movie because of Monsieur Lecoq. 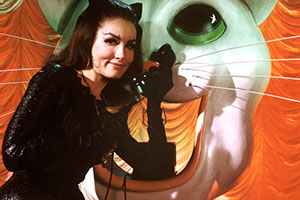 The purr-fect first Catwoman from the Batman television series did not make the jump to the big screen in 1966, as the actress had signed on to another project. The production quickly found a replacement in Lee Meriwether. Unfortunately, Newmar found trouble in her concurrent movie career. She went to the U.K. to film the racy comedy Monsieur Lecoq, which was abandoned and left unfinished. However, stills of Newmar from the production did end up in Playboy in 1969.

8. She supposedly left 'Batman' due to a scheduling conflict. 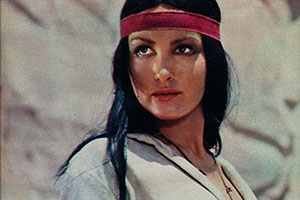 The popular Catwoman actress was replaced by Eartha Kitt in the third and final season. Newmar was locked in to portray an Apache woman in the Western Mackenna's Gold. However, a recent fan theory, supported by evidence from young filmmaker George Lucas, suggests that Newmar might have been free to return as Catwoman. Lucas was documenting the production of the movie for a film student project. It was noted that Burgess Meredith managed to do both Mackenna's Gold and Batman.

9. She lived in the 'Bewitched' house on 'The Monkees.'

Newmar made numerous memorable cameos beyond Batman, appearing on shows such as Star Trek and Get Smart. The four Monkees fell head over heels for the towering beauty in "Monkees Get Out More Dirt," wherein she portrayed a worker at the local laundromat named April Conquest. When the boys head over to Mrs. Conquest's house, you can see from the exterior that it is the home of Samantha and Darrin from Bewitched!

10. She holds a patent for panty hose. 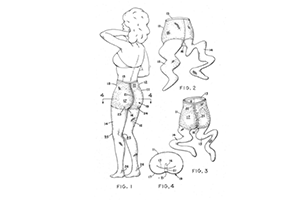 Newmar is an inventor, too! Everyone's favorite Catwoman holds a patent on a form-flattering pantyhose that will "delineate the wearer's derriere in cheeky relief."

Newmar struts and crawls along the catwalk in the 1992 clip for "Too Funky." Newmar holds her own alongside supermodels of the day like Linda Evangelista and Tyra Banks.

12. She had a long feud with her neighbor Jim Belushi — and poked fun at it on TV. 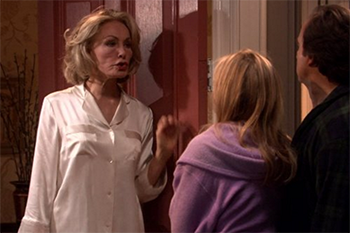 Newmar and next-door neighbor Jim Belushi squabbled for decades over the fence separating their Brentwood, California, homes. Newmar wanted the fence lowered to provide sunlight to her flowers. Belushi wanted a high barrier for privacy. He sued her for $4 million. Tensions seemed to cool off eventually, as Newmar poked fun at the feud in a guest spot on Belushi's sitcom According to Jim, in the episode "The Grumpy Guy." Only this time, the argument was over a dog.

13. She has a cameo in the film 'To Wong Foo, Thanks for Everything, Julie Newmar.' 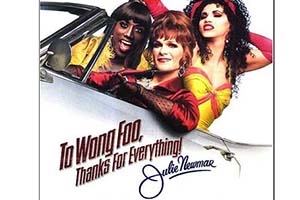 Naturally, Newmar had to make a cameo in the film that featured her own name! The comedy featuring Patrick Swayze and Wesley Snipes in drag was inspired by a photograph writer Douglas Carter Beane spotted in a Manhattan Chinese restaurant. However, there was a backup plan. If Newmar had not signed off on the flick, they were going to call it …Thanks for Everything, Carol Lynly.

nostalgia
Here are five classic Twilight Zone episodes turned into Dr. Seuss stories
Are you sure you want to delete this comment?
Close

9h5kfhek 27 months ago
She was great as Catwoman. Like Yvonne Craig was as Batgirl. The best pat of their "uniforms" were the utility belts that covered their midriffs. What a shocker for the late sixties !
Like Reply Delete

djw1120 33 months ago
I would have loved to have seen her in just body paint - and nothing else.
Like (2) Reply Delete

RobCertSDSCascap 38 months ago
#3- Bare belly buttons in T.V. and movies were practically a felony back then. 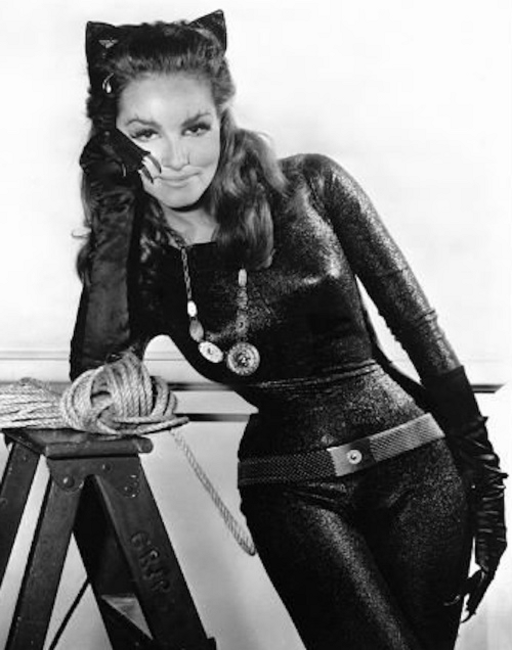 Tresix 39 months ago
Look for the sci-fi western "Oblivion" (not to be confused with the Tom Cruise sci-fi movie of the same title). Newmar plays a bar proprietor named "Miss Kitty" who is a parody of both the same-named character from "Gunsmoke" and Newmar's Catwoman from "Batman".
Like (1) Reply Delete

johnsreginalde Tresix 25 months ago
Besides being a great actress, Julie Newmar was an incredibly beautiful and sexy woman! Her voice was also amazing.
Like Reply Delete

teahlayne 39 months ago
And, she was in the Columbo "Double Shock" episode...
Like Reply Delete

UTZAAKE 40 months ago
5. "After some memorable appearances on Route 66 and The Twilight Zone,..." Julie Newmar was the only Route 66 guest star to appear as the same character in more than one storyline (twice, actually). She played a female counterpart of Tod Stiles (Martin Milner), an heiress who hit the road but with a different mode of transportation - a motorcycle.

CarrieMcCourt UTZAAKE 40 months ago
Bring back Route 66!!!!!
Like Reply Delete

ERROL CarrieMcCourt 40 months ago
I have dvd collection watch whenever. Also, lots! of stars there before they were
Like Reply Delete

I seem to recall even Batman fell for her... That cat suit was really something!
Like Reply Delete

djw1120 AlF 33 months ago
Maybe, but even Batman knew which side of the law she was on.
Of course, her ideas concerning Robin left much to be desired.
Like Reply Delete

jholton30062 40 months ago
I remember Julie in a commercial for Snap-E-Tom tomato juice in the early '60's. She isn't only gorgeous (still), but really intelligent. She has another patent for a bra that she designed. She once said that the biggest compliment a man could ever pay her was that she was funny. She's definitely one of a kind.
Like (2) Reply Delete

Tresix 40 months ago
Quite a few villains from "Batman" appeared on both "Twilight Zone" and "Night Gallery". Cliff Robertson (Shame) was in the "Zone". Victor Buono (King Tut) was on "Night Gallery". David Wayne (Mad Hatter), Roddy McDowall (Bookworm), and John Astin (Riddler) were on both shows. Vincent Price (Egghead), Zsa Zsa Gabor (Minerva), and Cesar Romero (Joker) were on "Night Gallery". However, Burgess Meredith (Penguin) topped them all: he was in FOUR "TZ" episodes and TWO "NG"!
Like (2) Reply Delete