There was so much to choose from, it was hard to whittle down this list! 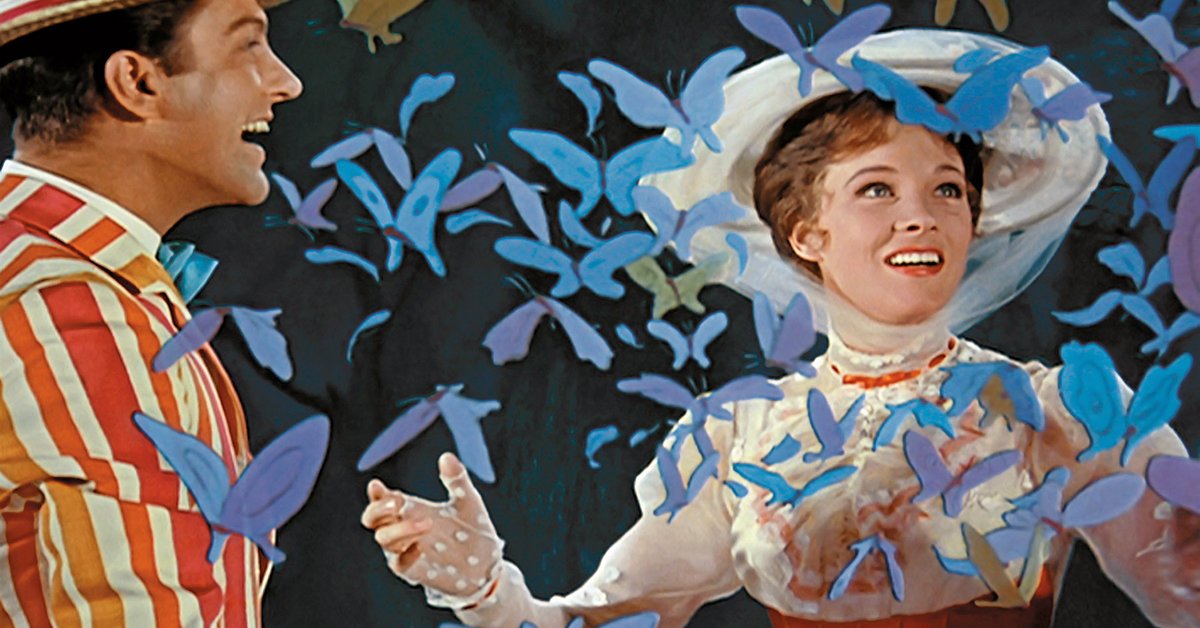 Your votes have spoken! Eking into your top spot for Best Movie of the 1960s is none other than the classic Disney film Mary Poppins. The movie hit theatres in 1964, starring the great Julie Andrews, Dick Van Dyke, and Dan Tomlinson.

The creation of the movie comes with a slew of interesting facts and finds, so we've compiled a brief list of some of the more practically perfect parts of the process for you to enjoy.

Take a look at what we've learned!

1. The movie is based on a children's book series. 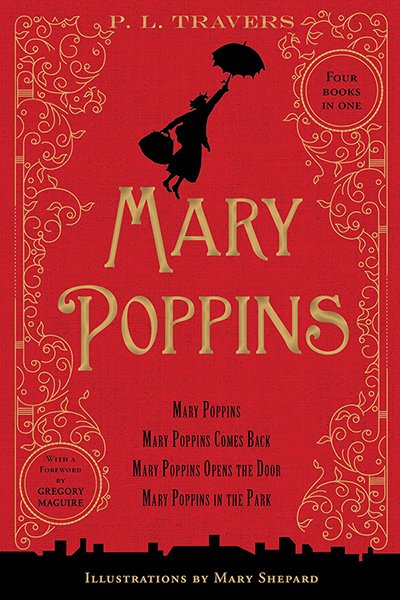 The movie is based on a series of books written by P. L. Travers, an Australian-English writer. Convincing Travers to agree to sell the rights to her book was a 30-year process, as she was very protective of the image and story behind her books. She finally relinquished the rights to Walt Disney in 1961 and was highly involved in the film production the entire time. In the end, Travers has gone on record saying that she was not especially pleased with the overall outcome of the film. 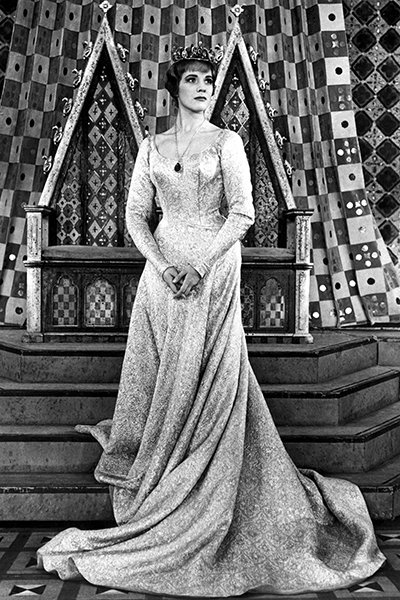 You simply couldn’t imagine the movie being made without Julie Andrews as the leading lady, but back when the film was being made, she actually had quite a bit of competition. Actresses such as Angela Lansbury and Bette Davis were being considered for the role at the time, as well. Andrews solidified her casting after Walt Disney himself witnessed her performance of “What Do the Simple Folks Do” from the Broadway musical Camelot and personally offered her the role backstage. 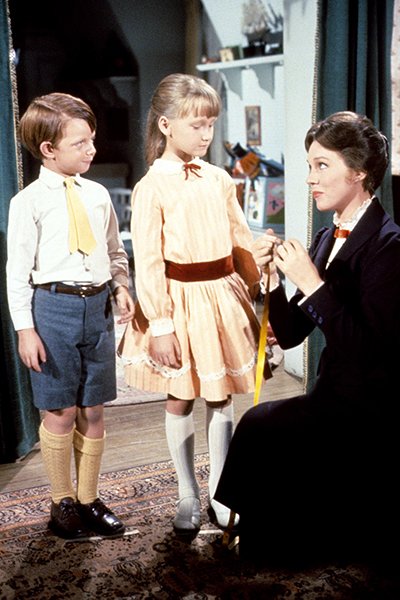 During his visit backstage, Disney also met Andrews’ then-husband, Tony Walton. Upon learning that Walton was costume and set designer, Disney invited Walton to bring a portfolio to California. Upon seeing his work, Walton landed the job as the film’s costume designer.

4. Travers wanted to approve of Andrews' casting herself. 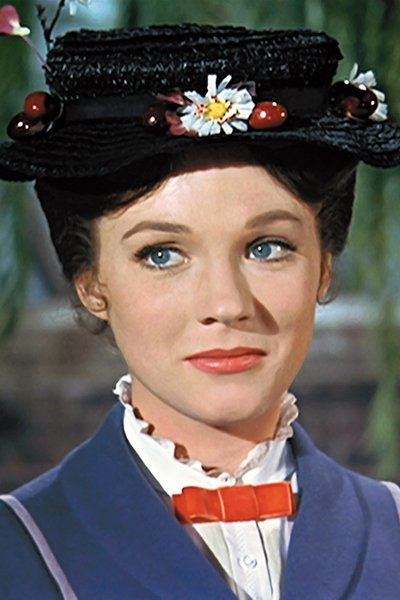 Travers was very concerned about the image of Mary Poppins being too sweet and kind, and upon hearing that Julie Andrews would be playing the role, she insisted on a phone call to suss out the actress. At the time of this phone call, Andrews had just given birth to her first child, Emma. Not 24 hours after her arrival, Andrew received a call from Travers. After discussing having a casual conversation, Travers is said to have given enthusiastic approval of the casting decision.

5. Dick Van Dyke is still haunted by the poor reception of his Cockney accent. 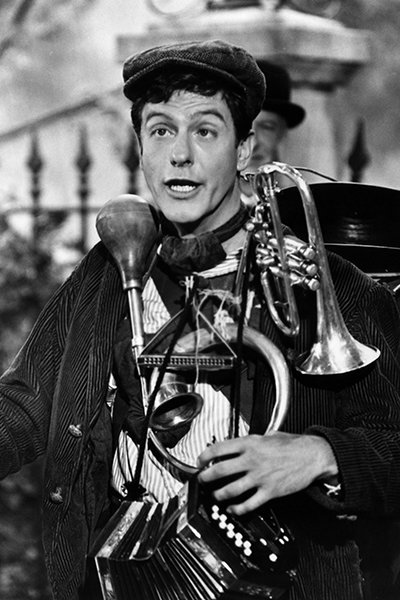 Dick Van Dyke, who plays the lovable chimney sweep Bert in the film, has ne'er lived down the poor reception of his Cockney accent in the film. Van Dyke, who was taking lessons with a voice coach at the time, does not like to discuss the accent because of how people ridiculed him at the time of the film's release. This did not stop the movie from being a huge success, nor did it stop Van Dyke from reappearing in the recent sequel, Mary Poppins Returns.

6. Disney's favorite song from the film was "Feed the Birds." 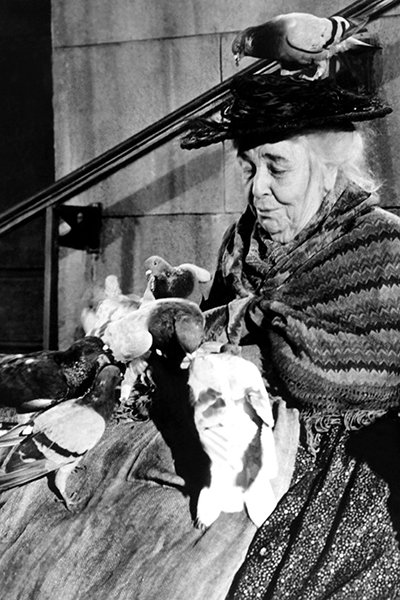 Walt Disney’s favorite song from the movie was “Feed the Birds.” Richard Sherman, one of the composers for the movie, would often receive requests from Disney to hear the song. It was even played at the memorial ceremony held to honor the statue of Disney and Mickey Mouse shaking hands being erected in California.

7. The snow globe that Poppins uses in the movie was almost thrown away. 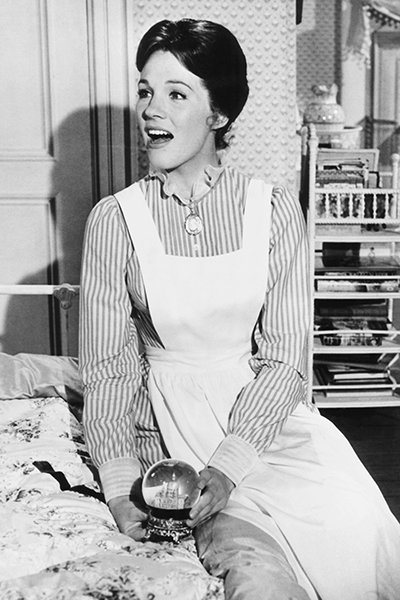 Rumor has it that the props team, with the help of Disney himself, went searching for a snow globe that had bird-shaped confetti inside of it. The one used in the movie was found in, of all places, a janitors office on the lot. When Disney asked him how he came to find such a special item, the janitor revealed that someone had thrown it in their bin to be disposed of. He thought it was too pretty to toss, so he kept it.

8. Ed Wynn was a regular guest on a MeTV programs. 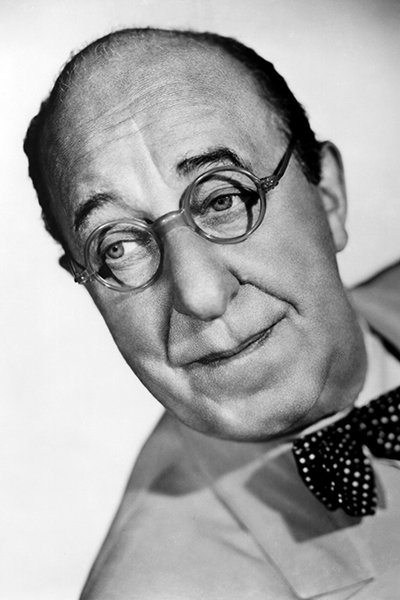 Ed Wynn made an impressionable appearance ad the giggle-ridden Uncle Albery in Mary Poppins. MeTV viewers may recognize him from his work on shows like Wagon Train, Rawhide, The Twilight Zone and Bonanza. Wynn had a bountiful career as Jack-of-all-trades, working as an actor, composer, producer and voice actor.

9. The song "A Spoonful of Sugar" was inspired by the polio vaccine. 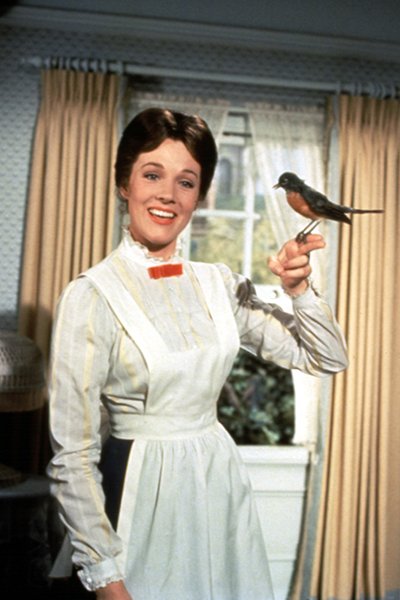 According to Diply.com, when songwriter Robert Sherman came home from work one day, he learned that his kids had received a vaccination for polio — not in the form of a shot, but actually in a sugar cube. And thus the song was born!

10. Andrews was rejected for one starring role only to win a Golden Globe for another. 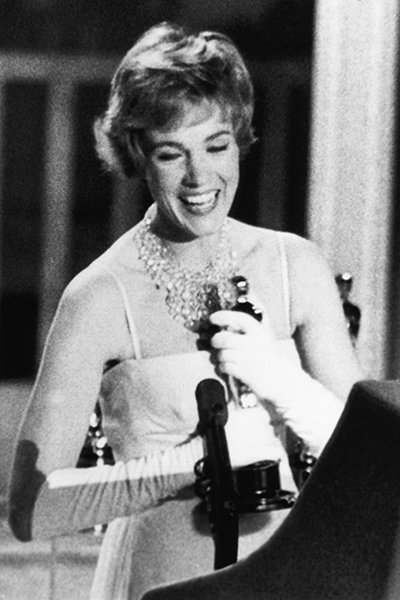 Jack Warner decided to cast Audrey Hepburn in his film adaptation of My Fair Lady, leaving Andrews wide open to accept the role of Mary Poppins. It turns out, this was right move; Andrews went on to win a Golden Globe for her performance as Poppins, competing against Hepburn for the same award. During her speech, she sassily thanked Warner for passing on her and complimented Hepburn on her performance.

11. Mary Poppins was the gateway to Disney's technology studio. 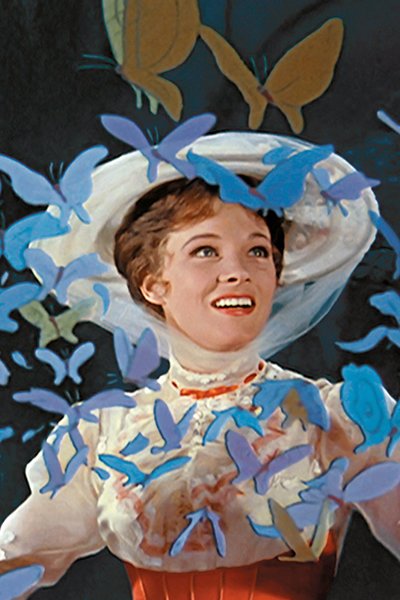 According to an article by Mental Floss, “Without the financial success of the film, Walt wouldn’t have been able to expand his baby, W.E.D. Enterprises, the department that helped create that animatronic robin. In 1965, he made a division of W.E.D. Enterprises just for animatronics, calling it MAPO—Manufacturing and Production Division, but also MAry POppins. MAPO later created animatronics for rides like Pirates of the Caribbean, the Enchanted Tiki Room, Great Moments with Mr. Lincoln, and more. W.E.D. (that's Walter Elias Disney, by the way) Enterprises was later renamed ‘Imagineering.’” 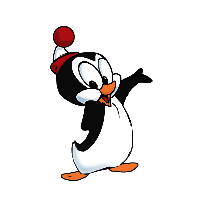 ChillyWilly 27 months ago
I really like Dick Van Dyke's accent in the movie. I couldn't imagine it any other way.
Like Reply Delete

DaveBunzel 29 months ago
I usually just comment on how often you get things wrong in quizzes, but good lord, do any of you people have any care for your work?!

2) Andrews solidified her casting before Walt went to see her on Broadway. Prior to that, Disney, the Sherman Brothers and screenwriter Don DaGradi all saw Andrews perform "What do the Simple Folk Do?" on The Ed Sullivan Show and they immediately knew she was the only one for the part (see the Mary Poppins DVD bonus features from their mid-2000s release for more details).

11) This is all bull. Maybe the movie helped expand W.E.D., but it certainly wasn't the launching point for all that you say. Quite simply the Tiki Room opened in 1963 and Great Moments with Mr. Lincoln first opened at the 1964 World's Fair in April and Disney was filmed for the Disneyland 10th Anniversary Special in 1964, showing much of what had already been created for Pirates. Likewise, It's a Small World, the dinosaur panorama and the Carousel of Progress all debuted at the same World Fair and were in production long before MaPo's formation in 1965 and it's creation had nothing to do with these attractions being created as you seem to suggest.

I won't mention where you fall woefully short of adding pizzazz to some things, for instance how much Walt is believed to truly have loved "Feed the Birds." Why go there when you have enough trouble with the basics?
Like (1) Reply Delete

Pacificsun 29 months ago
Very interesting facts, MeTV ... thank you!
The Mary Poppins' movie was always a little too sweet for my taste causing serious toothaches. However it is to be appreciated as part of cinematography's legacy!
Although the "value" (recognition) awarded by either "the Academy" or "the Golden Globes" is now considered equally worthy, not so much in the beginning. It was therefore gracious of Julie Andrews to acknowledge Audrey Hepburn's work (and well deserved performances), while Julie Andrews' emerging reputation was a benefit from newly established publicity!!
Like Reply Delete

UnicornPrincess 29 months ago
#9 is the most interesting.
Like Reply Delete

SheriHeffner 29 months ago
Feed The Birds is also my favorite song.
Like Reply Delete

Utzaake 29 months ago
2. Angela Lansbury and Bette Davis? The former had just played the sinister and conniving Eleanor Iselin in The Manchurian Candidate, the latter looked way too intimidating.
Like Reply Delete

JDnHuntsvilleAL 29 months ago
"Andrews went on to win a Golden Globe for her performance as Poppins, "

Really? MeTV is going to mention the Golden Globes and not a word about the Oscars?

I think we're all glad Julie did Mary Poppins, but I've no doubt she would have won the Oscar for My Fair Lady, too.
Like (1) Reply Delete

Pacificsun JDnHuntsvilleAL 29 months ago
In that movie, yes. Remember the Academy Awards was not always a fairly "objective" contrivance (meaning a viewers would ascribe popularity). But was based (in part) on actively campaigning nominations, a bit of politics, and (no doubt) studio influence. That those vehicles were even nominated, can be considered noteworthy distinction. And a wonderful footnote in their history!!
Like Reply Delete

MrsPhilHarris 29 months ago
This movie won? I don't even remember seeing it in round one. For the first few days anyways.
Like Reply Delete

JDnHuntsvilleAL MrsPhilHarris 29 months ago
Won what? What are you referring to?
Like Reply Delete

MrsPhilHarris JDnHuntsvilleAL 29 months ago
The MeTV quiz where we said what was or fav 60s tv show, 60s movie & 60s song.
Like Reply Delete

ELEANOR 29 months ago
Nowadays, just mention the name of Dick Van Dyke to anyone in the United Kingdom and to the person, they will automatically denigrate his cockney accent.
Like (1) Reply Delete

SheriHeffner ELEANOR 29 months ago
I really wasn't crazy about his accent in Chitty Chitty Bang Bang either.
Like (1) Reply Delete

UnicornPrincess SheriHeffner 29 months ago
In the Honest Trailer for Mary Poppins, they called Chim-Chiminny 'The "What is Dick Van Dyke Even Saying?" Song'
But I love this movie. The sequel was okay, but nothing compared to the original.
Like Reply Delete