11 once popular toothpastes you probably forgot about

Four out of five dentists recommend you read this article. 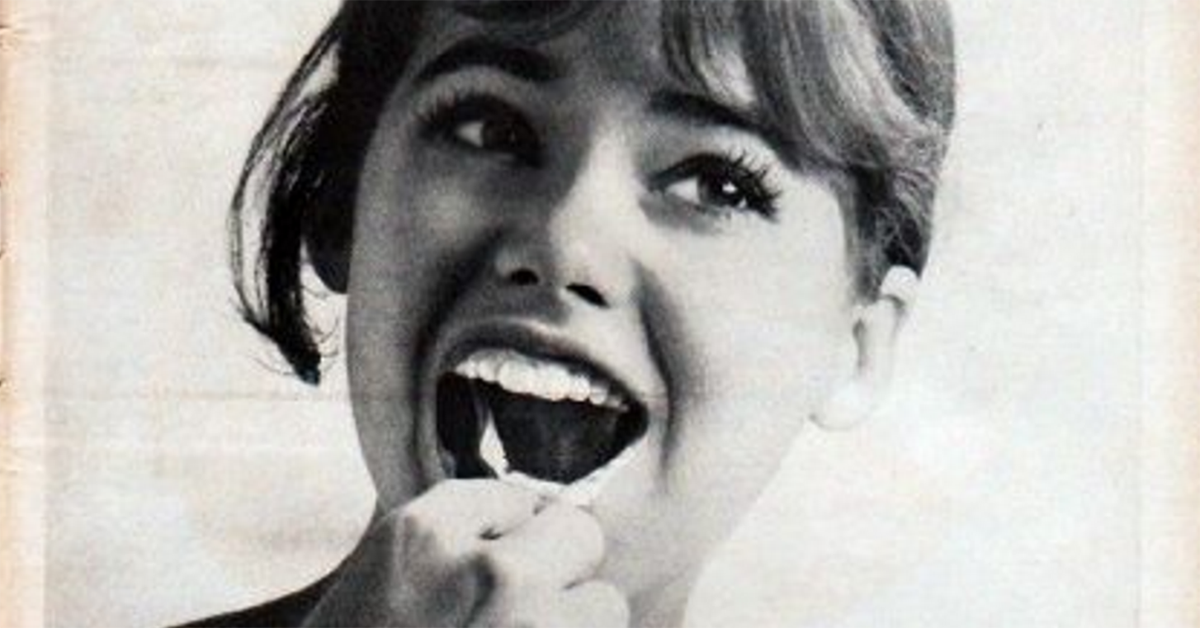 Some brands last for decades, some brands fade like a breath mint. We have already taken a peek into the bathrooms of the past with our list of forgotten shampoos, now let's open the medicine cabinet to peek at how people cleaned their pearly whites.

These toothpastes date from the 1950s to 1980s. Some of them involved famous cartoon actors and packaging gimmicks.

Did you use any of these minty fresh brands? 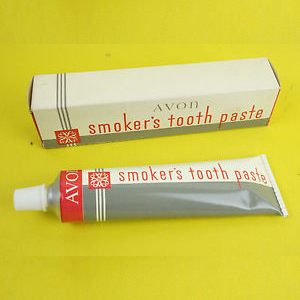 Perhaps ashy gray was not the best packaging color? 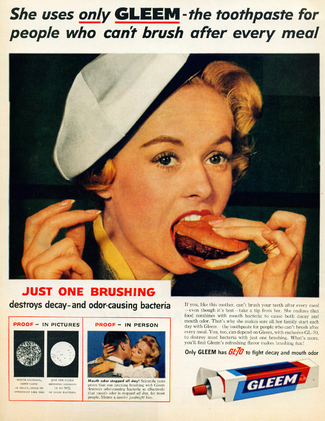 Gleem went after the busy set, claiming it was the toothpaste of "people who can't brush after every meal." In 1963 a group called the League Against Obnoxious TV Commercials formed and in May put a Gleem ad on its 10 worst list. It's hard to see what they hated so much from Gleem commercials of the era, but we're guessing it was the boys not listening to their mothers. 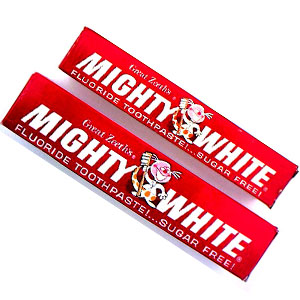 The voice of "Mighty Zeeth" was none other than Mel Blanc! He was far more than the Looney Tunes characters. 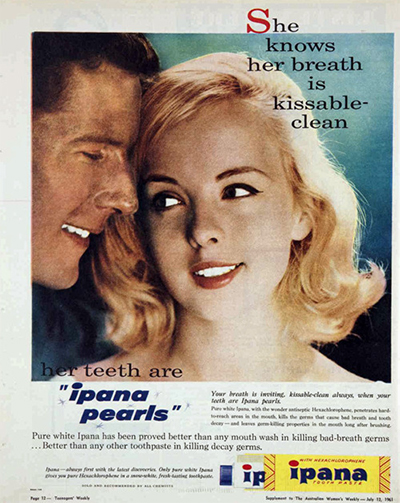 Bucky Beaver was the adorable mascot of Ipana. Beat poet Allen Ginsberg once worked on the "brusha brusha brusha" ad campaign and its jingle was sung in Grease. 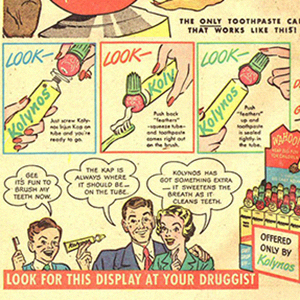 With a name evocative of a Greek isle, Kolynos was massive in pre-war U.S.A. It's even mentioned in Catcher in the Rye: "There was this empty box of Kolynos toothpaste outside Leahy and Hoffman's door…" They went after the kiddies with strange caps that looks like heads, sort of like the Pez of toothpastes, if you will. 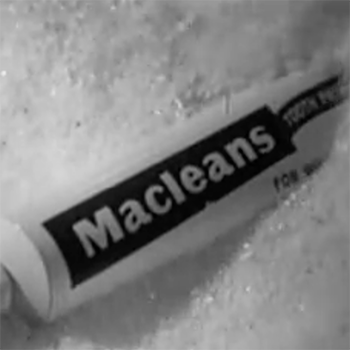 While far more popular in the U.K. and Australia, Beecham's Macleans managed to capture some of the market (briefly becoming the fourth most popular brand) in the States during the cosmetic toothpaste boom of the mid-'60s. 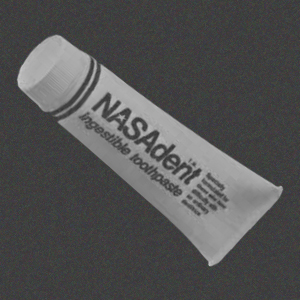 Space toothpaste! Up in space, astronauts can not spit, so scientists developed this foamless "ingestible toothpaste." It was put on the commercial market as NASAdent in the early 1980s. 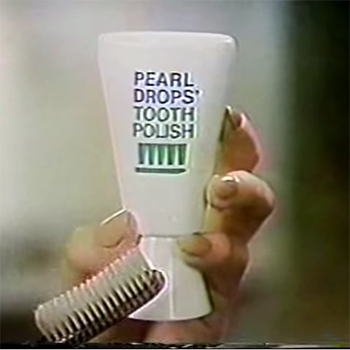 Something about Pearl Drops just seems so '70s and '80s. Perhaps because it gave your enamel the bling of a disco ball or neon light. 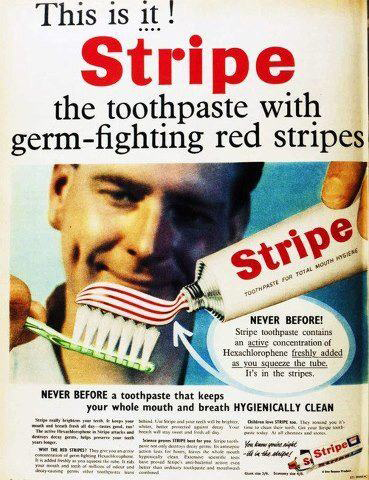 Before there was Aquafresh, there was Stripe, the nifty striated paste that came out of the tube looking like a candy mint. Kids loved the stuff, and not just because of the free "rocket balloon" that once came with it.

Image: Oh What a Time 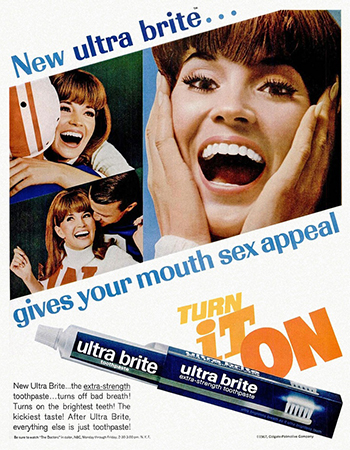 Launched in 1967, this Colgate brand was aimed at the mouths of Boomer teens. It's still on the market today, though no longer goes after the kiss-crazy youth crowd. 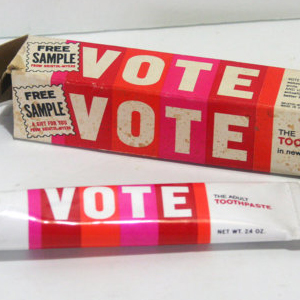 Perhaps this was meant to instill civic pride? Or maybe it was branded for those ever smiling politicians. The packaging did read "The Adult Toothpaste." We wonder if one needed I.D. to purchase.

tph24 2 months ago
I remember ultra bright commercials were always on American Bandstand, as was Pearl Drops. I can not find Pearl Drops in any store... Wish I could that really worked well.
Like Reply Delete

seengodinyou 16 months ago
I used Mentadent as a child. It's still around, but very hard to get ahold of. It was my favorite.

Ray 30 months ago
How about PEAK Toothpaste with baking soda? This was around during the mid 70s.
Like Reply Delete

Nightshade1972 Ray 16 months ago
Arm & Hammer came out with a line of baking soda toothpaste sometime in (I think) the late 80s/early 90s. Dunno if the toothpaste is still around.
Like Reply Delete

idkwut2use 31 months ago
I only know Ipana thanks to Grease. xD
Like Reply Delete

packrat1 37 months ago
Pearl Drops is a British brand. You can get it on amazon.com like I do or pick up at a UK store or website. I'll never give up my Pearl Drops.
Like (1) Reply Delete

JanicePavliskoRobinson packrat1 18 months ago
Well, I don't know about nowadays, since I have never looked for Pearl Drops myself, but back in the 1970s my mother always used Pearl Drops. It wasn't hard to find in the USA back then, in the regular old grocery store.
Like Reply Delete