Where To Watch Shop Store Contact
Home / Stories / This is how M*A*S*H got that pool ball in George Wendt's mouth
Did you know?

The same year Cheers debuted, we saw Norm in an abnormal predicament in the 4077th. 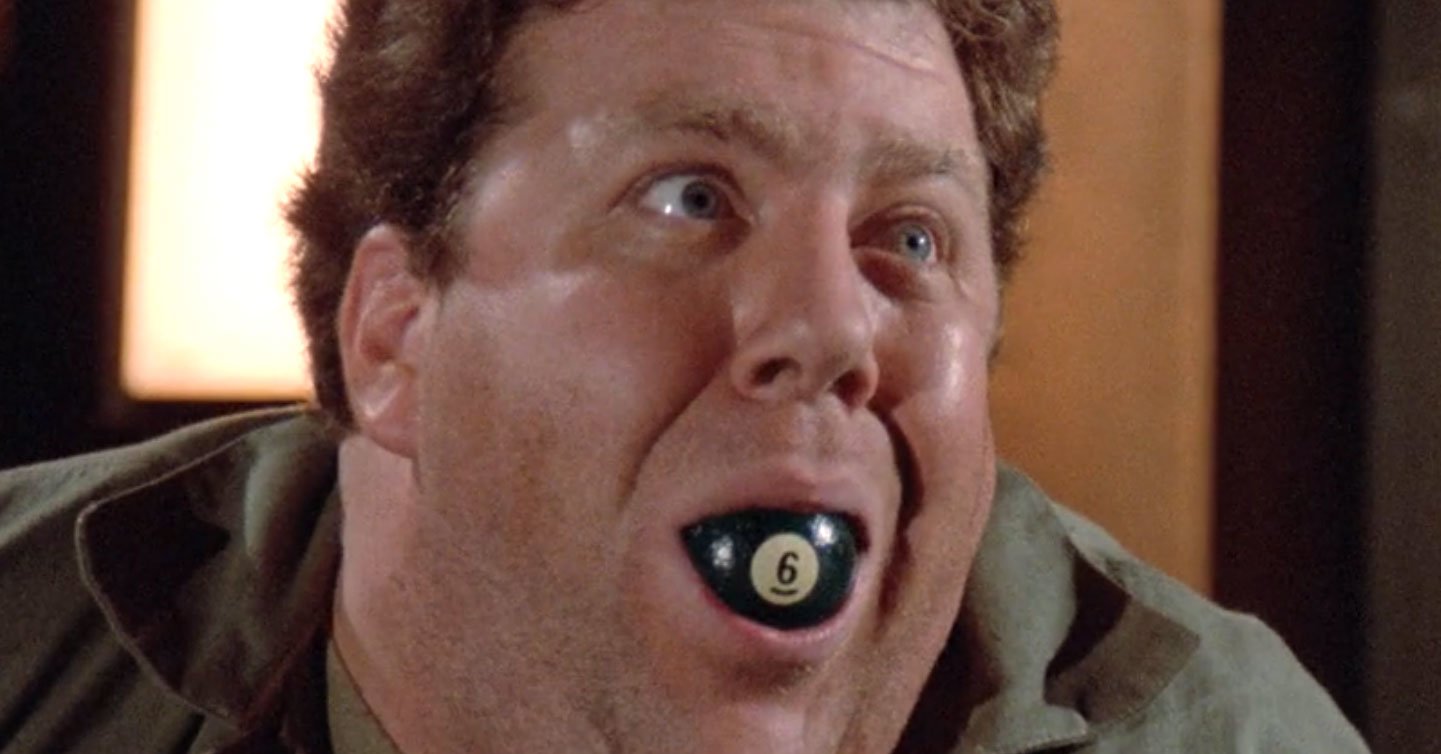 "I don't believe it," Charles Winchester III says in a memorable M*A*S*H scene. "A pool ball? In the mouth?"

The episode is called "Trick or Treatment" and it's a Halloween episode that aired in the show's final season. In this moment, Winchester is being asked to help extract a pool ball from a soldier's mouth, and though Winchester protests to wasting his time as a doctor on such foolishness, he does dutifully go to look after the soldier.

Cut to a closeup of the soldier with the six ball stuffed in his mouth.

He was played by George Wendt, who just two months earlier had become known to audiences as Norm on the Eighties sitcom Cheers. But in this M*A*S*H moment, he is not perched on a barstool spouting his famous "Normisms," but seated on a gurney as Winchester's patient, his words garbled by the pool ball shoved in his mouth. In an interview with bullz-eye.com, Wendt revealed how he pulled off this funny M*A*S*H stunt.

"It was rubber," Wendt explained. "And they just squished it into my mouth and then it popped into normal size once it was in."

For a lot of TV fans, this M*A*S*H moment is one of their earliest memories of Wendt as a comedic actor, but Cheers co-creator James Burrows points to an even earlier TV appearance you may recall.

A year before Cheers premiered and his M*A*S*H episode aired, Wendt appeared as an exterminator in an episode of Taxi called "Latka the Playboy." Burrows directed that episode and in an interview with the Archive for American Television says it's actually what led to Wendt getting cast on Cheers in the first place. 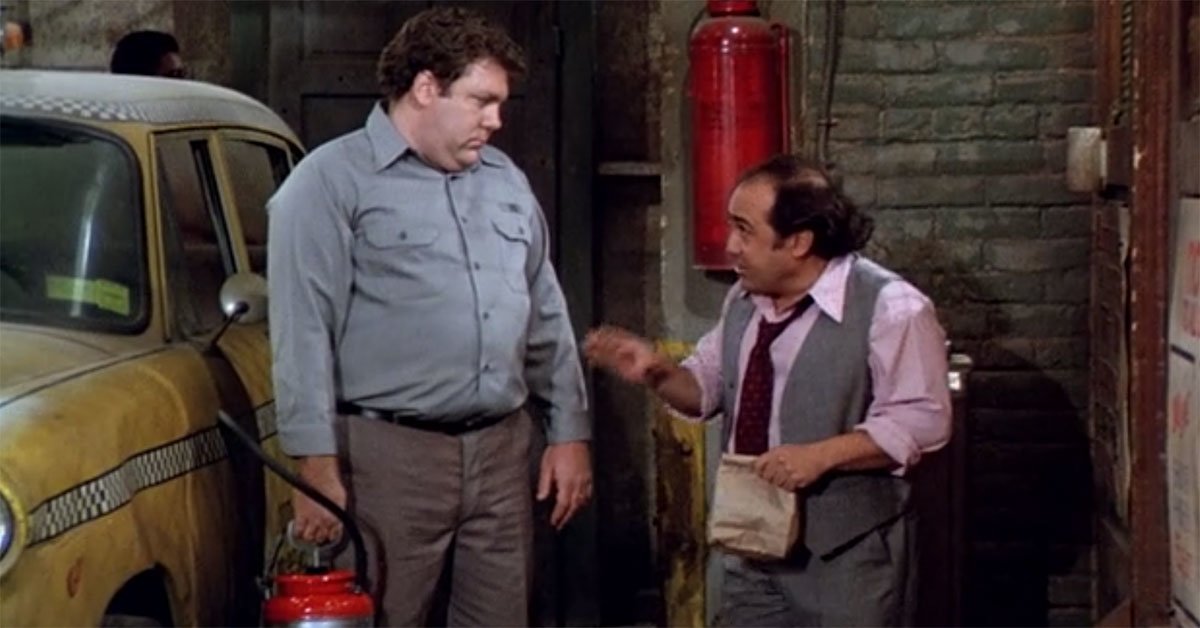 "Well that was a no-brainer," Burrows said. "We said, 'There's one person for this role.'"

Wendt was such a shoe-in that they originally named the character George, not Norm. But Burrows asked the writers to change it because of an experience he had on yet another legendary sitcom.

On The Mary Tyler Moore Show, Burrows said that having Ted Knight play a character also named Ted created more confusion than you might expect. Not wanting to repeat history, he asked the writers to named Wendt's character anything but George.

"So he became Norm," Burrows said.

Although Wendt undoubtedly is best known as Norm still today, many M*A*S*H fans cite his one guest appearance on the military show as one of the funniest scenes in its history. But how many do you think attempted Wendt’s daring party trick? Well, now you know how it was really done — so don't try this at home! 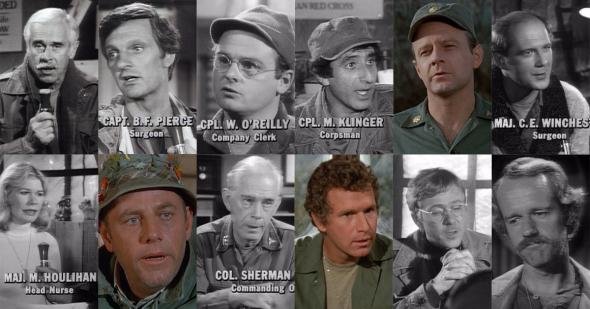 Did you know?
This is the only M*A*S*H episode to feature every major character from the show

RonaldFelder 23 months ago
i figured out how they did even without reading the article. i'm no genius but it was rather obvious and the only way

rycki1138 24 months ago
Just five months before Cheers premiered George Wendt did an episode of Alice where he played a character that Mel and the waitresses knew from their vacation to Las Vegas. In the episode his name was Monty and even though they all knew him none of them could remember his name. They kept calling him other "M" names. I thought it was a funny contrast from his upcoming role where "everybody knows his name" on Cheers.
Like Reply Delete

MadMadMadWorld 24 months ago
That revealing piece was marvelous! I did not know how that gag (pun!) was done when I first saw it on M*A*S*H, but obviously, it couldn't be a real pool ball as they could never have gotten into Wendt's mouth--unless he had a REALLY BIG mouth! Good job, MeTV, in continuing to reveal the methods and inventiveness behind some of the best gags in tv history!
Like Reply Delete

madmark1 24 months ago
I can’t believe somebody hasn’t got on YouTube or TicTok to try this stunt. I remember that particular episode of MASH.This is when George Wendt was pretty much unknown. But remember folks this was done with a rubber ball so don’t try this at home.
Like Reply Delete

Tony madmark1 8 months ago
Kamala has balls in her mouth all of the time, but they aren't rubber.
Like (1) Reply Delete

F5Twitster 24 months ago
"Wendt was such a shoe-in that they originally named the character George, not Norm."

SHOO-in, as in shooing a fly or cow. Boy, MeTV staff (who apparently are afraid of taking blame for this stuff), you're all about as dumb as...well, Norm.
Like Reply Delete

MadMadMadWorld F5Twitster 24 months ago
I also noticed that. Those homonyms (two words sounding the same but having different spellings and different meanings) are very commonly substituted for the other way, and they should hire an English major to make sure they got the correct spelling and meaning! There's another word I just mentioned that people don't use often enough (i.e., correct), instead of writers always using 'right' "They got the right spelling." 'Correct' should be the correct (!) word used, but you rarely see it any longer!
Like Reply Delete

CouchPotato19 F5Twitster 24 months ago
What do you expect from people who spend a lot of time watching TV shows?
Like Reply Delete

CouchPotato19 F5Twitster 24 months ago
Ummmm. Some ladies can do party tricks with a pool ball............if ya know what I mean. Nudge, nudge wink, wink.
Like Reply Delete

AgingDisgracefully 24 months ago
They told him it was food.
Like (1) Reply Delete

KevinJNewell 24 months ago
That was a very funny scene but George Wendt played a Marine. In fact that was part of the bit. Only a Marine could be dared into sticking a pool ball in his mouth.
Like Reply Delete

WordsmithWorks 24 months ago
One of the "funniest scenes in its history?" Maybe one of the most overacted. Funniest? No.
Like (2) Reply Delete

daDoctah 24 months ago
There was an episode of "Love American Style" that had a similar instance of some ridiculously large object in a guy's mouth. In that one, a man's girlfriend (or maybe his wife) teases him by telling him that his mouth is too small, and he decides to prove her wrong by wrapping his face around a doorknob and getting it stuck. Before they free him, his friend at least manages to remove the knob from the door, or he would have had to play the entire episode on his knees
Like (1) Reply Delete