April 9, 2019, 12:06PM By MeTV Staff
On Now
Spock made his most absurd cameo on The Carol Burnett Show
Up Next:
Share

One of the first times that TV viewers saw Mr. Spock outside the original Star Trek series happened in 1967 on The Carol Burnett Show. In the same week that the Star Trek episode "Friday's Child" first aired, showing serious drama with Spock joining McCoy and Kirk to save a pregnant woman from a Klingon coup, three days later, Mr. Spock became an unexpectedly absurd source of one of The Carol Burnett Show's biggest laughs that week.

The sketch that Star Trek star Leonard Nimoy featured in was a spoof on the sci-fi story The Invisible Man. Carol's version was called "Mrs. Invisible Man," and it saw the variety show's star playing a baby-toting housewife to an invisible husband. The baby in Carol's arms, we're told, "looks just like his father," and by that, Carol means the baby's invisible, too. The entire sketch is a spectacular display of Burnett's singular talents for physical comedy, as she struggles to get the baby a bottle and mimes out interactions with her invisible husband.

As the sketch builds, a deliveryman arrives with a new tonic that Carol tells her husband could cure the baby of its invisibility. "Let me try it first!" the husband insists, and Carol says okay as the bottle hilariously floats away in a display of some impressive special effects for a 1960s stage production. 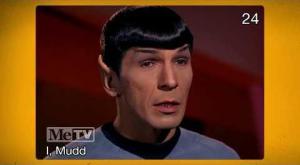 Almost instantly from offscreen, we hear Carol's husband's voice cry out, "It's amazing! It works! Give it to the baby!" And that's when Nimoy makes his surprise entrance, appearing as the physical form of the insivible husband, in his full Enterprise uniform. Without a word, Spock carries an empty glass and heads straight toward Carol, who has her back to him while she's soothing the baby. When at last Carol turns, she embodies the comedic impact of Spock's entrance, with her mouth comically agape as Nimoy gives a raise of his darkly drawn-on eyebrows, the only hint that he's in on the joke. Watch a clip from the sketch at the top of this post now.

The sketch must've stuck with Nimoy over the years, as eight years ago, he shared this photo memory on his official Twitter account:

Meanwhile onscreen, Carol represents all of us as she cracks up while the sketch fades out on the screen, witnessing firsthand the most absurd we ever saw Spock, and it was on a sketch in the first year of her own show. It just goes to show that right from the start, audiences never knew what to expect from The Carol Burnett Show's hilarious twists, except, of course, the utter delight that kept Carol tugging on her ear night after night.

Pacificsun 27 months ago
Not necessarily "Spock" but just last night Leonard Nimoy turned up with the rest of his Mission Impossible crew on the Carol Burnett show. With Flip Wilson guest starring. It was a pretty funny show. But I wish MeTV would've sent us a preview of THAT happening this week. I didn't get to see all of it, or even to tape the show (5/21/20).
Like Reply Delete

Lacey 40 months ago
Amazon is showing the "lost episodes" of the Carol Burnett show including the first appearance fo Tim Conway (with guest Lucille Ball). The ones I have seen so far are early episodes before the show really clicked.
Like Reply Delete

VBartilucci 40 months ago
You don't have this episode, do you? It looks like the Carol Burnett package only includes later seasons.
Like Reply Delete

JohnWilliamson VBartilucci 3 months ago
They aired the full one hour show including Mrs. Invisible Man this evening, April 20 2022. It's nice to see the full one-hour shows rather than the half-hour "best of" bastardizations that left us wanting more.
Like Reply Delete

RonSilvey 40 months ago
So much spam and ads on this site any video is unwatchable. I have full broadband and stream everything. Except this hack shill site
Like Reply Delete

MrsP58 40 months ago
You know how mimes never speak when in make-up? Same here. Leonard Nimoy may have been smiling or laughing on the inside, but Spock did not do so on the outside.
Like Reply Delete

x60hz11 40 months ago
OMG. I've been waiting to see this sketch for sooooo long. Was that the entire sketch or did Leonard speak?
Like Reply Delete

stephaniestavropoulos JoeyZone11 40 months ago
I just got through watching 2 minutes plus of this skit over on You Tube. Right before the start of METV's clip, Aunt Martha {?} and Mrs. Invisible Man were interacting. As Aunt Martha leaves, Mr. I.M. comes home As A.M. is walking out the door, I think he swats her on her backside!
About Leonard Speaking: In the clip I saw, he didn't utter a single word. Unless I misunderstood, the disembodied voice was provided by Lyle Waggoner. When I first heard the voice, I thought it was the voice of Dick Sargent. {Darrin #2 from Bewitched.} Then, right before Mrs. Invisible Man burped the baby, {I think Mr. I.M. said a few words;} and that's when I realized it was LW's voice. So, in a sense, Mr. Invisible Man spoke, but not in the visible/visual sense. LM's lips did not move, nor did they utter a single sound in the clip I saw. I'm not 100% sure what I saw on You Tube, was the entire skit. If it is, then no he didn't speak.
Like Reply Delete

ttenchantr stephaniestavropoulos 40 months ago
Pretty sure it's Harvey Korman as the Invisible Man not Lyle Waggoner.

Pacificsun stephaniestavropoulos 40 months ago
Harvey Korman, yes. If you watch closely LN almost can't hold back an instinctive yet reserved smile. CB had that affect on people. She was so invested in the characters she performed, that she never held anything back. And could make anyone break up, if they wanted to. It's a great clip, because LN is so young, and it's a perfect unpretencious Spock cameo! Thanks MeTV!
Like Reply Delete