Charles Addams swore he didn’t base the house on ANY of them. 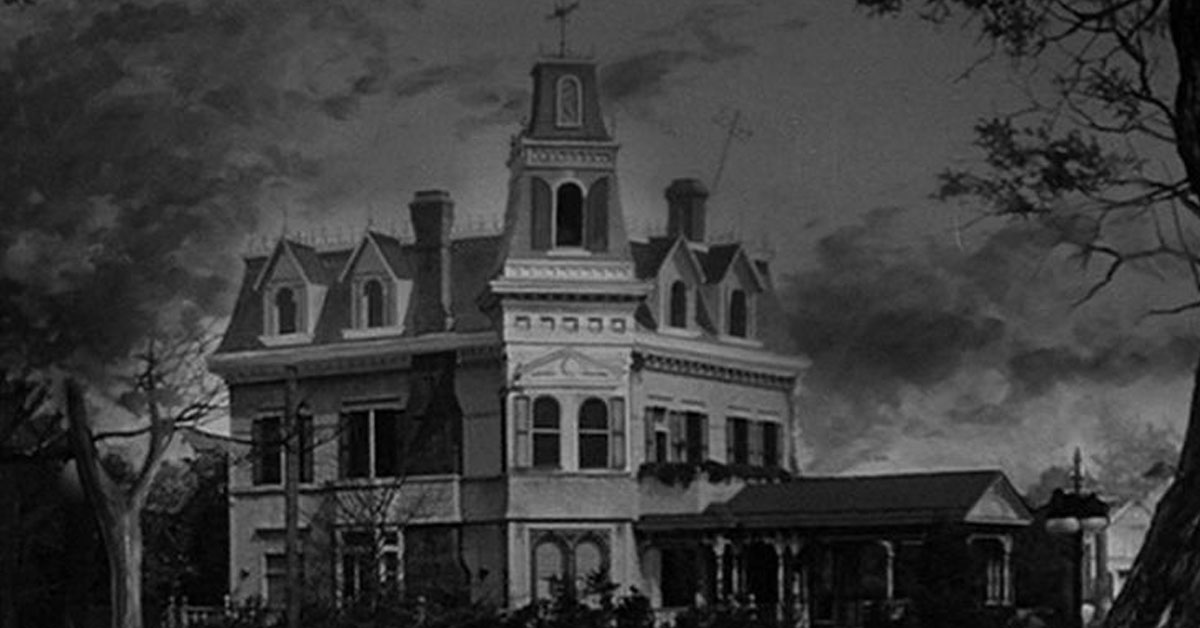 Seeing their home as the most elegant on the market, Gomez tries to raise his property’s value, but every effort he takes only sets the price tag lower.

Frustrated with the incompetent city, Gomez has no choice but to run for mayor so that his beautiful mansion can be valued as the treasure that it is.

Today, the Addams Family mansion is one of the most iconic homes in pop culture, but the TV location where it was filmed has since been demolished.

Its place in our memories has become one of the few ways to revisit the TV home.

But perhaps you’ve found yourself in a small town in America, gazing at a spooky old Victorian mansion and wondering if quite possibly it served as inspiration for The Addams Family mansion?

You wouldn’t be the first person to mistake a dilapidated house for TV history.

But according to Charles Addams, there was no house that inspired the Addams Family mansion.

And yet, that didn’t stop people from falsely claiming their own town’s mansion was the legitimate muse.

In the 2010 book The Addams Family: An Evilution by Charles Addams — posthumously compiled writings by the Addams Family creator— Addams said that many cities claim to be the destination with a mansion that inspired the famous TV family home. He could cite ones he knew of in Key West, Spokane, and Rhinebeck.

One of the most well-known mansions posing as Addams Family history is in Philadelphia.

In 1993, Knight-Ridder News Service reported that the Ebenezer Maxwell Mansion claimed to have inspired the Addams Family mansion, hanging a poster from the TV show in the house and staking its claim.

"Who’s to argue?" wrote the reporter, discussing the 134-year-old mansion with 14 rooms as a serious potential muse. Simply because Addams had graduated from the University of Pennsylvania, they said it "could very well have been inspired by the Maxwell manor."

But while the Philly mansion’s claims seem dubious at best, in Addams’ hometown in New Jersey, neighbors have spent decades debating which house they know Charles Addams knew of that could’ve inspired the Addams Family mansion.

A popular choice is a mansion that joined the property of Charles Addams’ childhood home. 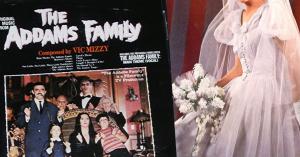 Vic Mizzy got married to The Addams Family theme song

One of Charles’ childhood friends Dick Bouton told Gannett News Service in 1991 that he and Charles used to sneak into the house and draw "ghoulish sketches" on the walls.

"We loved all old houses and we loved that one particularly," Bouton said. "Its architecture was just calculated to appeal to a small boy."

Addams himself spoke of this house, but only as a childhood playground and never as a source of inspiration.

"It was a big old house, probably built in the 1890s and irresistible," Addams said. "And it kind of adjoined my family’s property and was a house I always wanted to investigate and did."

This wasn’t the only old Victorian mansion in town, though, and other neighbors thought that a different house that Addams would’ve passed on his way to high school physically looks more like the Addams Family mansion.

As we noted at the start of this story, Addams has repeatedly said that everyone’s wrong, and no real house exists that inspired the Addams Family mansion.

Instead, Addams took his fascination with old houses from exploring those mansions as a kid and became obsessed with architecture as he got older.

He befriended an editor of The New York Times Home Design and Entertaining section, and she gave him access to an incredible archive of images of home trends spanning decades.

He used these image archives to create the Addams Family mansion of his dreams, including all the glorious detail of the home’s interior. It’s said in Evilution that Addams would spend hours staring at pages and pages of furniture, turrets, windows, grillwork, roofs, all of it inspiring his mansion’s aesthetic appeal. 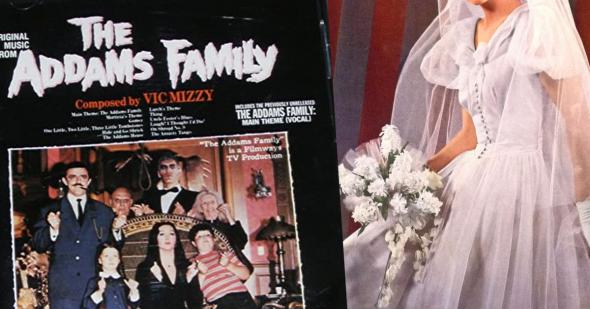 Vic Mizzy got married to The Addams Family theme song 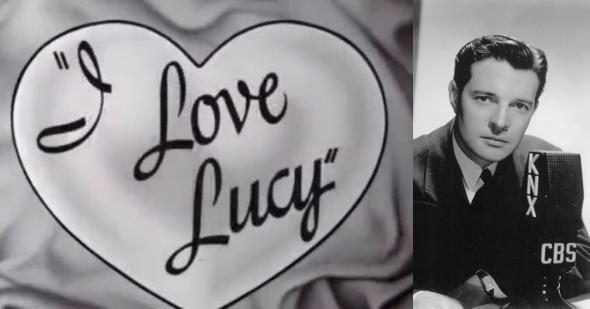 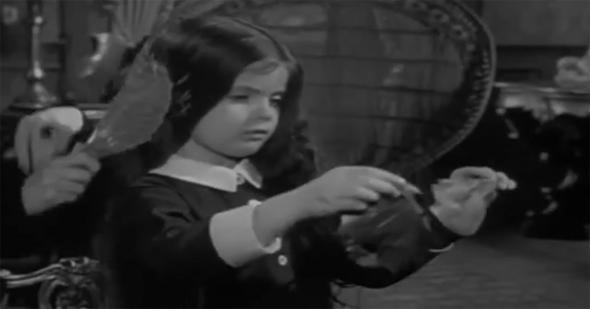 Of course Wednesday Addams played with the oldest stuffed toys in the world
Are you sure you want to delete this comment?
Close

eddiecantorfan 5 months ago
I have a suggestion for METV.
I hope that METV will consider showing Wolfman Mac's Chiller Drive In right after Svengoolie on METV.

LoveMETV22 eddiecantorfan 5 months ago
That's a good suggestion. Although they're currently running "Sventoonie" in that time slot (it is listed as a " LIMITED RUN SERIES".) they may consider it. If it has a Svengoolie feel you could also suggest it to Svengoolie, (although part of MeTv's schedule, Svengoolie maintains their own separate website.) You could use the contact link on either website as that probably gets viewed more readily than suggestions in a story or quiz article.
Like Reply Delete

eddiecantorfan eddiecantorfan 5 months ago
Wolfman Mac's Chiller Drive In
Was a program on RETRO TV
for several years . Wolfman Mac (Real Name Mac Kelly) right now is talking to TV stations across the USA trying
to get Wolfman Mac's Chiller Drive In either in syndication
Or at least have his program
on one channel at least.
There are at least two articles
about Wolfman Mac and a few
articles on RETRO TV Where his Tzb program started.
Wolfman Mac and Svengoolie
Great Horror Hosts. Would be
a winning combination together
Back to Back.
Like Reply Delete

LoveMETV22 eddiecantorfan 5 months ago
MeTV has done a few Sweepstakes between 2013 - 2017:

Nothing since. I think they did them as the network was growing. As they're firmly established now that's probably why you don't see them. You could contact MeTV or use the contact link on the Svengoolie website if you're interested.

LoveMETV22 5 months ago
So It looks like you are going to continue to post active full MeTV, series episodes:

Do as you wish, which it appears you are going to do. I just hope MeTV doesn't have issue with it.
Just a friendly suggestion.
Like Reply Delete

eddiecantorfan 6 months ago
This message is for persons in
Richmond VA and Petersburg VA
who watched Shock Theater with
Host Bowman Body (played by
Bill Bowman).
There are a couple of clips that persons can pull up on their cell phones of Bowman Body.
Also I would like to see a movie called The Munsters Meet The
The Addams Family.

eddiecantorfan 6 months ago
I like the Sunday Comic Strip called
Where's Waldo ? Where readers try
To find Waldo .
I have a suggestion for a Where's
Svengoolie Contest where TV viewers try to find Svengoolie who
Is hiding in one of the 50 states
And the TV Viewer who is the first person to locate Svengoolie wins
a prize from METV!!
Like Reply Delete

Todd 6 months ago
When I was in elementary school, The Addams Family was my favorite show. Not only did it appeal to my lament love of dark humor, and the macabre,) I could easily see H.P. Lovecraft mixing quite while with the Addams family) It on Friday night, the Holiest night of the week for a school kid. Once more, I promised myself if I ever owned my own house, I would decorate just like The Addams Family, complete giant tortoise.
Like Reply Delete

ncadams27 6 months ago
Do you know another Classic TV show that was based on a long running panel comic in a popular weekly national magazine?
Like Reply Delete

denny 6 months ago
I not sure if Source link will work, but if you Google 21 Chester Place you can see the house that inspired AF house for TV show.


n 1964, the house at 21 Chester Place was only actually used for exterior shots during in the very first episode of The Addams Family, and the porte-cochère can be seen in the background of the opening credits when Gomez Addams (played by John Astin) is filing the pointed spikes of the house gates. In reality, the roof and third floor of what we know as the Addams Family house today has little resemblance to the real home at Chester Place. Rather than reuse the exterior shots of the house, producers instead used a bit of Hollywood magic. After dressing up the house with props to help give it more of the desired look, a photo of the exterior was blown up and then painted over to add the additional floors and Victorian style that we know today. When the matte painting was used over stock footage of the 21 Chester Place exterior, it would create the illusion of action outside of the house.

Pacificsun denny 6 months ago
Very cool research and thank you for sharing it! That's what makes these threads as much fun as the stories themselves!!
Like (2) Reply Delete

GWeldon1776 6 months ago
Back in the early 60's to the 80's when I went to the library, I would purposely pick out a copy of the New Yorker magazine just to see Charles Adams humorously macabre cartoons! Loved them before they were ever on television. Also loved and looked for James Thurber cartoons in The New Yorker as well and loved his story The Night The Ghost Got In. What a hoot!
Like (1) Reply Delete

Michael GWeldon1776 6 months ago
Did you watch My World, and Welcome to it?
Like Reply Delete

Moverfan Michael 6 months ago
I did...and I wish I had more than just vague memories of it!
Like Reply Delete

In one of the episodes, Gomez mentions that there is a turret on the house and that the turret is connected to something it shouldn't be connected to. And I remember he says afterwards that every good home should have one and he's talking about the turret. The meaning behind this line is that this house is architecturally impossible and shouldn't exist and it's a running joke in the show too because different members of the family are always saying "Why? What's wrong with the house?" when they have visitors who've never seen the house before over. The mansion is a hodge podge of different architectural designs.

Charles Addams may have drawn inspiration from those two houses in New Jersey as well because all writers tend to draw on inspiration for stories from past experiences in their lives. But then he added all types of stuff in there so nobody could say it's any one house. He made it original and not a copy of something and that's why the house is so beautiful ❤️💖🖖!
Like (2) Reply Delete

Pacificsun JohnAustin779 6 months ago
And the reason why as a cartoonist he was so gifted!