Where To Watch Shop Store Contact
Home / Stories / Pop Flashback: These were the top ten hits this week in 1968

Pop Flashback: These were the top ten hits this week in 1968 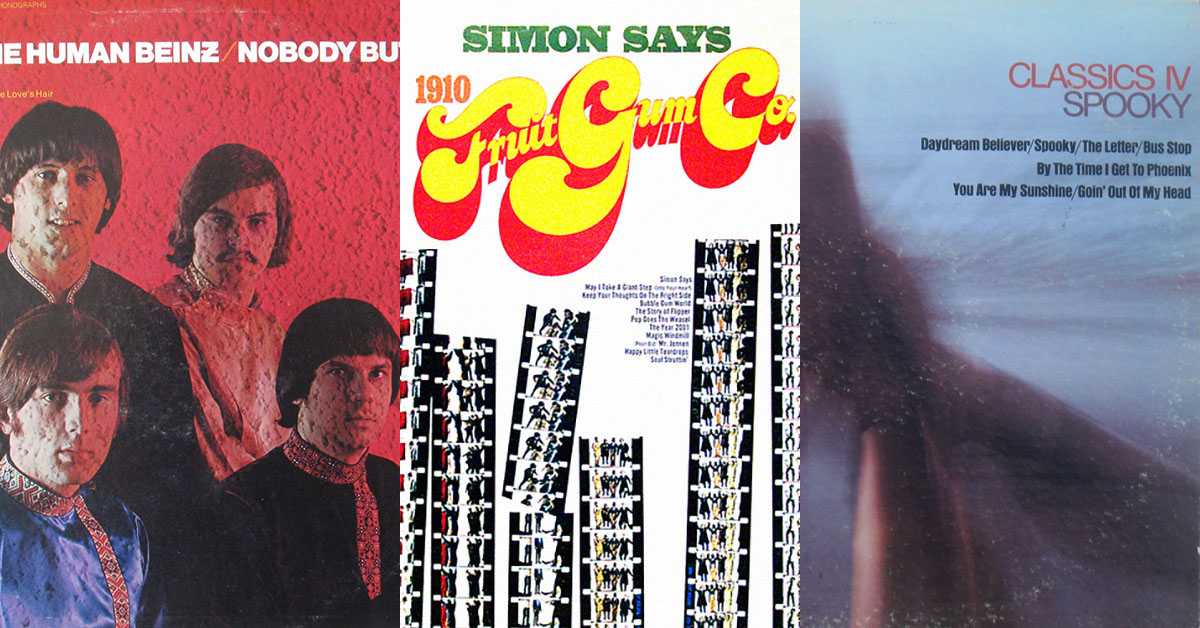 Perhaps it was the Leap Day, but there were some unlikely names sitting atop the Billboard Hot 100 charts at the close of February 1968. Sure, you have your immortal classic by Otis Redding, "(Sittin' On) The Dock of the Bay," but it was outsold by the only French act to ever reach number one.

It was also the peak of bubblegum, with a songwriting team behind the Monkees scoring a hit of its own and, well, the Fruitgum Company singing a fun little ditty.

Let's take a spin through the sock hop smashes and romantic ballads of early '68.

The Ohio quartet originally called itself the Human Beingz, but Capitol accidentally left the "g" off their first single. The record label promised to correct the spelling error if the record flopped. Alas, this dance number would instead be the band's only hit, and the Beingz would be Beinz forever.

9. The Letterman "Going Out of my Head / Can't Take My Eyes off You"

"You're just to good to be true"

The vocal trio was the sound of young love, landing a string of hits throughout the decade. This mash-up medley was first released on the group's live album of 1967 and would close its subsequent Goin' Out of My Head.

Boyce and Hart were the songwriting aces behind a handful of early Monkees jams, most importantly "(Theme From) The Monkees" and "Last Train to Clarksville." Not content to stay in the background, the duo cut some jangle-pop gems of its own.

With "Lemon" and "Green" in the name and title, this Ohio act (Ohio was hot that week) turned psychedelic rock into colorful candy.

"Put your hands on your hips, let your back bone slip"

With its "Wooly Bully" beat and Ba-Ba-Ba's, "Simon Says" was engineered to stick in your head like a pink wad of Bazooka. This is bubblegum in its purest form.

"I left my home in Georgia / Headed for the Frisco Bay"

Two months earlier, Redding had shockingly perished in a plane crash. It was a crushing loss for music, but at least he left us with this.

4. The Temptations "I Wish It Would Rain"

The classic lineup of the soul quintet — David Ruffin, Eddie Kendricks, Paul Williams, Melvin Franklin and Otis Williams — released its final album together in 1968, and this title cut with a cutting lead vocal from David Ruffin goes out on a melancholy high.

The Jacksonville combo originally recorded "Spooky" as an instrumental, months later adding the lyrics about a "spooky little girl." It was a cool, nocturnal groove with touches of jazz.

2. Dionne Warwick "(Theme From) Valley of the Dolls"

"When did I stop feeling sure, feeling safe"

Judy Garland was meant to sing the movie theme to the adaptation of Jacqueline Susann's sensational novel, but the actress was fired from the film. Barbara Perkins, the lead in Dolls, suggested Warwick for the singing gig. Bravo, Barbara.

This lush and sweeping instrumental would be the only number one hit by a French artist to top the Billboard Top 100. Daft Punk's "Get Lucky" nearly matched it, climbing to number two in the summer of 2013.