The king of M*A*S*H's best recurring joke helped launch one on the '60s show, too. 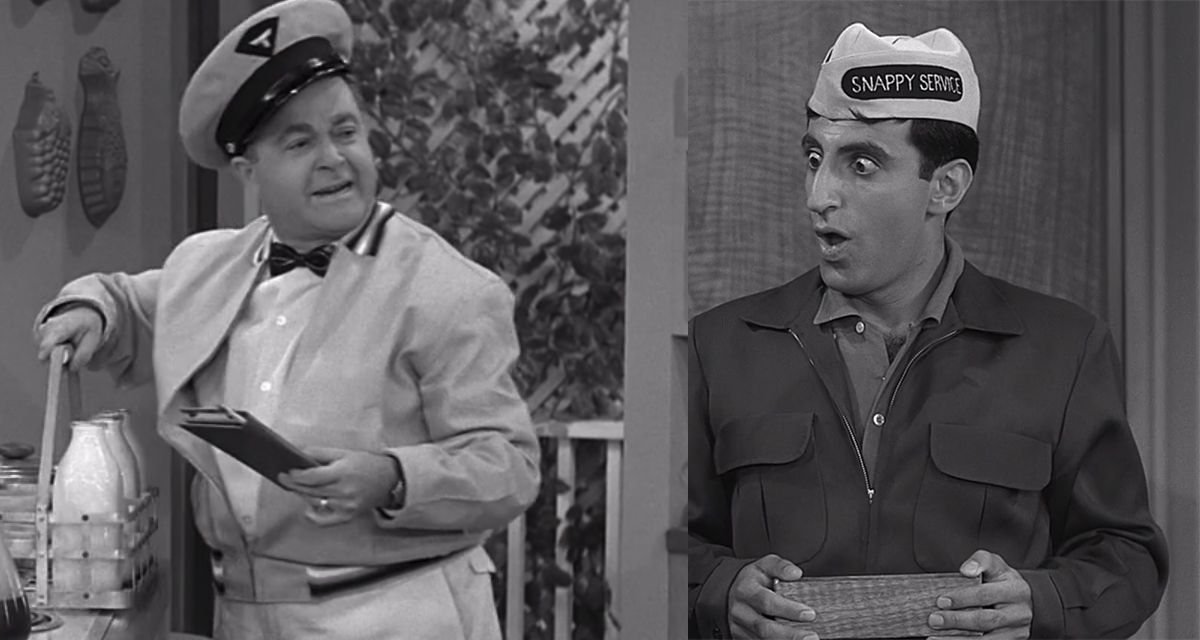 As one of the first delivery men on the show, Farr helped launch a recurring joke that kept audiences chuckling across the show's run, where just about everybody Rob comes in contact with has an opinion on The Alan Brady Show that Rob writes for. When Farr weighs in unasked, Rob cracks a joke, lighthearted as ever, but Farr's bemused retort gets arguably the bigger laugh: “Why don’t you put jokes like that in your show, instead of that junk?”

As the Snappy Service delivery man, Farr appeared in four episodes of The Dick Van Dyke Show's first season. After that, Farr's delivery boy disappeared from the show. In an interview with Archive of American Television, Farr explained how he got cast on the show and, ultimately, his theory on why he only made it into four episodes.

To start this story, Farr begins at the beginning, when he was an actor starting out, living part to part, perfectly willing to accept a $300/week gig to keep food in the fridge while he was still dating his soon-to-be wife Joy Ann Richards. Farr explained it was a point where he felt "really desperate" and "running out of unemployment," so he did something slightly out of character: He went down the studios where Danny Thomas' company was and he stuck his neck out to try and get noticed.

Luckily, unlike all of Klinger's unsuccessful plots on Farr's eventual hit show M*A*S*H, his desperate scheme worked. Farr said, "I went to the studios where Danny Thomas’s company was and Carl Reiner was there and he was just going to do this Dick Van Dyke Show. I didn’t even know who Dick Van Dyke was, because he had come from New York, from Broadway, and he wasn’t famous at that time. So he said, 'hey, there’s this part of this Snappy Service, he’s a deli guy. He’s got four or five lines in it. Would you mind reading for it?' So, I read for it, and I got the part.”

At that point, Farr said he thought everything was finally working out for him. He introduced Joy to the star of the show, and it turned out both Dick Van Dyke and his wife were from the same small town, Danville, Illinois. Farr said, "Joy and Dick met and they had great fun reminiscing about the city and so forth. So I did [a few of] those shows and I thought, here I go, zooming to the top.”

Farr goes on to explain in the interview how the business back then (and likely still today) operated a lot by who you knew, so he saw his wife and his show's star hitting it off and expected he was in. However, there was another actor who had fallen on just as hard times as Farr had, and he apparently had a few more friends on the show than Farr did.

Farr said, "Well, what had happened is somebody higher up decided they wanted another actor to come in and play the role. In our business, if you’ve been in it for enough time, you make friends, and apparently there was an actor who they all knew was out of work and needed the job. So they said goodbye to Jamie Farr in Snappy Service and they brought in this other actor."

Looking back at the show's history, it's likely the actor Farr indicated in his interview is Jerry Hausner, who appeared six times on The Dick Van Dyke Show, often as delivery men and all after Farr had departed from the show. Picking up where Farr let off, Hausner also shared funny opinions on Rob Petrie's work as a laundry delivery man, a stage manager, and even once delivered milk to Rob's home.

Throughout the interview, Farr laughs off the experience as just the way the business goes, with no hard feelings on how things worked out in the end, even though his part turned out to be just a bit more "snappy" than he would've hoped.

ELEANOR 39 months ago
Being ditched on DVD apparently didn't hurt Jamie at all in the long run. Sometimes a little adversity gives the career a shot in the arm.
Like Reply Delete

MichaelThomasMooney 40 months ago
Your photo and assumption that it was Jerry Hausner who replaced Farr as the delivery man is incorrect. Hausner was the milkman at home, not the Snappy Service man. Farr was probably replaced by Herbie Faye. Hausner famously feuded with Desi Arnaz and left "I Love Lucy" although the two patched things up personally. Lucille Ball hired all of these actors on "The Lucy Show" including Farr.
Like Reply Delete

Wiseguy MichaelThomasMooney 39 months ago
I've always heard that he was replaced by Frank Adamo, Dick Van Dyke's friend and stand-in. Since he was already on the set standing in for Van Dyke during lighting tests, etc. he got to do many small parts and a few larger parts in 50 episodes during the course of the series.
Like Reply Delete