Where To Watch Shop Store Contact
Home / Stories / The Flintstones' pet cat from the closing credits rarely shows up in the actual episodes
Did you know?

The cat's most memorable role came in the show's end credits. 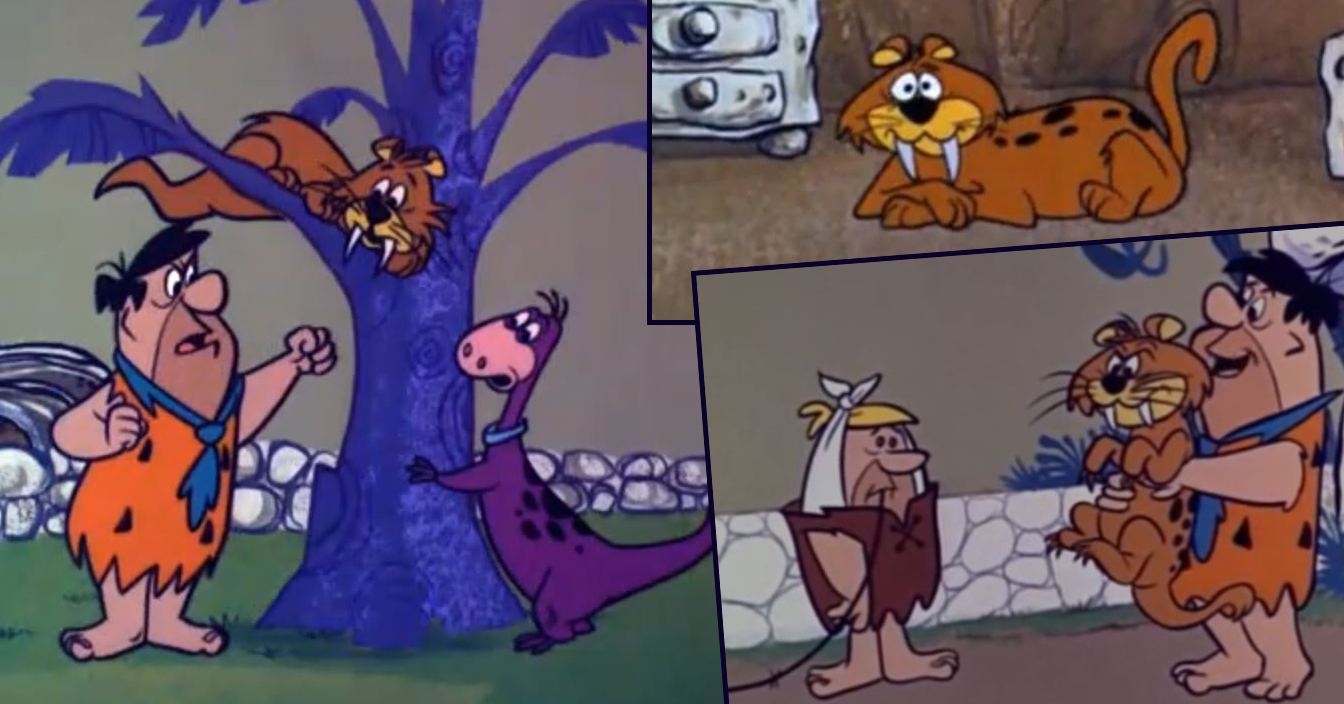 It's a memorable moment from the closing credits of The Flintstones, part of the show's enduring legacy. You likely recall this comedy bit at the end of episodes. Fred Flintstone puts two empty milk bottles (in later episodes, it's just one empty bottle) outside the front door… then returns carrying the saber-toothed cat that served as the family's lesser-known pet. The cat races back indoors, slamming the door on Fred and locking him outside. Fred pounds on the door and shouts, "Wilma!"

Dino factored into many episodes of the show. However, this prehistoric "house cat" could only be glimpsed every once in a rare while — not counting his comical closing-credits moment. Oh, and the joke changed over the years. In the first version, the cat runs back inside, shutting the door on Fred. In the later version, the cat carries Fred outside and plops him on the porch for a taste of his own medicine. You can see how he slightly changes color, too, going from a yellowish coat to orange fur. 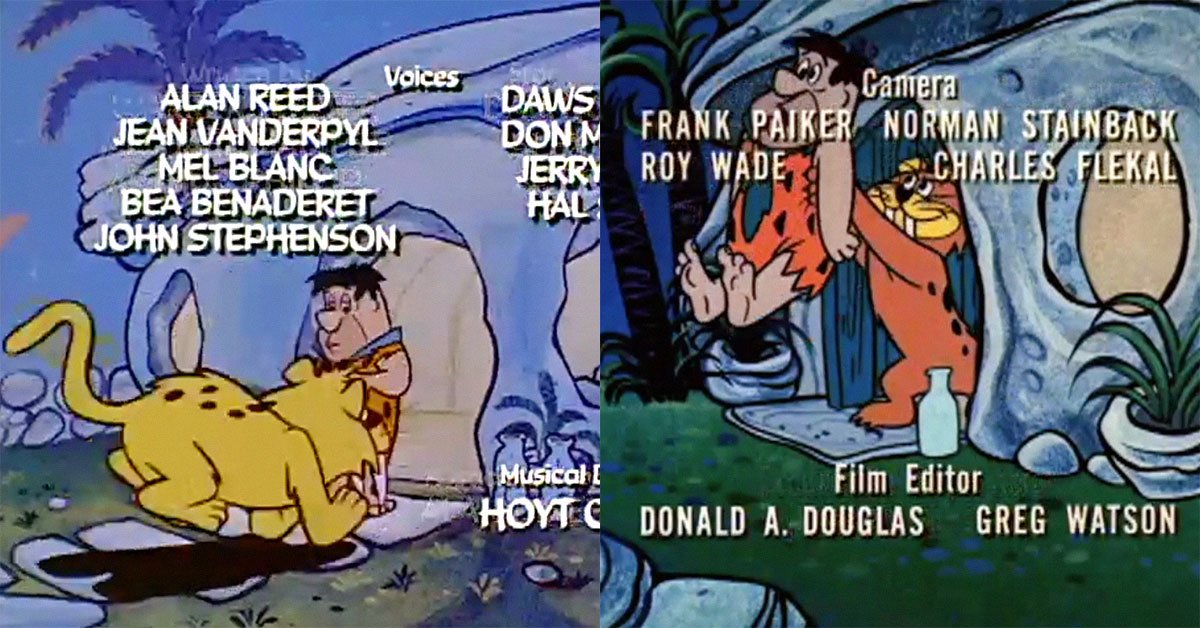 That being said, the cat with plenty of attitude did add splashes of chaos during a handful of Flintstones episodes, too.

You can spot Baby Puss — yes, the saber-toothed cat is named Baby Puss — napping on the floor in "The X-Ray Story" midway through season two. 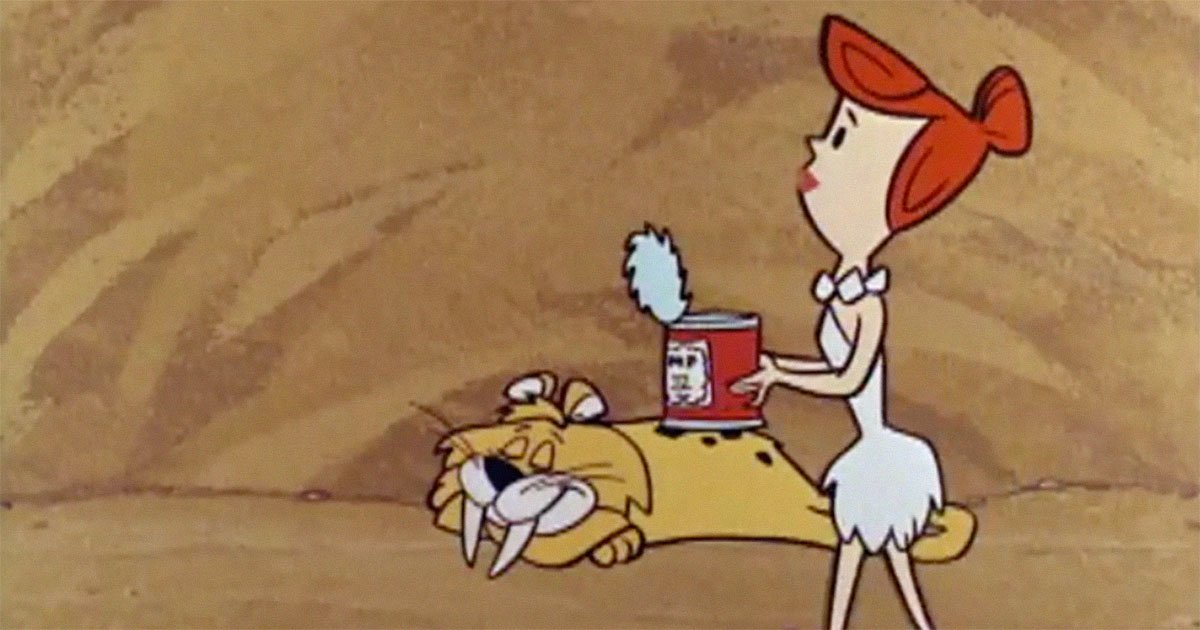 A year later, in the third-season episode "Nothing But the Tooth," Barney has a horrible toothache and Fred is motivated to help him fix it so they can go to a sporting event. One of Fred's schemes involves stringing Barney's tooth to Dino's collar, then setting the cat out, so Dino would chase the cat and Barney's tooth would come out.

Not trusting Fred's caveman logic, Barney chickens out, and it's Fred who ends up dragged behind his house pets, as Dino takes off down the street chasing the cat. The scene ends when Fred gets flattened into a pancake by a steamroller, gifting us with a classic Hanna-Barbera moment.

The next two appearances of the saber-toothed cat come during plots that revolve around Pebbles, starting with her birth in the third-season episode "The Blessed Event." In this episode, Fred is nervously preparing for Pebbles' birth when Dino chases the cat up the tree. Fred shouts at the pets, "I want quiet!" and later, we see the two pets sleeping in the same positions, only now the cat is up on the branch with a sign that says "Meow!" and the dog on the ground with a sign that says "Bark!"

One last appearance of note comes at the start of the fifth season episode "Pebble's Birthday Party." It begins with a night scene where we see the cat sleeps on Fred's stomach as the caveman snores loudly. This snoring eventually sends the cat flying off the bed, resulting in a rude awakening.

In this rare scene, we hear the saber-toothed cat speak, saying, "That's it. I'm turning myself in at the animal shelter. At least I can get a night's sleep!" He then leaves the house, while Dino covers his head trying to block out Fred's snores.

Even though the saber-toothed cat isn't seen much in episodes, the closing credits scene maintains his prominence on the show. He may be rare, but he's part of the family.

SuperRog 19 months ago
I've a number of questions about the opening/closing themes.
Open Credits: Clearly, The Rubbles join The Flintstones at the drive-in movie. (Proof: "Let's ride, with the family down the street....") Fred and Wilma pick them up and everyone piles in the car.
Closing Credits. As the Flintstones leave, the Rubbles are missing. Did Fred get mad at Barney and kick him out, with Betty joining him? Did Barney and Betty take an Uberrock? What?
Perhaps they knew Fred was stopping at that drive-in restaurant and they walked home.
Also in the closing credits, why didn't Fred just climb through the same window the cat used?
These are the questions that keep me up at night.
Like Reply Delete

geatornez82 20 months ago
I didn't know his name until Nestle released Flintstones Push Ups ice cream in the early 1990's. I was about eight years old then. If I remember correctly, the character names were on the tubes as well as the flavor. Baby Puss's flavor was Bedrock Berry.
(more info here https://eightiesbaby.net/2019/12/27/flintstones-push-up-pops-the-dessert-of-kings/)
Like Reply Delete

safeinsanity 32 months ago
Thanks, I always wondered about that cat .. lol
Like Reply Delete

JeffBaker 33 months ago
Maybe that cat finally stayed out for the night!
Like (1) Reply Delete

EmBee 33 months ago
I don't remember the earlier one with the yellowish cat (were there two? did Yellow Cat get hit by a car or run off?). I do remember the latter one and wondered if the cat could jump through the window to get in, why didn't Fred?
Like (1) Reply Delete

AgingDisgracefully 33 months ago
I remember reading the cat was extremely difficult during principle photography.
Like Reply Delete

AnnaRentzVandenhazel 33 months ago
A friend of mine had a Flintstones storybook where the cat had an adventure of his own. And he had a name too - Baby Puss.
Like (1) Reply Delete

cperrynaples 33 months ago
And let's not forget he's in the closing song: "Someday, maybe Fred will win the fight/Then that cat will stay out for the night"
Like (2) Reply Delete

StephenJohnson cperrynaples 33 months ago
Oh and let's not forget the opening theme. The cat is shown getting to the car with Dino, the Flintstones and their friends to go to the theater.
Like (1) Reply Delete

cperrynaples StephenJohnson 33 months ago
Yep and he was in the car before Pebbles and the Rubbles!
Like Reply Delete 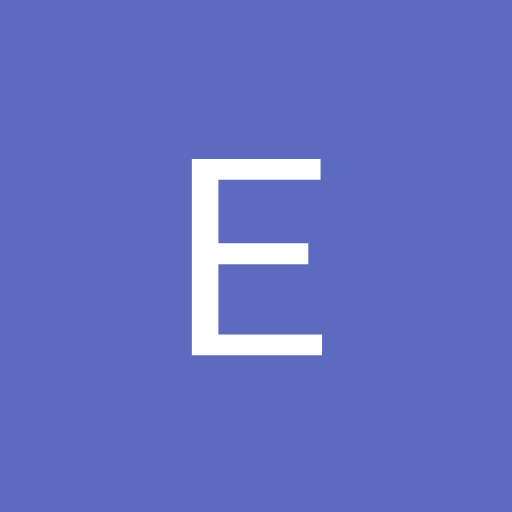 Earl 33 months ago
Often in my 62 years I've wondered this about Kitty Kat. Now hoppy on the other hand was just forced. The show was "classic" in the truest sense up untill Peebles, then bamm bamm, then hoppy. It just went to campy. Needless to say any Flintstones after orgiginal run ended 66 or so, well are just another cartoon series simply set in the storage. Btw the gazoo was pure "lost in space" camp, but I did enjoy him.


I didn't like hoppy. Dint like Peebles or bamm bamm. Otherwise great show made with insperation from the honey mooners.. I love early episodes first year or two. Love when Fred sings " Listen to the mockingbird" anyone know who's sings that? I say Bobby Darrin ?

RobCertSDSCascap Earl 33 months ago
All sources I found say Alan Reed did the singing. 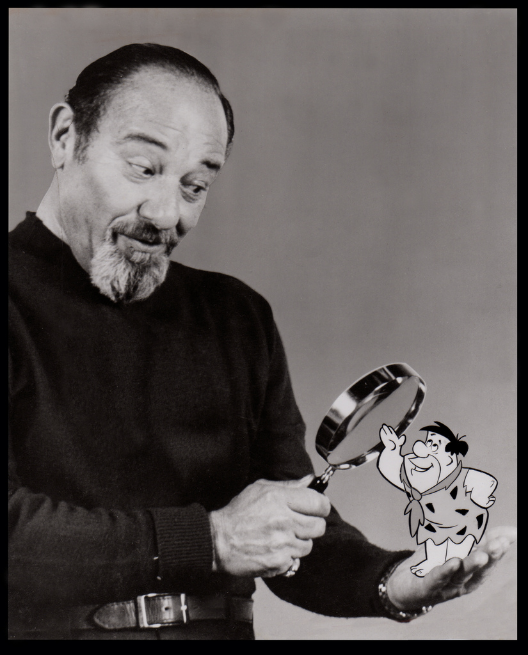 jholton30062 Earl 33 months ago
I think they added Pebbles and Bamm-Bamm to make the show more kid-friendly. ABC might have been the ones who drove that decision.
Like Reply Delete

RobCertSDSCascap 33 months ago
Wilma is feeding Dino a can of Shlump. 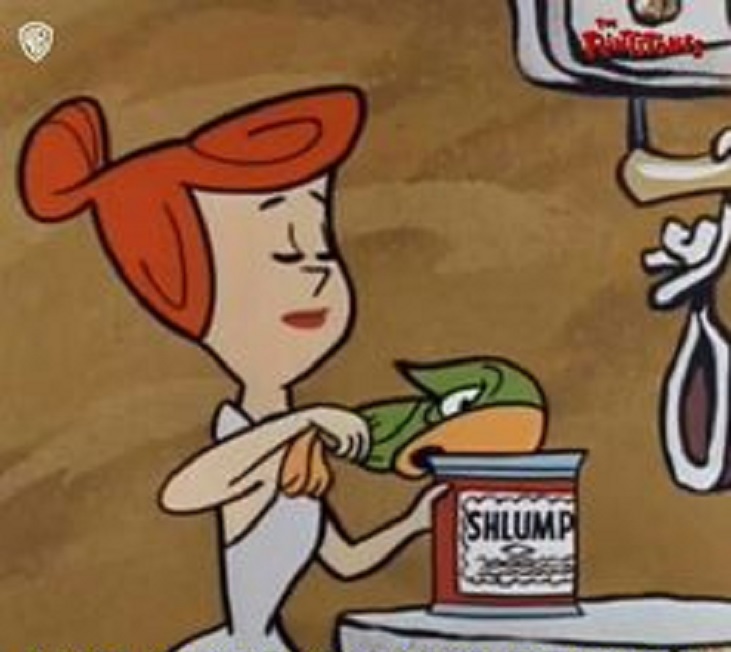 ScarlettKaiju RobCertSDSCascap 33 months ago
While admittedly it's kind of odd, no, not on the original series, or even in the 1995 Cartoon Network Dino and Baby Puss short "Stay Out!" But I would assume it is canon, since that is the name on the animators' model sheets and on merchandise dating back to the 60's, continuing to this very day - Baby Puss and Hoppy were offered as Funko POP! dolls at San Diego Comic Con this summer.
Like Reply Delete

AnnaRentzVandenhazel RobCertSDSCascap 33 months ago
I only saw the name "Baby Puss" in a Flintstones storybook a friend of mine had. Baby Puss had his own adventure but I don't remember the title - "Baby Puss and the ????"
Like Reply Delete

RobCertSDSCascap AnnaRentzVandenhazel 33 months ago
Cool! I went through the same thing here when asked about Marc Anthony and
Pussyfoot. Never remembered her having a name. 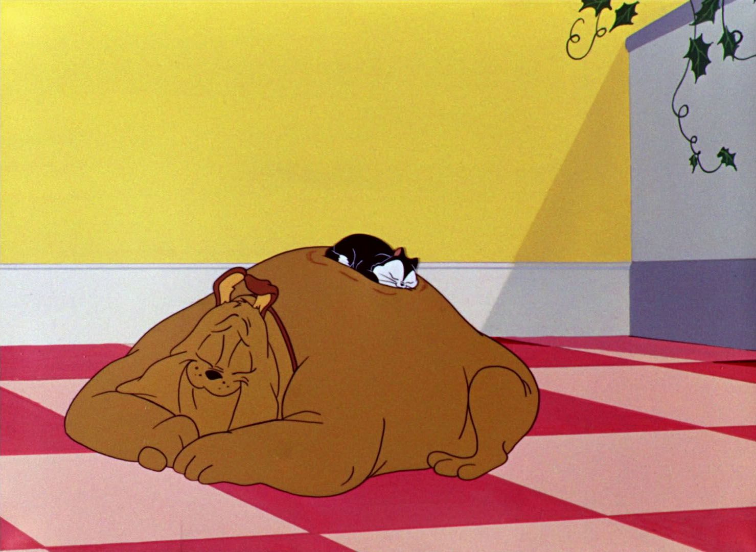 geatornez82 RobCertSDSCascap 20 months ago
I always thought Baby Puss was a male. Live and learn.
Like Reply Delete