Where To Watch Shop Store Contact
Home / Stories / Did Boris Karloff's ''Frankenstein 1970'' bring the first toilet flush to television?
did you know?

When the 1958 film was shown on TV in the Sixties, its use of the sound effect predated All in the Family’s groundbreaking toilet humor. 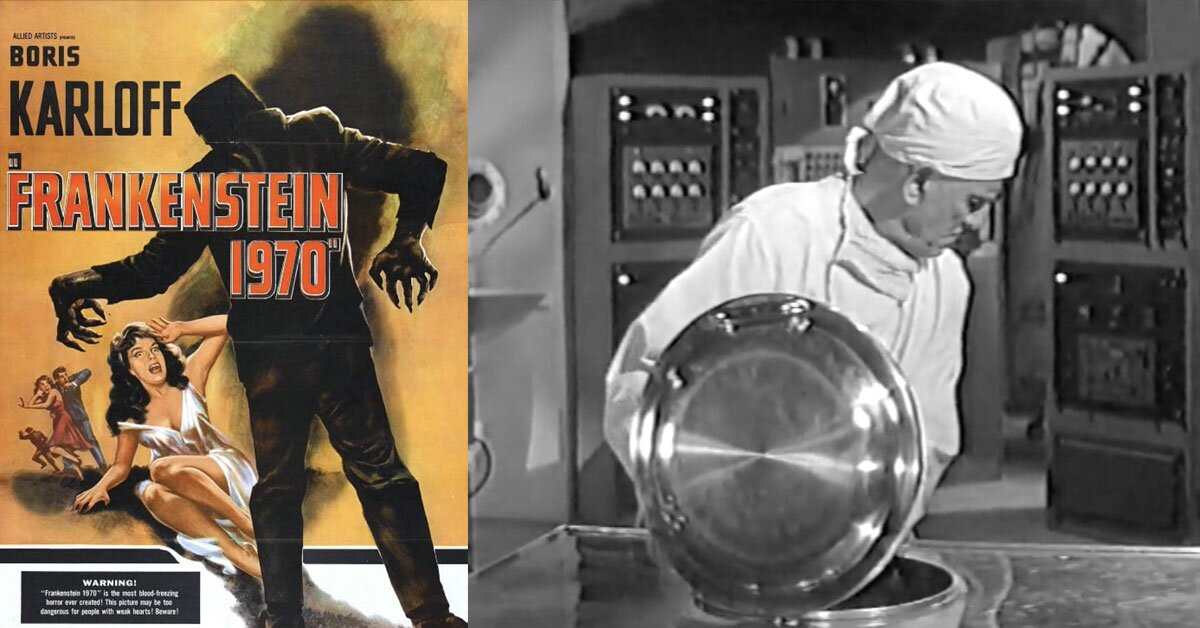 By today’s standards, the censorship on TV in the Fifties and Sixties seems completely overbearing. But the new medium available right in Americans’ living rooms was still figuring out what was palatable for audiences, and evidently erred on the side of caution — extreme caution. We’re pretty sure the public could have handled their favorite characters saying the word “pregnant.”

One seemingly harmless taboo that wasn’t broken until the 1970s was the sound of a toilet flushing. All in the Family is rightly remembered as a show that broached many serious topics, but it was also groundbreaking in sillier ways. Its use of bathroom sound effects acting as hilarious punchlines began right away in the first season in 1971.

Before that, toilets were strictly forbidden on TV. The Brady kids’ bathroom never had a commode and even when a toilet tank was needed for non-bathroom related purposes, like hiding a baby alligator in Leave it to Beaver, nothing except the very top of the porcelain throne could be visible.

So, Archie Bunker’s lavatory sounds were the first to be heard on television. Or were they? 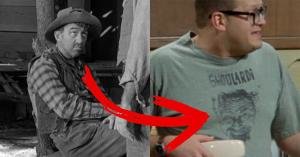 Did you know?
This Gunsmoke extra was Cleveland's beloved horror host Ghoulardi

All in the Family may have been the first TV show to feature the sound of a toilet, but it wasn’t technically the first time a flush was heard over the television airwaves.

It appears that unique honor belongs to the 1958 Boris Karloff film Frankenstein 1970. The horror sequel, Karloff’s fifth appearance in the franchise but first time playing a member of the Frankenstein family, revolves around Karloff as a decendent of the famous German baron with a penchant for bringing corpses to life.

With the money he receives renting out his castle to a film crew, Karloff’s Victor Frankenstein purchases an atomic reactor — it is the far-off future year of 1970 after all — and uses it to bring the dead to life.

As part of his gruesome hobby, Victor needs a way to get rid of the spare body parts he doesn’t use. Good thing he has a giant garbage disposal (seen in the image above) that sounds like a toilet. That’s right, the toilet sound in Frankenstein 1970, potentially the first flush ever heard on TV, is not actually used for a toilet. A grinding noise was originally heard in an early cut of the film but was thought to be too grisly. It was changed to the watery whoosh of a toilet before its release to theaters.

Because of that change, when the film was featured on programs like Chiller Theatre as early as 1962, it more than likely won itself the accolade of first toilet flush heard on television. Of course, there were other movies before Frankenstein 1970 with toilet flushes — sounds that actually indicated bathroom activities, no less. The Grapes of Wrath from 1940 is an early example. If any of those movies were played on TV before Frankenstein 1970, then of course they would take the title.

But because of the many local horror shows, some with hosts similar to MeTV's very own Svengoolie and some without, genre films were much more likely to be shown on television. So, while it's difficult to know for sure, all indications point to Boris Karloff’s evil Baron as the first TV flusher. 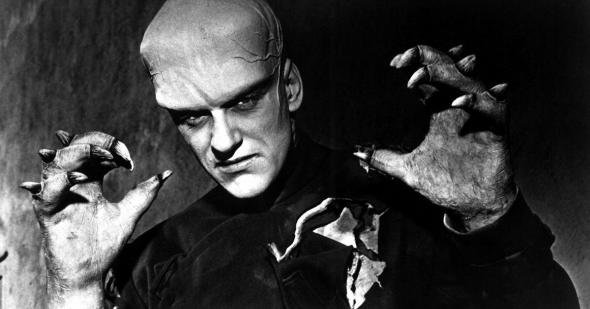 Did you know?
Before he was Marshal Dillon, James Arness was the terrorizing ''giant carrot'' in The Thing 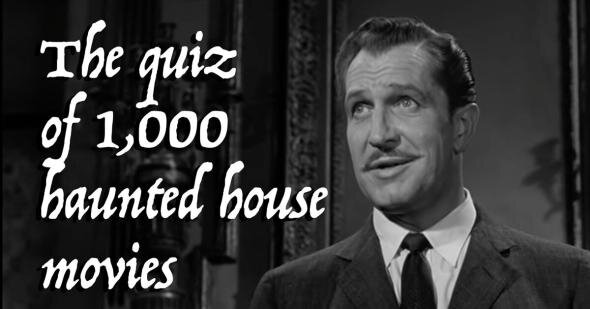 Can you find the ONE fake Vincent Price haunted house movie we made up? 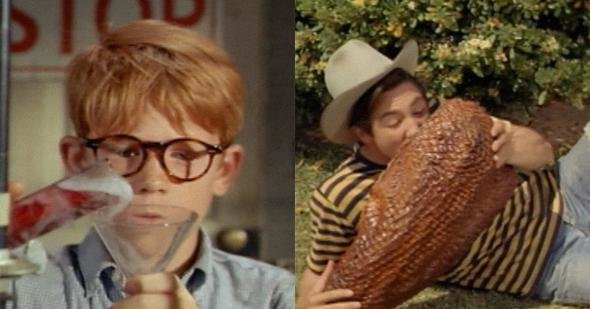 Ron Howard, Johnny Crawford and giant ducks made the kookiest teen movie of the 1960s
Are you sure you want to delete this comment?
Close

RichLorn 17 days ago
When Fonzie jumped the shark I'm certain I heard a toilet flushing.
Like Reply Delete

CaptainDunsel 17 days ago
I can't prove it, but my vote is that it was probably the 1960 film "Dinosaurus" that managed to get the first toilet flush on the air. I say that because it is very clear from the context that it has nothing to do with any bodily functions.
The film has a wonderfully played scene where a Neanderthal man, brought back to life in the present day, along with the titular dinosaurs, explores a modern house and its various contents.
(BTW, I always get this film crossed in my head with that finest in Danish sci-fi film making, 1961's "Reptilicus".)
https://youtu.be/DEm70fUYHS8?t=2459
Like Reply Delete

Runeshaper 17 days ago
Boris Karloff was an AMAZING actor! Love him in everything I've seen him in (-:
Like (1) Reply Delete

Mike 18 days ago
This is about Frankenstein 1970 - the movie itself.
I'm a Fifties Kid from here in Chicago - old enough to remember when this was a new movie.
When it opened here, the ads in the papers made much of the presence - in a leading role, yet - of Tom Duggan, who'd been chased off local tv here after tangling with a powerful judge.
Terrible Tom (as he was known here) went west, and got a TV show there, where he made friends with Hollywood types who got him movie parts - like this one.
I suppose that Tom Duggan's TV show (he was sort of a Fifties Bill O'Reilly, only not as charming) was well before any of the Svengoolie staff were even born.
But I remember, and if I'd been working with Rich Koz, I'd have made a point of telling him ...
Oh well, maybe next time ...
Like (2) Reply Delete

jeanninerobinm 19 days ago
Can Me TV have Ironsides too?
Like Reply Delete

Peter_Falk_Fan 19 days ago
I thought "The Brady Bunch" was the first TV show to feature the sound of a toilet.
Like Reply Delete

Andybandit 20 days ago
I have never seen Frankenstein 1970. I look forward to seeing it on Saturday the 10th. AITF was the first show to hear a toilet flushing. Was Archie Bunker the first guy to be rude to his family and friends on TV.
Like Reply Delete

LoveMETV22 Andybandit 19 days ago
Actually there was a U.K program called "Till Death do Us Part", that was part of Norman Lear's inspiration when creating "All in the Family. The two shows are very similar although AITF was probably the first of that type on American Television.
Like Reply Delete

justjeff 20 days ago
...I'm so pooped reading about toilet sounds. At this point any of my puns would go right down the crapper... So, let's wipe things clean and start over before things tank on us... All this toilet talk has me bowled over... I'm flush with puns, but can't dump enough of them into this response... There sure were enough of them in my water closet to share, but if I get too carried away, someone might get a bit "sewer"... I just couldn't figure out how to work some other "bathroom phrases" into this diatribe, so I'll just close this by "having a seat" and seeing what others folks come up with...
Like (5) Reply Delete
Load previous comments

CaptainDunsel justjeff 17 days ago
Just don't let any of the penguins get on top of the telly. They might explode!
Like (1) Reply Delete

justjeff CaptainDunsel 17 days ago
...then they'd really be "Earth Angels"...
Like (1) Reply Delete

bnichols23 justjeff 15 days ago
"groove listening to The Cleftones" -- I do NOT believe you just said that....
Like Reply Delete

MrsPhilHarris 20 days ago
I don’t remember this movie. 🤔
Like Reply Delete

justjeff Mitchell 17 days ago
Naw... he crapped out at the last minute!
Like Reply Delete