Where To Watch Shop Store Contact
Home / Stories / Danny Dayton was uniquely qualified to play Fast Freddie on M*A*S*H
Did you know?

We dug up the rare backstory on how the naturally funny character actor rose to fame.

"You wanna talk about Army food?" Fast Freddie asks, setting up a joke in the M*A*S*H episode "That's Show Biz."

"Don't tell me you think that guy is funny?" Hawkeye asks Winchester incredulously.

Winchester quickly regains his composure to insist, "He's the worst comedian I ever heard in my life."

For the role of Fast Freddie, M*A*S*H cast one of comedy's most endearing talents, Danny Dayton. Not much is known about Dayton, so we thought it would be fun to dig in and better get to know "the worst comedian" to ever crack up the usually composed Winchester.

Dayton started acting somewhat late in his life. Before he decided to be an actor, he went to school for journalism, and then after graduating college, instead of being a reporter, he joined the Army.

It was only after he returned from service in 1946 that Dayton, who had gotten a taste for performing in the Army, decided to try acting for real. Soon, both he and his wife had worked out theater and nightclub acts, and they moved their family to Hollywood.

"I went to do a comedy role and stayed out there for three years playing gangsters," Dayton joked to The Atlanta Constitution in 1966.

Dayton didn't want to settle for just playing gangsters. He knew he should be getting laughs.

His wife, Arlene Dayton, insisted he was a perfectionist who was born for comedy.

"He thinks funny," she said. "He's a very bright man and is always on top of a situation."

Fortunately for Dayton, it was his perfectionism that led him back to the laughs.

Danny wanted to understand everything about show business, so he went back to school and started studying TV production, directing, and basically taking classes in any subject remotely connected to the industry. Then, he applied to be a director for a new comedy show featuring funnymen like Joey Bishop, Morey Amsterdam, and Paul Winchell as panelists.

The show was called Keep Talking, and instead of hiring Dayton as a director, they asked him to be the moderator of all these hilarious comedians.

Amsterdam once described the show as the perfect platform "where a man who makes his living being funny can sharpen his ad-libs and test his inventiveness making up a story."

Take a moment now and think of your favorite Fast Freddie pun from M*A*S*H. On Keep Talking, that's arguably where Fast Freddie was born.

Then, in 1955, Dayton got his biggest break when he got cast in the movie Guys and Dolls as Rusty Charlie, one of those sidekick roles that only really work if the actor playing the character is naturally funny.

In that role, Dayton proved on his biggest platform yet how funny he was, and soon he was cast on comedy shows like The Phil Silvers Show and Gomer Pyle, U.S.M.C., in addition to juggling roles on dramatic shows like Charlie's Angels and Wonder Woman.

He was very prolific, and then he landed the recurring role of Archie's pal Hank Pivnik on All in the Family. After that, classic TV audiences started recognizing his name.

Dayton appeared on M*A*S*H shortly after he stopped appearing on TV as Hank Pivnik, and then continued appearing in TV shows and movies through 1999, when he passed away.

His wife knew he was built for those uniquely funny roles like Fast Freddie, roles which almost wouldn't work with anyone else.

"He puts everything he has into each performance, no matter what the show," Arlene said. "The audience feels cheated if you feel the performer isn't doing the best he can. Some actors lie down on the job. Danny generally tries to do the best he can and also tries to get the highest caliber acting out of the other performers." 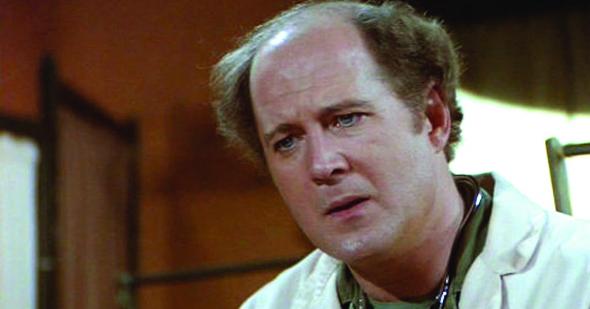 Did you know?
Before M*A*S*H, David Ogden Stiers sustained a brutal injury that nearly ended his acting career

Did you know?
Of course, teenage Alan Alda plotted the perfect revenge against high school bullies
Are you sure you want to delete this comment?
Close

Michael 17 months ago
I always thought he looked like Casey Kasem. I know one time I looked, because I was sure it was him.
Like Reply Delete

TheSentinel Michael 17 months ago
First time I saw him on that M*A*S*H two-parter, I mistook him for Sid Melton, who he looks a lot like.
Like Reply Delete

Spiro 17 months ago
He and Klinger were like a vaudeville act together.

What do 2 drunks do when they meet on the street?


They both start shacking all over.

soundboy 17 months ago
I should have identified myself. I'm his son.
Like (1) Reply Delete

Andybandit 17 months ago
Interesting story even though I don't know who Fast Freddie is on Mash.
Like Reply Delete

Zip Andybandit 17 months ago
Do you remember Shecky Lewis on Mama's Family? Danny Dayton also played him on the episode where Mama tries her hand at stand-up comedy and he is the MC.
Like Reply Delete

Mike 17 months ago
History Time:
On Keep Talking, Danny Dayton wasn't the moderator - he was one of the panelists.
I remember this show from when I was a kid, circa 1958 (after Guys And Dolls).
Keep Talking was a game, where the comics would have to adlib their way through a shaggy-dog story, meanwhile trying to sneak a gag phrase into what they were saying.
There were two teams competing, and when the story ended, one team would have to guess the phrase that the talker from the other team had used.
They went through several moderators; the one I remember was Carl Reiner (who was replaced by Merv Griffin when Keep Talking moved from CBS to ABC).
That I recall all of this, 60+ years after the fact ...
Like Reply Delete

soundboy Mike 17 months ago
He was also the producer on the show, and auditioned and approved who was on the panel. They rotated moderators. Not the first show he produced or directed. He also produced and directed "Dagmar's Canteen". A live TV show with his first wife, Dagmar (Not my mother). Before that, he was on Uncle Miltie's show, Colegate Comedy Hour, Mack and Meyer For Hire, etc.... Also on "Coast To Coast" with Murrow.

Mike soundboy 17 months ago
Thanx to Mr. Soundboy for your intel about your dad's role in Keep Talking.
I was, as I said, just a kid when that show was on; I never got to see the credits.
(You wouldn't happen to know if there are any extant kinescopes of Keep Talking still around after all these years? Even when I was a little kid, I thought it was a pretty funny show ...)
Like Reply Delete

soundboy 17 months ago
I wish someone had contacted me about this story. Much of it is incorrect.
Like (1) Reply Delete

dangler1907 soundboy 17 months ago
Who could know that you existed or that you were the genuine article? Contact METV, prove who you are, and I'm sure they'd be glad to talk.
Like Reply Delete