Would you believe… 17 super intelligent facts about 'Get Smart'

Get smart about 'Get Smart.' Learn how Andy Warhol, Spider-Man, Inspector Gadget and White Castle relate to the 1960s sitcom. 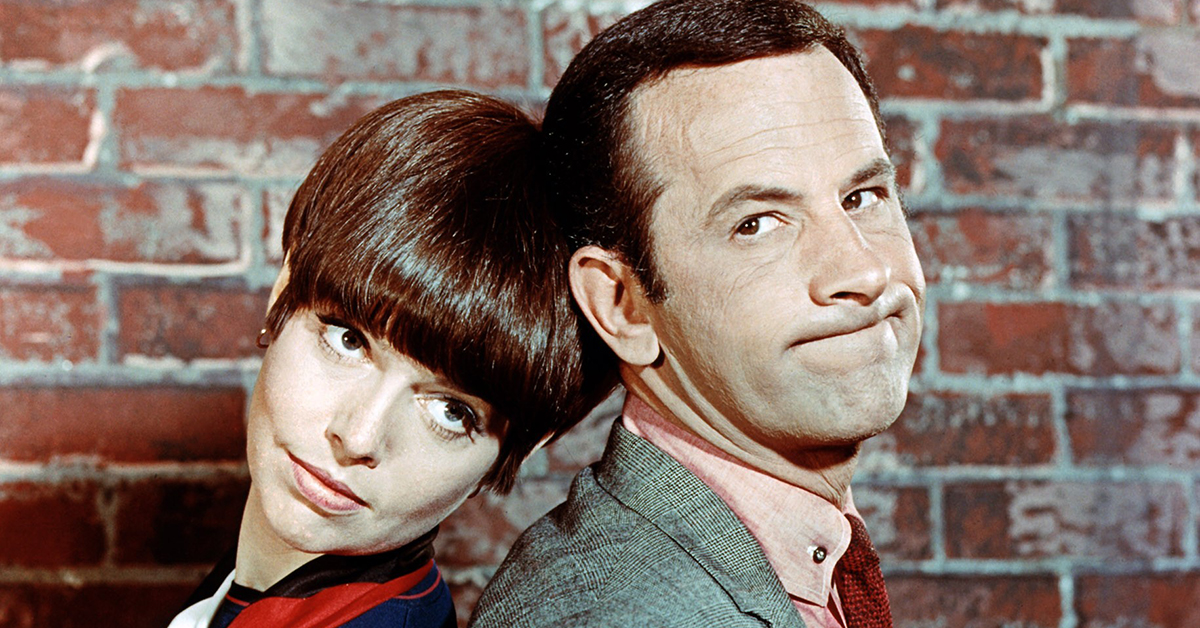 By the mid-1960s, the spy craze was climbing to its peak. James Bond was well on his way to his fourth big-screen mission. Napoleon Solo teamed with Illya Kuryakin in television's The Man From U.N.C.L.E. Boys around the country were playing pretend Cold War with their Johnny Seven O.M.A. toy guns.

Groovy, lighthearted spins on the genre — the kind that inspired Austin Powers — such as Dean Martin's Matt Helm movies or James Coburn's In Like Flint were just around the corner. Yet it was Get Smart that opened the doors to the spy parody.

Mel Brooks and Buck Henry created their irreverent, uproarious sitcom in 1965. Get Smart would deliver infectious catchphrases and nifty gadgets. There were villains, cool cars, shoe phones, beauties, puns and an android named Hymie. Don Adams and Barbara Feldon made a perfect pair as Maxwell Smart and Agent 99.

In the years to come, there would be many knock-offs and remakes. The original Get Smart still stands as the best spy comedy. Here are things you might not know about the series.

1. Tom Poston was close to being cast as Maxwell Smart. 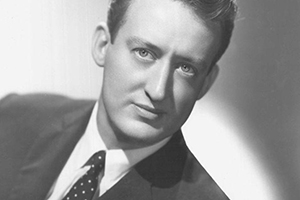 When Mel Brooks presented the pilot script to ABC, the network set its mind on Tom Poston as the star, enamored with his work on The Steve Allen Show. Additionally, the executives tried to soften the show by asking for a family vibe, with Max's mother and a cute pooch. These creative differences led to the show landing at NBC instead, and Poston was lost in the shuffle, according to the book It's Good to Be the King: The Seriously Funny Life of Mel Brooks. Poston did fine for himself, though, becoming a beloved part of Newhart.

2. Fang the dog was written off the show. 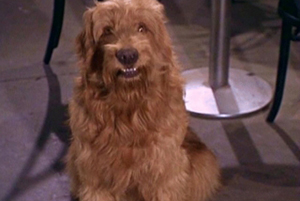 The snarky Brooks did add a dog at the behest of the network, though the creators named the hound Fang and gave him a shaggy and snarling look. That did not stop the pooch from becoming a favorite, as he showed up on the cover of many Get Smart comic books. (More on those below.) However, the animal proved to be too difficult and expensive to direct so Agent K-13 was written off the show early in season two.

3. CONTROL and KAOS are not acronyms. 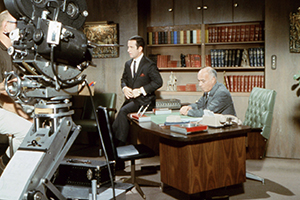 Ever wonder what CONTROL and KAOS stand for? Nothing! Though KAOS was "A Delaware Corporation" for tax reasons.

4. Max drove a Ferrari, a Sunbeam, a Volkswagen and an Opel. 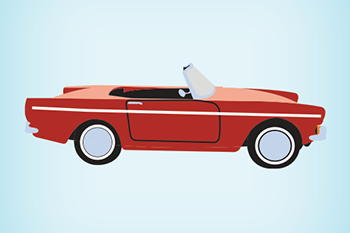 What is a spy without a sweet ride? The cute red Sunbeam convertible seen in the credits of the first two seasons is most associated with the show. However, in the pilot, Max whipped around in a Ferrari 250 GT PF Spider Cabriolet. In season three, Volkswagen became a sponsor of the show and Max switched to a curvy blue Karmann Ghia. Finally, in season five, Buick took over sponsorship and Max had a roof over his head on the road with a sporty gold Opel GT. In season four, Max also gets to cruise in a Citroën and a Ford Mustang. 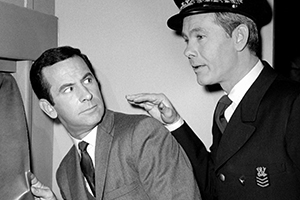 The talk show legend made a mere handful of television acting roles outside of The Tonight Show, yet he took time to appear as a train conductor ("Aboard the Orient Express") and a king's herald ("The King Lives?") for Get Smart. 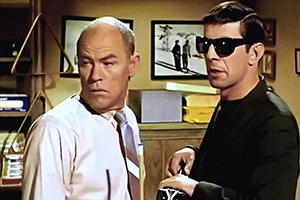 Many comedians lined up for bit roles. Burnett, Don Rickles, Steve Allen, Bob Hope and Buddy Hackett all turned up, just to name a few. Stars of Batman and Star Trek showed their faces, too, names like Nimoy, Julie Newmar and Cesar Romero. 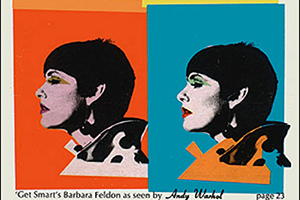 How awesome were the 1960s? You had genius artists making covers for the TV Guide. Warhol put profiles of Feldon on fields of orange, yellow, red and blue for the cover of the issue from March 5–11, 1966.

8. The show spoofed everything from James Bond to Alfred Hitchcock. 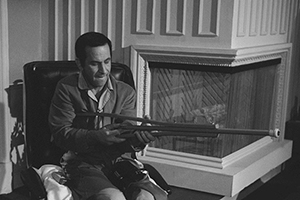 In episodes like "Greer Window," "Bronzefinger," "Tequila Mockingbird" and "Die, Spy," the sitcom skewered everything from classic films to iconic novels to its competition. Here are our 10 favorite spoofs from Get Smart. 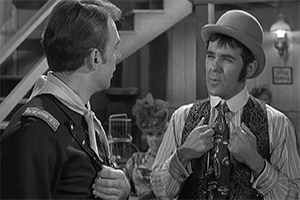 Like all good satirists, Get Smart was up for a little ribbing itself. In the season one F Troop episode "Spy, Counterspy, Counter Counterspy," Pat Harrington Jr. plays "B Wise," a clear parody of Don Adams on Get Smart. It's no wonder — the shows have a connection. Early in his career, Don Adams was in a comedy team dubbed The Young Brothers with Jay Lawrence, the younger brother of F Troop star Larry Storch. 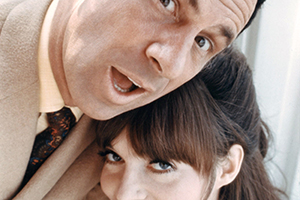 Not even the duo's eventual marriage spilled the beans on Agent 99's real name. What are your theories?

11. The 'Get Smart' comic book featured artwork by a legend 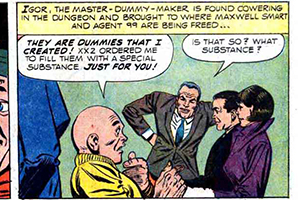 Dell Comics published eight issues between 1966 and 1967. Steve Ditko, co-creator of Spider-Man and creator of Dr. Strange, penciled some of stories. 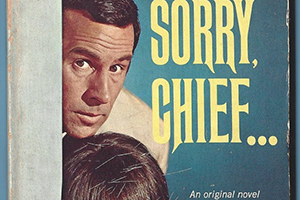 William Johnston, who also penned Happy Days, Monkees and Munsters novels, churned out capers with titles like Max Smart and the Perilous Pellets and Max Smart — The Spy Who Went Out to the Cold. 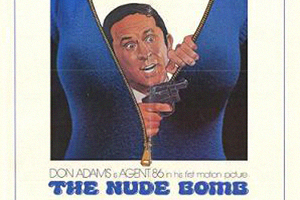 The Nude Bomb is easily forgotten as it was, indeed, a bomb. The comedy would earn a nomination for the Golden Raspberry Award for Worst Picture but eventually lose to the Village People movie. Perhaps part of the failure was due to the unexplained absence of Feldon and her Agent 99. This time out, Max was working for PITS, an agency that was an acronym, Provisional Intelligence Tactical Service.

14. Don Adams was the voice of Inspector Gadget. 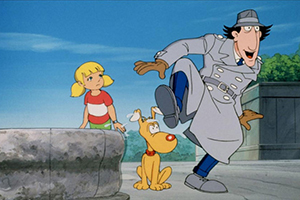 Adams provided the perfect voice for the bumbling bionic hero, who was clearly inspired by Max Smart. The actor would deliver some of his classic catchphrases — "Would you believe...?" and "Sorry about that, Chief" — on the 1983 cartoon. 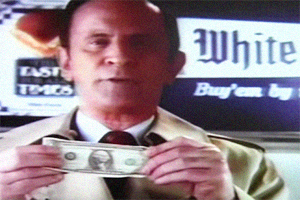 "Would you believe…? A fish sandwich and a regular order of fries for just 99¢!" Adams used his catchphrases to sell everything from hamburgers to rental cars to auto parts to Toyotas.

16. 'Get Smart' was the first television franchise to air episodes on NBC, CBS, ABC and Fox. 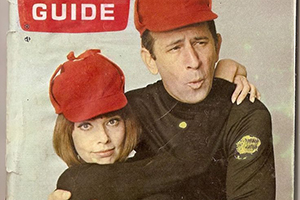 Beginning on NBC, the show jumped to CBS in its fifth and final season. The 1989 reunion movie Get Smart, Again! aired on ABC. And, finally, we have this forgotten reboot… 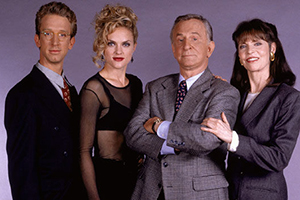 Fox half-heartedly attempted to revive the franchise with Get Smart in 1995. Dick portrayed Zach Smart, son of Max and 99. The show ranked 133rd out of 142 series and was swiftly canceled after a handful of episodes.

Kaegen12 21 months ago
This is my No. 1 most wanted show on Metv. And if they fit the network's basic direction, I would add Benny Hill and The Young Ones.
Like Reply Delete

djw1120 25 months ago
"Would you believe" that it's NOT on MeTV on Sunday at 2:00AM
Of course, if they would put it on, then I would set my DVR for it.
BTW, I remember Don Adams as the voice of "Inspector Gadget"
Like Reply Delete

LenVishnevsky 26 months ago
99 said her real name was Susan Hilton, though it's suggested she was lying.
Like Reply Delete

djw1120 LenVishnevsky 25 months ago
Sorry.
My mom knew Barbara Feldon (she had business dealings with her - my mom was a real estate broker) and they never revealed "Agent 99's" real name.
Like Reply Delete

CurtisW 29 months ago
Need to get the rights to broadcast this ME classic.
Like Reply Delete

djw1120 CurtisW 25 months ago
You're right.
I wish they would too.
If they did, then I would set it up on my DVR.
Like Reply Delete

Runeshaper 37 months ago
Lots of fun facts! Thanks for sharing. I believe I remember that NB movie. Wasn't so hot. Don't recall the reunion. I vaguely remember the reboot. Sure do miss seeing Agent 86, Agent 99, the Chief, K-13, and many others from the show at their best! :)
Like Reply Delete