Why was the country so obsessed with streaking in the 1970s? 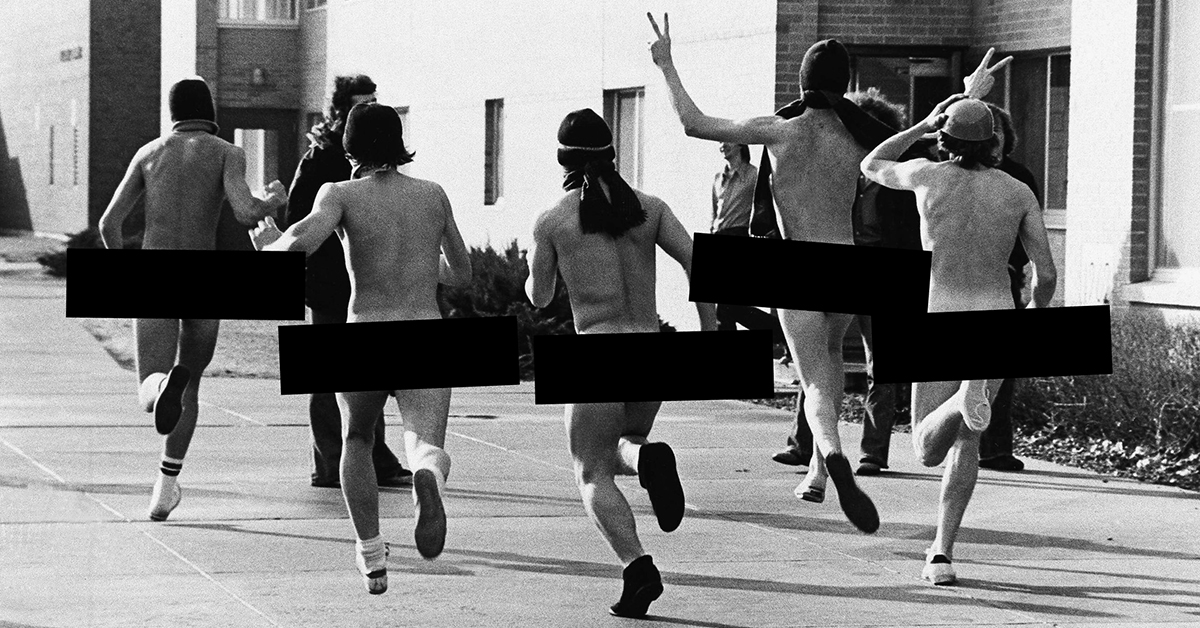 There's no delicate way to put this. Running around naked in public was one of the biggest and strangest trends of the 1970s. The behavior swept across sporting events and college campuses, peaking in '74. The craze led to novelty pop songs, magazines, gag gifts and presidential watches. Fans of jogging in the buff could collect buttons, patches, coffee mugs and T-shirts emblazoned with catchphrases like "Keep on Streaking." 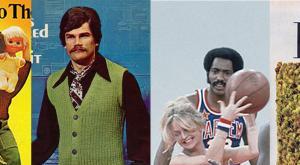 Students at Notre Dame held a "Streakers' Olympics" on campus in 1972, while a streaker interrupted the real Olympic Games in Montreal in the Summer of '76. There were "Streaker Happenings" at esteemed schools like Syracuse. One scholarly study estimates approximately 1,000 streaking incidents on American college campuses at the time. The counterculture movement was predominantly perpetuated by young white men, and many have considered streaking as a reaction to the social unrest and social justice movements brewing on campuses at the time.

Of course, no streak gained more attention than the incident at the 46th Academy Awards in 1974, when host David Niven brilliantly joked, "Isn't it fascinating to think that probably the only laugh that man will ever get in his life is by stripping off and showing his shortcomings."

Whatever the reason, it is undeniable that streaking was bizarrely massive. Let's take a look at some of the goofier evidence of this, er, "flash" in the pan. 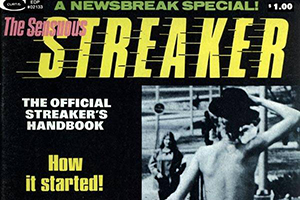 Marvel Comics published its tongue-in-cheek manual for streaking under its magazine publishing arm, Curtis Magazines. The guide featured sections such as "Chapter 4: How to Streak," and featured quotes from nudists. "Nudists wouldn't be caught dead streaking," huffed a spokesman for the American Sunbathing Association. "We're the last of the prudes." 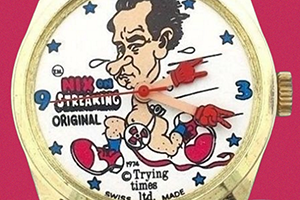 A caricature of the 37th POTUS was shown tastefully covered up with a reel of audio tape in this 1974 timepiece. 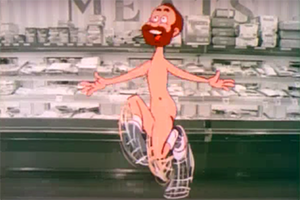 He was "always making the news, wearing just his tennis shoes." This novelty song rocketed to the top of the charts, providing comedic country singer Stevens with his second Billboard No. 1. Yet "The Streak" was just one of a slew of streaker songs, and the most popular. The 1974 smash overshadows other oddities from the year like Larry Black's "One, Two, Streaking," the Four Guys' "Streakin' with My Baby," Rick Springfield's "Streakin' Across the U.S.A." and, of course, the Streakers' "Streakin', Part 2."

This pinback button was sold in 1973. The big question is: Where did you wear it? Your socks? 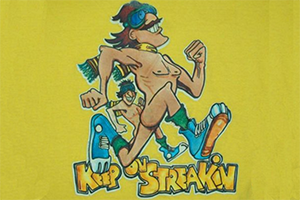 This top traces back to 1974. Again, if you were wearing it, you were a bit a hypocrite, no?