The charts were a spooky mix of blue, green, lemon and "beinz." 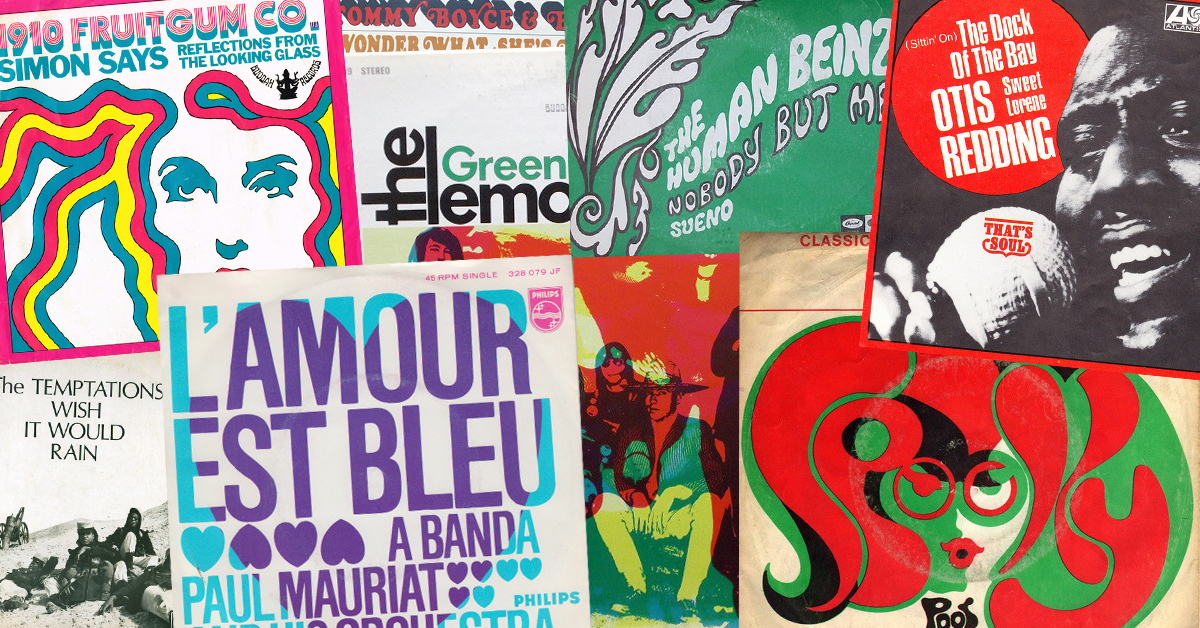 Ah, just look at those record covers, a swirl of primary colors. The Sixties peaked in 1968, in a sense. So much associated with the decade — hippies, social unrest, psychedelia, flower power, Vietnam, the Apollo program — came to dominate pop culture and news headlines. In short, it was the year the Beatles wrote, recorded and released "Revolution."

That being said, "Revolution" did not crack the Top 10 on U.S. pop charts. The songs below did.

The following ten tracks topped Billboard's Hot 100 in late February 1968. It's a weird mix than you might expect, even by 1968 standards. One-hit wonders, bubblegum rock, film themes, stone cold soul classics and syrupy instrumentals all rubbed shoulders. Let's take a look and listen.

Easy listening, at the peak! Paul Mauriat's familiar lilt holds a special distinction, and not just for being an instrumental at No. 1. It is the only song by a French artist to top the Billboard Hot 100. Alas, Daft Punk's "Get Lucky" could only manage to make it to No. 2 in the States.

2. Dionne Warwick - "(Theme From) Valley of the Dolls"

The bestselling 1966 novel and hit 1967 film Valley of the Dolls continued to dominate all media with this lovely ballad. It was like the Fifty Shades of Grey of the 1960s, which would make Dionne Warwick the Beyoncé of the decade. And that's about right.

This list is filled with songs that ring a bell — performed by forgotten bands. Though it reads like a volume of greatest hits, Classics IV was indeed the group's name. Was there a more "1968" lyric than the rhyming of "groovy" with "movie"? The slinking rhythm did indeed groove, especially when the sax solo breezed in.

We are now firmly in the soul section of this Top 10, where its strength lies. This melancholy strut opens with the sound of screaming seagulls and climaxes with a gale of strings.

Far and away the biggest song here, "Dock of the Bay" shockingly peaked at No. 5. This was its best week on the charts. Who needs chart validation when you have Redding's sweet, sweet voice. And those whistles. It beats meditation. They melt us every time.

The Archies may have had "Sugar, Sugar," but the cartoon band did not corner the market on candy pop hooks. If the band's name did not make 1910 Fruitgum Company the ultimate bubblegum act, the ba-ba-ba's of this chorus sure did.

Ah, there it is. There's the sitar. After George Harrison and the Kinks introduced the classical Indian instrument to Western pop, it quickly became the signifier of a "far out" band. The Lemon Pipers sure sounded British, but were in fact from southwestern Ohio. Buddah Records mined the state for inoffensive psychedelic acts like these guys, as well as the Ohio Express.

Are you Monkees fan? Well, you're secretly a Boyce & Hart fan. The duo had penned "(Theme From) The Monkees," "Last Train to Clarksville" and several other early smashes for the TV band, before deciding to make a name for themselves.

Here's some harmonic pop for parents who thought the Beach Boys were too dangerous with all that car talk. Even by 1968, the Fifties had not yet been extinguished. This clean-cut trio had already released sixteen sweet albums before cutting this live record.

This is another one of those cases where everybody has heard the song, yet no-no-n-no-n-no-no-n-no-no-nobody remembers the band itself. Were the Beinz the first popular act to pluralize its band name with a "Z" at the end? Perhaps! "Nobody But Me" proves that the post-"Twist" fad of dance-craze singles had not yet died down.