Golly! This beloved Jim Nabors sitcom was more important than you might imagine. 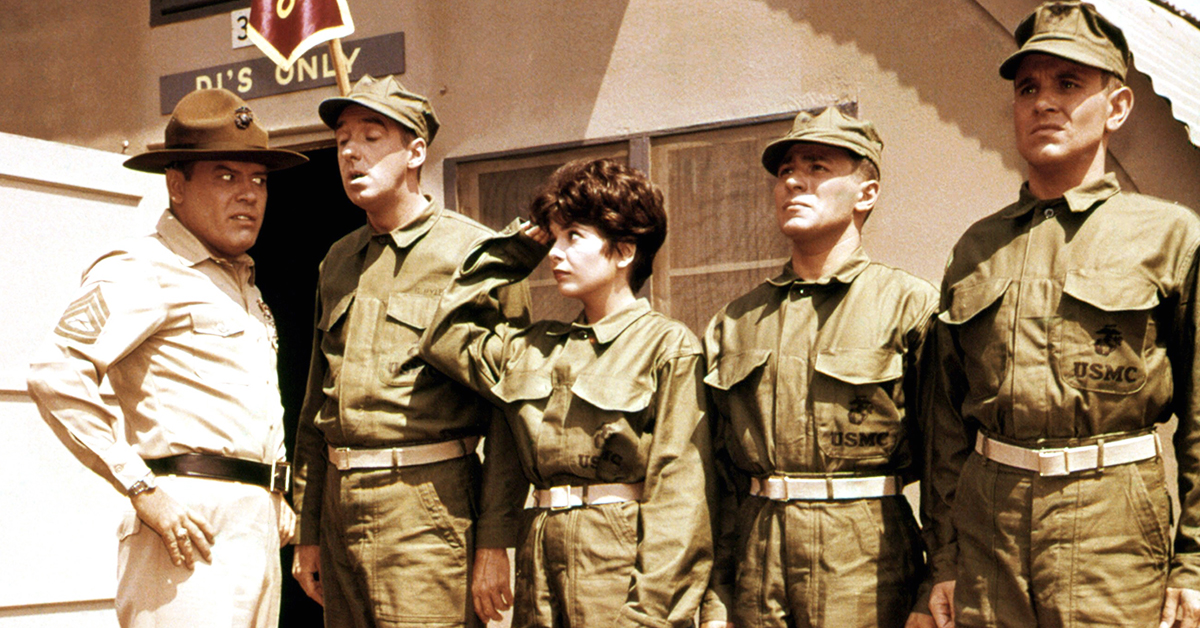 Golly! Few television characters were more beloved in the 1960s than Gomer Pyle. The Mayberry native went from a gas station employee to an enlisted man, first appearing on The Andy Griffith Show in 1962 before heading to California for his own show. Played by Jim Nabors, Gomer was a sweet, slack-jawed simpleton that anyone could relate to. He also had a surprisingly tender tenor singing voice.

Set your bugles. Let's celebrate this charming series with some fascinating facts. 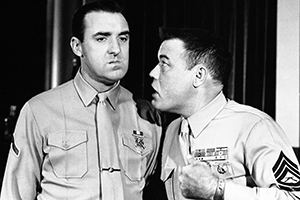 The characters from The Andy Griffith Show were first introduced to American audiences in a 1960 episode of The Danny Thomas Show (Make Room for Daddy), "Danny Meets Andy Griffith." It was more of a marketing maneuver, but technically that makes Andy Griffith a spin-off. The pilot episode of Gomer Pyle arrived as the season four finale of Andy Griffith in 1964.

2. It also had roots in an Andy Griffith movie. 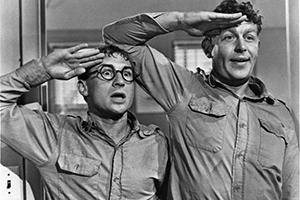 Griffith first explored the relationship between a Southern rube and a tough sergeant in the 1958 film No Time for Sergeants, which co-starred Don Knotts. While not directly related to Gomer Pyle, there is definitely DNA shared between the two projects.

3. The production had full access to genuine military equipment.

Southern California's Camp Pendleton served as the location for the show's fictional Camp Henderson. Because of its positive portrayal of the Armed Services — the show consciously avoided any reference to the Vietnam War — the production was granted use of whatever military gear it might need. No wonder those mortars look so real.

4. It was incredibly popular, right up until the end.

The show finished outside the top three only once in its five-year run, when it slipped to No. 10 in the Nielsen ratings in 1967. Yet it bounced back strong, gaining some of its best ratings in its final season. In fact, Gomer Pyle was the second most watched show in television when it shut down.

After CBS's Gomer slipped to tenth in the ratings, NBC saw an opportunity to schedule its struggling Star Trek against it. The network moved Kirk and Spock from Thursday evenings to Fridays, head-to-head with Gomer in the 8:30PM slot, thinking Star Trek would find an audience. The competition only helped to give Gomer its second wind, as it climbed back to No. 3. After the drubbing, Trek voyaged to the "graveyard slot" on Fridays at 10PM for its third and final season.

6. Jim Nabors is an honorary Marine and Gomer has recently been promoted twice. 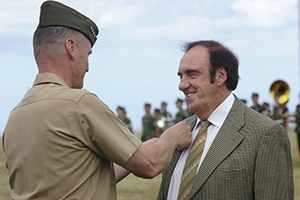 That's Corporal Gomer Pyle, now. To honor Gomer, the Marine Corps promoted the character to lance corporal in 2001 and again to corporal in 2007, thanking him for his contributions to the public image of the Marines. Additionally, in 2001, Nabors was made an honorary member of the U.S.M.C. Gomer Pyle, U.S.M.C. paved the way for other Marines series such as Black Sheep Squadron and Major Dad.

7. Frank Sutton was a black belt in judo and served in the Army.

As Gunnery Sergeant Vince Carter, Sutton set the mold for the hard-as-nails, shouting drill sergeant so common to military narratives. Ironically, in real life, the actor failed a Marine physical and instead served in the Army during WWII, where he proved himself in taking part in over a dozen assault landings around the Philippines. He also had a black belt. That's some man. Sadly, Sutton passed away too soon at 50 from a heart attack.

8. Jim Nabors recorded a soundtrack for the show. 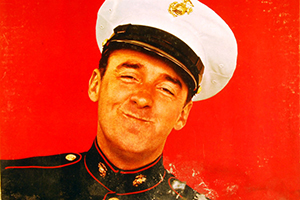 Nabors has released dozens of albums over the decades, belting out country and standards, but his recording career began in 1965 with the Gomer Pyle U.S.M.C. record, which featured tunes such as "You Can't Roller Skate In A Buffalo Herd" and "Hot Dog Heart."